The "Nyarko-san" Chronicles: What is the Cthulhu Mythos?

Jason Thompson begins his series on H.P. Lovecraft and anime 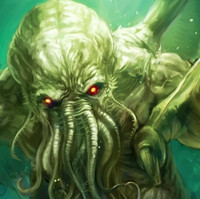 According to an anime producer I once talked to, 50% of Americans have heard of the name "Cthulhu" or the Cthulhu Mythos. Whether or not this is true, it's way more popular today than it was when its creator, H.P. Lovecraft, was alive. Born in 1890, H.P. Lovecraft was a young hikikomori (he never finished high school and spend the six years after he should have graduated living with his mother), a big participant in Amateur Journalism (the Edwardian Era's equivalent of dojinshi), and the most influential horror writer of the 20th century.

Before H.P. Lovecraft, horror writers usually set their stories in the framework of religion and the supernatural—holy water hurts vampires, priests fight demons, etc. But in Lovecraft's stories, especially The Call of Cthulhu, The Dunwich Horror, The Colour out of Space, The Whisperer in Darkness, The Shadow over Innsmouth and At the Mountains of Madness, he created a universe in which human beings are little more than bugs, helpless against the powers of alien entities from the far reaches of space, the depths of time, and other dimensions beyond our perception. Lovecraft's interest in science (especially archaeology and astronomy) gives his stories a feeling of science fiction horror. In Lovecraft's world, even the slightest contact with the alien minds is often enough to drive human beings into raving, alien-language-babbling madness. Iä! Iä! Cthulhu fhtagn! 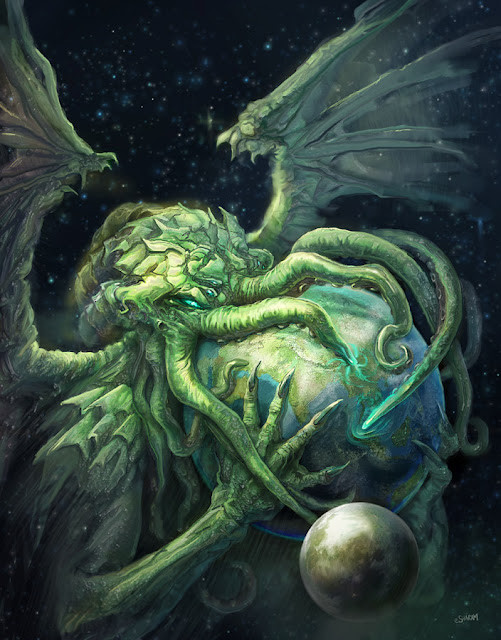 Among H.P. Lovecraft's creations are the gigantic octopus-headed psychic space alien Cthulhu; the Necronomicon, the ancient tome of evil magic that has appeared in lots of movies and inspired several hoaxes; the imaginary New England towns of Dunwich, Innsmouth and Arkham; and of course the shapeshifting evil god Nyarlathotep, the star of Nyaruko-chan! Lovecraft was friends with several other pulp magazine writers, including Robert E. Howard (creator of Conan) and Clark Ashton Smith, and one of their hobbies was inserting references to one another's creations into their own stories, so that, if you were an unsuspecting horror magazine reader in the 1920s, you might think that things like the Necronomicon actually existed. 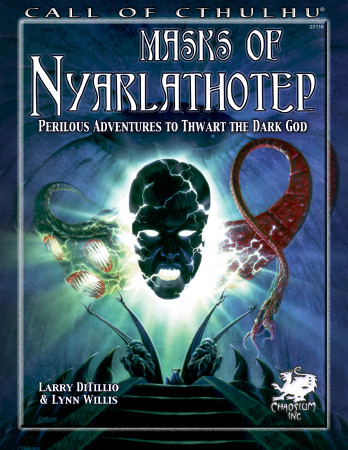 Lovecraft's friend August Derleth came up with the name "Cthulhu Mythos" for this shared universe, and invented his own Mythos creatures, such as the fire-god Cthugha, the mysterious Hastur, and others. Derleth also printed the first book collections of Lovecraft's stories starting in 1939, although it was too late to help Lovecraft as he had already died of stomach cancer in 1937 at the age of 46, brought on by poverty and possibly by his habit of eating mostly junk food like coffee, doughnuts, french fries, spaghetti and canned chili. 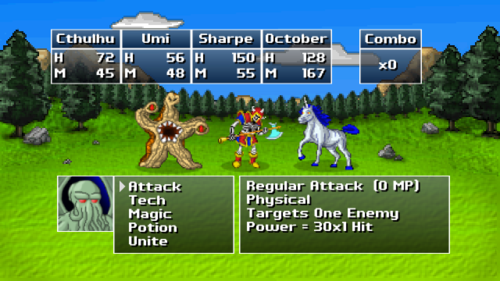 Lovecraft was a pessimist whose stories usually emphasize that the human race is doomed to extinction, but Derleth was more into good vs. evil and came up with the idea that there were good gods and evil gods, and rivalries like Cthugha vs. Nyarlathotep. Lovecraft was also prudish, even for the 1920s, and didn't like to have romance or sex in his stories. But (un?) luckily for him, after his death, authors, artists and game developers have created tons of new Cthulhu Mythos creations, filled with varying amounts of cosmic nihilism, horror, action and sexy sexy tentacle sex. From the Call of Cthulhu Roleplaying Game to Cthulhu Saves the World, from the Megami Tensei video game series to the Lovecraft-meets-mecha anime Demonbane, the world of H.P. Lovecraft and friends keeps mutating and expanding like a horrible tentacled blob ready to engulf the world. Nyarko-san! Another Crawling Chaos, based on the light novels by Manta Aisora with illustrations by Koin, is just the latest and cutest of these hideous, unspeakable invaders! Let the chaos crawl into your heart, and soon you too will be babbling insanely! But will it be with fear…or pleasure? 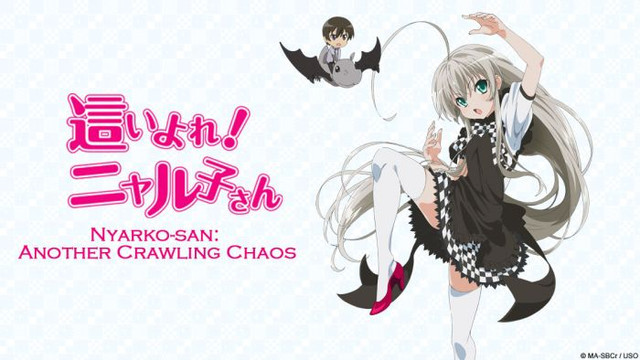 Jason Thompson is the author of Manga: The Complete Guide and the artist of the H.P. Lovecraft graphic novel The Dream-Quest of Unknown Kadath and Other Stories. He also does the webcomic/graphic novel King of RPGs (with Victor Hao).

The Stars Are Right for New Call of Cthulhu Manga Adaptation