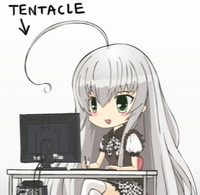 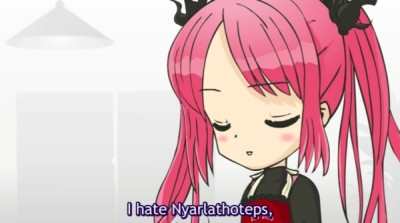 Of the many monsters and aliens created by the author H.P. Lovecraft, Cthulhu is the most famous, but Nyarlathotep is probably in the top five. Which probably explains why this cunning creature is one of the key references in the anime series Nyarko-san: Another Crawling Chaos. 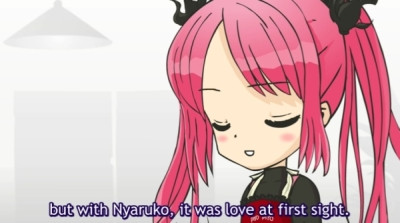 The only reason s/he's not as popular as the giant green octopus-headed bat-winged one is, perhaps, because no one really knows what s/he looks like. Nyarlathotep, like Nyarko, is a shapeshifter who can take many different forms, and the only connection between them is that s/he's always "mocking" and causing trouble, mocking usually defined as "laughing at the pathetic struggles of human beings" and trouble usually defined as "destroying the planet Earth". 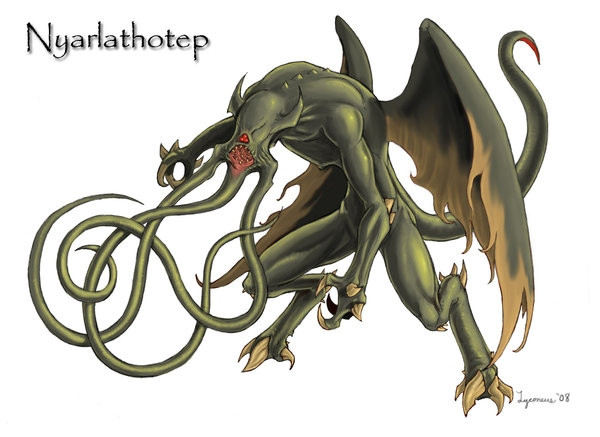 Nyarlathotep first appeared in the 1920 H.P. Lovecraft story of the same name, in which he appears as a steampunk mad inventor from Egypt who foretells-slash-causes the end of the world. Later, in The Dream-Quest of Unknown Kadath and Fungi from Yuggoth, he appears as a full-on Egyptian pharaoh, a charming handsome youth, quote, "gay with prismatic robes" (H.P. Lovecraft probably meant "bright-colored" when he wrote "gay", but I have my suspicions)"whose proud carriage and smart features had in them the fascination of a dark god or fallen archangel, and around whose eyes there lurked the languid sparkle of capricious humour." You can see the Egyptian connection in the Ancient Egyptian was scepter Nyarko holds in the Original Net Animation opening & closing sequences. 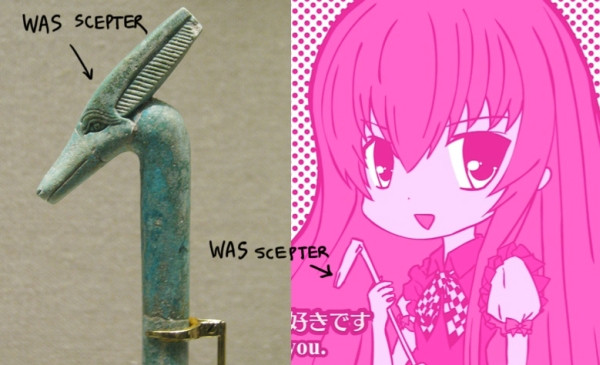 Except surprise—as the hero of Dream-Quest finds out to his dismay, Nyarlathotep's not only a pharaoh, he's also one of the most powerful gods in the universe, the Crawling Chaos, who has 1,000 other forms all of which are horrible monsters! Unlike Cthulhu and most of his kin, he just likes to play with humans for the lols before destroying them and shattering their dreams. In HP Lovecraft's story The Haunter of the Dark, he shows up as a batlike monster with a three-lobed eye, and in the Call of Cthulhu H.P. Lovecraft roleplaying game, Nyarlathotep's favorite form is a giant grayish monster with a tentacle for a head. So, if Nyarlathotep can be a bishonen pharaoh, or a giant tentacle monster, then why not a cute girl? 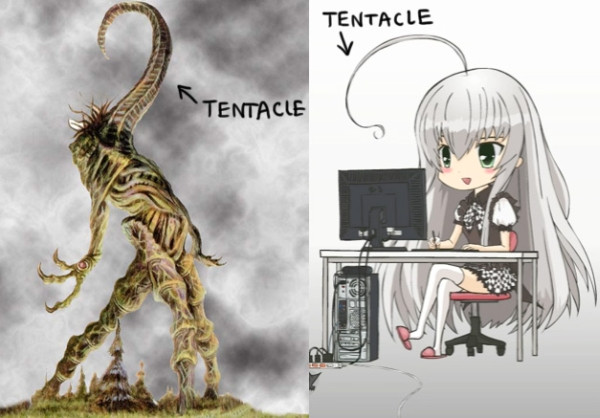 The universe of Nyarko-san: Another Crawling Chaos is based on the idea that Lovecraft met aliens but just exaggerated the truth and made it scarier because he was a horror writer. In the show, Nyarlathoteps are actually a whole species of aliens, not just a single creature, so Nyarko is just one of many of them. She is somewhat nicer than the original Nyarlathotep, although she can still shapeshift. Her obsession with Earthly video games and otaku goods is also an original invention, although maybe HP Lovecraft, who wrote most of his stories in the 1920s and 1930s, would have liked it more if she'd been into 1920s otaku stuff, like Edgar Rice Burroughs novels or Weird Tales; it certainly had lots of 1920s-style fanservice. In any case, Lovecraft, a very prudish man who disapproved of nekkid ladies in horror stories, never would have written a Nyarlathotep-and-human bath scene…but that's why he didn't make the big bucks as a light novel author. Will plush tentacled Nyarlathoteps be the next big thing after plush Cthulhus?
*************

Jason Thompson is the author of Manga: The Complete Guide and the artist of the H.P. Lovecraft graphic novel The Dream-Quest of Unknown Kadath and Other Stories. He also does the webcomic/graphic novel King of RPGs (with Victor Hao).
Tags
nyarko-san, h.p. lovecraft, spring anime 2012
« Previous Post
VIDEO: Wes Anderson and Makers of "Coraline" Animate Sony Smartphone Promo
Next Post »
VIDEO: Tetsuya Komuro feat. Hatsune Miku "LOVE IS ALL MUSIC" PV
Other Top News
18 Comments
Sort by: