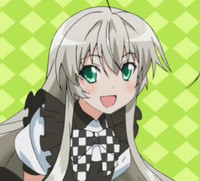 Nyarko-san: Another Crawling Chaos is one of the otaku-iest anime ever created. If you listen to the dialogue closely, every minute is packed with references to everything from Macross: Do You Remember Love to Galaxy Express 999 to Shakugan no Shana to Fullmetal Alchemist to Jojo's Bizarre Adventure. It's also full of references to the monsters of HP Lovecraft's Cthulhu Mythos. Join us as we explore Nyarko-san's blasphemous world of Lovecraftian in-jokes! 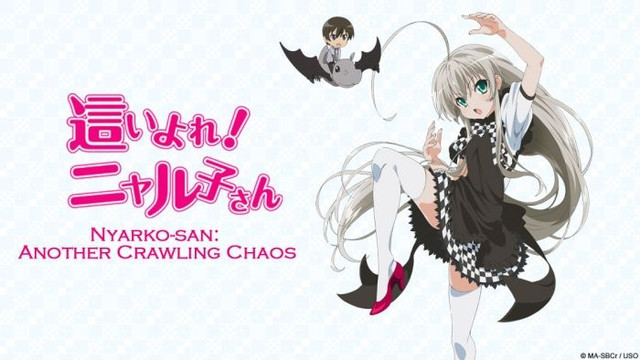 Episode 1, "Like a Close Encounter of the Third Kind" 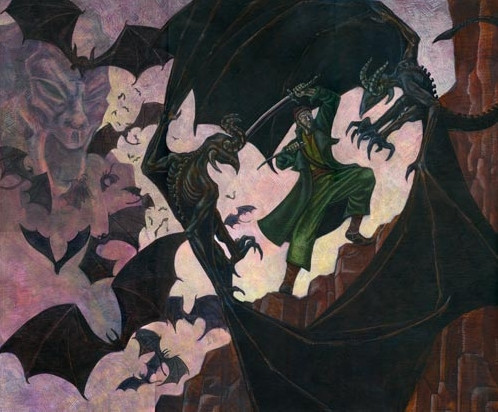 I've already written about Nyarko-san herself, but the first monster that shows up in Nyarko-san is the nightgaunts. Nightgaunts, black faceless bat-winged things, were inspired by nightmares that HP Lovecraft had as a child, although he didn't write about them until the 1926 novel The Dream-Quest of Unknown Kadath. They are mysterious creatures which live in dark pits underground in the Dreamlands, another dimension, and who like to grab people and carry them away to horrible places. Worst of all…when they catch you…they tickle you. 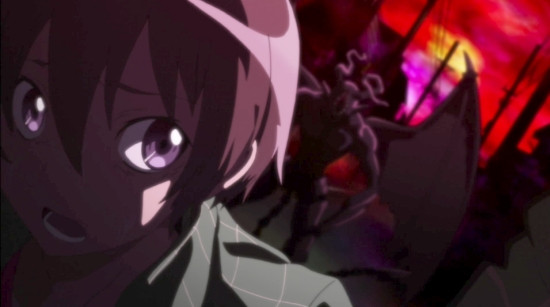 Actually, in Dream-Quest, nightgaunts really aren't that bad when you get to know them, but in Nyarko-san, all the 'evil' monsters (like Nyarlathotep) are good and all the 'good' monsters are bad, so nightgaunts are the #1 mook monster. They also don't have a hideous vertical vagina-dentata mouth in the original Lovecraft stories, although maybe they've been crossbreeding with one of Lovecraft's other monsters, gugs. Nightgaunts also appear in Neil Gaiman's The Graveyard Book, although there, they are totally loveable and have big, cute eyes. 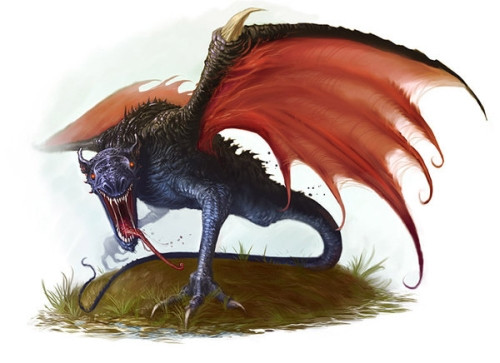 In The Dream-Quest of Unknown Kadath, some of Nyarlathotep's most feared servants are the shantaks, aka shantak-birds. Shantaks are basically giant scaly dragon-bird monsters with horses' heads. Nyarlathotep's servants ride around on 'em, and they presumably can kill you, although they never get any onscreen people-eating action in the actual stories. They're also an enemy in Final Fantasy X-2. There is no record of Nyarlathotep carrying them around in Pokéballs little white balls, but anything is possible. 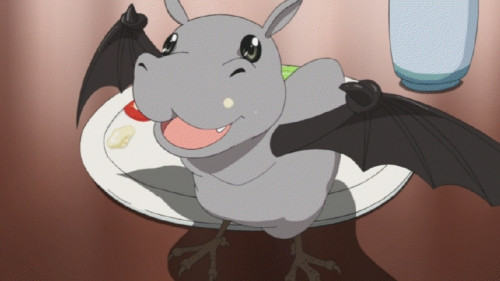 Unfortunately for shantaks, in The Dream-Quest of Unknown Kadath it is revealed that they are terrified of nightgaunts! Even though shantaks are bigger, they just run away from them! Shanta-kun, Nyarko's pet, isn't actually scared of them, but sadly, he still sucks at fighting them. However, even if he's useless against the series' #1 bad guy, he's still lovable when he transforms into his teeny-tiny alternate form. Awwww! He loves carrots, he (or maybe that should be "she"?) lays eggs, and basically he's the cutest scaly horse-bird monster you ever saw. Maybe he should hang out with Neil Gaiman's version of the nightgaunts. 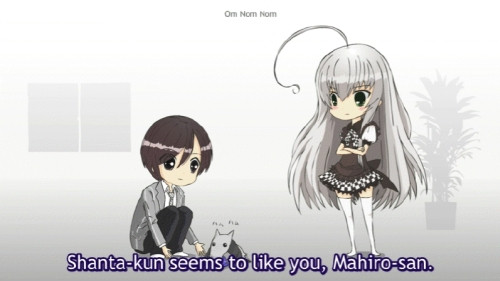 The byakhee are winged monsters from HP Lovecraft's story "The Festival," where they are described as "not altogether crows, nor moles, nor buzzards, nor ants, nor decomposed human beings." The lloigor were essentially invented by Colin Wilson; they are invisible energy-beings which can also take the form of giant reptiles, like the Loch Ness Monster. Lastly, Tsathoggua, the Garfield of the Great Old Ones, is a sort of sleepy, furry toad-bat-monster god which dwells under the earth and eats human sacrifices. He was invented by Clark Ashton Smith. Sounds delicious!

Among his other eccentricities, HP Lovecraft was famous for using certain adjectives over and over in his stories, such as "squamous" (it just means 'scaly'), "eldritch," "non-Euclidean," "daemoniac", "loathsome," etc. Thus, Nyarko loves to use Lovecraftian words even when it's not appropriate, such as her super weapons the "blasphemous grenade", "unspeakable anti-ship chainsaw," and many others.

CthulhuChick online made a list of the most common words in all of HP Lovecraft's stories, proving that Lovecraft's favorite word was "hideous," which shows up a whopping 260 times. (He also liked "nameless"—157 times.) If you prefer graphics, here's a word cloud for Lovecraft's most famous story, The Call of Cthulhu. 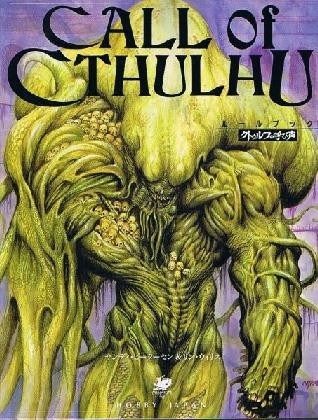 If you thought Nyarko-san couldn't get any nerdier, get this: it's also a tabletop RPG otaku show! Many of the references, including the way the monsters look, and SAN points (Sanity points), are taken from the Call of Cthulhu tabletop roleplaying game, a Dungeons & Dragons-style RPG set in the world of Lovecraft's stories. You can even see the characters playing the game in the closing credits!

Call of Cthulhu, by Sandy Petersen (also the designer of Doom and Quake), was first published in English in 1981. In 1986, the game was published in Japanese, introducing Japanese game otaku to shoggoths, Deep Ones, flying polyps and other Lovecraftian horrors. Today, the game is still in print in both America and Japan. Call of Cthulhu is famous for being a very difficult RPG, in which your character is almost certainly destined to come to a bad end: even if you don't get crushed out of all your HP by some tentacled monster (or worse), just seeing the terrifying creatures can cause you to lose your SAN, driving you into permanent insanity! (Now does the SAN-pun cooking make sense?) If you're interested, the British site yog-sothoth.com is the world's best Call of Cthulhu RPG fan site. 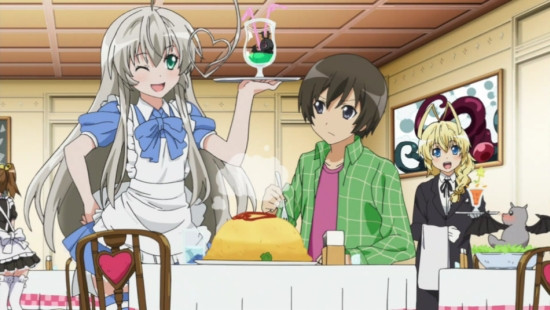 And who could forget the dojinshi parody of Call of Cthulhu, featuring the only thing even more shockingly unspeakable than Cthulhu itself…The Call of Moe?

Stay tuned for more Nyarko-san research…if your SAN can take it! And in the meantime, be sure to watch Nyarko-san: Another Crawling Chaos here on Crunchyroll!

Jason Thompson is the author of Manga: The Complete Guide and the artist of the H.P. Lovecraft graphic novel The Dream-Quest of Unknown Kadath and Other Stories. He also does the webcomic/graphic novel King of RPGs (with Victor Hao).
Tags
nyarko-san, h.p. lovecraft, spring anime 2012
« Previous Post
VIDEO: Miku's "Ie ni Kaeru to Tsuma ga" PV Gets Live-Action Remake
Next Post »
JAMS: More Classic "Final Fantasy" Tunes as "Theatrhythm" DLC
Other Top News
20 Comments
Sort by:

Gou Tanabe Explores H.P. Lovecraft's "At the Mountains of Madness"