"You can lead a man to the past, but you can't make him change it." 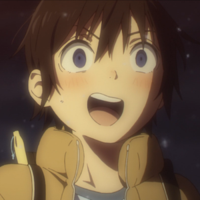 SPOILER WARNING: This post discussed elements from the first three episodes of ERASED.

At the end of ERASED’s first episode, 29 year-old Satoru Fujinuma is plunged into the world of his 10 year-old self. His two-fold mission: save Kayo Hinazuki, a young girl kidnapped and murdered during the grade school days to which he’s just returned and, in the process, save his mother, who’s “just” been murdered in the future from whence he came. The wish many have made—“If only I could go back and do it again”—has been granted to him. But, as Satoru discovers, the past is not so easily changed, even when you have the opportunity. You can live your life again, watch the events that shaped the world around you flash by once more, but it’s no simple task to take control away from the director’s hand or to change the storyboards. Frame by frame, the film whizzes on, and it may be impossible to catch up.

Appropriately for a show about regrets and memories come to life, ERASED takes the idea of film as one of its central motifs. From the first seconds of Asian Kung Fu Generation’s opening song, ERASED frames its story within explicitly cinematic terms, spinning the metaphorical handle of the projector around and around, unwinding the sequences and shots of Satoru’s past before him. On a basic thematic level, this choice makes sense: by returning to the days of his youth, Satoru has stepped into the movie of his own life. He is no longer an “actor” in the year 1988, playing out his role naturally, unaware of the film that is his reality; instead, he has returned in the dual position of audience-actor, fully conscious of both his role in the story and of the nature of the story itself. Compare the tired, familiar look on future-Satoru’s face against the energetic, engaged smile of past-Satoru during the OP. One version of himself already knows every beat of this film’s plot—for the other, it’s all new and exciting. The rest of the OP continues to reference the theater experience both subtly and not, from images that conjure up the look of standing in front of a projector screen to blatant use of film stock imagery.

However, despite Satoru’s new position as viewer-in-movie, effecting change on a script already written may be more difficult than he expects. That is to say, actor though he may be again, he’s also still a member of the audience, looking back on a movie whose credits have already rolled. 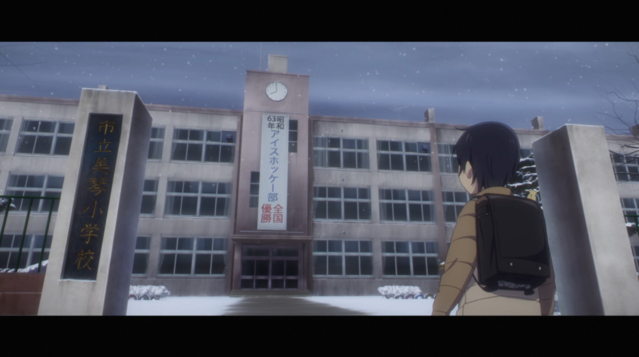 Of ERASED’s numerous cinematic tricks, the most obvious (and thus, perhaps the easiest to forget about) is its use of the 2.35:1 widescreen aspect ratio to frame Satoru’s return to the past. While there are a number of potential interpretations for the shift in terms of Satoru’s character, such as the decreased visual space indicating the reduction in his physical perception of the world due to his smaller body, one that I’ve latched onto more than others is the way the black bars on the top and bottom of the screen add a sense of claustrophobia and helplessness to certain scenes. For example, in the third episode, as Satoru witnesses Hinazuki’s lie, the top of the frame cuts off the top of Satoru’s head, trapping him in the same visual space as Hinazuki’s shoulder and her mother’s threatening hand. He’s there, watching, but he can’t do a thing.

In terms of the film motif, the Satoru’s inability to act as represented by the enclosing black bars of the aspect ratio extends out past the metaphor as Satoru as the audience-actor and engages directly with the idea of the distance between the viewer of a film (or anime) and the events on screen. Like an audience in a bad movie, Satoru is blocked from taking action by the construct of the film and his status as “watcher.” He knows the ending of this story, yet he is helpless at this point (despite all his motivation and desire) to do anything to help Hinazuki. Of course, this isn’t rule across every scene of the flashback, as Satoru does make choices and take action to save her; however, he finds himself again and again foiled by the habits of the past, by the paths of a story already told. He makes the choice to lose the race, but he has only made the same mistake he did 18 years ago again. He lives through his school days again, and yet he’s helpless to prevent the bullying of Hinazuki. Again and again, he watches the past flash before his eyes, all but helpless to change it.

Will he ever be able to break out? For at least one solitary moment, the answer is yes. As he stands beneath the “Christmas tree” with Hinazuki, the use of the wide angle in combination with the widescreen aspect ratio produces a lovely shot that spreads both the tree and the horizon out horizontally to the very edges of the frame. Satoru hasn’t been able to give Hinazuki real freedom yet, but the change in cinematographic techniques bursts through the limiting feeling of cinema to find a breath of freedom. 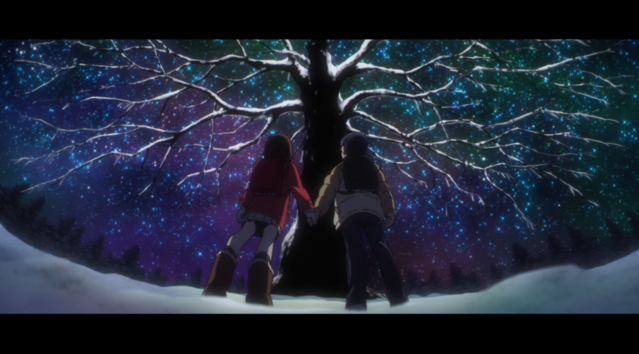 We could stop with the analysis here and be satisfied, but I think it’s appropriate to note that a show so self-consciously cinematic in nature as ERASED also can’t keep itself from using the language of cinematography to reach out to us, the audience outside Satoru’s metaphorical audience-self. From peculiarly movie-like shots to the deliberate contrasting of similar shots through Satoru’s memory and his re-lived experience, Tomohiko Ito’s direction comes across as determined to make itself concretely felt by those of us watching through our screens. In other words, we are supposed to notice the visual cues given to us by the show. Techniques like the repeated contrast between red and blue beg to be noticed; yet it’s all a tease.

In my opinion, one of the fundamental elements for a thriller like ERASED is to rob the audience of their sense of control, to make them feel (consciously or not) the anxiety of being unable to impact the outcome of what they see playing out before them. By calling attention to itself, ERASED’s cinematography puts us in the same place of helplessness that it puts Satoru. We can notice the warning signs like an angled shot of Hinazuki’s mother or the slightly suspicious framing of a teacher who wears a red tie, but ultimately we’re helpless to do anything. We may be pushed to the point of rage as we see a single motion of an abused Hinazuki’s hand, but what can we do? We’re just the audience. All we can do is watch. While I wouldn’t go so far (yet) as to say that ERASED uses its cinematography to incriminate its audience’s inaction, it certainly does emphasize our lack of agency upon what we’re seeing. In a way, we become Satoru—and at the the same time, we must beg him to act for us.

This is fiction, but fiction deeply felt. The more acutely we apprehend our own impotence, the more we must root for Satoru to find a way. The very artifice of the film draws us in. 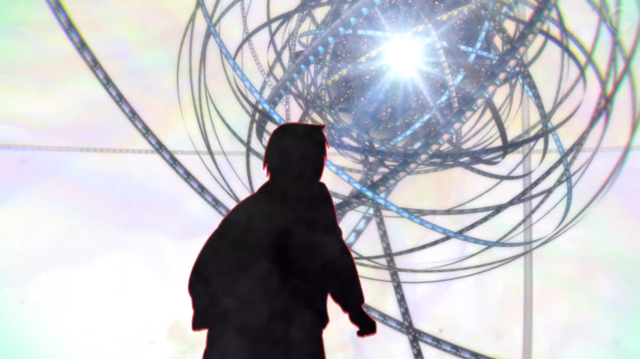