Check out the real world inspirations of sweetness & lightning! 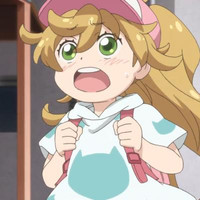 But first, the incredibly pleasant and heartwarming sweetness & lightning sadly came to an end this week, and I have to say, these roughly twenty-three minutes every Monday will dearly be missed by me. Seeing Kohei grow as a parent, but also Tsumugi’s and Kotori’s reactions to their home cooked meals, were always a joy to watch.

Now, let’s move on to the setting and locations of sweetness & lightning. Since the show almost completely revolves around Kohei, Kotori, and (occasionally) Tsumugi's cooking segments, naturally most of the time was spent inside Kotori’s family’s restaurant. There weren't exactly a lot of different locations and never really a change of scenery. We got to see the same shopping street almost every episode of the anime  so please don’t be disappointed that most of the comparison shots today are going to focus on that street. Said street is called Skip Street (すきっぷ通り- sukippu toori), and is located north of Musashi-Sakai Station in Musashino, which is a bit west of Tokyo. Skip Street seemed awfully familiar for some reason, and that’s because it’s not the first time that the street was featured in an anime – as I mentioned before, Shirobako also had a couple of scenes there. However, the two shows took different approaches to recreating Skip Street (and their other locations in general). Shirobako’s take on the street was remarkably accurate, recreating the shops and buildings from real life almost one to one. (This is also true for the anime in general; even some of the supporting cast was based on real people from the industry.) On the other hand, sweetness & lightning was not as strict when recreating the street, basically only using the street name and sign – which of course isn't a bad thing.

*All photos were taken with Google Street View

We’ll start with scenes from the extremely delightful opening and ending of sweetness & lightning. We probably get to see the world from Tsugum's point of view here, as all the buildings are made of Legos (that’s probably the worst nightmare for parents who tend to step on those things), but the real world inspirations are still inevitably clear. The first shot shows the exit of Skip Street, and the second one the entrance to Musashi-Sakai Station.

That’s the community center, which only appeared in the opening, but never in the show itself. The same exact building also got shown in Shirobako. (There’ll be a pic at the end of the article.)

This is a good example of how loosely sweetness & lightning is recreating Skip Street. There are a few points of reference and visual clues – the street pattern is the same, the building with the balconies in the background looks similar, the yellow sign with the red dot is identical – but aside from that, nothing looks really similar. sweetness & lightning doesn't necessarily want to recreate its real world counterparts as accurately as possible; instead, the show just aims to create a natural and authentic feel and atmosphere for the place.

That one line basically sums up the whole show pretty well.

We finally get a change of location in episode five, as Kotori and Shinobu take a trip to the cinema in Shinjuku. The rectangular building shown here is a Don Quijote store, a discount chain, and you can basically buy everything there. At the end of every one of my trips to Japan, I always have to buy an extra suitcase in that exact store because, somehow, I always manage to end up with way too much anime merchandise. I’d already call it a tradition of mine.

Kotori and Shinobu went to the Shinjuku Piccadilly Cinema, one of the newer cinemas in the area. The shop which can be seen here on the right is a Muji (they called it Maji in the anime), which is a Japanese retail chain, with stores all around the world, selling mainly household items. What sets Muji apart from its competition is its focus on minimalistic design and its ‘no-brand’ policy.

At times, the show can be quite accurate, like in this case. From the brown building on the left, the glass building with its signs in the middle, to the blue building with the similar looking logo on the right, the show pretty much nails its real world counterpart.

However, Skip Street is a different story. Basically the only identical things in this shot are the Skip Street sign, and the Kokuyo (Kokoyo in the anime) sign on the left. As you might have guessed by now, Kotori’s family’s restaurant is probably not real. I even tried to figure out the map that was shown on the restaurant's business card in episode one, but no luck.

sweetness & lightning’s Vege burger is a Mos Burger (a Japanese fast food chain) in real life. If you want my opinion, I think Mos Burger is good, but it’s definitely nothing special.

The end of Skip Street. Shinobu’s vegetable shop is a flower shop in reality.

More FamilyMart, or FinaMart in the anime.

These yellow street lamps on the right look like seashells to me.

In the last episode of sweetness & lightning we get to see glimpse of Shinjuku Station.

The glass building in the background is Shinjuku Station’s bus terminal. Me and a good buddy of mine took the bus there to Mount Fuji, where I took a couple of comparison shots for the anime Encouragement of Climb.

And that’s all – if you haven’t gotten enough of sweetness & lightning, then make sure to check out the manga, which is also available on Crunchyroll!

Bonus Shirobako comparisons: (sweetness & lightning on the left, Shirobako on the right)

The community center was shown in both sweetness & lightning and Shirobako.

Musashino Animation was even the name of the fictional animation studio in Shirobako, if I recall correctly. As mentioned before, most of the locations were taken from the city Musashino.

Anime vs. Real Life is going to take a look at the real life locations of Sound! Euphonium next week, stay tuned! Now, what were your thoughts on sweetness & lightning? Let me know in the comments!