These two shows may be fire and ice, but they have something in common too! 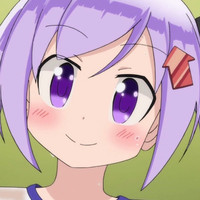 The fall 2016 season of anime brought with it a bounty of series for sports anime lovers, each with their own approach to the genre. We had Haikyu!!'s high-octane third season, March comes in like a lion's intensely introspective study of a young shogi genius, Long Riders' relaxed take, Yuri!!! on Ice's almost omnivorous genre leanings, and Scorching Ping Pong Girls' recognizable traditional structure.

Among all these, although not a logical match-up on the surface, I think Yuri!!! On ICE and Scorching Ping Pong Girls have some interesting similarities in the way they treat the competitors in their respective sports. Unlike some of the other sports anime airing this season, both Scorching Ping Pong Girls and Yuri!!! On ICE feature ensemble casts participating in individual sports (the one exception being the doubles match in Scorching Ping Pong Girls), something which allows them to highlight a number of different characters in isolation. Of course, given the size of their casts, neither show is able to go as deep with any character as something like March comes in like a lion is, but they do make efforts to give life to their characters beyond simple sketches of character archetypes by taking closer looks at their characters' reasons for competing.

Between the two shows, my favorite is the one that I think best accomplishes the goal of bringing its characters to life this way, but I think I'll keep that particular piece of information under wraps until a bit later. For now, let's take a look at each show and the ways they put their characters' motivations on display.

No matter how you look at it,Yuri!!! On ICE is an extremely busy show. With the prominent relationship between Yuri and Viktor sharing screentime with the Grand Prix and the individual narratives of the many other characters, there's relatively little time for anyone to really grab the lion's share of the story's limelight. There's one prominent exception to this rule, though—the skating performances themselves. For better or for worse, Yuri!!! On ICE is devoted to making sure each skater is given the opportunity to display both their skating and their stories to the audience (specifically, those of us watching the show). Unlike the in-show spectators, we the viewers of the anime are given the opportunity to not only watch the skaters display their prowess on the ice, but also to peek into their psyches and thoughts through the interior monologues and flashbacks that accompany each skater's performance.

At times, this structure has given us some truly intriguing insights into the interior lives of these professional athletes and performers. I think the first moment I really noticed this was in Yuri!!! On ICE's sixth episode during American skater Leo's performance. As with many of the skating routines throughout the show, Leo's is accompanied with a voiceover monologue in which he more or less spells out his philosophy on skating. In the midst of his reflections, he offers up a particularly memorable line—"It's a song I like, so I just want to skate the way I see the music." It's a teasing glimpse at a particular artistic philosophy, one that is quickly swept away as the routine ends and the next skater appears. 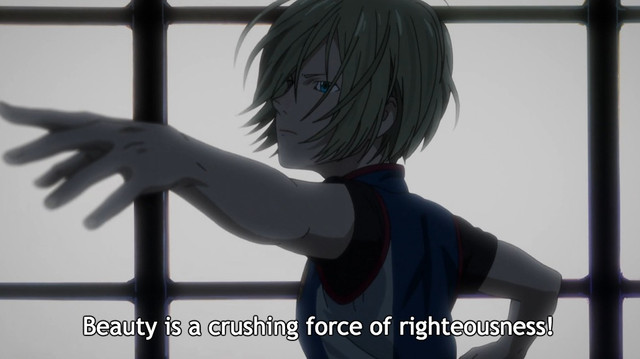 Another such moment that really captivated me came from the intrepid Canadian J.J. Because J.J. occupies a larger place in the story than Leo, he's afforded a bit more time to show who he is outside of his performances, but even so the interior monologue paired with his monstrous short program in episode 8 is enthralling thanks to his seemingly unlimited confidence and Mamoru Miyano's over-the-top articulation of his lines. In that moment, I couldn't help but be reminded of certain idol anime I've watched and of the overflowing passion the characters in them possess for simply bringing something wonderful to their audience.

These two personal favorite examples aside, nearly every performance since Yuri!!! On ICE turned its attention to the international competitions has been marked with the same kind efforts to give each skater their due. From the powerful (if a bit weird) farewell performance from Michele Crispino to his sister Sala to the colorful imagery of Guang-hong's mobster story program, each time a skater takes this ice is a new exploration into a new character for us. Unfortunately, I'm of the opinion that the number of personas and motivations Yuri!!! On ICE tries to juggle means that none of them, even the titular Yuri, really get the chance fully be expressed as either characters or skaters, but I do appreciate that we at least get peeks into these fascinating interior worlds. 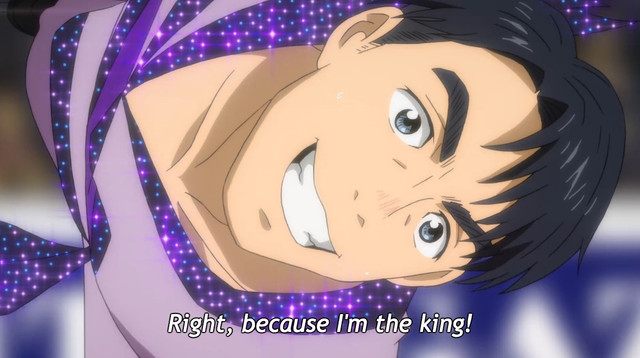 In contrast to the cool skimming of characters in Yuri!!! On ICE, Scorching Ping Pong Girls is a show that gleefully dives deep into the heated passions, however small, of its characters. While the latter show makes use of many of the same basic techniques that Yuri!!! On ICE does (flashbacks, interior monologues) to tell us about its characters, it does so in a more vividly personal way—which is why I think Scorching Ping Pong Girls is ultimately more effective at consistently creating a link the audience can feel between the characters' lives and their ping pong.

The key factor here is that Scorching Ping Pong Girls seems to prefer to use vignettes rather than montages when building our understanding of its characters. While not all the members of the Suzumegahara and Mozuyami clubs get the same depth of treatment, self-contained stories like the beginning of Hokuto and Hanabi's friendship or Kururi and Zakuro's bond take time away from the action of the matches to invite the audience to invest in the characters—and then tap into that established investment when it comes time for a match. Even Agari's arc in the opening episodes of the show as she overcomes her jealousy of Koyori functions in a similar way, drawing a clear connection from an emotional piece of character work back to the sport itself. 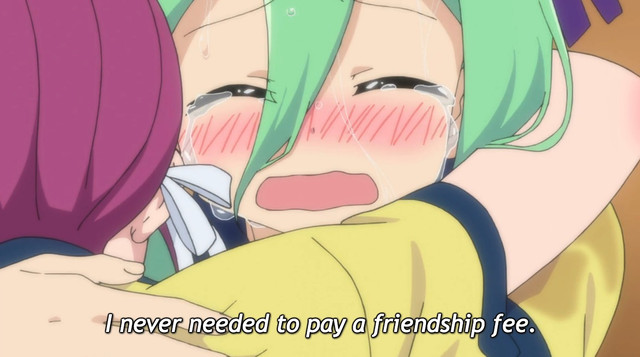 And so, because Scorching Ping Pong Girls is so intentional about laying the emotional groundwork for many of its characters' motivations first, their matches against each other are able to pull the viewer in at two levels. First, thanks to the fun shonen-styled powers of each player, the games work well as exciting bouts of strategy. Second, they can tie the stakes of the sport itself into each character's emotional stakes in the match. Each game thus becomes more than a question of who will win and who will lose in a sporting sense, but are also explicitly personal affairs that work because the audience knows going in what the match means to the character.

In the end, I suppose you could chalk up Scorching Ping Pong Girls' success to the show's unabashed appeals to the sentimental.The match is just the beginning. Following each one friendships are solidified, life lessons are learned, comfort given. Rather than being an end in itself, the sport becomes the means by which the arcs of each character are driven to conclusion. Of course, it helps that the matches are also riotously fun affairs that lean into visual metaphors and a whole lot of excited shouting across the ping pong table to bring everything to a fever pitch of excitement and, ultimately, emotional release.

If you've gotten this far, you can probably tell that I personally prefer the approach and execution of Scorching Ping Pong Girls over that of Yuri!!! On ICE, but I think it's a lot of fun to see how both use similar techniques to try and achieve the same goal of investing the audience in their characters. I have a sneaking suspicion that the overlap in audiences for these two shows is a rather small pool, so I hope that for those of you who have only seen one of these two shows, this was a fun look across the pond at an anime that shares some similarities with a show you like, even if it doesn't appeal to you personally. 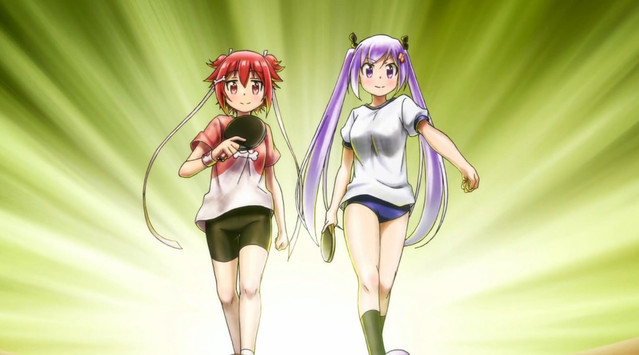