Yakisoba- perfect for feeding a family of 5, or for giving you the strength to defeat your enemies! 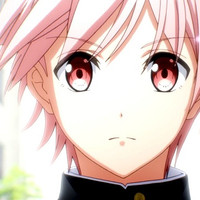 If you like Ouran High Host Club, Kenka Bancho Otome is the Fight Club version of that. Let me explain.

Our young heroine runs into someone on the street. They collide, and fall down, and no one is seriously injured. Except! What a coincidence! The heroine looks exactly like the guy she ran into- pink hair and all. And, surprisingly, it seems as if this young man knows exactly who she is, and that she's a master at martial arts. And, somehow, despite the fact that they didn't even have a bad fall, he is SERIOUSLY INJURED and the ONLY SOLUTION is that this girl must take his place at his high school.

Being a poor pauper of a girl, she decides that going to a private school is better than the public school she was headed to, so she goes to fill in for him. Imagine her shock when she finds that in order to survive school, you have to LITERALLY fight your way to the top of the pecking order. As she begins school, she meets a bunch of hot guys along the way, all of whom get absolutely thrashed by her superior fighting skills. Thus, her reverse harem begins to form.

And that's really all there is to this show- it's based on a game, which sorta explains the cyclical nature of it. Each episode is nine minutes, so the focus is really on the characters she encounters and the fights she gets into- nothing too fussy, and, I think, both hilarious and fun to watch. She meets an enemy, fights 'em, and moves onto the next. I don't know why I enjoy this anime so much, but the whole premise is so hard to believe, and the circumstances of each fight are so bizarre, I think it just makes me happy through sheer perplexity.

One of the characters the heroine, Hinako, gets into a fight with is Takayuki, the green-haired loner who doesn't want to fight anyone. His one weakness??? Only his adorable siblings, for whom he is shown cooking a big pan of yakisoba. Yakisoba is a really tasty and easy Japanese dish, often served as a snack or as a festival food. It's just noodles cooked up with veggies and pork in a sweet-savory sauce, and in this anime it looks like Takayuki just sticks to the essentials- noodles, cabbage, an egg, and pork. 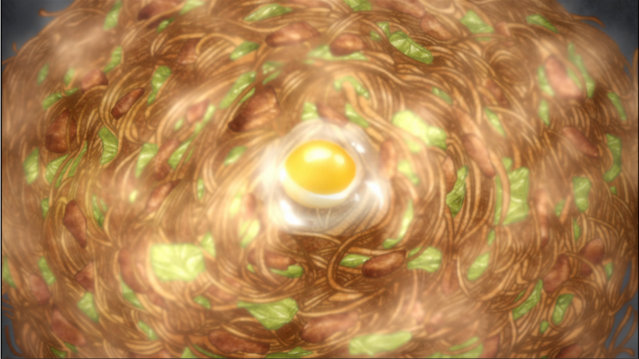 Now, you can choose whatever kind of pork you'd like here- the picture is fairly nondescript in showing the kind of pork he uses. I decided to go with pork belly- bacon, to be exact- because I like bacon and it's delicious. As for the egg, you can absolutely eat this with a raw egg on top, if you're confident in your eggs. I didn't want to risk eating a raw egg, because eggs in America (from the grocery store) aren't always safe to eat raw. However, if you are confident in the source of your egg, I recommend you go for it! I hate egg in most cases, but I actually don't mind it raw. If you want to put egg in, but don't want to eat it raw, you can easily scramble it into the noodles for a creamier texture in the end result.

Watch the video below for full instructions!

Instead of making the sauce from scratch, you can substitute the sugar, soy sauce, oyster sauce, ketchup, and wrocestershire sauce with 1/2 cup of yakisoba sauce, which can be bought pre-made from most Asian supermarkets.

2. Combine sauce ingredients, and stir through until smooth.

4. Over medium high heat, cook pork (about 5 minutes). When done, add in cabbage and cook down until some of the water has released and it's nice and green (about 1 minute).

5. Add in yakisoba noodles and toss with pork and cabbage.

6. Add in sauce and toss through until everything is evenly coated.

7. If you wish to add an egg, make a hole in the middle of the noodles and crack in the egg- scramble to cook.

I hope you enjoyed this post! Check in next week for another recipe. To check out more anime food recipes, visit my blog. If you have any questions or comments, leave them below! I recently got a Twitter, so you can follow me at @yumpenguinsnack if you would like, and DEFINITELY feel free to send me food requests! My tumblr is yumpenguinsnacks.tumblr.com. Find me on Youtube for more video tutorials! Enjoy the food, and if you decide to recreate this dish, show me pics! :D
In case you missed it, check out our last dish: Manju from "Sakura Quest". What other famous anime dishes would you like to see Emily make on COOKING WITH ANIME?
Tags
cooking with anime, kenka bancho otome, yakisoba
« Previous Post
PlatinumGames' "Vanquish" Officially Slides to PC on May 25
Next Post »
100 Mascots Strut Their Stuff for "Sanrio Character Ranking 2017"
Other Top News
6 Comments
Sort by: