Check out the real-world locations of Laid-Back Camp 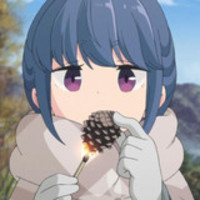 "Nomen est omen" seems to be the motto for many of the winter season’s new anime titles. Ms. Koizumi Loves Ramen Noodles, A Place Further Than the Universe, and School Babysitters all made good on their titles' promises, and Laid-Back Camp is, likewise, undeniably a very easygoing show about camping.

Key factors for Laid-Back Camp’s cozy tone and atmosphere are its fitting soundtrack, light humor, and especially the show’s inviting setting and lush backgrounds, which really manage to capture the natural charm of the great outdoors. On top of that, the show’s camping aspect doesn’t fall short in any way. Laid-Back Camp depicts all the necessary steps for successfully setting up a campsite, from assembling a tent to collecting firewood, with such care and detail that it really manages to somehow kindle an unknown desire in you to suddenly go camping. And there’s just the right place for that. I’m of course talking about the actual real-life camping site from Laid-Back Camp’s first episode, the Koan Camping Ground!

*All images were taken with GOOGLE STREET VIEW (I know that some of the Street View images don’t do the show’s backgrounds justice, but it’s going to be a little while until I’m in Japan again, and they still manage to show off how accurately the anime manages to recreate the real locations)

In the first moments of Laid-Back Camp, we see the levelheaded Rin biking through a curvy mountainside in the south of Yamanashi Prefecture, on her way to the camping ground.

The lake she is heading for is 900m above sea level, so it’s highly impressive that she’s able to bike up the relatively steep road with her foldable bicycle. The same goes for Nadeshiko, who cycled there all the way from Nanbu, which is roughly 40km away.

It’s only a few more meters to the lake and the camping ground from here.

There, she arrives at Lake Motosu, the third largest and first clearest of the Fuji Five Lakes. The name says it all; the Fuji Five Lakes area got its name from the five lakes at the foot of Mt. Fuji, all of which were created by eruptions from the sacred volcano. They’re popular destinations for outdoor activities such as hiking and camping, and they all offer a good view of Japan’s highest mountain. Lake Motosu’s view of Mt. Fuji is especially noteworthy, but you’ll find out more about that a little further down.

On her way to the camping ground, Rin encounters Nadeshiko for the first time, who is sleeping in front of the nearby public restroom.

Rin heads to the Motosu Central Lodge to check in at the Koan Camping Ground. According to their website, camping fees are 600 yen (around $5) for adults and students above elementary school. If you’re not too keen on spending the night in a tent, but still want to get that outdoor feeling and take in the beautiful scenery you see in the anime, you could also opt for one of the more comfortable wooden cabins around the camping ground.

The entrance to the small camping ground and the lake is right around the building. Unfortunately, the place is rather difficult to reach by public transport. There is only one daily bus departing from Shinjuku directly to Lake Motosu, which takes approximately two and a half hours, and will set you back around $20. It’ll also still be quite a walk around the lake until you finally get to the camping site, but who said that an anime camping pilgrimage would be a walk in the park?

As you’ve already witnessed in the anime, the marvelous scenic landscape should be rewarding enough to make up for all the hardships to actually get there. Rin and Nadeshiko were understandably awed by the view of the country’s highest mountain, but this isn’t just any other ordinary view of Mt. Fuji – it’s a million dollar view, or more accurately, a thousand yen view.

This specific view of Mt. Fuji as seen from Lake Motosu, which we got to admire in Laid-Back Camp’s first episode, graces the reverse side of the current 1000 yen bank note (around $8.85) since 2004. The bill’s image of Mt. Fuji is modeled after the famed photograph “Lakeside in Spring,” taken by Koyo Okada, a man who devoted his entire life to photographing Japan’s highest mountain. The same image was also part of the design of the older 5000 yen bill.

Nadeshiko later gets picked up by her older sister at the nearby parking lot.

As I already mentioned, it’s a relatively long way home to Nanbu. On her way to school, Nadeshiko has to cross the Fuji River and take the train at Utsubuna Staion (pictured below).

Her school is located in the northern Minobu.

Real camping might not actually be as laid back as it is in Laid-Back Camping, but I would be lying if the show didn’t manage to make camping look incredibly appealing to me. If the anime also managed to peak your interest in camping, here are the exact locations featured in the show:

Does Lake Motosu seem like a place where you’d like to go camping? Did Laid-Back Camp do a good job of depicting the actual locations? Sound off in the comments below!