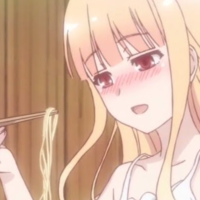 Koizumi from Ms. Koizumi Loves Ramen Noodles is a ramen connoiseur – a true ramen foodie who will stop at nothing to have her ramen and eat it too. In this episode, Koizumi treats a lost child to a bowl of ramen, straight from the Shin-Yokohama Ramen Museum. It is only after the fact that she returns the child, but hey, if I was lost, I'd probably enjoy having a hearty bowl of ramen. The child's mother, overwhelmed by gratitude, gives Koizumi a ticket for a discounted bowl of German Ramen, which was a featured item at the museum in 2014.

Koizumi eats it and loves it, stunned by the "taste of Germany," whatever that means. Undoubtably, she is referring to the unique taste of sauerkraut paired with the speck and an herby-smokey spice mixture that is sprinkled over the top. Sound good? Turns out, you can eat it in real life! Indeed, this is a ramen is designed by Muku Ramen, a German based ramen restaurant, and as a result the ramen we get to enjoy through this anime is based on the one from real life. 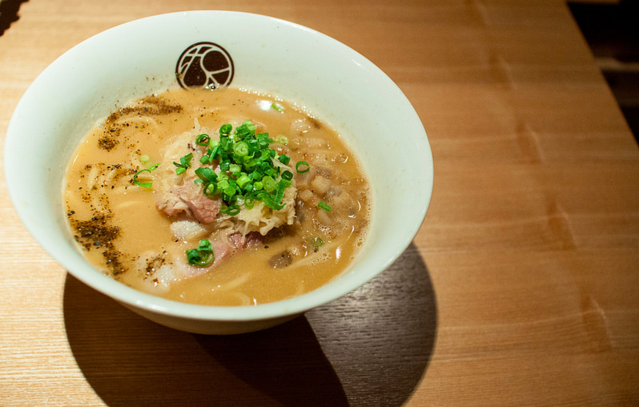 Unfortunately, the ramen is no longer featured in the Yokohama Ramen Museum, nor could I find it on the website's menu of the German restaurant dishes. So, I had to develop the recipe for this ramen based on personal experience, research, this review, and the guide pictured below. 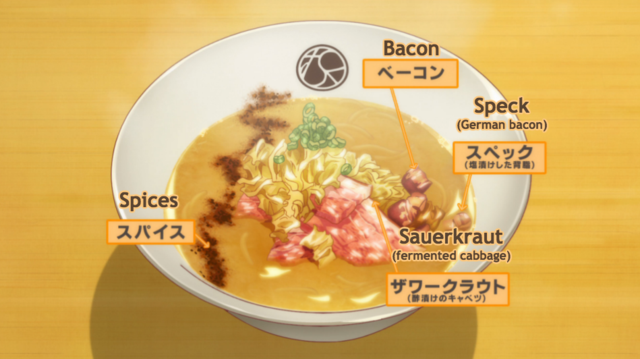 The speck is easy enough to come by – it's a special kind of bacon similar to prosciutto, smoked in the final stage of preparation. It is often served in cubes or pieces which fry up into salty, crunchy bites of goodness. Sauerkraut is the classic pickled cabbage. Normally eaten as a side dish, it provides a sour component to the ramen, not unlike kim chi. The "spices" pictured in the anime are what confused me. That is such a vague term, I really had no clue what to use, other than that the final mixture had to be brown in color, and a reviewer mentioned it added an herby-smokey effect to the ramen. After some research, I settled on a variation of a Bavarian spice mix, which encompases some flavorings popular to Germany, with some paprika for a extra kick.

This ramen is mentioned by several people to be a tonkotsu shoyu broth. This means that the foundation of the liquid is broth made from pork bones, and it is seasoned with a soy sauce tare. A tare is a seasoning base used to give the broth a punch of flavor. The Shoyu base is meant to highlight the flavor of soy sauce, and gives a deep, hearty flavor to the soup. I made mine a tad sweet, but it ended up contrasting nicely against the saltyness of the bacon and speck.

I also boiled my tonkotsu broth for 30 hours! No kidding. Was it worth it? Yes, I think so. Out of all the ramen I've made, this broth tasted the most authentic, the most flavorful. It's so much better than anything you can get out of a can or a box, and though it takes a while to boil down the bones, it's not hard to do at all, and takes almost no effort. If you've got a quiet weekend with nothing to do, you might as well put a pot on to boil and get a fantastic soup broth out of it. Then, pair it with two, TWO kinds of bacon and some noodles and you are in business, my friend. This bowl of ramen is fantastic – you won't regret making it. And you might even understand that "taste of Germany" for yourself.

1. Put bones into a stock pot and cover with water. Bring to a boil and remove from heat. Dump out water and cool under cold running water. Clean bones thoroughly, using a chopstick or wooden skewer to pick out any of the marrow or blood in any of the crevasses. Bones should be white and grey in color when done cleaning.

2. After cleaning bones, bring 2 tbsp of oil to medium high heat in the stock pot. Throw in onion, garlic, and ginger and char on all sides, about 15 minutes. Throw bones in along with white leek, white green onion, and shiitake mushrooms.

3. Cover with cold water, and bring to a rolling boil. Skim off any scum that rises to the top. Clean sides of any scum that accumulates around the edges. Reduce heat slightly to a simmer, and cover with a lid. Let sit for 15 minutes.

4. After 15 minutes, check on stock. It should be boiling away nicely, but not enough to shake the lid or boil over the rim. Adjust heat if necessary. Then, allow to boil at least 6 hours. Top off with water as necessary. I boiled my broth for 30 hours, at which point most of the bone had dissolved into the water. If you need to leave the pot unattended, top with water and reduce heat to low. Bring back to a boil when you return. When done, strain out in a mesh sieve, and, for clearer results, strain through some cheesecloth. Set aside until ready to use.

5. Make shoyu tare. Combine ingredients in a pot, and bring to a simmer. Reduce by half over medium heat, about 15 minutes. Strain out garlic and pepper, and set aside for later use.

6. Cut bacon strips in half. Fry over medium high heat, about 3 minutes per side, or until cooked until soft with crisp edges (or desired done-ness). Fry up the speck until nicely crisp.

7. Place all ingredients for German Spice mixture into a mortar and grind until you have a fine spice blend. You can also do this in a coffee grinder.

8. When ready to assemble, bring bone broth and tare to temperature. Portion into the bowl- about 1/4 cup tare to 2 cups broth. Adjust proportions to taste.

9. Boil ramen noodles about 1-2 minutes, depending on desired done-ness. Strain and place into the broth.

10. Top with two slices of bacon, a pile of sauerkraut, a good sprinkle of speck, German Spice mixture, and green onions over the top. Enjoy!

In case you missed it, check out our last dish: Yuna's Angel Food Cake from"Cardcaptor Sakura: Clear Card Arc". What other famous anime dishes would you like to see Emily make on COOKING WITH ANIME?