From Bebop to Champloo: Shinichiro Watanabe's Legacy of Cultural Mashups

The master of mixing music and setting 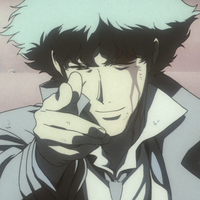 Sci-fi and jazz. Samurai and hip-hop. Great flavors you'd never imagine would taste so good together. Taking the unlikely and combining it seamlessly together is exactly what Shinichiro Watanabe does with both Cowboy Bebop and Samurai Champloo. Take familiar settings for cinema, sci-fi and Edo Japan, and give them a tone, style, and aesthetic that simultaneously contrasts with and complements the setting. Rather than coming off as muddled or confused, Watanabe's work shines as something both completely familiar and entirely unique. Bebop and Champloo take different approaches, but both anime ultimately reach the same end of being shows that can't be classified as any one genre. 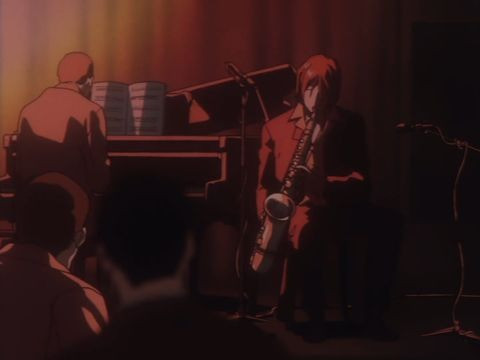 Bebop's influences are just as eclectic as the jazz and blues that make up its soundtrack. In the span of a few episodes, it can go from gangster noir to horror-comedy to pure sci-fi without ever feeling out of place. In the same way, the soundtrack switches between jazz, blues, and even heavy metal to give each episode its own unique feel. Songs are rarely repeated in Bebop, allowing scenes to become defined by their soundtrack as much as the events themselves. The secret to how Bebop blends genres and styles so well lies in how it divides up its stories and settings. With the exception of Spike's past, no two stories share the same exact style or setting. Each individual episode is the Bebop crew going somewhere new and getting involved in someone else's story. Bebop makes you believe that a chase involving hallucinogenic mushrooms exists in the same universe as a genetically modified super-villain. Each one is its own story, with the protagonists only passing through. Bebop's episodes may vary in quality, but their distinctive styles and tones ensure that not one is forgettable. 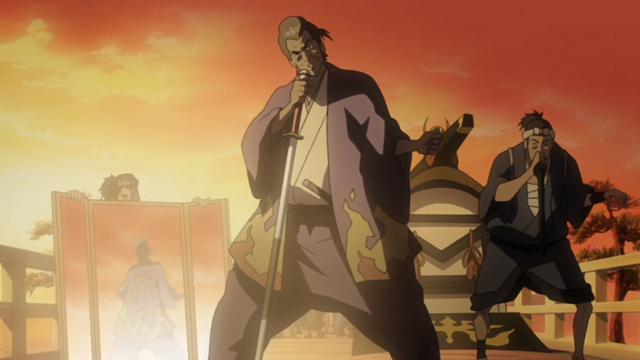 Samurai Champloo takes a slightly different path, wholly committing to its hip-hop soundtrack and integrating it with the historical Edo era of Japan. Instead of just playing hip-hop music over a generic samurai story, Champloo goes a step further by imagining a version of Edo Japan with strong elements of hip-hop culture woven into it. Mugen fights using breakdancing moves, random peasants rap about the ghost of Yoshitsune, and there's even an episode dedicated to graffiti art as Mugen learns to read. Watanabe is fully aware of how much this contrasts with the historical setting, and uses it to create some great humor. Nonsensical as it is, the general tone and style are consistent enough that you really believe this is a world where rapping samurai exist.

In many ways, the blend of hip-hop music and setting even complement the story. The series begins with Mugen and Jin running afoul of a corrupt governor and ultimately killing him, a theme that continues throughout Champloo. Mugen and Jin often come into conflict with corrupt officials, and exist outside the usual social structures of Edo Japan as a vagrant and a ronin, respectively. This mirrors hip-hop's often rebellious attitude toward authority figures, making the soundtrack a more fitting choice than it first appears to be. Even the cast itself represents this dichotomy of settings. Mugen is a hothead whose personality reflects a more contemporary set of ideals, while Jin is a more traditional samurai-style character. They clash quite a bit, but, like Champloo's setting and aesthetic, are unstoppable when they work together. 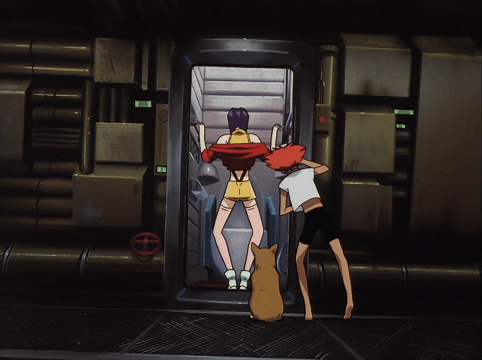 What Bebop and Champloo both excel at is using their disparate genres to tell a wide range of universal stories. Some episodes are anchored in their settings, like the Bebop crew taking on a cult leader who uses technology to brainwash people, but others tell the kind of stories that could be set anywhere, like Mugen encountering figures from his past in a heist gone wrong. Even when the stories themselves are familiar archetypes -- "heist gone wrong" and "last clean cop on the force" aren't exactly unknowns-Watanabe's top -- their execution and genre mixing gives them the comfort of familiarity and the excitement of novelty without sacrificing either.

Watanabe's work breathes new life into these archetypal stories, turning them into a new experience altogether. Even minor details like Spike's fighting style being based on Bruce Lee's Jeet Kune Do and Mugen's being based on breakdancing add depth to their characters. Spike is generally calm but incredibly skilled when he fights, while Mugen is wild and undisciplined, but is a master of his own style (which is implied to be largely self-taught). Using such familiar elements in a completely new way is what makes Watanabe's work so distinctive. Sometimes it's played for laughs, other times it grows into something transcendent, but one thing is certain: there's no experience quite like a Watanabe show.