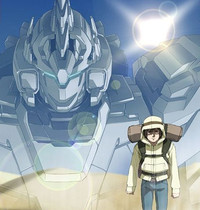 “Gundam UC”, based on a story by author Harutoshi Fukui, uses the “Universal Century” concept from the first “Mobile Suit Gundam” series as a foundation from which to build a 6 episode Original Video Animation (OVA) storyline arc. With this fourth episode, the saga enters into the second half with new characters.

In addition to Blu-ray Disc release, on-demand streaming is scheduled.