Release delayed till January 2012 to include high-definition experience 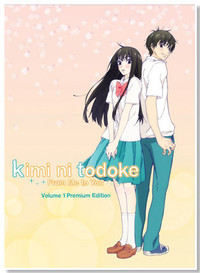 Now, the what should be good news to most fans: Instead of being a DVD only release, Kimi ni Todoke: From Me To You Volume 1 Premium Edition will now be a DVD/Blu-ray combo pack release. Volume 1 will now be released on January 10th, 2012 for $69.99 MSRP and will include 12 episodes on 2 DVDs and 2 Blu-rays. The premium edition comes in a sturdy slip-case and also includes a 28 page hard cover art book that covers the first 12 episodes.

Now, the very good news. Included in the press release is the following sentence: "The 2nd season of kimi ni todoke -From Me to You- Premium will be also available in 2012!" In one heck of a silent announcement, NIS America has also picked up the 12 episode second season of Kimi ni Todoke that aired earlier this year. Further details will be announced at some point later.

Update: NISA has confirmed that they have licensed season 2 of Kimi no Todoke. Updated paragraph accordingly.