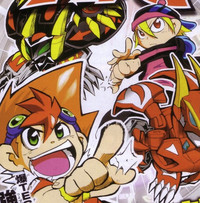 With Bakugan, the transforming card battle series, it's a little hard to tell where the toy and the anime respectively end and begin. However, we've just learned that Shingo's manga BakuTech! Bakugan will be animated.

The anime follows Harubaru Hinode and his childhood friend and rival Raichi Kuronashi as they battle with their BakuTech, which are superior to normal Bakugan due to special metal parts. Harubaru prefers his Flare Dragaon, while Raichi's favorite is Destroy Munikis.

BakuTech! Bakugan has been serialized in Monthly Corocoro Comic since September 2010 and has three tankobon volumes so far. It's unclear if this will be presented as a spin-off or continuation of Bakugan Battle Brawlers, the fourth season of which aired in North America last year. No word yet on broadcast info or staff for BakuTech! Bakugan.