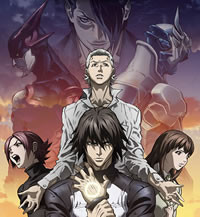 The official website of the April TV anime series Zetman is streaming a 90 second promotional video. The video is available on the PV section of the website and might not start playing until the video has completely loaded.

The animation is being handled by TMS Entertainment with Osamu Nabeshima (D.Gray-Man) directing and Gabriele Roberto doing music, including the BGM heard in the video. The series tells the story of the mysterious young man with a lump on the back of his hand, Jin, whose sudden encounter with a strange-looking bloodthirsty killer with super powers changes his life.