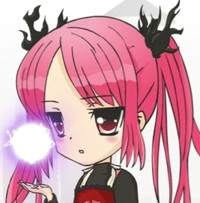 When H.P. Lovecraft started writing horror stories about giant alien monsters and sinister gods who secretly control the universe, he probably never dreamed they would one day be made into a light novel and anime series about cute alien girls i.e. Nyarko-san! Another Crawling Chaos. But sometimes the line between unspeakable horror and heartwarming moe is paper-thin, especially when there are lots of horriﬁc fork-stabbing scenes. 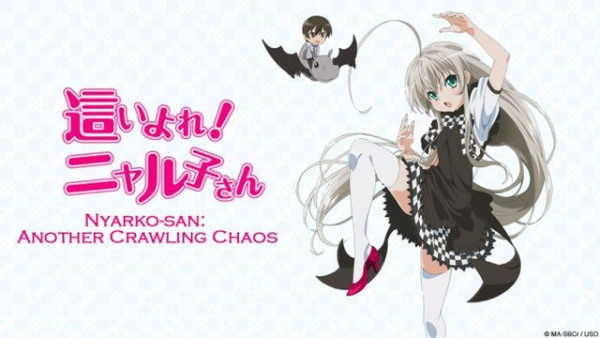 We've already explained the hideous truth of how Nyarko is based on the evil god Nyarlathotep, but what about Kuko, the ﬁery alien chick who has a deep, abiding passion for our heroine? H.P. Lovecraft's octopus-headed monster alien Cthulhu is spelled "Ku-tou-ru-fu" (クトゥルフ) in Japanese katana, so you might think Kuko is based on Cthulhu, but you'd be wrong, wrong, WRONG!!! 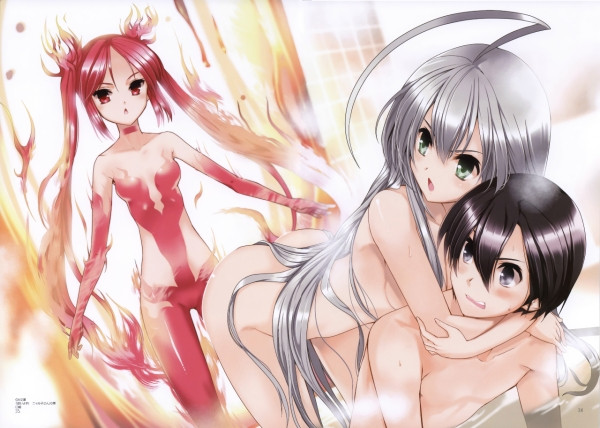 In fact, she's not even based on a Lovecraft creature. Kuko is actually based on Cthugha, a ﬁre god invented by August Derleth, one of H.P. Lovecraft's friends who also wrote stories in the same universe. (There's a reason for the similarity in names, but more on that later.) Cthugha is, basically, a shapeless giant living ball of ﬁre imprisoned in outer space near the star Fomalhaut, waiting for its jailors, the Elder Gods, to slack off so it can break loose and cause destruction. And if you take the katakana for Cthugha (クトゥグア) and make it into a girl's name, you get Cthuko, or Kuko. 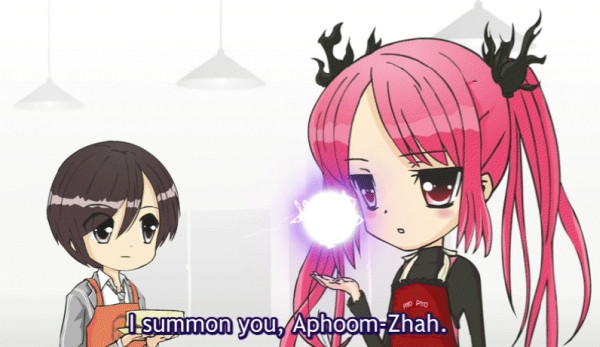 In Nyarko-san! Another Crawling Chaos Kuko, like Nyarko, is a member of an alien race, not a only-one-of her-kind god. And she's a girl, not a big ﬁery blob, which makes her easier to draw. But, she's still pretty badass, and like the original Cthugha, spends a lot of time burning things. With her immense power over ﬁre, she can easily melt cream cheese just by holding it, as seen in ONA episode 8.

Furthermore, she can summon one of her fellow ﬁre-entity buddies, the deity Aphoom-Zhah, who freezes things instead of burning them! If Kuko were ever to apply her tremendous power to cooking, clearly, the Earth would shake with terror. 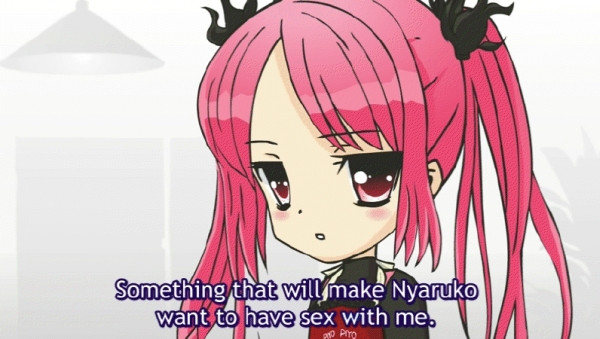 But, of course, Kuko's one deﬁning power is her desire to do hot steamy sweaty things with her ex-classmate Nyarko. This love-rivalry with Nyarko is probably inspired by Cthugha's rivalry with Nyarlathotep, which was invented by August Derleth in his 1944 story "The Dweller in Darkness." Perhaps Nyarlathotep and Cthugha, too, really just want to get it on. The answer lies buried somewhere in Kuko's love-crazy, yandere subconscious, that burns like the molten core of a star under her cool exterior.

Jason Thompson is the author of Manga: The Complete Guide and the artist of the H.P. Lovecraft graphic novel The Dream-Quest of Unknown Kadath and Other Stories. He also does the webcomic/graphic novel King of RPGs (with Victor Hao).
Tags
nyarko-san, h.p. lovecraft, spring anime 2012
« Previous Post
VIDEO: The Magic of Nine-Year-Old Caine's Cardboard Arcade
Next Post »
"Steins;Gate" Character Grows up in "Robotics;Notes"
Other Top News
13 Comments
Sort by: