Theatrical release planned for the end of the month, with digital, DVD, and Blu-ray later in the year 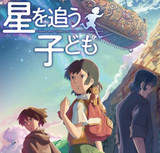 Last November, Ontario, Canada's Waterloo Festival of Animated Cinema was planning to screen Makoto Shinkai's (5 Centimeters Per Second, The Place Promised in Our Early Days) Children Who Chase Lost Voices, but canceled when a then unnamed North American company licensed the film.

It soon turned out that Sentai Filmworks had registered the domain http://childrenwhochaselostvoices.com, with the discovery coming shortly after Sentai's announcement of the license for the one-shot OVA This Boy Can Fight Aliens from Children rights holder CoMix Wave.

The distributor had been cagey in answering questions about the license, but this week Sentai Filmworks has confirmed that they hold the license for Makoto Shinkai's latest. The feature will begin theatrical release June 26 – July 3 at the Nuart Theater in Los Angeles. General release through digital channels will follow with a home video release on DVD & BD later this year.

The latest brainchild of writer/producer/director Makoto Shinkai, the pioneering creator who first turned the Japanese animation industry on its head by producing the hit VOICES OF A DISTANT STAR almost single handedly using his own personal computer,CHILDREN will be Shinkai’s longest and most complex film to date and promises to further continue the director’s evolution as one of the most important emerging talents in the animation industry.  Joining Shinkai once again are some of his most trusted collaborators, including composer TENMON, who has created the score to every Shinkai film since the director’s first short, SHE AND HER CAT; animation director/character designer Takayo Nishimura and art director Takumi Tanji, who have both risen up the production chain with Shinkai, having begun as an animator and background artist respectively on THE PLACE PROMISED IN OUR EARLY DAYS and 5 CENTIMETERS PER SECOND; and most especially the ground-breaking production company ComixWave Films, which has distributed all of Shinkai’s major works to date.

Strange sounds in the darkness…  Unearthly music from an old crystal radio…  These are all the warning Asuna Watase has before a simple walk to her clubhouse catapults her into a nightmarish adventure that will take her beneath the Earth to a lost land beyond the realm of legend!  Attacked by a strange monstrous creature, rescued by a mysterious stranger and pursued by a relentless enemy, Asuna finds herself enmeshed in a centuries old mystery that will bind her to a strange young defender and lead her inevitably, towards a secret that may hold the key to life itself!  From Makoto Shinkai, the critically acclaimed anime wunderkind who’s thrilled audiences around the world with the masterworks VOICES OF A DISTANT STAR and THE PLACE PROMISED IN OUR EARLY DAYS, comes an all new, dark and truly epic journey into a world you’ve never seen before: CHILDREN WHO CHASE LOST VOICES!