VIDEO: 5pb.'s "Akatsuki no Goei" Heads to PlayStation 3 and PSP

A pair of previews show off the visual novel ports, due in Japan on September 20th 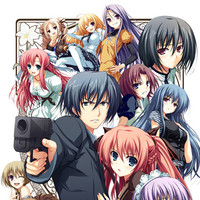 Two previews show off 5pb.'s (Steins;Gate) effort in bringing the PC visual novels from Akatsuki no Goei Trinity to the PlayStation 3 and PSP. The series follows a body guard in training from a near future where the role of police in society has diminished. Due out in Japan September 20th, the ports will feature new opening movies and theme songs.

Tags
5pb., akatsuki no goei trinity
« Previous Post
Western "Tales of Xillia" Release to be Identical to Japan's
Next Post »
A Look Through Fate/zero's Irreverent Script Covers
Other Top News
6 Comments
Sort by: