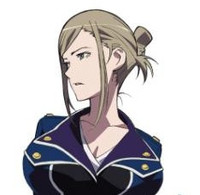 Not long after we posted the most recent 30-second promo for original TV anime K, Viz Media swooped in on Twitter and announced the series' acquisition. K will make its way to Viz Anime this October.