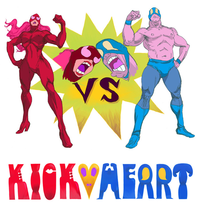 Fresh out of this weekend's Masked Ball preview celebration, there's a new official trailer for the upcoming short film directed by Masaaki Yuasa, Kick-Heart. The production, in partnership with Production I.G., was made possible by thousands of generous supporters who helped backed the project on Kickstarter.

Over a Million Tune in to Toonami's "Evangelion 2.22" Broadcast