"Zelda Musou" hits Wii U in Japan this August, arrives west in September 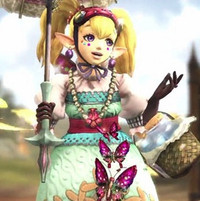 The latest gameplay footage from Hyrule Warriors (Zelda Musou) focuses on Agitha from The Legend of Zelda: Twilight Princess. Agitha battles with her parasol, can call upon insects for assistance, and more, so see some of what she's working with below.

Previous gameplay footage included Link in combat, Link using his Fire Rod, Impa fighting with her massive sword, the one and only Princess Zelda, and original character Lana.

After it debuts on Wii U in Japan this August, Hyrule Warriors heads to Europe and North America on September 19 and 26, respectively.