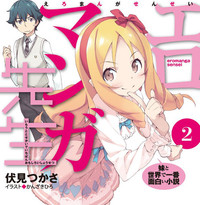 While exact details are coming later from Dengeki and Nico Nico webcast, @kirino_kousaka and @kuroneko_daten have been Tweeting and bickering about a crossover between Tsukasa Fushimi and Hiro Kanzaki's Oreimo and their newer light novel series Eromanga-sensei, the fifth volume of which is scheduled for September 10th. Fushimi will write the mystery project, tentatively titled "Majority Drama."