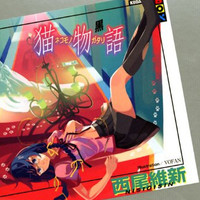 At latest weekend's Anime Central event, North American publisher Vertical announced release plans for NISIOISIN's Nekomonogatari, the  fourth part of the Monogatari series - the sixth and seventh books overall. Its "Black" is the final book of the first season and "White" is the first book of the second. Along with this, they also announced new plans for a Flowers of Evil omnibus collection of Shūzō Oshimi's 2009-2014 manga.

Flowers of Evil Complete (omnibus) coming.
Trying to get new art for the covers and color inserts from the magazines
Image is a placeholder pic.twitter.com/HmjmgcRwpK

Ajin 9 was released in March, catching up with the Japanese release. There will be a wait for the next

She and Her Cat

Arakawa Under the Bridge (coming in 7 2-volume omnibuses)

Scott Green is editor and reporter

for anime and manga at geek entertainment site Ain't It Cool News. Follow him on Twitter at @aicnanime.

FEATURE: What Makes The Existential Dread Of Flowers of Evil Work So Well?