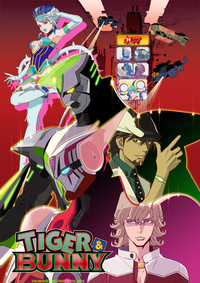 San Francisco, CA, June 21, 2012 – VIZ Media, LLC (VIZ Media), the largest publisher, distributor and licensor of manga and anime in North America, marks its highly anticipated return to Anime Expo® 2012 with the announcement that it will welcome special show personal appearances by the Japanese Producer along with several top American voice actors from the hit anime action series, TIGER & BUNNY.

Anime Expo is the nation’s largest anime convention and will take place at the Los Angeles Convention Center in Los Angeles, CA from June 29th to July 2nd. VIZ Media will be located in Booth 1401. Information on Anime Expo is available at: www.anime-expo.org.

VIZ Media will welcome TIGER & BUNNY Producer Masayuki Ozaki as its exclusive guest for a very special panel discussion to be held on Saturday, June 30th, 12PM to 1:30PM in Room LP1. Masayuki Ozaki began his anime career in 2004 at Sunrise, Inc., where he was a planning manager for Mobile Suit Z Gundam. He went on to play an important role in producing anime features including Dinosaur King, INUYASHA: THE FINAL ACT (distributed by VIZ Media), andGintama: The Movie. In addition to producing anime, Mr. Ozaki produces a variety of live music events, musicals and other areas of show business.

VIZ Media will augment the TIGER & BUNNY fun at the Saturday panel discussion by also welcoming the talented voice actors that brought the characters to life for North American fans. VIZ Media plans to release the TIGER & BUNNY series on Blu-ray and DVD in 2013. Anime Expo attendees won’t want to miss the opportunity to meet and question the English cast members in attendance, including:

Also on Saturday, catch Mr. Ozaki and the TIGER & BUNNY voice actors at the South Hall Autograph Area at 3:30pm, where fans will have the opportunity to meet everyone at an in-booth signing session.

TIGER & BUNNY (rated TV-14) is set in Stern Bild, a metropolitan city where superheroes called NEXT help to maintain peace. Sporting sponsor logos on their suits, these heroes work to solve cases and save people’s lives in order to earn Hero Points, while also helping to improve the public image of their corporate sponsors. Their activities are documented and broadcast by the popular show “HERO TV,” in which each superhero strives to become the “King of Heroes” of the year.

One such hero is Wild Tiger (real name Kotetsu T. Kaburagi), a veteran superhero who relies on his years of experience and instincts to fight crime. Though obligated to work for his boss’s best interest, Kotetsu follows his own code of honor and is even willing to cause destruction to public property for the sake of protecting the lives of his fellow citizens. Over time, he has grudgingly earned the nickname “Crusher for Justice.” Now, Kotetsu suddenly finds himself forced to team up with rookie hero Barnaby Brooks Jr.

For more information on TIGER & BUNNY and other animated titles from VIZ Media please visit www.VIZAnime.com.