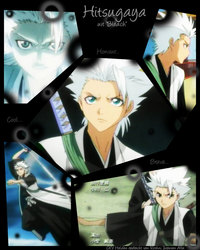 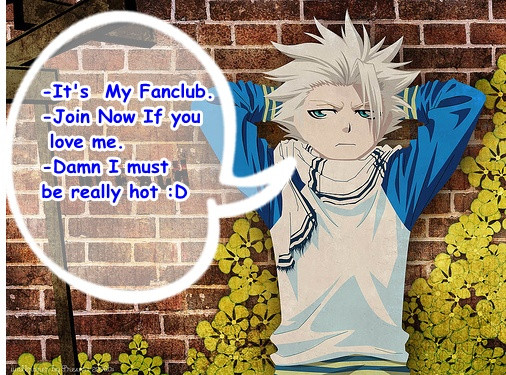 >>this is 4 ppl who is interested or likes hitsugaya toshirou. or enjoys watching bleach :)
>>it would help if invite ur friends or buddies to make this group a better group.
>>plz answer in the forums or even start new ones?? (:
>>upload pics of hitsugaya (:

>>*random* im aware i spelled his name wrong XD im sry fer that lol
>>shrimpy: i have 2 say great thnks 2 animeluvergurl101. thnk u fer inviting your friends & thnk u for starting forums ^^ & thnk you mods for updating the group. (: and if u have any other info of hitsugaya. feel free 2 post them in the forums ^^ great thnks.
>>and thnks jenny fer spamming the forums and guestbook wall XD

Hitsugaya comes from Junrinan, District 1 of Rukongai. There he lived with his grandmother, Momo Hinamori, and possibly other people. Little else is known about his past, but it is known that he became a shinigami shortly after Hinamori. He is also a friend of Jidanbō, the West Gate Keeper, and was the one who taught him the "city rules."

As a child, Hitsugaya was a bit of a brat who liked to eat watermelons and poke fun at Hinamori. She would call him "Shiro-chan" (Lil' Shiro in the English dub) and he would retort by calling her "Bed-wetter Momo." The two were close friends and Hitsugaya, despite being younger and much shorter than his friend, always felt that he needed to protect her. Early in his childhood, he boasted that he was the undefeated champion of spinning tops in Jurinan.

With Hitsugaya's natural talent, he quickly entered the shinigami institute shortly after Hinamori, despite his age. She continued to call him "Shiro-chan" out of habit and felt she needed to protect him. Because of a promise she had made, she only began to call him "Hitsugaya-kun" after he had achieved his zanpakutō's shikai and was recognized as a shinigami. Highly capable and knowledgeable, he quickly became the youngest of the captains within the Gotei 13.

Hitsugaya is generally mature and serious, in contrast to his free-spirited lieutenant, Rangiku Matsumoto. Despite their personality differences, he and Rangiku seem to be very close. Hitsugaya is shown to also be easily annoyed by others goofing off or drawing unneeded attention to themselves, as shown when he led a team of shinigami into Ichigo Kurosaki's school. Hitsugaya hates anything that he deems childish and hates being described as something close to a child, as seen in episode 132 when he meets Ichigo's sister Karin. This is more shown in the omake chapters, where he is mistaken as a child, much to his annoyance. During the ending credits of Sealed Sword Frenzy, he was in the human world and dressed in a young boy's school uniform, and Hinamori had to drag him out of hiding. He is overly protective of Momo Hinamori, due to fact that they were old childhood friends. Fitting with the nature of his zanpakuto, Hitsugaya dislikes summer and warm weather in general.

Hitsugaya's zanpakutō is Hyōrinmaru "Ice Ring", idiomatically "Full Moon". When sealed, Hyōrinmaru looks almost exactly like a normal zanpakutō with the exception of the guard, which is in the shape of a four-pointed star. The hilt is light-blue while the sheath is a deep blue, which matches Hyōrinmaru's abilities. Hitsugaya is the only shinigami that carries his zanpakutō on his back aside from Ichigo Kurosaki, whose zanpakutō necessitates such a style. Hitsugaya's short stature and the blade's length may explain the similar style. His sheath dissolves whenever he draws his sword. Hyōrinmaru's shikai command is "sit upon the frosted heavens."reign over the frosted heavens," English TV: "reign over the frosted frozen sky"). Hyōrinmaru is the strongest of all water-ice element zanpakutō in Soul Society.

In its shikai, Hyōrinmaru itself remains the same, but gains a crescent-shaped blade attached to the hilt by a chain. Hyōrinmaru allows Hitsugaya to control water and ice. The slashes created by Hyōrinmaru gives off an immense amount of spirit power which overflows from the tip of the blade, creating a flow of ice shaped like a Chinese dragon. The dragon flies at opponents and instantly freezes anything it touches. The chain-blade also freezes anything Hitsugaya traps with it.

Hyōrinmaru's bankai, named Daiguren Hyōrinmaru. Great Crimson Lotus (Mahāpadma) Ice Ring, Viz: Great Roaring Coldly Shining Moon), causes ice to flow from Hyōrinmaru onto Hitsugaya, forming into two large wings and a tail. Ice also forms into a dragon's head around his sword hand, encasing it up to the hilt; which is in the shape of an eight-pointed star. His left arm is covered fully until the wrist where it then spans into claws, leaving his hand and fingers free. Hitsugaya's feet are encased in ice in a similar manner to his left hand. Additionally, his wings are capable of folding around him to serve as ice shields. In various Bleach games, as well as in the anime, the wings can be used by Hitsugaya to fly. Three "flowers" of ice, shaped similarly to the lotus shaped guard of his zanpakutō, are also created behind Hitsugaya with four petals each, which melt away as Hitsugaya attacks.

Hyōrinmaru's bankai has two known special techniques. The first is "dragon hail flower" which freezes any enemy Hitsugaya stabs, locking them into a cocoon of ice and freezing them to the core. Once frozen, Hitsugaya can shatter his opponent. The second is "thousand years ice prison" which forms a multitude of ice pillars using the moisture in the atmosphere. These pillars then envelop the enemy. 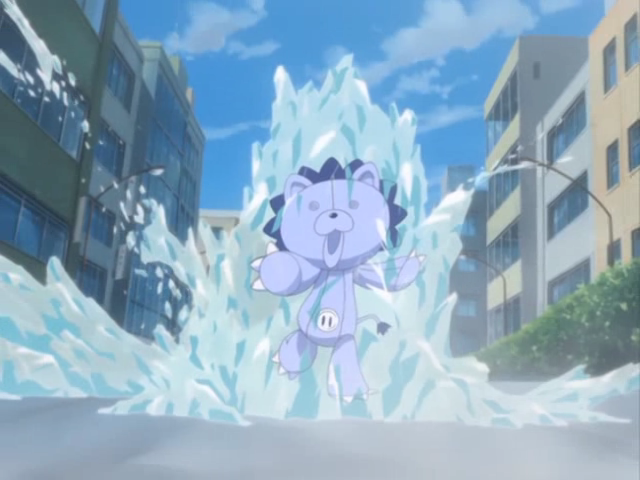 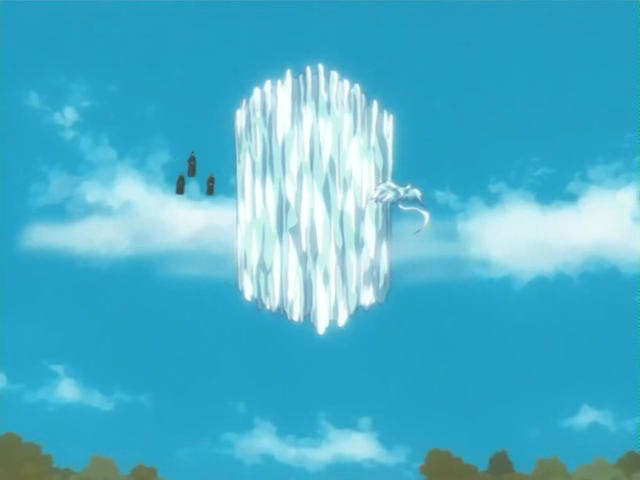