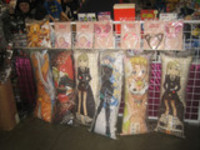 For Sale: The Internet, Or: The Anime Boston 2011 Dealer’s Room

Most anime convention reports consist of people talking about the convention’s guests, musical acts, and pictures of the people in costume. But I don’t particularly care about any of that stuff. My preferences tend towards the slightly less…glamorous side of anime conventions. The way I see it, if I want to look at the costumes I can always check all the cosplay sites after the fact to see high-resolution, professional-quality photos that'll beat the pants off anything I could ever snap with my phone or point-and-shoot pocket camera. The anime music videos will all get posted online too. Autographs are okay for a souvenir, but I don’t much care for musicians and I don’t really listen to English dubs so getting autographs from the people involved in them isn’t that high on my priorities list. So what else do anime cons have to offer?

Well for one, there’s the dealer’s room. If you’re like me, you probably think the dealer’s room is mostly obsolete considering there’s Amazon, Right Stuf, Hobbylink Japan, and a variety of other online retailers. But paying for shipping is no fun, and as much as we think we’re able to control the urge, instant gratification is a formidable beast to overcome. So it goes that the dealer’s room remains a top destination at every major anime convention.

These days it seems as though FUNimation is the only truly major player left as far as releasing anime in the US, and the very first thing that greeted all Anime Boston attendees upon entrance to the dealer’s room was their booth. It was pretty obvious which anime titles were considered their flagships for the opening months of 2011:

(On a side note, the amount of Hetalia costumes appeared to have significantly decreased compared to last year. Or at least, nobody in WW2-era German military outfits saw fit to take photos by the synagogue on Easter Sunday like LAST year!)

At first glance, the Anime Boston dealer’s room seems rather sparse. Congestion and traffic are kept to a minimum thanks to there being plenty of space separating many of the booths. Then you realize…there is an entire OTHER section of the dealer’s room beyond the hallways! It’s a pretty massive place—and the Artist’s Alley is separate!—yet strange though it may seem, anime and manga-related items seem to have a secondary presence at anime convention dealer’s rooms compared to “Geek/Gaming/Internet culture” purveyors. The halls at anime conventions are teeming with people willing to BE THE INTERNET, and so the dealer’s room responds to this demand by being the place for those people to supply themselves. The most commonly sold items aren’t Naruto headbands (thank goodness), but T-shirts. “Clever,” “nerdy,” or—dare I say it—“ironic” T-shirts were all over the place at the Anime Boston ’11 dealer’s room:

Dealer after dealer after dealer had these things for sale. Got some pop culture imagery, an Internet catchphrase, a “macro” image, or a combination of all of the above? Chances are good there’s an unlicensed bootleg T-shirt there for the taking:

Seriously, these shirt vendors were all over the place. And if $15-$20 for a “wacky” T-shirt (aka a roughly 300-400% markup over their cost to be bought and printed) was too rich for your blood, don’t worry. They’ve got buttons and stickers too for all your hipster needs. BECAUSE THAT IS WHAT YOU ARE IF YOU BUY THESE THINGS, REGARDLESS OF THE REASON YOU TELL YOURSELF:

But the catch-all “geek” banner isn’t the only thing creeping in on the “anime” turf. The latest sci-fi/fantasy con import to the anime convention circuit is “steampunk,” a fancy term that means “try to dress up as if a dumpster threw up on Abraham Lincoln” according to “I’m Not Your Captain” Dave Merrill. But wherever could one procure both a top hat AND goggles? THE DEALER’S ROOM, THAT’S WHERE:

While at the same time, fans grow more and more hesitant to buy anime and manga despite some really excellent deals to be found:

Therein lies your answer as to why anime convention attendance continues to increase as anime / manga sales gradually decline: the anime cons are being populated more and more by fans who spend most of their money on something else first and foremost. Concurrently, arguments abound over whether one can answer “does anime itself have any monetary value anymore?”—especially considering how so much is available via streaming sites LIKE THIS ONE—but one thing remains true: fan demand for merchandise is as high as ever. Fans genuinely want to buy just about anything with their favorite characters on it: hats, wallscrolls, figures, keychains, you name it. As the old saying goes, “you can’t download a shirt.” [Yet.]

Still, just keep in mind that the next time someone tries to talk about “Cool Japan,” what they’re actually talking about is decidedly UN-cool stuff like this:

Keep in mind that at least one of those Maka hump pillows got sold moments after this photo was taken. (“Hug” is a euphemism for what people really use these things for.) Of course, not everything was on the up-and-up. Bootleg DVDs are virtually a thing of the past at anime conventions, but merchandise is a much trickier area to pin down. I guarantee you those shirts are by and large not legit, and the same goes for most of the wallscrolls. But while I don’t know if these are “the real deal” or not, they’re certainly ahem, “not real” in some way or the other:

If you’re a fan like me, you’re probably not exactly frothing at the bit to purchase any of the items I’ve pictured thus far. When it comes to merchandise, only about four words come to my mind: “show me the robots.” Gundam model kits and Revoltech mecha figures had a very strong presence (which you’ll have to take my word for since I don’t seem to have photos!), and one or two dealers even had crazy vintage stuff at even CRAZIER vintage prices. Still, man: Gundam! Macross!

Sadly, those were far too expensive for my broke self, to say nothing of the Shogun Warriors Grendizer, G1 Transformers, and Voltron. That’s lion AND vehicle! PS: if you’re thinking of asking “but, but what about Albegas [HAHAHA I BET YOU DON’T KNOW ABOUT ALBEGAS BECAUSE I AM ASKING THIS QUESTION TO DEMONSTRATE THAT I AM IN FACT SMARTER THAN YOU]” then I’m thinking of pointing at you and shouting NERRRRRRD because you’re undoubtedly thinking the part that’s in the square brackets as you ask!

The Anime Boston dealer’s room is quite the monstrosity, yet for years I’ve refrained from buying more than a few volumes of manga or DVDs on account that I fly in to the convention and don’t have much space in my carry-on luggage. Three years I’ve been going to this convention, and it was only on Sunday as I was leaving this year that I noticed there is a freakin’ US Post Office branch located in the mall that is connected to the convention center! Dear Anime Boston: please do more to publicize the fact that people can opt to ship their purchases via USPS at the nearby Post Office branch, as FedEx is too rich for most of our tastes and most of the convention traffic is spent going between the Hynes convention center, the Sheraton hotel, and the food court such that we’d never even see that the Post Office exists.

Oh man, the food court! Interesting thing about that at Anime Boston 2011, actually. But that’ll have to wait for another time. TO BE CONTINUED…?

Daryl Surat is a co-founder of the Anime World Order podcast and a contributing writer for Otaku USA Magazine. Translation: he's but a shell of a man who has discarded his humanity, soul, and any semblance of a social life for the sake of Japanese cartoons, comics, video games, pro wrestling, action cinema, and anything involving the resolution of conflict through the application of violence.