Inside the Resident Evil Shooting Bar! 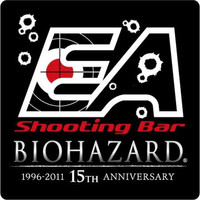 Capcom’s famed Biohazard (AKA Resident Evil) video game franchise turns 15 years old in 2011. And what better way to celebrate impending adulthood than by blasting holes into paper targets with model guns while slurping down food and drink?

This is the brilliant idea behind the Biohazard 15th Anniversary × Shooting Bar EA , a limited time collaboration space open to the weapon-wielding public from May 20th to June 19th in Tokyo’s Kichijoji ward. And it was only by the grace of friends in high places that I managed to infiltrate the opening press event on 5/17.

EA (sounds like “air”) already was a “shooting bar” before the Capcom guys gave it a spooky atmospheric makeover. It’s one of several such places in Tokyo where you can knock back a few drinks and blow off steam by renting out an air-soft gun. After all, firearms may be highly illegal in Japan, but you gotta get your kicks somehow...

The 15th anniversary shooting bar goes several better by remaking the interior of EA into a dead ringer for the fictional headquarters of Raccoon City Police force S.T.A.R.S. complete with maps and fearsome paper zombie-cutouts.

Super-realistic pistols, rifles, and light machine guns manufactured by the Tokyo Marui company lined the walls, tempting nearly everyone at the press event to pull them down and start hosing the place down with BBs.

But before the fun on the range could begin, the assembled masses gathered for a short press conference from Capcom folks who went over the basics, including details about the upcoming Resident Evil: The Mercenaries and Resident Evil: Revelations games for the Nintendo 3DS.

Then, everyone bum rushed the busy bartender to load up on free drinks, which included alcoholic G-Virus Vaccine, T-Virus Vaccine, and (the best of the lot) Three Herbs Cocktail.

There were also all manner of wacky themed food items to choose from, including "Raccoon Chicken" (hopefully not made out of real raccoon!) and, ouch, "Pie-o-hazard" (below).

Finally! It was time to hit the range and do what we came there to do: shoot holes into paper targets of fearsome foes from the Biohazard / Resident Evil franchise! The shooting game consisted of taking aim at targets 10 meters away with a “Samurai Edge” replica pistol and then trying to hit the illustration as much as possible with only 26 shots. Maybe it was the Three Herb Cocktail dancing around in my nervous system, but I did terrible!

I reckon I’ll get a chance to do better when I return to the Biohazard 15th Anniversary × Shooting Bar EA later this week with some other friends who want to see what the fuss is all about. So note to Capcom and EA: Keep the Raccoon Chicken warm for me!