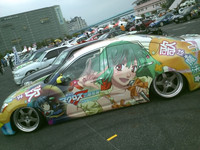 The 4th annual ItaG Fest event was held on May 22nd in Tokyo’s bayside Odaiba district. Over 1000 tricked out anime cars, motorcycles, and even bicycles commanded a king-sized parking lot for the day, while assorted otaku, cosplayers, and nuts of all stripes descended on the area.

Folks in Japan call such anime-customized vehicles "itasha" (“pain mobiles”), but the experience was supremely pleasurable.  After all, here was a display of creativity and individuality taken to the nth degree.

And there I was, covering the event for my web show Otaku-Verse Zero, which is (of course) viewable right here on Crunchyroll! In between takes, I managed to take a ton of pics. And I’ll be sharing the best of them with you over the hours and days ahead. So start your engines!

As you can see, the scene at ItaG Fest vaguely resembled a cross between an outdoor auto show and a flea market, albeit with pimped-out anime mobiles everywhere. Proud itasha owners from all over Japan rode up to proudly display their wheeled wonders.

ItaG Fest was not only an exhibition, but also a competition as well! And among the top anime cars in the running for big trophies, blue ribbons, and other "Best in Show" accolades was this stunning Panty & Stocking itasha. If only they had made some room for Garterbelt as well!

This Macross Frontier mobile, covered in images of idol singer Ranka Lee was also up for the grand prize.

Here’s a side shot of the very same Ranka itasha…

Vocaloid-inspired cars and cosplay were HUGE at ItaG Fest, so much so that I’ll be doing an entire separate report devoted to them. In the meantime, here’s a taste of things to come with via a cameo by Kagamine Rin.

Want to know how to get respect on the mean streets of Tokyo? Drift around town in this Girls Dead Monster machine! After all, everyone fears and respects Angel Beats!

Stop the press! Comedy gold! Someone made a Lucky Star joke using the Lucky Strike cigarettes logo!  (Note police car in background, possibly casing the joint out for copyright infringement and public smokers).

For my money, these were the two Most Dangerous cars at all of ItaG Fest. And destiny saw fit to put them side by side! At left, the Gunbuster mobile! At right, the Neon Genesis Evangelion Ayanami Rei memorial traveling van. Dare we take a closer look at both?

The car at right is a true “Buster Machine”, inspired by the classic GAINAX anime Aim for the Top! AKA Gunbuster. Please note realistic pilot uniform dangling from the hood! Like some kind of crazy otaku fish bait, it drew me nearer and nearer…

I should have known better than to peek inside the car’s interior, but I couldn’t help myself. My prying was rewarded with the sight of a Noriko dakimakura pillowcase, another uniform, and a back seat filled with otaku compost. I don’t even want to know what the story is behind that gear shift…

The back of the van (open to the public) looked like a portable shrine to the aloof blue-haired heroine of Evangelion, complete with Rei figures, pillows, tie-up coffee cans, and disconcerting yellow chians. The crowning touch was a working Eva slot machine (!!!) at left.

Here’s the driver’s and passenger’s seats inside the van. But there’s no hint at all of a steering wheel, brake controls, or indeed, even seats themselves! Instead, the space is reserved for many, many well deserved trophies and mementos from countless other itasha events!

Everyone’s a show off of some sort or another at ItaG Fest, and this guy would like you know that he never goes far without an impressive collection of K-On! Plushies inside his car…

There’s no real “right way” to end a post like this. But this image of a guy crawling on the pavement trying to take a picture of a couple of RC cars seems to be symbolically fitting somehow. Stay tuned to CRN for further mind-expanding reports from ItaG Fest 2011, including all-Vocaloid and all-cosplay posts!

In the meantime, contemplate the true power and majesty of otaku passion and spirit via the gallery of images below!