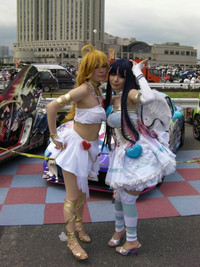 Hello and welcome to Part Two of our coverage of ItaG Fest 2011! Be sure to check out Part One, if you haven’t already…

Here’s a brief re-cap for those of you who are just joining us:

The 4thannual ItaG Fest event was held on May 22nd in Tokyo’s bayside Odaiba district. Over 1000 tricked out anime cars, motorcycles, and even bicycles commanded a king-sized parking lot for the day, while assorted otaku, cosplayers, and nuts of all stripes descended on the area.

Vocaloids! A whole team of them in fact, featuring Kaito, Miku, Luka, Meiko, Rin and Len! They were camped out at the booth behind them and were at ItaGfest to sell a selection of Vocaloid car stickers. Hard work, but someone had to do it…

A picture perfect angelic pair dressed as Panty and Stocking stood nearby, in front of the soul stirring P&S itasha car seen yesterday.

With top flight talent such as this on display, pretty much everyone who came to ItaG Fest 2011 was inclined to stop and snap a few pictures of the cosplayers…even the cat-eared cosplayers themselves!

One of the biggest gathering that day was for weapon-brandishing Angel Beats! cosplayers...

The guy in the blue wig (at least, I think it was a guy) seemed to be in charge of the gathering, and moved others around like chess pieces during the photo shoots. Maybe having the biggest air-soft gun in the parking lot has it's perks after all.

I don't want to shock you or anything, but there was also a fair amount of crossplay at ItaG Fest 2011. That maid is a man, baby. (Sorry for the rumpy quality on this pic. I had to take this one on the DL, if you know what I mean...).

I also felt it pertinent to keep my distance from the main stage, where the “race queen” handing out trophies or Best in Show cars was one of those truly terrifying “dollars” – or a person wearing an oversized head shaped like an anime character. The whole thing seemed to say, "I'LL SWALLOW YOUR SOUL!"

Now since you've braved the terrors of ItaG Fest 2011, it's time to end on a high note: a full body shot of those heavenly Panty & Stocking cosplayers...stay tuned for Part Three of our coverage, which promises to be an all-Vocaloid blow-out!

Patrick Macias is the chief editor of Crunchyroll News. His blog can be found on-line at patrickmacias.blogs.com.,