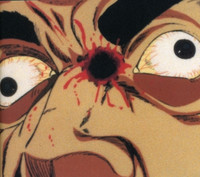 WARNING! GRAPHIC CONTENT AHEAD! NOT FOR THE MEEK OR FAINT OF HEART!

As dedicated readers of this web site know, anime has the capacity to be the greatest form of visual entertainment there is. But why is that? Certainly, if asked why this is, particularly by non-fans, fans of anime are typically inclined to point to a variety of “dignified” reasons, perhaps mentioning that Oscar Spirited Away won nearly a decade ago. (I’d offer another example, but anime movies haven’t won since or prior.) But here, protected by the privacy veils permitted by the Internet upon which this fandom subsists, we can see the REAL answer, and that answer is “sex and violence.”

Indeed, when it comes to cartoon violence, anime is without peer. Or was, anyway: back when I was a teenager in the mid-1990s, most of the anime I saw was in the form of theatrical movies and direct to video titles which weren’t subject to the kind of restrictions broadcast television has. Blood, guts, and the occasional exposed boob were the norm. Nowadays, TV series account for the majority of new anime being produced, so the only place you really see extremely violent material is within anime that’s either produced for Japanese satellite pay TV stations such as WOWOW (where Shigurui: Death Frenzy and Baccano! were shown, among others) and AT-X (Elfen Lied, Highschool of the Dead, etc) or titles like Gantz that were broadcast edited then later sold uncut on DVD. The era of ultraviolence is fading away. For the sake of THE CHILDREN, the gruesome toon slaughter of yesteryear MUST be preserved!

Therein lies the raison d'être for Anime’s Craziest Deaths. If you live on the East Coast, perhaps you’ve seen one of my panels at an anime convention such as Anime Weekend Atlanta or Anime Boston. In just a few short weeks, I’ll be unleashing this beast upon the attendees at Otakon in Baltimore. The Otakon panel will be 18+, but the Internet is viewable to all! Let’s get started, shall we?

What separates a mere anime “death” from a “crazy” death? There are several factors that scholars in this field—okay fine, so it’s just me doing this FOR NOW—take into account. Novelty goes a long way, which is why Fist of the North Star has endured for so many decades. You KNOW a death is good when you see it and have to pause to figure out “wait…WHAT THE HELL DID I JUST SEE?”

That’s right. This is clearly the handiwork of Hokuto Shinken, the sacred and revered pressure point kung fu that BLOWS OFF YOUR FACE. It’s either that or this dude is going way too far to complete his impersonation of Cyclops from the X-Men. A multitude of questions come to mind upon seeing this cartoon image. Why is the blood only erupting forth like a geyser in ONE STRAIGHT LINE? Does blood only get provided to the face from the part of the body where your eyes would be? Why is every bit of that guy’s skull gone EXCEPT for his entire upper jawline, complete with gums? Say, this guy’s got some pretty white and straight teeth! Be that as it may, WHY IS EVERYONE IN THE BACKGROUND SO UNCONCERNED OVER WHAT THEY’RE SEEING?!

Details count for a lot in making a “death” one of anime’s craziest. Take this gem, from Akira aka “the anime I wish all other anime was like”:

Getting shot in the gut is pretty pedestrian as far as ways to die in a cartoon is concerned, but the details afforded by theatrical animation and 1980s-era production budgets make this moment the appetizer to a film which is home to many of Anime’s Craziest Deaths. Just look at how much blood this guy has lost. There is so much freaking blood on the pavement that when he slides his left hand along the ground, IT LEAVES A FLUID DYNAMIC WAKE. And that’s where the movie STARTS.

Exaggeration to the point of sheer excess is a field for which animation was designed, and it’s not just for zany reaction shots. It’s also great for lookin’ at dudes getting killed! Behold how Wicked City illustrates my point. In the words of a great futuristic videogame racecar driver, SHOW ME YOUR MOVES:

Not since Punisher: War Zone (aka The Greatest Movie EVER!) has been there a more tremendously damaging punch to the face. Not only has our hero’s fist gone completely into this guy’s mouth—that alone is an achievement, try it yourself if you don’t believe me—but the next level has been attained: the punch has gone completely through, breaking out of the back of the guy’s head and neck. This dude got hit so hard his eyes flew out of his skull such that the optic nerves connecting the eyeball to the brain are somehow LONGER than the length of his entire head! This kind of punch, boys and girls, is truly one that would make Captain Falcon proud.

The victim counts for a lot too. You might say this is a corollary of the “novelty” aspect, but you don’t typically expect to see pets or animals die gruesomely in entertainment, so when they do bite it that is CRAZY. This scene from Battle Angel had better make it in, exactly as depicted here, to that PG-13 live-action version James Cameron continues to claim he’ll make after Avatar parts 2 and 3:

I tell you what: that dog showed a lot of GUTS standing up to that mohawked cyborg wearing spiked football pads, ripped Hulk shorts, and nothing else. [“HAW! HAW! HAW! HAW!” –Jack Chick] Audiences recoil when dogs or bunnies or whoever get killed, supposedly because “animals don’t even know what’s going on” or whatever. But if you ask me, I say the people who think that are the TRUE sick ones! Feelin’ not a care in the world for the plight of their nonexistent CARTOON HUMANS! You know what anime needs more of? Cartoon kitten murder. Revolutionary Girl Utena was really onto something with that.

In addition to pets, child murder, especially super-violent child murder like what you see here in Genocyber, also hits people where it counts…the cerebrum!

I know what you’re thinking. You’re thinking that kid’s entirely too old. That’s “standard anime protagonist” age. Well, the patron saint of Anime’s Craziest Deaths, Mobile Suit Gundam creator Yoshiyuki Tomino, is a master of cartoon child death. (Also, cartoon “everyone and everything” death.) His most infamous title for such hijinks is Ideon, best known in the US as something for Evangelion fans to namedrop while they bore us with OH MY GOD DID YOU SEE HOW THAT TODDLER’S HEAD JUST GOT BLOWN OFF BY A BAZOOKA

You know what else makes for a crazy death? I’m gonna get in hot water for saying this, but you rarely see women die tremendously violent deaths outside of the horror genre. Maybe that’s why so many horror movies fans are female: it’s the only genre where they can reliably see themselves get brutally murdered on camera! Baoh—which really, has got to be one of the single greatest anime ever—just threw this in at the end to wrap things up:

I show people Baoh all the time—just go back and re-read that phrase so it can sink in, don’t worry it’s cool, I’ll still be here—and this one always elicits an audible “whoa” from the crowd. Because you rarely EVER see this happen! It’s crazy, man! Look, if it makes you feel any better: she was part of an evil organization, and prior to this she shot a dog’s brains out with a gun. See? It’s okay to laugh at it now! It’s not like how it went down in Battle Royal High School. Okay fine, I laughed at that one too.

Every single thing in this death is the craziest thing ever. Every. Single. Thing. Look at the impeccable attention to anatomical detail we have going here. We’re dealing with LAYERS here. There’s the hair, then the skin on the head, the sub-dermal skull bone matter, the inside of the skull, and THEN the brains. Blood is EVERYWHERE. Distinct bits of brain and bone are flying about, some of which is stuck to the wall. And just take a gander at that eye, lovingly rendered mid-swing while still attached to the optic nerve! This, true believers, is CRAFTMANSHIP. Somebody must have spent like, a month, just drawing this. I bet they were shooting Saint Bernards in the head with a video camcorder so they could have ballistic reference of exactly how an eyeball swings, like what the bad guys wanted to do in Beethoven. The funniest part of this is that the woman was already shot 3 times prior to this final gunshot, and one of those shots was directly to the center of the forehead. MEANING THIS WAS COMPLETELY UNNECESSARY…and that’s what makes it so great!

There you have it: eight examples of Anime’s Craziest Deaths from eight different anime titles. Consider yourselves introduced! While these eight are sadly not endless since this era of anime is now largely in the past, they still are only scratching the surface; why, I didn’t even MENTION Violence Jack, Mad Bull 34, Apocalypse Zero, and others that are right up there with Angel Cop! I also intentionally omitted my personal affinity for exploding helicopters. As any Black Lagoon fan will attest, helicopters exploding accounts for a significant percentage of Anime’s Craziest Deaths. New anime titles come out every season, but in addition to those I encourage each and every one of you to seek out this sort of old-fashioned anime, watch them, and love them as I do.

Got your own Anime’s Craziest Death suggestions? Let’s hear ‘em in the comments! Chances are high I’ve already got them, but if you specify an episode or timestamp it’ll help greatly if I don’t! Do you want to see more? Possibly even…learn…more? Then come to an anime convention where I’m doing one of these panels (which is “any convention that will permit me to, provided they can get me there and give me a place to stay”!), because we’ll be watching the VIDEOS there. Remember: if you’re not there, YOU’RE ALREADY DEAD.

Daryl Surat is a co-founder of the Anime World Order podcast and a contributing writer for Otaku USA Magazine. Translation: he's but a shell of a man who has discarded his humanity, soul, and any semblance of a social life for the sake of Japanese cartoons, comics, video games, pro wrestling, action cinema, and anything involving the resolution of conflict through the application of violence.