We go hands-on with an elemental brain teaser 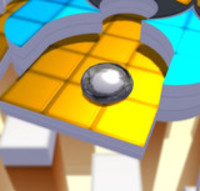 In 2005 Archer MacLean's Mercury slid its way onto PlayStation Portable and proceeded to bend the brains of puzzle fans worldwide. The premise was pretty simple: Guide a blob of Mercury through obstacles—and ultimately to a checkpoint—by tilting the environment. The simplicity ended after a few levels, as trickier challenges arose, like hazards splitting the Mercury into smaller pieces (which often plays into completing the level itself) or, as would happen time and time again, plummeting to your element-spilling death.

Now UTV Ignition Games is set to publish a variety of updates to the Mercury formula, and I got a chance to get my hands on Mercury Hg for PlayStation Network. Hg essentially does what the original PSP title wanted to all along: It employs motion controls—in this case the PlayStation 3's Sixaxis controller—to allow the player to move the level by tilting the controller. It's a little Marble Madness, a little Super Monkey Ball, and, so far, a lot of addictive fun.

Mercury Hg adds an almost entirely fresh set of levels, 60 new in total, and it isn't long before they start to get tricky. Levels with walls ease you into the formula, as you tilt your Mercury through tight passageways, leading it to small stations that change its color. This is a key component to victory, as a lot of the goals aren't accessible unless you've turned the blob a certain hue. As the difficulty ups, this can even involve splitting the blob, changing them both different colors down different paths, and combining them again to advance with a new blended color.

I started to feel the Monkey Ball magic when the levels became more fast and furious. While time plays into your final score, speed isn't crucial to victory. Still, it's all too tempting to blaze down devilishly thin platforms, trying (usually in vain) to hook a hard left or right, hit a bumpy ramp and glide over an imposing crevice to the checkpoint beyond. It's a delicate balancing act that creates a near constant war between maintaining composure and nurturing that Tasmanian Devil urge to reach the end as quickly as possible.

All of the stages come with full online leaderboard support, adding the potential for a dangerous obsession with beating friends' scores. There's also another nice and unusual touch: You can set your own custom music to play during the game, and the background will bob along with whatever beat emerges. With impressive liquid physics, a variety of extremely challenging levels (seriously, even the Ignition folks were having trouble with some of them), and the promise of a couple fairly priced DLC level packs down the line, Mercury Hg is looking like a solid bet for puzzle fans.

Mercury Hg ($4.99) is due out in September on Xbox Live Arcade (sans motion control) and PlayStation Network.