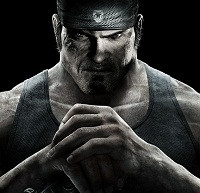 Friendship is often not handled well in games.  It's rare to find a game where characters actually act like friends--oh, they'll certainly have friendly (and not-so-friendly) rivalries and will oftentimes have each others' backs in tough situations.  But more often than not, the "friend" character in video games is a faceless, throwaway NPC who's quickly replaced by other, more interesting people for the hero or heroine to meet and develop relationships with.

The idea of friendship is pretty much nonexistent in co-op shooters--you're literally Guy #1 and Guy #2, making a mad dash to the finish line and seeing who can rack up more headshots.  The characters don't talk to each other, and nothing changes whether it's one person or two staring down an angry horde of enemies.

And then came Gears of War in 2006, and suddenly we had a friend.  Not just a comrade-in-arms, not just another gun next to you, but somebody who you actually cared about.  Dom congratulated the main character on particularly impressive feats, he ribbed him and brought up old, embarassing moments.  If you were playing on co-op, like I was with one of my friends, you were doing the exact same thing as the characters on-screen.  It felt natural and it made sense--in a game where you were chainsawing giant mole-bug men to death.

With the way Epic Games has built up the game's world over the course of the series, this emphasis on friendship and feelings of brotherhood drives the story and overall tone for Gears of War 3, the end of the series.  Don't be fooled by the gritty, gun-brandishing space marines on the cover--this title delivers in the story department, penned by military sci-fi favorite Karen Traviss, who's also responsible for building up much of the game's lore and extended universe.  This journey hits every note--it's funny, it's relentlessly exciting, and it makes you do that thing where you scrunch your mouth up and avert your eyes because you're all man and refrigerator-sized space marines don't cry.

But even if story isn't your thing and you just like to blow stuff up, Gears 3 more than delivers in the gameplay department.  At first, they all seem like minor adjustments, like how you pick up weapons and ammo, or whether to execute a downed opponent or pick them up to use as a shield.  However, once the initial disorientation wears off, you find that these controls are perfectly adjusted to prevent any screwups, giving you a full suite of options in any situation and making sure that if you mess up and get shot full of holes, it's your fault for making a bad decision and not the game's because of poor controls.

Adjustments made to weapons are equally as small--now the Hammerburst's zoom is aimed down the sight, Call of Duty-style, for greater precision, and new weapons like the Retro Lancer and the Digger allow for a vast amount of variety, strategy and heavily personalized playstyles.  There is no one "right" way to play in the game's huge assortment of modes, from standard Deathmatch to teams-of-two Wingman to my favorite, the five-against-the-world Horde Mode, where up to five players can work together to fend off fifty waves of enemies that grow stronger as you get farther.  In an added twist, you can earn money during rounds of Horde that you can use to fortify your position and buy newer, stronger weapons.  If you like playing as the bad guys, the new Beast Mode lets you play as the ravenous Locust Horde, tearing down fortifications and fighting dirty to get to the juicy humans inside.

In this amazingly complete package, you get what are probably some of the best visuals in video games today.  Gears, and shooters in general, are often criticized for their muted, washed-out palettes.  In a defiant response to this, Gears of War 3 provides you with some of the most beautiful digitized scenery around, which will get completely torn to shreds during the course of a standard in-game gunfight.  The marble hallways of five-star hotels, picturesque beaches, and the eye of a very, very large hurricane are just a few of the unique backdrops that show off the game's attention to detail and excellent use of lighting as a dramatic tool.

Even with all this fine-tuning and graphical showmanship, the last chapter of Gears of War has gone out of its way to make sure everybody can enjoy it.  The game's story can be experienced in up to four-player co-op, and I've always felt that Gears' closer-to-real idea of hunkering down during gunfights is more intuitive and easily understood by people new to the genre, making it a perfect entry point for people trying to get friends who don't play shooters to game with them.  Heavy emphasis on actual cooperation (and not just shooting in the same direction) keeps everybody together, and helps newer gamers learn the ropes while feeling like they've actually contributed something to a session.

With all this glowing praise, I do have a few minor, honest complaints.  I played through the game on Hardcore for my initial playthrough and beat it like it owed me money... and I'm not even that good at shooters.  I'm guessing it might be part of that effort to let everybody enjoy the game, but I've always liked it when a game puts up more than a little fight.  Boss fights often devolve into just leaping around and waiting for an opening to shoot one weak spot, becoming exercises in frustration and patience.

So to you, Gears fans and shooter fans, this is the title you've been waiting for.  More importantly, for those of you who don't play shooters, this might be the one to change your mind.  Gears of War 3 does everything right for fans of the genre, and is so well-made that missing it would be a disservice even for people who aren't.

What are your thoughts?  Let's keep this spoiler-free, so let's just talk about multiplayer or general things about the story.  My Crowning Moment of Awesome came after somebody on the other team blew away the second-to-last member on our team with a Sawed-Off.  I bayonet charged him out of desperation (stupid, I know) and he nailed his active reload, then took aim at me--I was just a millisecond faster.  I spent too long celebrating, though, as some guy across the level punished me with the One Shot.  Any of you have any multiplayer war stories, or thoughts about the game in general?