Check the magazines' over 30 years history! 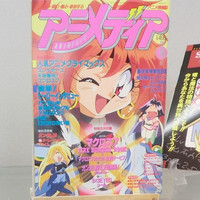 Another great feature in Machi Asobi Vol. 7 this year was an exhibition of the two oldest major Japanese anime magazines, Tokuma Shoten's Animage and Gakken's Animedia. Animage started its publishing in May 1978 and Animedia in June 1981. The purpose of the exhibition was to set up the complete collection of the magazines by donation. Though the mission was not completed by the final day of the festival, still the exhibition was amazing enough. Can you name all anime in the photos? Let's try!

The appendices (Furoku) for the both magazines