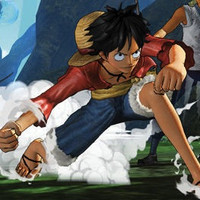 Yesterday at Jump Festa '12, although it was not listed in the official guidebook as playable, we did indeed get to put Luffy through some paces in One Piece Kaizoku Musou. It turns out that the video from the other day was the first part of the demo version we got our hands on.

From what I was told, it sounds like that level is the first one in the game, fighting a mob of Marines. There are tutorial 'missions' that teach you how to use Luffy's basic combos going beyond simple punches and kicks. Also, if you have a full power bar you can use his Elephant Gun move, which in terms of the area of attack pretty much has the effect of throwing a grenade.

Eventually a Pacifista shows up (this is where the video from the other day cuts off) and part-way through that fight, Luffy goes into Gear 2, which changes the combos you can use. It seemed like the demo version we were playing probably had the difficulty adjusted to allow most players to survive the full few minutes, because even though I got tossed around quite a bit I didn't die. Basically, it's a button masher, but like many button mashers, it's beneficial to strategize a bit about what combos you use so you can attack from above or more quickly, etc., as the situation demands.

After my demo ended, I talked a bit to one of the people on hand at Jump Festa—actually, they radioed out for someone with more knowledge of the game to come address my questions. Most details are under wraps since the game is still in development, but I did learn that although the game starts with this Marine arena-style battle, there will be flashback levels covering earlier parts of the story, like Luffy's fight with Buggy.

Another thing that really piqued my interest was seeing a sign that mentioned "1~2 players." When I asked about it, though, they only commented that co-op was possible, specifically stating they could not say whether that would be online or local. I couldn't get them to give me any info about what other character(s) would be playable besides Luffy, either, but it looks like that will be up soon on the official site.

Even though it was a very quick surface level demo of the game, smacking around Marines with Luffy's stretchy arms and legs was pretty fun. Fans of the series will no doubt appreciate One Piece Kaizoku Musou, and Luffy's abilities seem suited to the 'Musou'-type hack 'n slash (gum 'n gum?) formula.

VIDEO: It's All-Out War in the Second "One Piece: Pirate Warriors" Ad