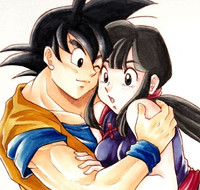 Fanart Friday returns, emptying the now-discounted shelves of Valentine's Day candy. Last week we wrapped up our three-week RPG theme, but much like how earlier this week Scott took a look at anime-themed fan Valentines and Patrick checked out a lot of weird chocolate, this week we're going to be focusing on couples--the barfier, the better. Let's get this show on the road, but mind your step--there be spoilers here! 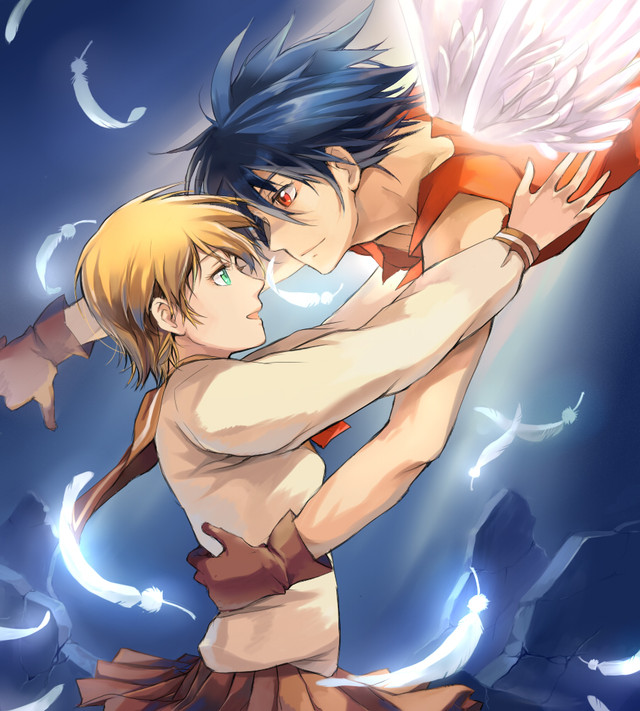 It was quite the rollercoaster, but Hitomi and Van coming together at the end of The Vision of Escaflowne was satisfying, even if it was kind of a bittersweet ending. 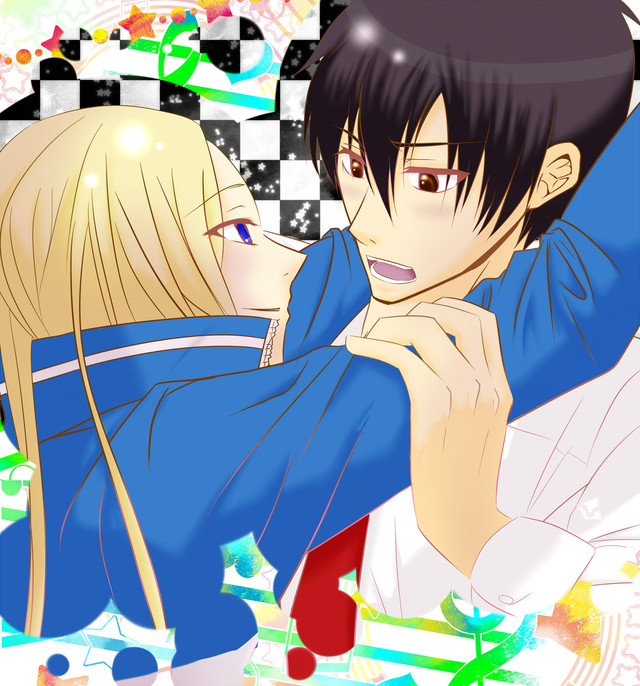 You have no idea how disappointed I was that I couldn't find a good "Princess Carry" pic from Arakawa Under the Bridge. Kou and Nino are definitely the weirdest couple on this list--which probably makes them the most realistic, too. 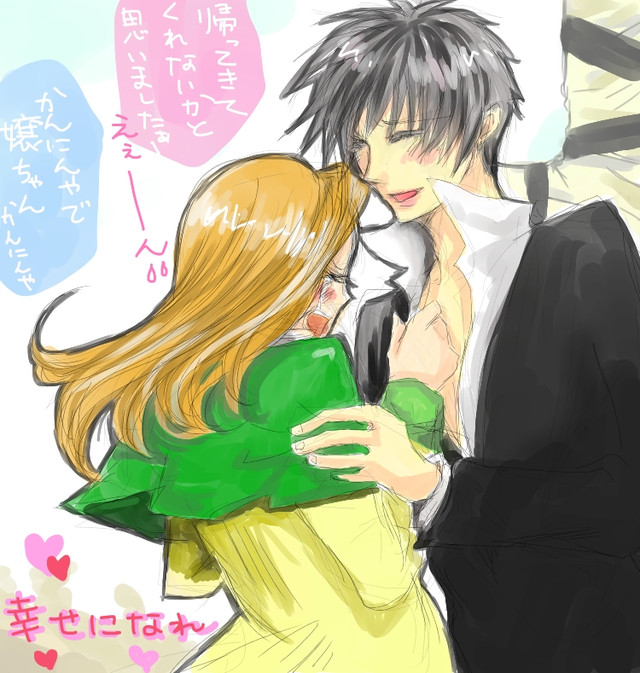 Wolfwood and Milly were a very sweet and unexpected couple that made Trigun a little lighter, especially in its darkest hours. After reading all of the manga, it's kind of hard for me to go back to the anime, though... 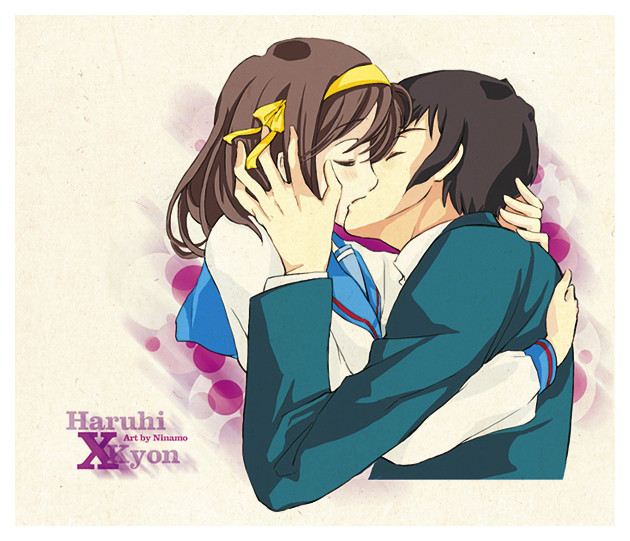 Whoa there, you two! Then again, you knew this was always happening behind the scenes. Despite his boring exterior, Kyon is a total mac-daddy who's driven wild by ponytails. 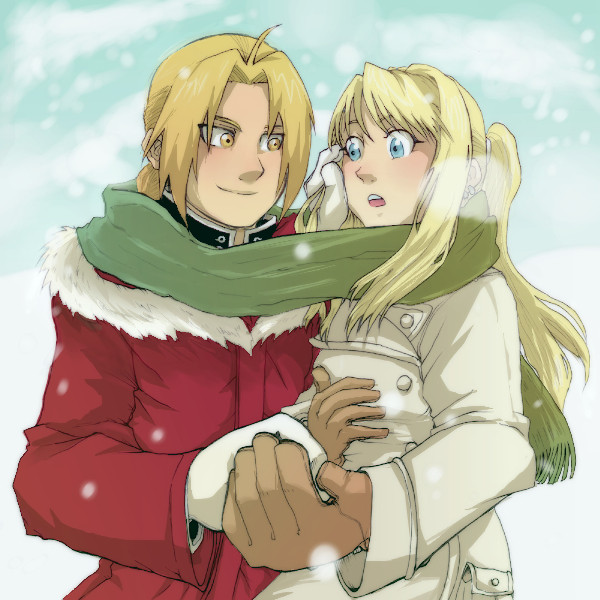 There were a lot of things I liked about Fullmetal Alchemist's real ending, but Ed's awkward and hilarious confession to Winry was easily one of the best moments.

These two are just nuts. Their exchanges at the start of Gundam W are nothing short of baffling. Heero rips up an invitation, threatens to kill Relena multiple times, and she's absolutely smitten with him. YOU PEOPLE ARE CRAZY 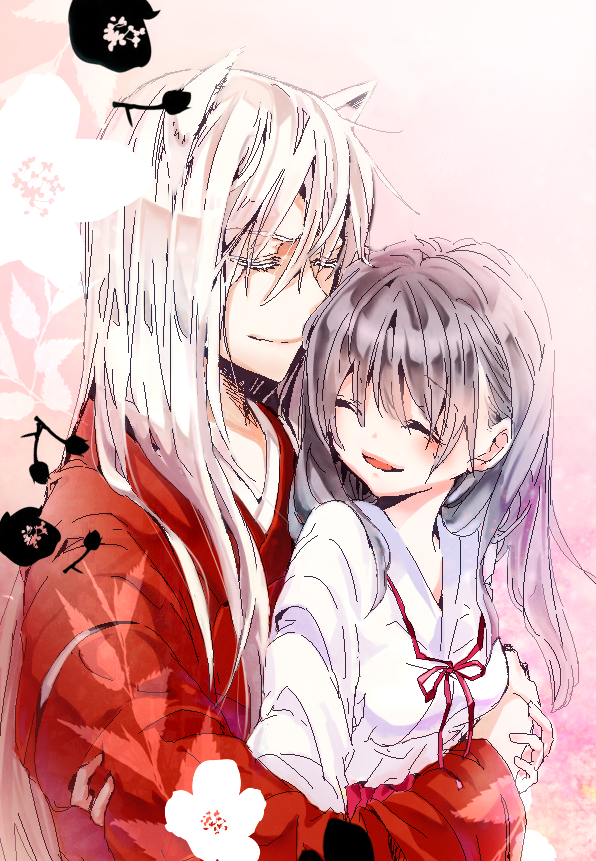 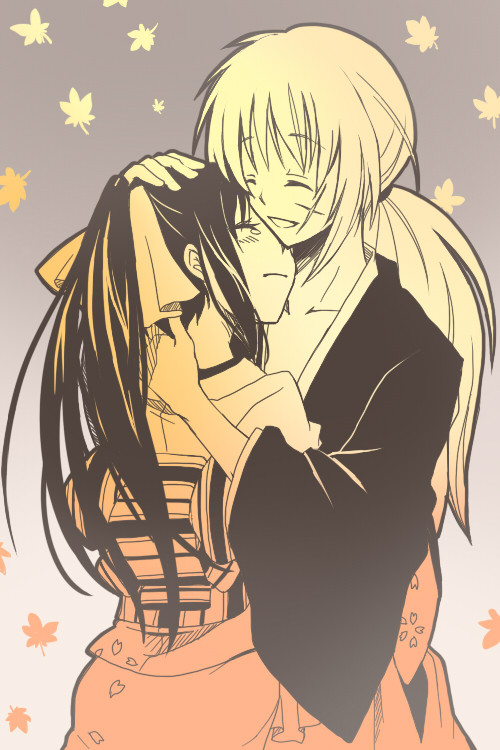 Was there ever any doubt that this is the way Rurouni Kenshin would end? 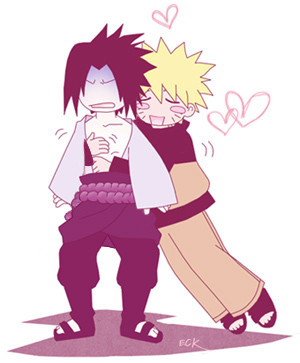 So both of these guys have ladies after them. More in Sasuke's case than in Naruto's, to be sure, and yet they still spend every waking moment thinking about each other. Hey, I'm not gonna judge, I just wish they were more honest with themselves. 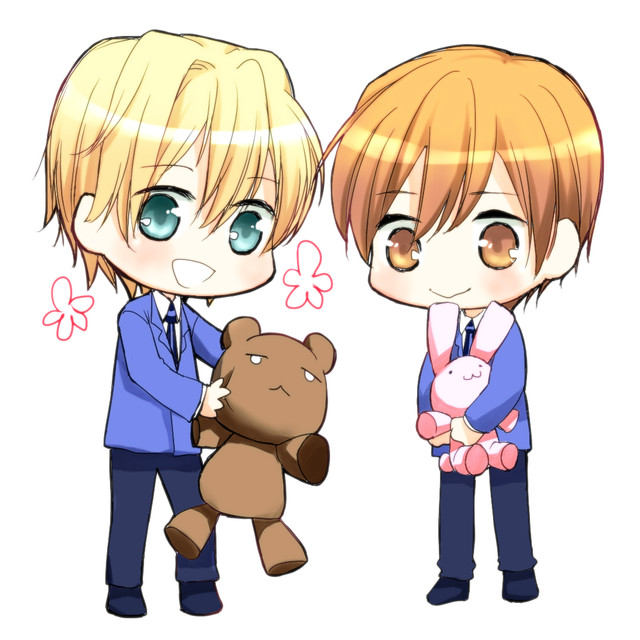 There is no other way Host Club could have turned out for me--I loved every single cast member, but Tamaki liked Haruhi from the beginning. He worked his ass off to get her to like the crazy blonde guy who found poor people absolutely fascinating. He earned that. 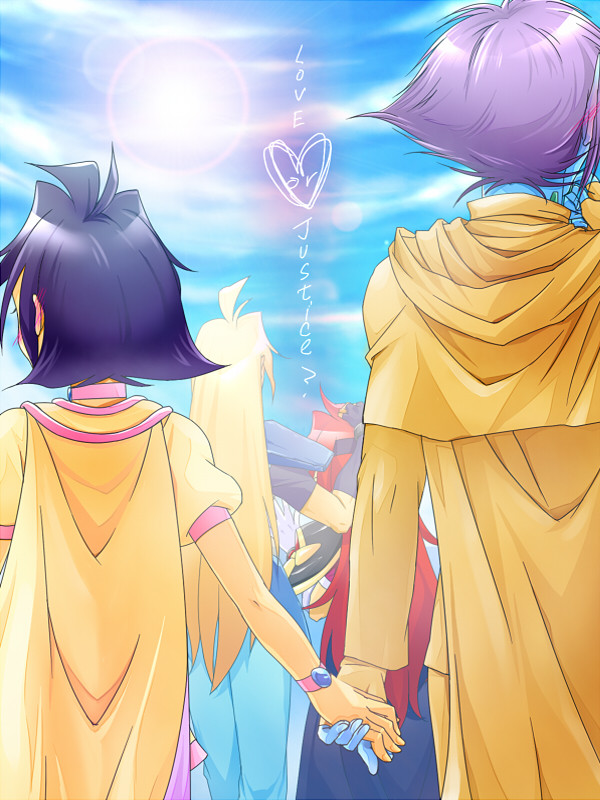 Slayers handled its sorta-romances well. While Zelgadis and Amelia were a couple that were toyed with throughout all four (five?) series, only Lina and Gourry really got any closure, and that was at the end of Slayers NEXT. 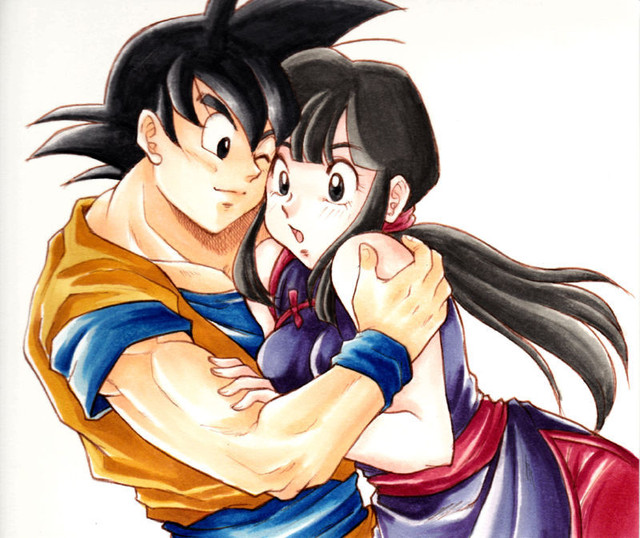 Y'know, it's funny--before Goku became the model figure for spousal neglect, he and Chichi seemed like a pretty cool couple. Two dumb hicks who thought a good time was going out and busting some heads at a tournament? They're perfect for each other! 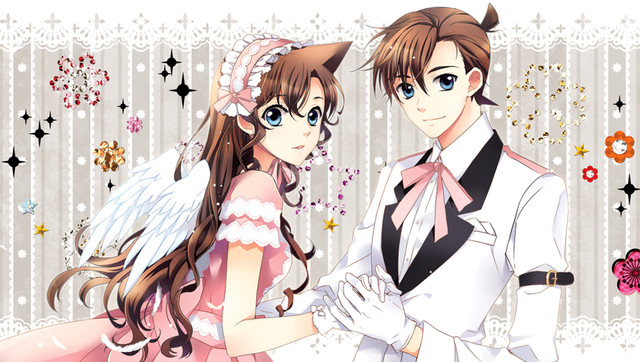 Any urge I have to yell "TELL HER THE TRUTH" while watching Detective Conan is quickly stifled as I see Ran brutalizing the current case's villain. You see, if Conan opened up and said who he really was, well... things would get messy. 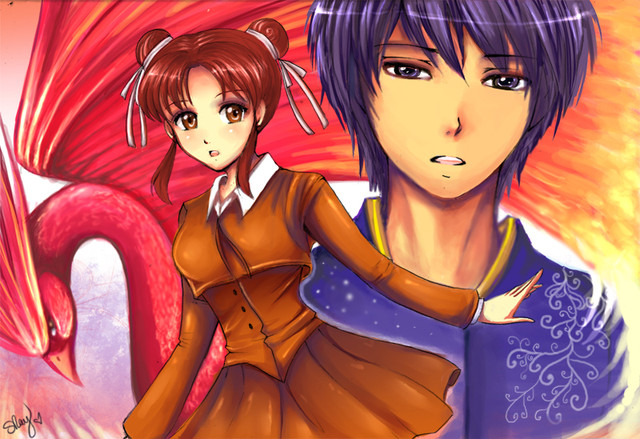 As we've mentioned before, I have a real weird relationship with Fushigi Yugi. I absolutely, positively can't stand Tamahome or Miaka... but I cared enough to stick around until the end and watch the whole thing. 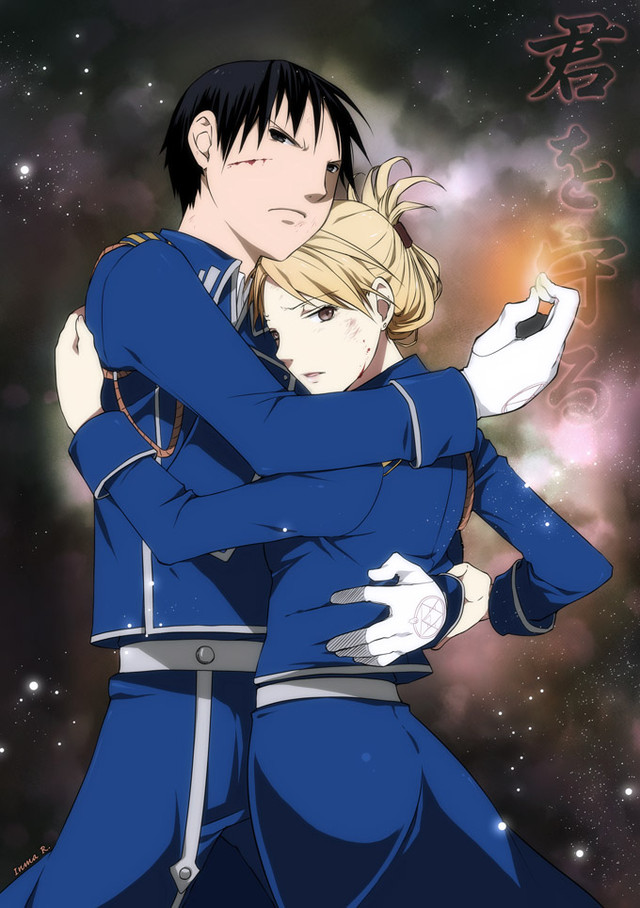 Y'know what these two are? Professionals. They have work to do. They have a country (and a world) to save. They can make kissyface after they light the enemy on fire and pump him full of bullets. Or after the series, because we never really got any real closure at the end of Fullmetal Alchemist. 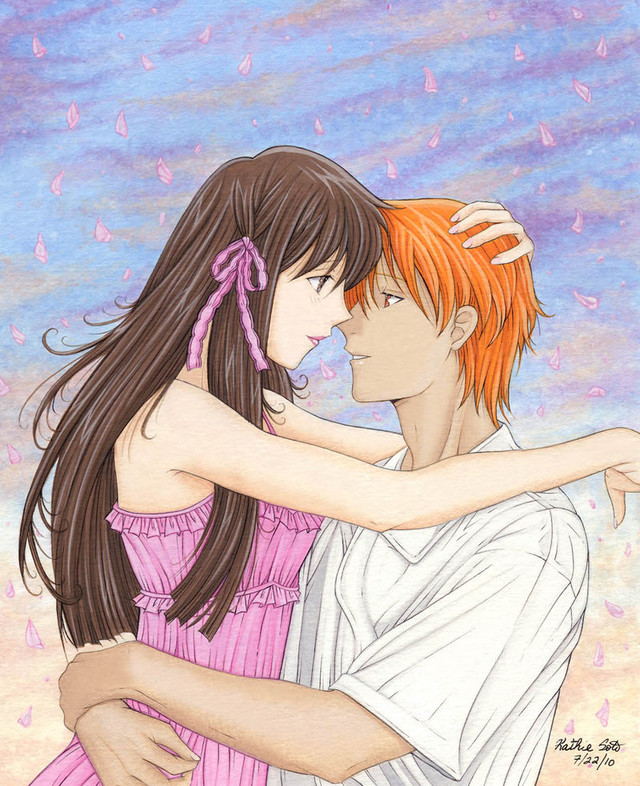 I have yet to actually finish Fruits Basket, but a friend of mine has and says it was worth it. I'll have to get around to that at some point, because I really liked what I read. 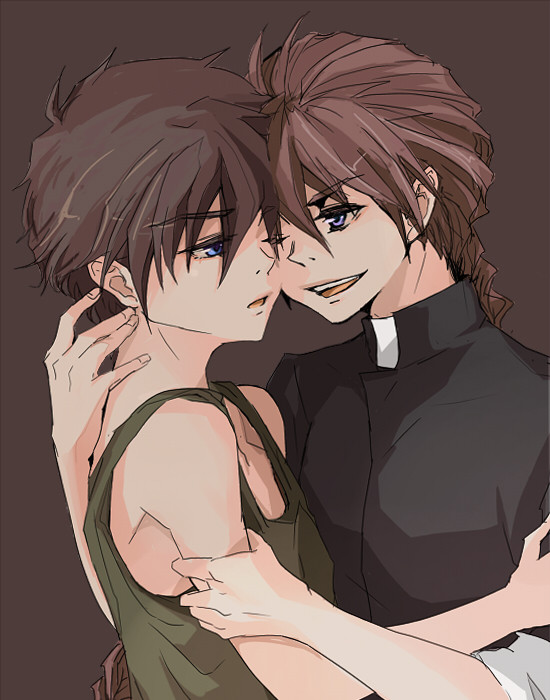 If I had a nickel for every yaoi fangirl who was expecting this not-even-close-to-canon "couple," I'd be a very, very rich man. C'mon, ladies, you know that the only bromance going on was between Zechs and Treize. 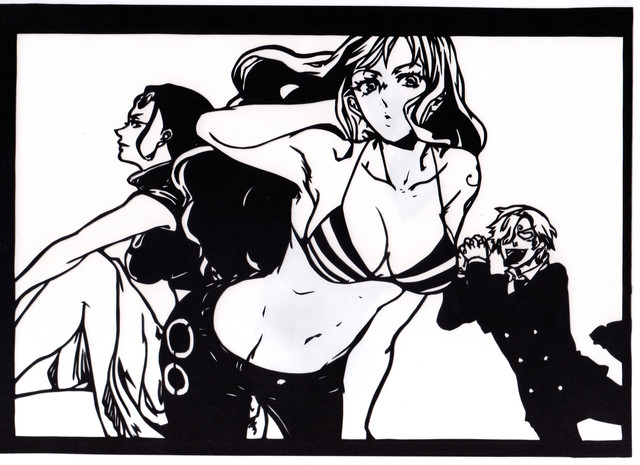 But y'know what the single greatest romance of all time is? Sanji's overwhelming love for every female being on the planet. It's unstoppable.

So after getting in touch with my feelings and baring my romantic side to the internet for the entire week, I think it's time to get back to basics... blood and guts and badassery. Next week's Fanart Friday will be about rivalry, epic battles and all the stupid stuff guys wish could say to each other in a fight that isn't "hurfdurf, ow, my face."

But in the meantime, what did you think of this week's batch of fanart? Who are your favorite anime couples? Were there any big ones I missed? Let us know!