Schoolkids are everywhere in anime--this week, check out fanart of your favorites! 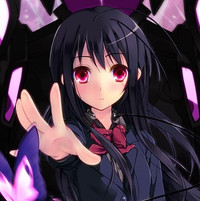 Fanart Friday returns, really hoping that one of the year's assignments is to build a volcano. Last week, we worked ourselves to exhaustion with fanart of our favorite masters and students, but this week it's just students--the literal kind of student that actually goes to school.

I find it kinda funny just how many characters in anime and manga still go to school, and how important school is as a setting across so many different series. So with that, let's get started! 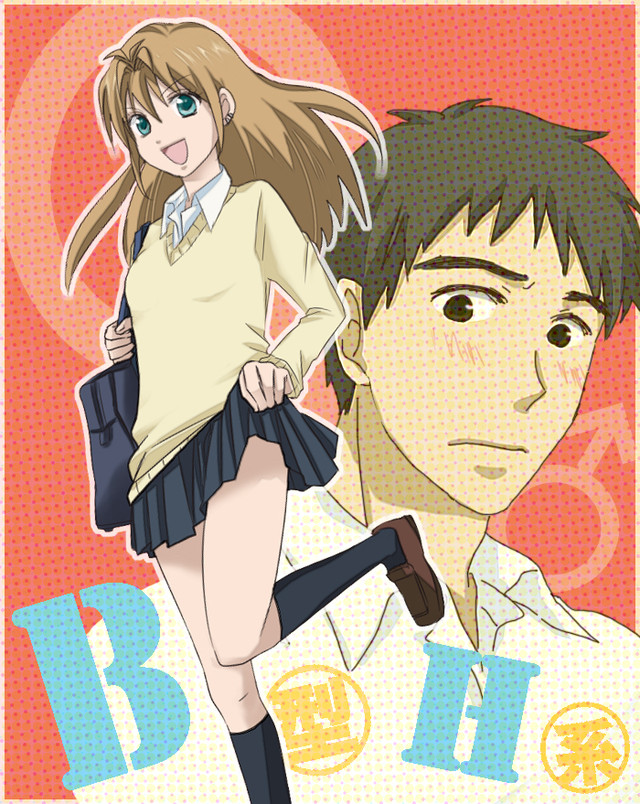 Of course our first piece has to be from B Gata H Kei: Yamada's First Time. Normally, I don't like series like this, but I appreciate how this show just gets right out in the open and declares itself a rowdy, awkward sex comedy, instead of trying to appear pure and that they're telling a serious story while every now and then dipping into the fanservice well. This show is solid gold. 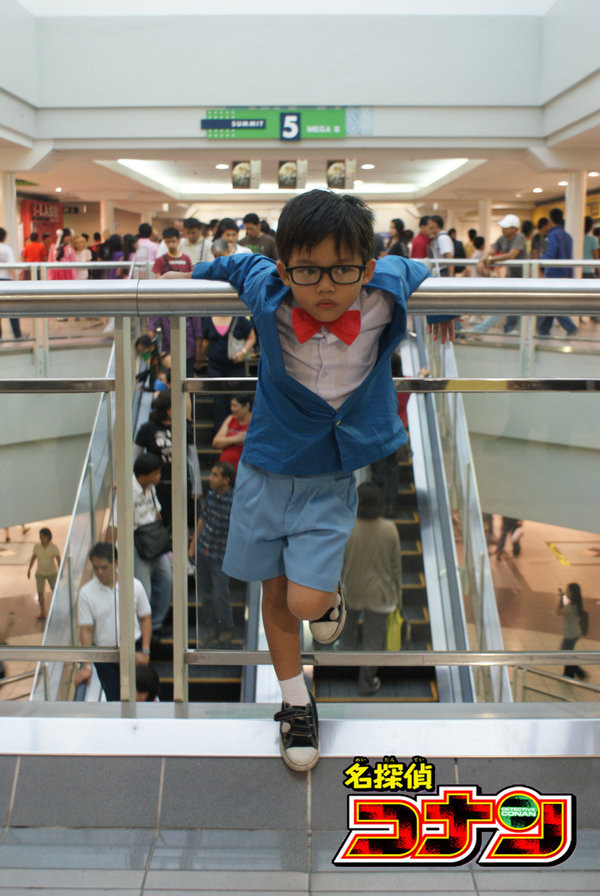 I always wonder what it's like for Conan/Shinichi, who's had to repeat a whole bunch of elementary school grades ever since he was turned into a kid. You'd think he would play the role of the genius kid and get bumped back up into high school or something. Yeah yeah, "Ran would be in danger"--NO SHE WOULDN'T, Ran brutalizes anyone who ever gets in her face. 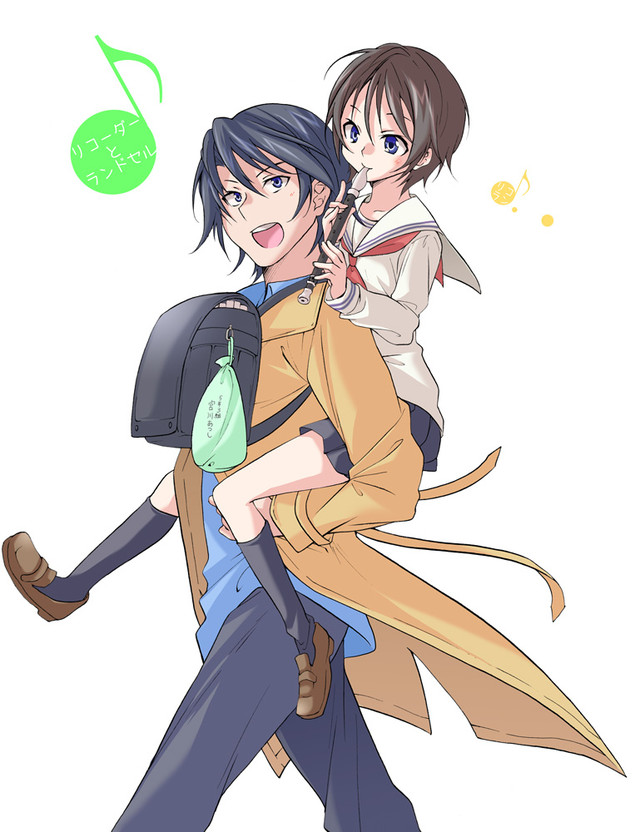 I know I mentioned this in the CR newsletter a couple months back, but the best recurring gag of Recorder & Randsell is that poor Atsushi is really just a little kid, but he keeps getting arrested because he's walking home with little girls (his classmates, or in this case his sister). 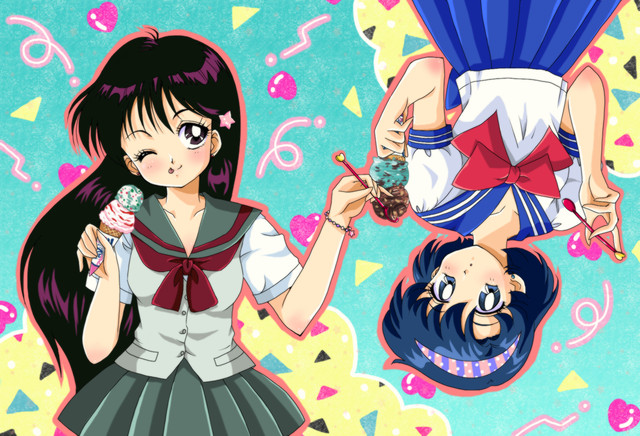 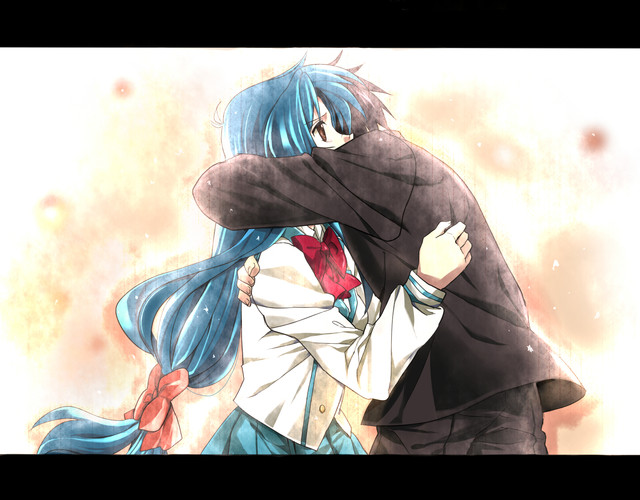 Don't trust him, Chidori! You know he's blown something up somewhere in the school, or shot somebody with rubber bullets, or booby-trapped the window to the girls' locker room! No place is safe in Full Metal Panic's Jindai High School! 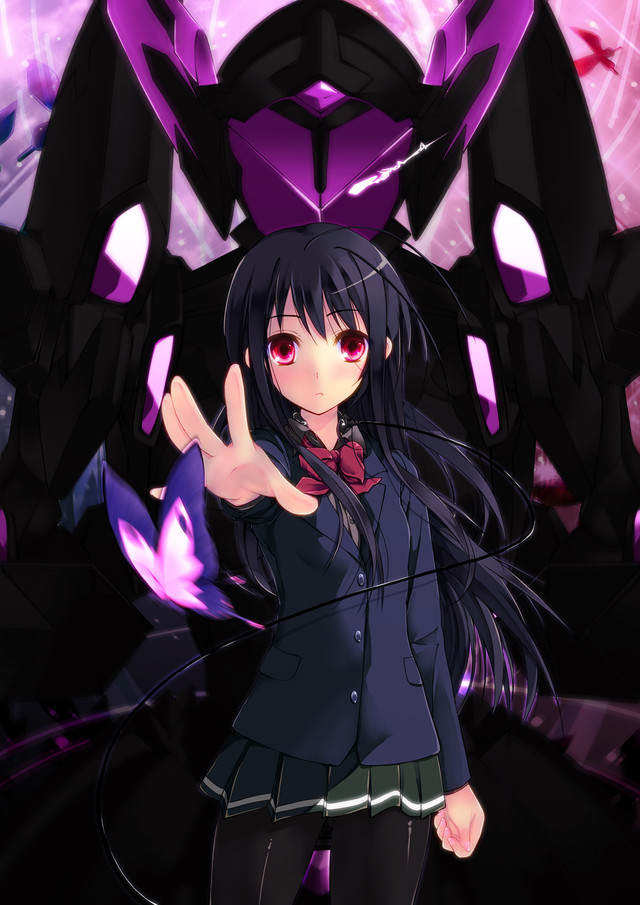 Y'know, it's amazing how Accel World's Kuroyukihime is able to stay on top of things at school and with student government when she's basically spending most of her day playing video games. Then again, we all know somebody like that. 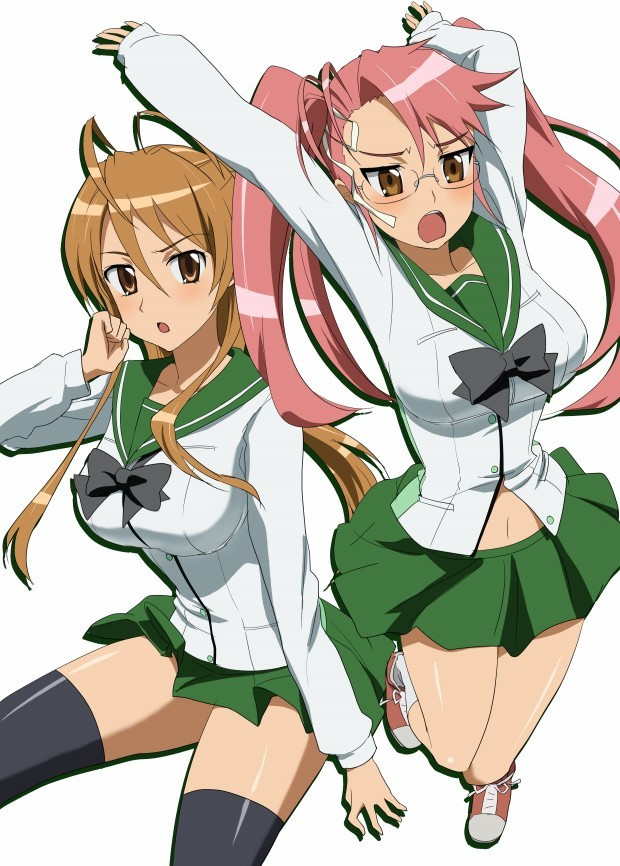 All right, so the main cast of Highschool of the Dead didn't spend much time at school--it was kinda overrun with the living dead--but it's funny how long they stayed in their school uniforms. You'd think they would follow Max Brooks' Zombie Survival Guide and wear form-fitting clothes that were easy to move around in. I know, tracksuits aren't sexy, but they're practical. 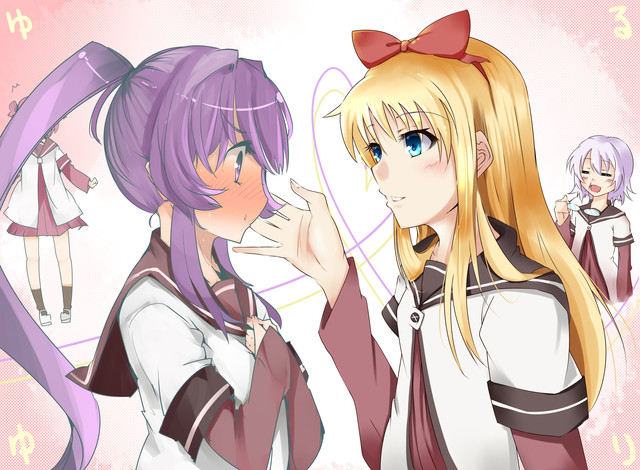 Okay, fans--I haven't seen a single episode of Yuruyuri, and all I know is that it's a comedy about girls founding an Amusement Club, which is probably the most redundant thing I've ever heard. If you founded a Numismatism Club, it would be for the purpose of amusement via collecting coins. So sound off in the comments on your favorite parts of Yuruyuri! 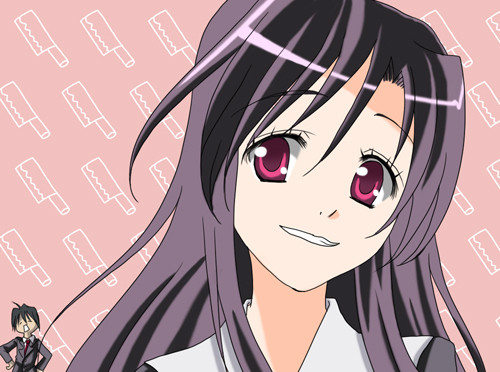 School Days taught us all a very important lesson: having a harem will get you in a lot of trouble. Yes, I know that's a massive understatement. 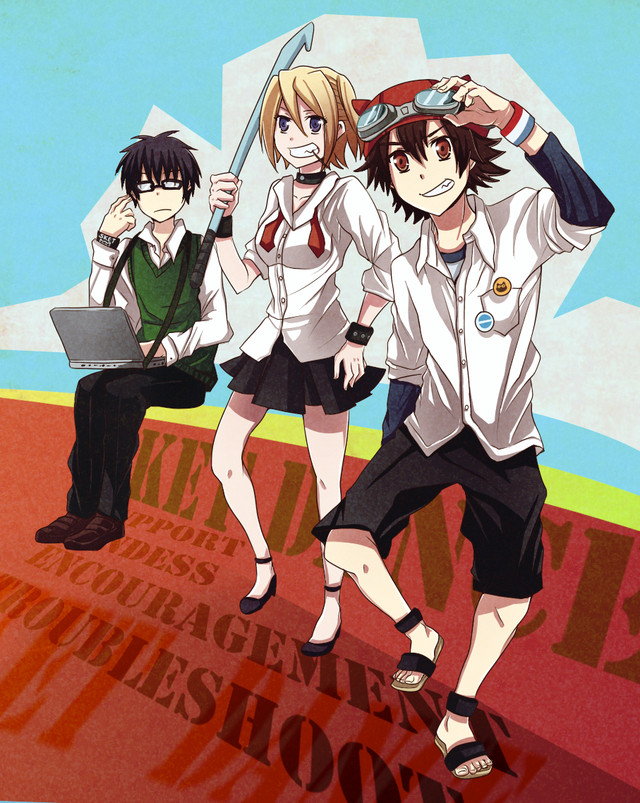 And if you're in trouble, who else do you call but the SKET-Dan? Sket Dance's team of problem-solvers are guaranteed to save the day! 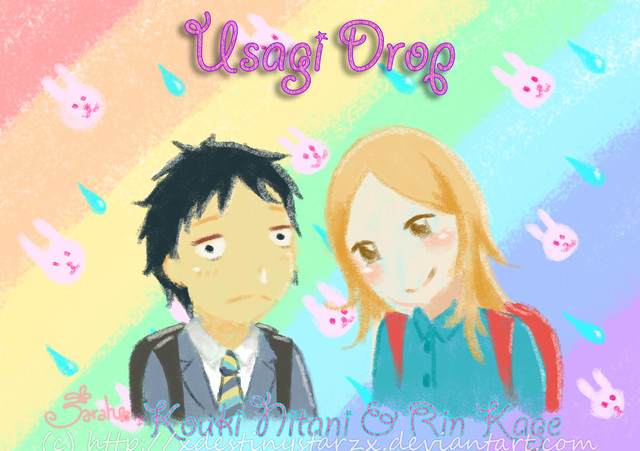 The premise of Usagi Drop is pretty heavy stuff, but it's still nice to see a series where kids are kids, not forced to fight or going through completely unrelatable problems. 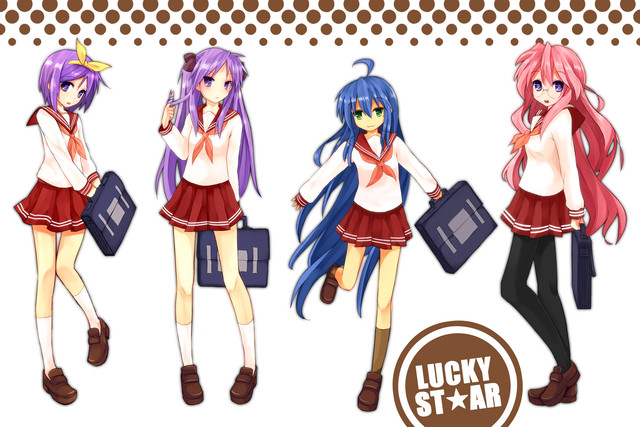 I suppose for a lot of you, when someone says "school series," the first thing that comes to mind is something like Lucky Star, light and fluffy and cute. That's cool. 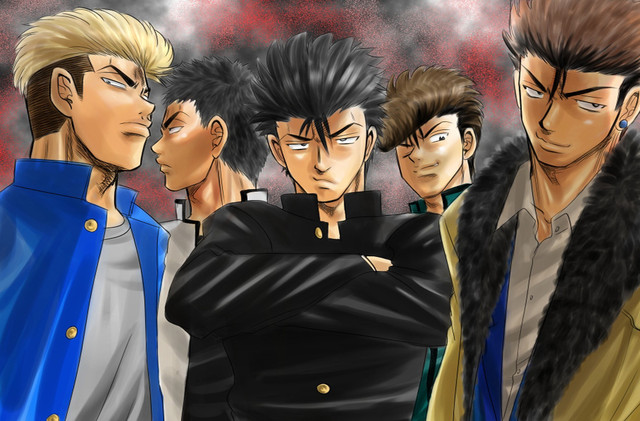 This is what I think of when I hear "school series." Boys becoming men, finding goals and learning that high school is just one small step on a very long road. Rokudenashi Blues is so, so good, and it's probably never coming to the States. 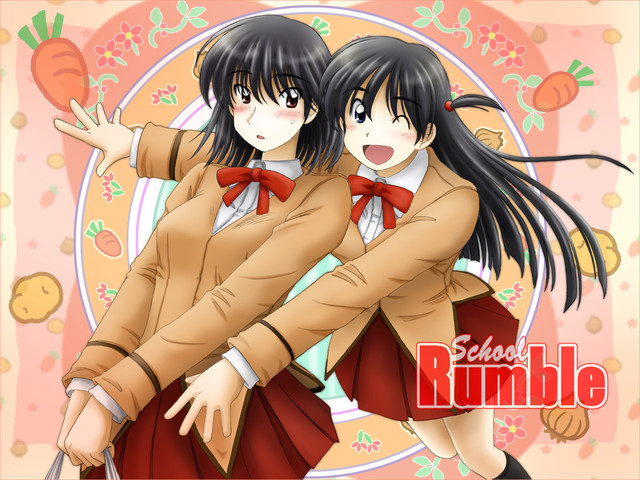 The lessons that school-based manga can teach aren't just the harsh, manly kind. School Rumble is equal parts harsh and manly, but it handles all of that in such a hilarious, over-the-top way. 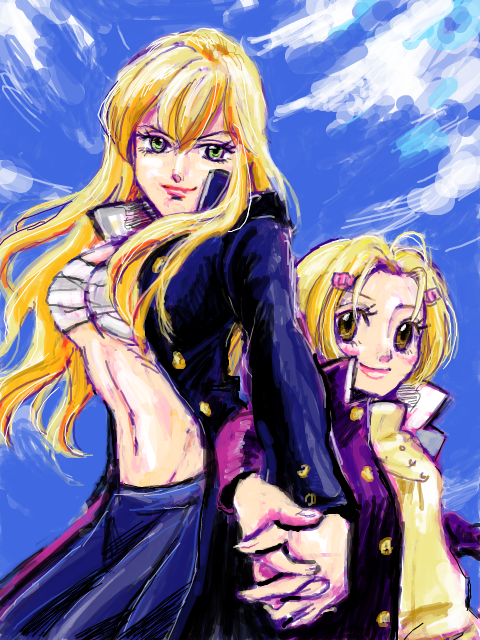 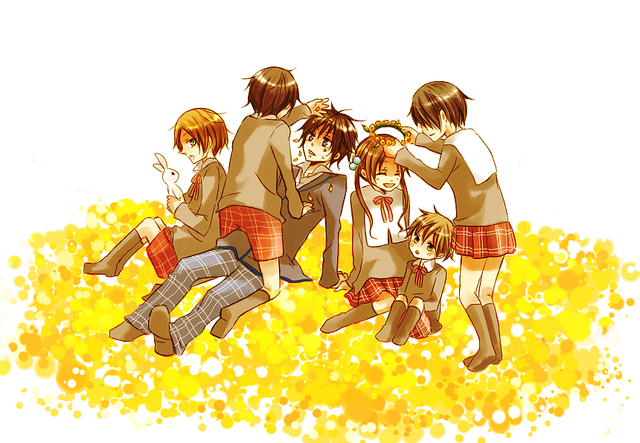 I remember Gakuen Alice being insanely popular a few years back, and that it's about a special school for people with powers (called "Alices.") So do the dudes get called Alices too? Or do they just go by "Al?"

Okay, so for everybody saying that The Hunger Games is a ripoff of Battle Royale, keep in mind that the "people, specifically kids, having to kill each other for a twisted crowd's entertainment" genre has been around for a long time. Still, Battle Royale was an amazing manga, and made for a pretty decent live-action movie as well. Strangely, I still haven't gotten around to reading the novel. 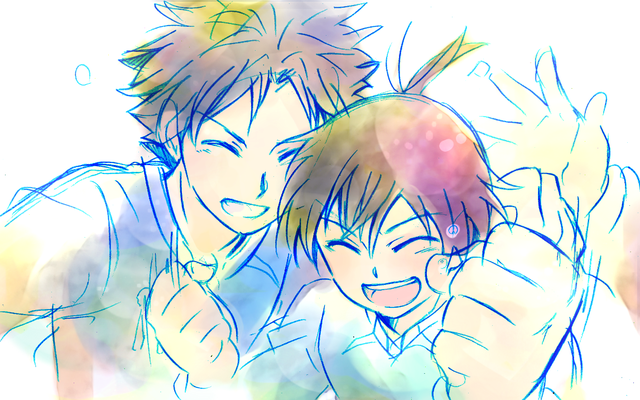 I almost completely overwhelmed this list with sports series--it's one of my favorite types of anime and manga, after all. On top of that, so many of them take place at school, but The Knight in the Area has been one of my more recent favorites, not to mention that soccer is a pretty awesome sport.

So I guess I have Azumanga Daioh to blame for the explosion of popularity in the "cute girls doing... stuff" genre. That's all right, since Azumanga was actually pretty good, and led to the insanely good Yotsuba&!. 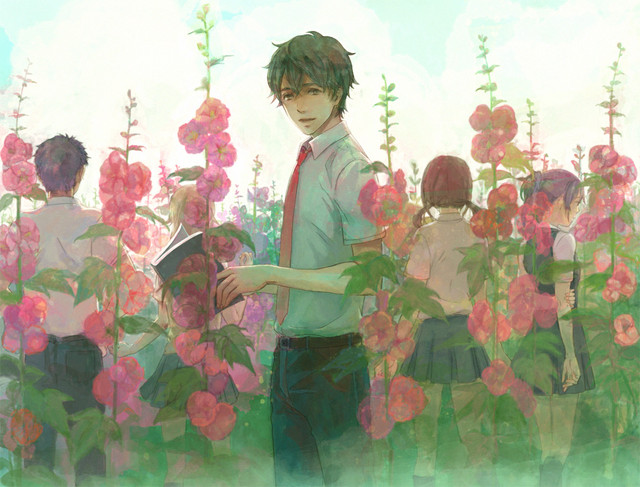 I've only watched the first episode of Tari Tari, but it was pretty good! Should I stick with it, or does it peter out later on?

A friend once recommended Toradora to me, but I didn't watch it until recently--he's the kind of person who likes just about anything. Much to my surprise, I liked it quite a bit--school series are kind of a hard sell in my case. 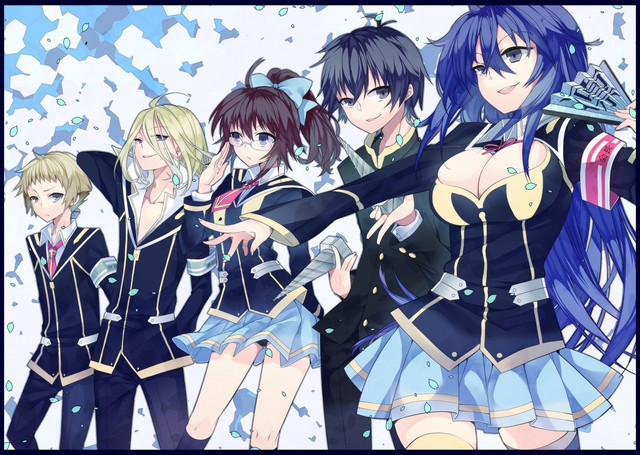 I dunno, I'd be fine with having a group like the SKET-Dan around in my school, but Medaka Box's terrifying student council is a little much for me. Plus, how does Medaka get away with that much cleavage?! 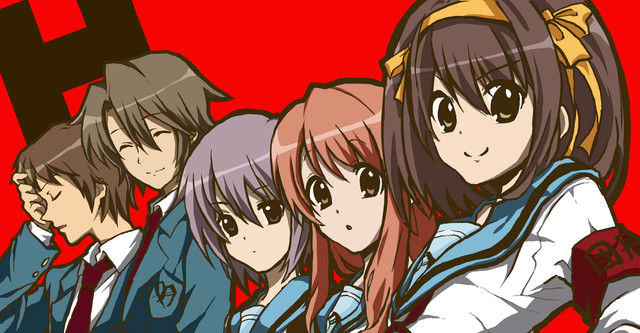 I dunno, I like how the second season of The Melancholy of Haruhi Suzumiya was a gigantic troll. The first season was initially aired out of order, and the series was all about subverting expectations, so finding all the little details spread throughout Endless Eight was totally worth it. 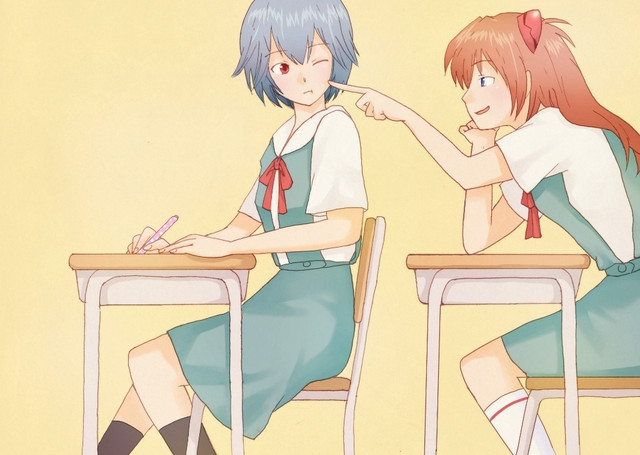 This is kinda nice to see, instead of Asuka unleashing her inner (and outer) bitch on poor old expressionless Rei.

And that's all for this week! For September, we're going to do something a little different and focus on a single series for each installment of Fanart Friday--next week will be all about everyone's favorite orange-clad ninja NARUTO!

Your art is always welcome here on Fanart Friday--don't mind the bitchy little girls in the comments who think all art has to be at a certain level to be shown off. Send me a PM with a link to your work, no matter your skill level or experience, and I'll find a way to work it into a future installment!

Who are some of your favorite schoolkids in anime and manga? I left games out this time, but I know there are plenty of students throughout all the RPGs and fighting games, so sound off with your favorites in the comments!

As always, thanks for checking out Fanart Friday, and I hope everybody has a great Labor Day Weekend!