FF:FF Edition brings a lot of f'in FF for this week's FF 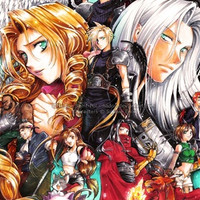 Fanart Friday returns, having spent a small fortune on belts, zippers, and hairspray. Last week, we gave up on giving up with the friends and foes of Naruto, but this week we're firing up our video game systems and getting ready for a marathon of Final Fantasy fanart! As many of you know, it's the 25th anniversary of Square's flagship RPG series (we already did a two-part retrospective--here's Part One and Part Two), so we'll take a look back at the whole series--all fourteen titles' worth--and see what kind of art fans have done to celebrate!

There are so many good Final Fantasy tracks that I couldn't choose just one--so you get this instead.

I'm being pretty straightforward on this--it's just gonna be artwork from main-series Final Fantasy titles, or titles that bear the Final Fantasy name. So no SaGa, no Chocobo's Dungeon, no Vagrant Story, no Mana, and no Kingdom Hearts. Besides, that just means I can do a separate KH-only installment later on down the road! Now, let's get started! 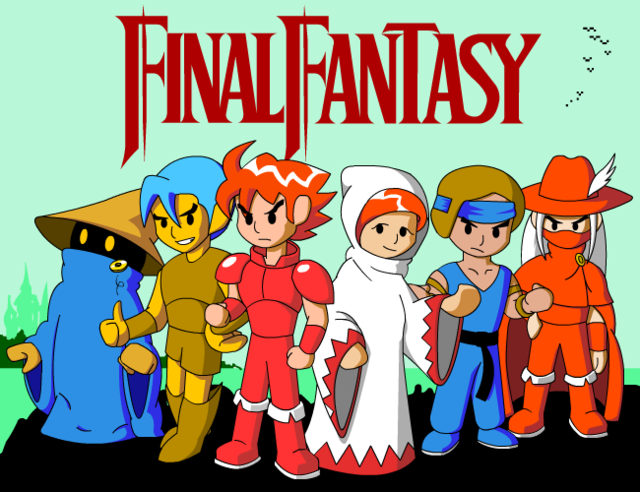 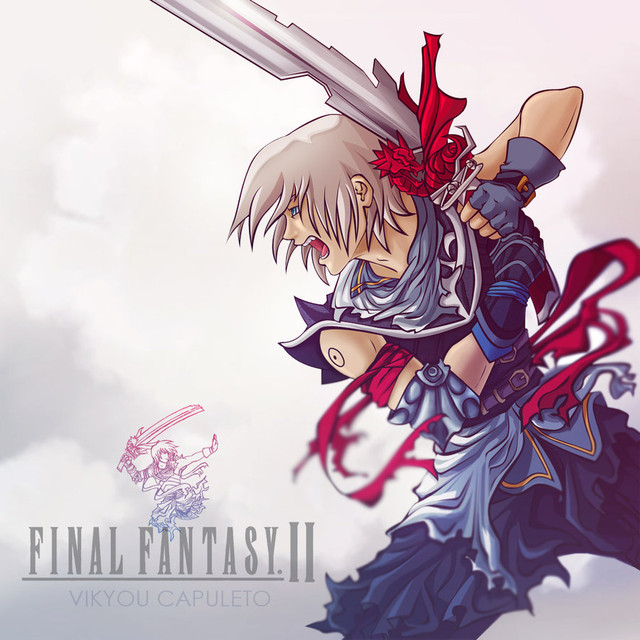 Actually, doing that set a pretty good precedent--we can just go through the series one-by-one! Now, I can honestly say I've only played part of Final Fantasy II, but it introduced plenty of the elements that became staples of the series, like Chocobos and "Cid."

Ahh, now we're getting into stuff that Kids These Daystm have actually played--Final Fantasy III hadn't appeared in the US at all until it got a DS remake. The remake changed some things--characters actually got names and personalities, instead of having you name them all, but the game still had plenty of freedom and customization in its Job System. 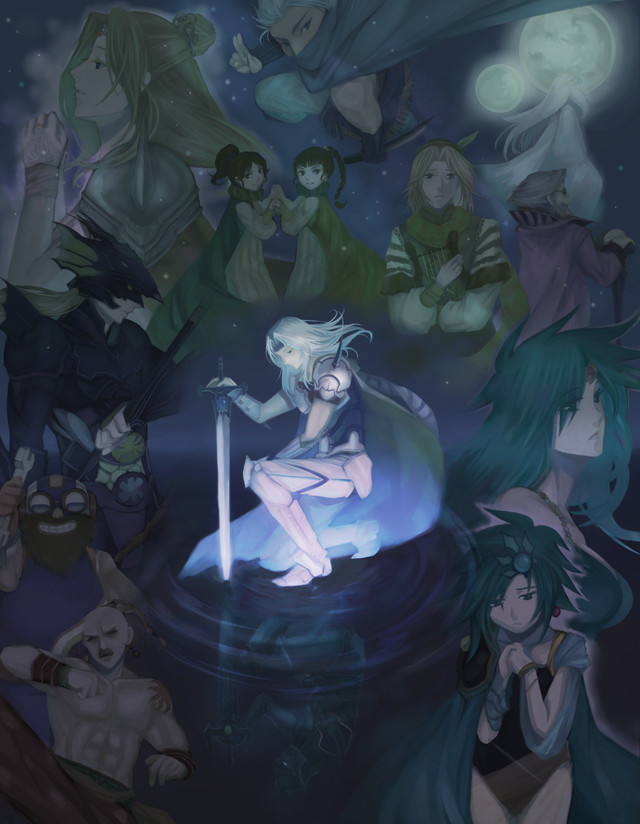 Final Fantasy IV is what really defined the series as a whole--pretty much every game since has followed this game's lead in terms of storytelling and setup. Honestly, I wish they kept with the actual fantasy aesthetic instead of the pseudo-sci-fi feel that it's been moving toward. 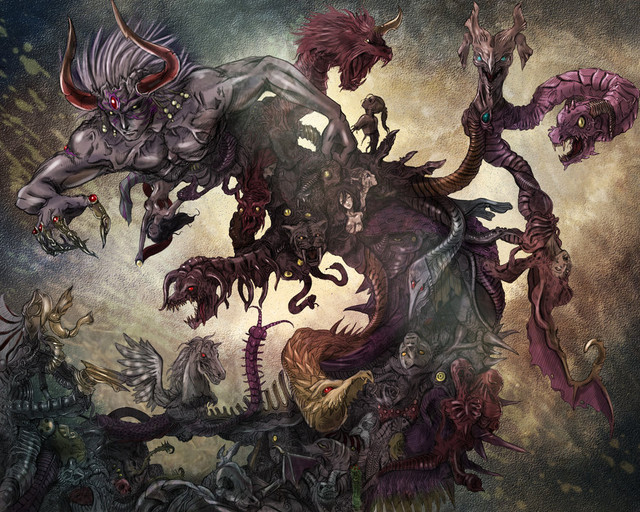 Yeah, Final Fantasy V is about a guy named Butz Bartz, but what do you remember most about the game? Personally, I remember getting curbstomped by Exdeath here, because he's not so much a "villain" as he is a "malevolent force of nature." 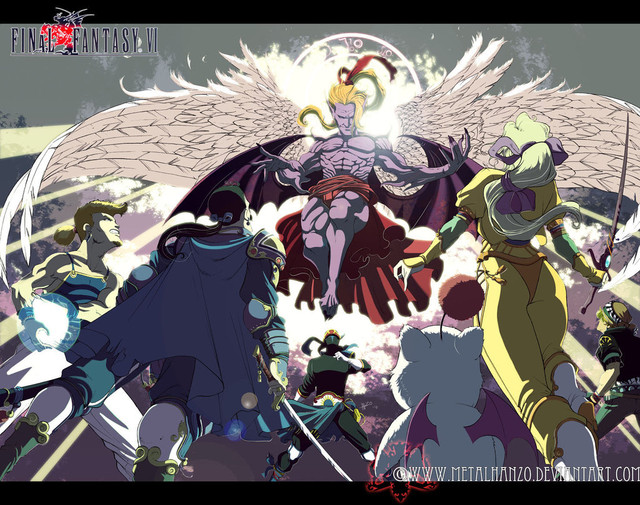 Holy crap! Along with having a totally badass name, HeavyMetalHanzo has really captured that combined sense of wonder, fear, and anticipation when you finally face off with Kefka at the end of Final Fantasy VI. I mean, a part of you is afraid of him, especially after what he just did to the entire world... but he's right here, and now you have a chance to pay him back for all the crap he put you through. 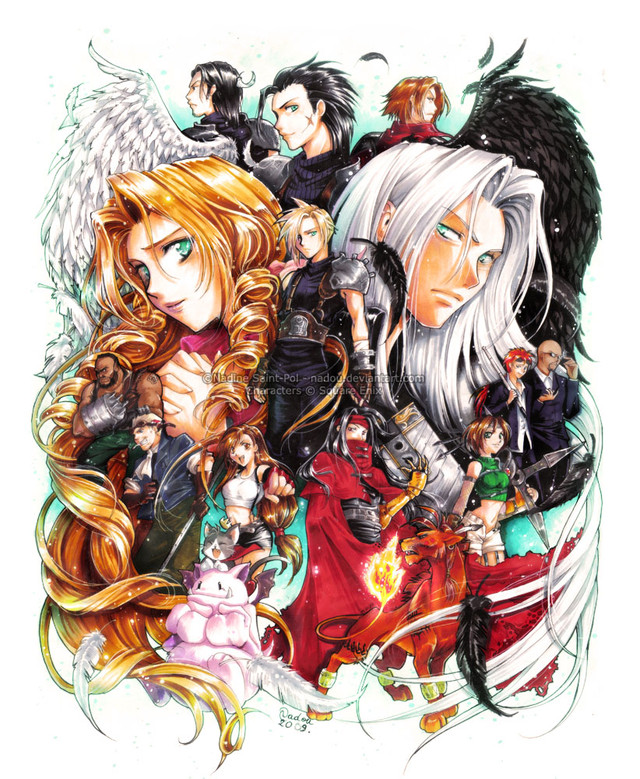 What a halfway point! I know a lot of you got your start with Final Fantasy VII, so it holds a special place in your hearts... but I'm still very adamant in believing it doesn't need a remake. There's still quite a bit of charm in those aged, blocky graphics--they lend themselves to much more imagination and stylistic interpretation you'd get with higher-end graphics--that way, there's no definitive way that the characters are "supposed to look." 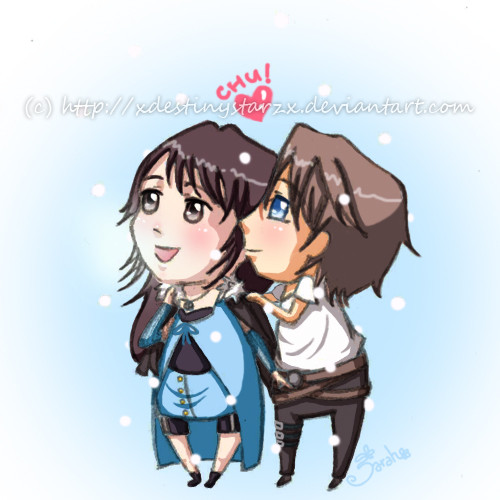 I really love Final Fantasy VIII, even with all its flaws. Squall is such a gigantic tool that his third-act change to a decent-enough guy comes as too little, too late. But damn, the game is fun to play! 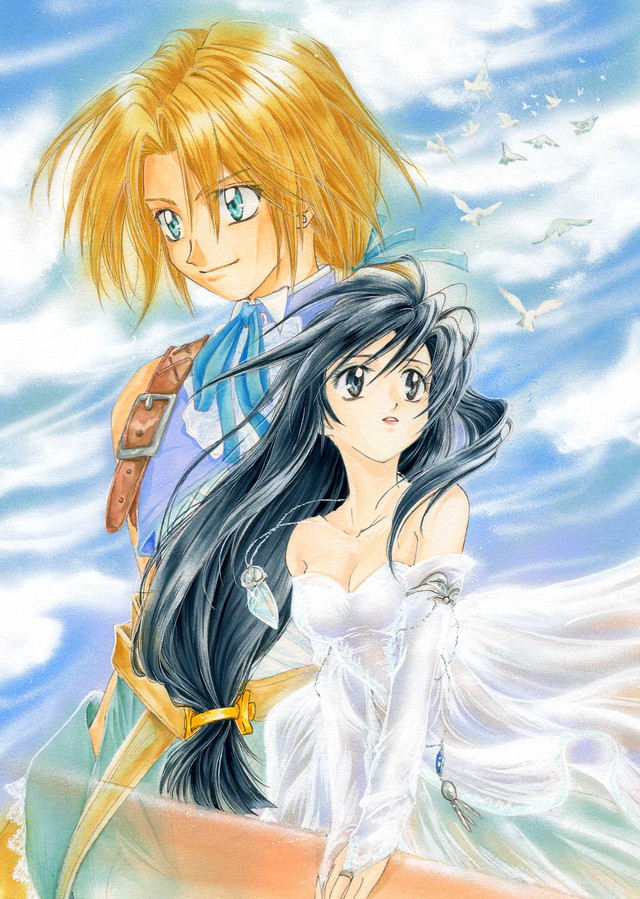 Final Fantasy IX was a nice return to form. Light and whimsical with just a hint of darkness underneath, it was a classic-feeling Final Fantasy with solid gameplay and great characters. 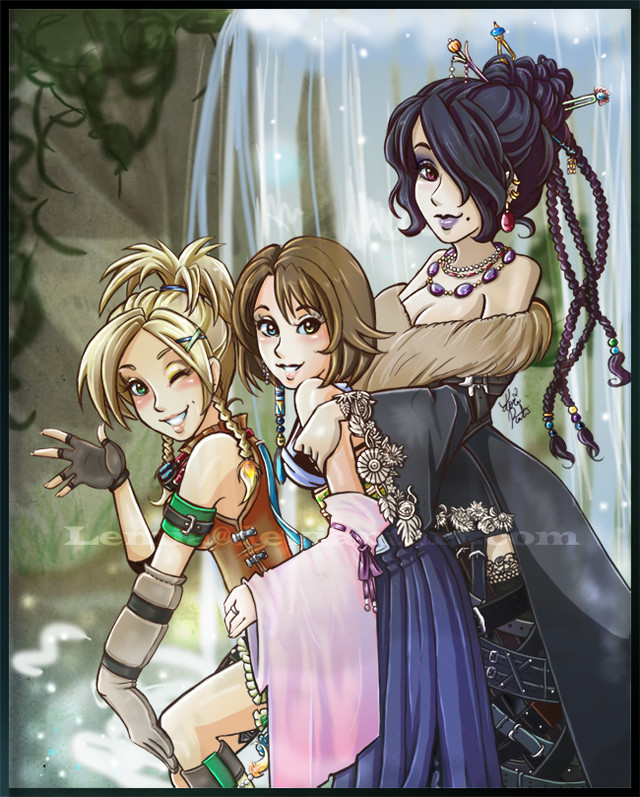 No Tidus? THANK GOD. For another generation, they all got their start with Final Fantasy X, which actually is getting an HD remaster soon. I hear rumors that they're importing Dead or Alive Xtreme 2's physics engine to power Lulu. Oh, that's not happening? It's totally made-up? Darn. 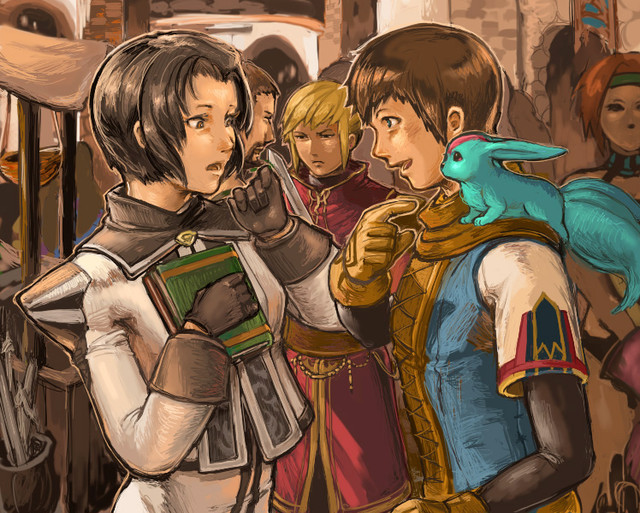 A lot of people didn't like Final Fantasy XI, probably because it forced them to actually socialize in-game and work with other people. Bad hermits! Role-playing games are meant to be played with friends! And a GM and dice, but that's a different matter entirely. 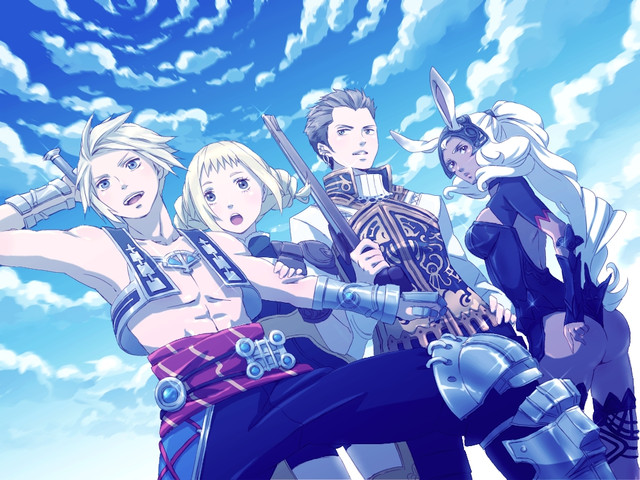 Final Fantasy XII had so much going for it when the story was about political intrigue! It also would've been a hell of a lot better if Yasumi Matsuno got to tell the story he wanted, about the redemption of grizzled soldier Basch instead of having to tell the story of whining upstart side character Vaan! Still, the game was excellently-designed, infuriating random item drops and all. 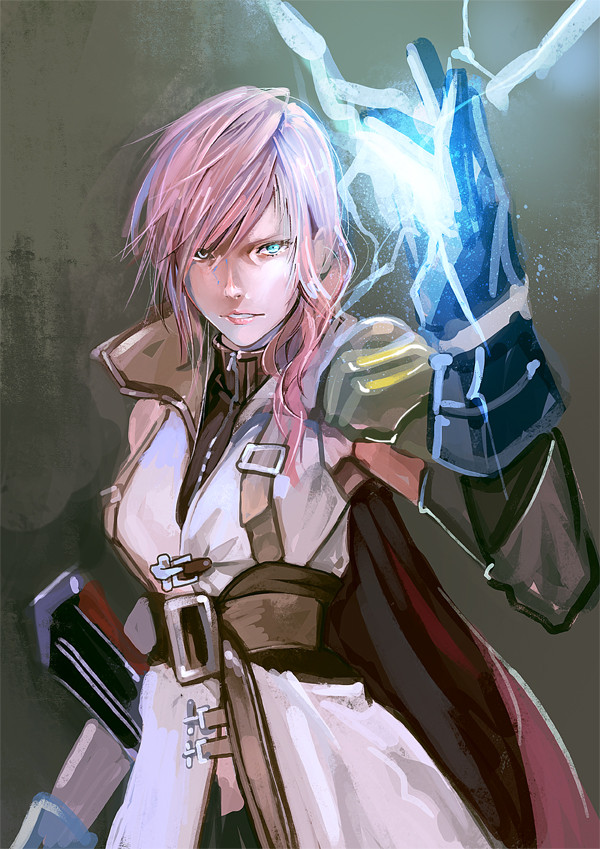 Lightning's here, and she's ready to kick some ass. I can understand why everybody hated Hope in Final Fantasy XIII with all his generic, hilariously-misplaced rage, but I really liked Lightning (tough mind-on-the-mission military heroine) and Snow (who was a pretty nice guy). 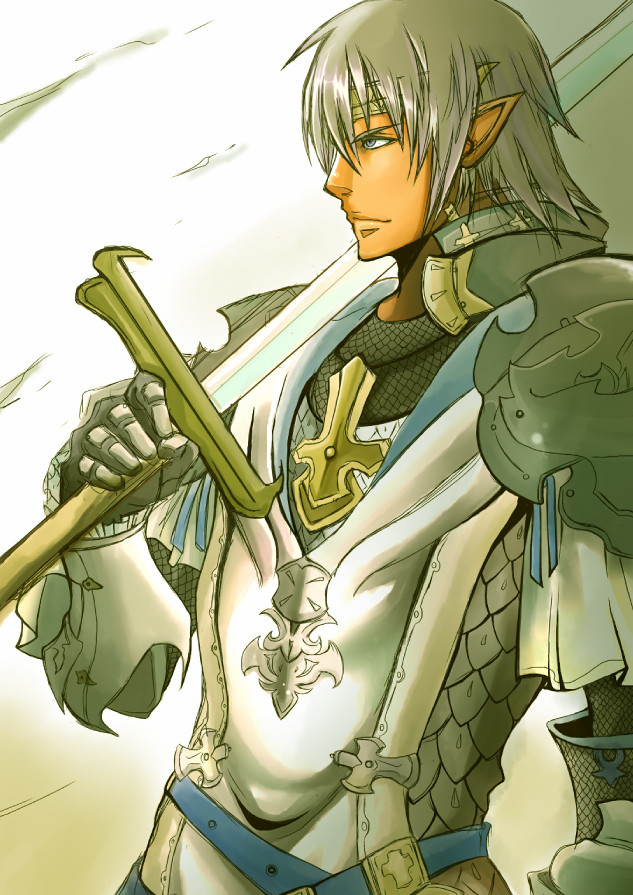 Yeah, I got nothin'. Final Fantasy XIV had beautiful designs and really cool-looking characters, but I've only heard horror stories from people who've actually played the game. Will the relaunch fix Square-Enix's problems? 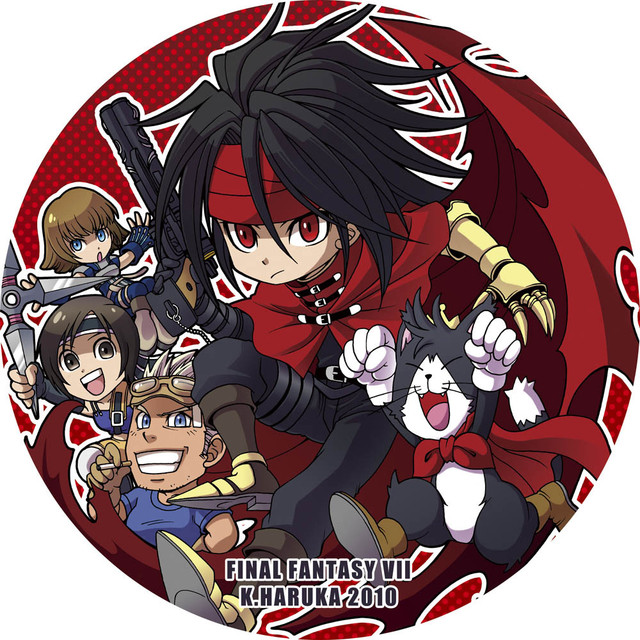 Back when it first came out, I felt an obligation to slog through Dirge of Cerberus. After all, it was the FFVII sequel we'd been waiting for all these years! We did learn an important lesson, though: Square-Enix cannot design a competent shooter in-house. Or really, any game that requires you to have actual reflexes--except Einhander, that was pretty awesome. 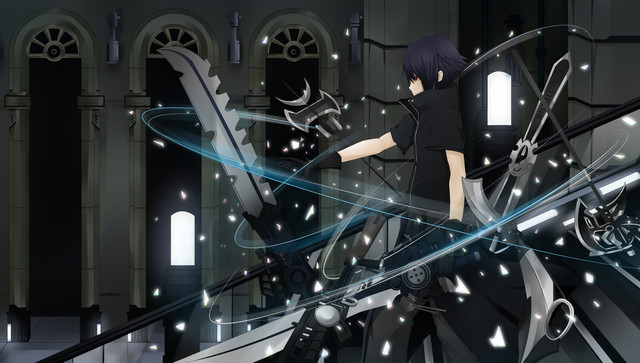 The more I see Final Fantasy Versus XIII's Noctis, the more I'm reminded of a certain Sharingan-bearing, Chidori-using emo dirtbag from a certain popular ninja series. Wow, I think I just made myself less excited for this game than I already was. 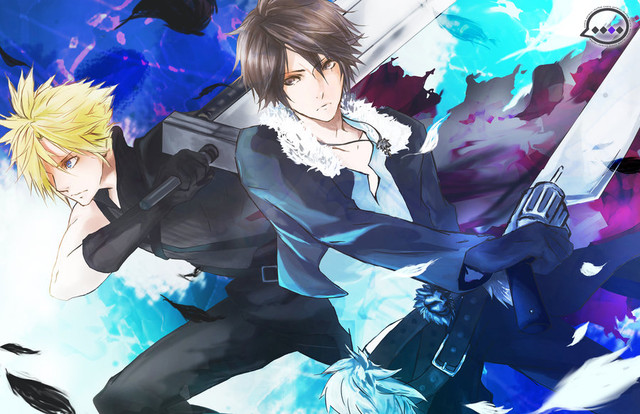 Dissidia Final Fantasy did some pretty cool things to match the RPG feel of the series it's based off of, but part of me wishes Arc System Works got their hands on the FF license--that way they can craft an actual competent fighter with RPG elements, like Persona 4 Arena! 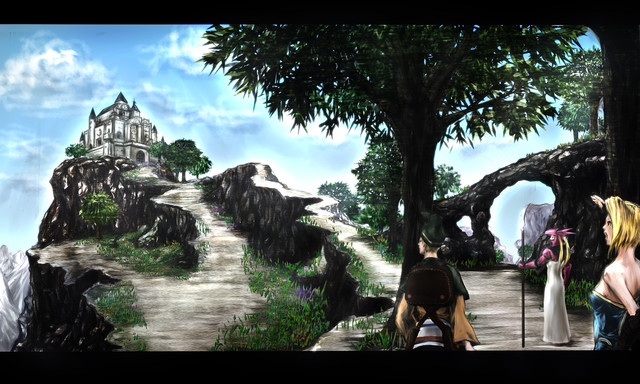 Don't just stand there and stare at the scenery, Final Fantasy Tactics people! If you were actually paying attention to the game, you'd realize that soon you'll have to fight for every single horrible uphill inch. 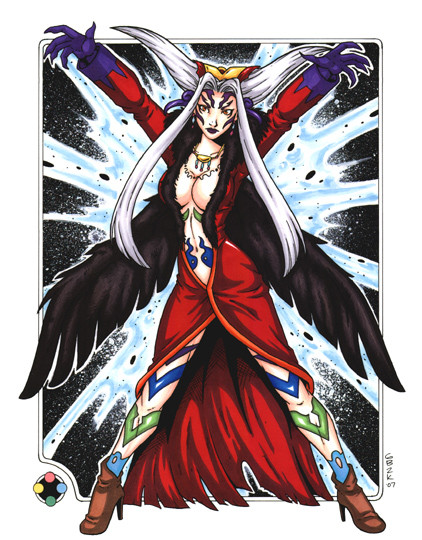 Props to you, gb2K, for actually doing (great) fanart of the most come-out-of-left-field Final Fantasy villain ever. Seriously, Final Fantasy VIII was at first about stopping a Sorceress, then a huge thing full of monsters, and then it was about a Sorceress from the past (!) who takes over the bodies of other Sorceresses (!!) and now she's going to erase all time or some crap (!!!). 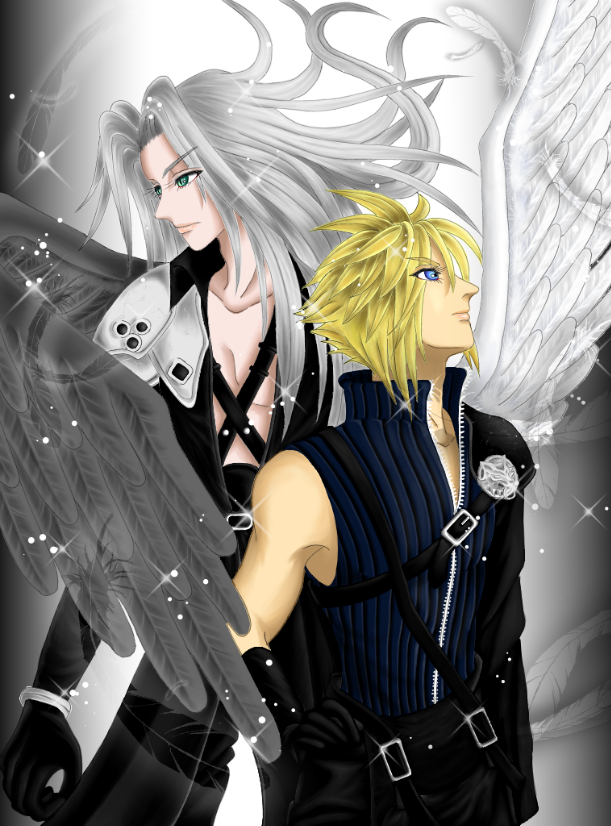 A while back, a reader was shocked that I found Final Fantasy VII: Advent Children to be a pretty-but-vapid snooze. So y'know what? I'm gonna watch it again tonight. We'll see how it holds up, and I'll tell you in the comments.*

*You couldn't pay me to watch Advent Children again. I'd watch Avatar in a theater full of furries first. 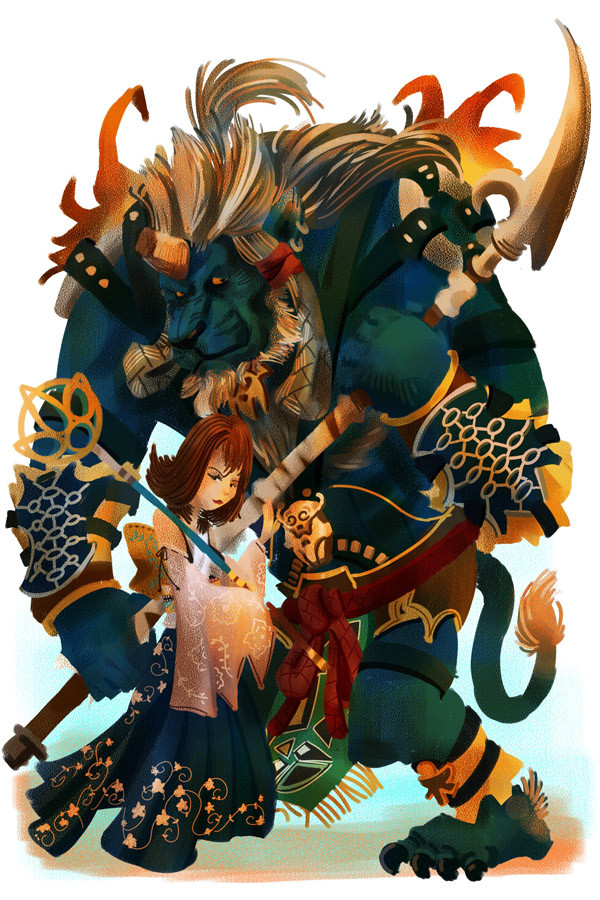 Y'know, Tidus is a pretty brave man. The girl he likes has a bodyguard who's basically a nine-foot-tall magic-using, spear-wielding Wookiee. Kihmari even tells him to back off, but Tidus is undaunted. Maybe there were some deleted scenes in Final Fantasy X where Kimahri's beating the crap out of him out in the woods while the rest of the party's setting up camp. Or maybe I just like imagining bad things happening to Tidus--I mean, I liked the rest of FFX's cast! 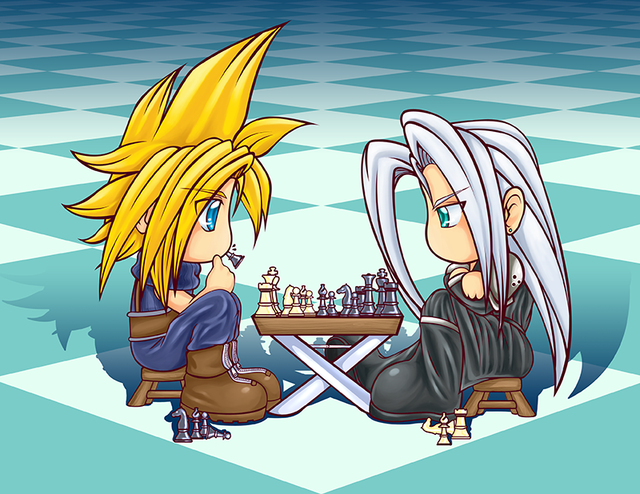 More exciting than the end swordfight of Advent Children. What? Chess can be gripping. 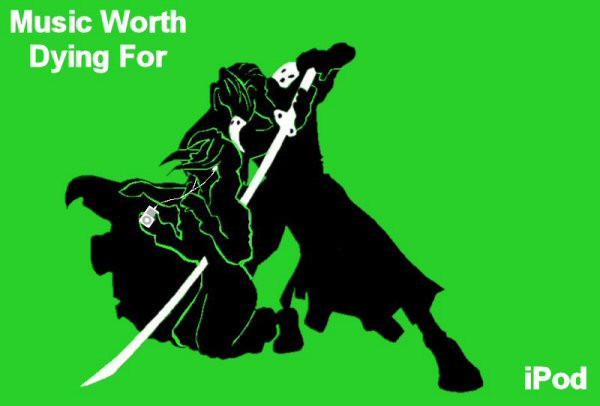 Ooh, nice one! Our judges will also accept "Guaranteed Not to Die On You After You Take it Out Once." Was that too much?

And that's more than enough snark from me for the week! So, even with all the big-name games coming out in the next month or so, I'm gonna have a fair bit of free gaming time--which Final Fantasy title should I replay for an upcoming Natestalgia? After the last one on my five favorite JRPGs, I thought I'd go back to that well and experience an older Final Fantasy from beginning to end. Sound off with your suggestions in the comments!

As always, your art is welcome here, regardless of your skill level or experience--send me a link to your work and I'll make sure to include it in a future installment! Next week, we're continuing the one-title theme for the month with a longtime anime and manga favorite--SAILOR MOON! Of course, this also includes Sailor Stars and Codename wa Sailor V--who do you want to see in the coming week's installment?

That's all for this week, folks--thanks for coming by to check out Fanart Friday, and have a great weekend!