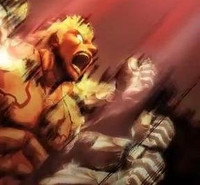 In terms of video games, 2012 was no 1998 (Half-Life, Metal Gear Solid, StarCraft, The Legend of Zelda: Ocarina of Time) or even a 2005 (Resident Evil 4, Shadow of the Colossus, God of War, Guitar Hero), but it still had a very impressive lineup of titles across most of the major systems. 2012 also saw the launch of Sony's powerful PS Vita handheld and Nintendo's unusual-yet-full-of-potential Wii U console.

Following up from yesterday's look at our favorite anime and manga of 2012, Crunchyroll News' writers and editors took a look back through 2012, picking out their favorite gaming experiences of the year. It also taught us something: some of us play a lot of video games. 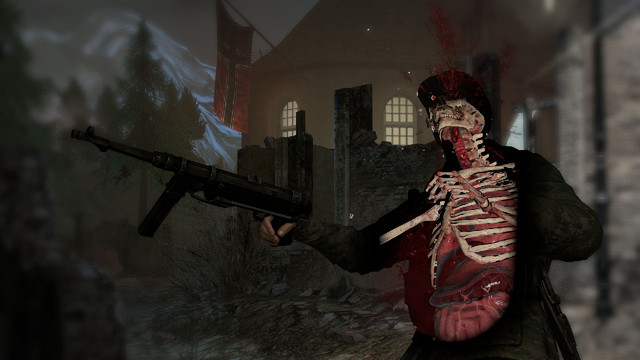 Sniper Elite V2- Vastly underrated WWII third-person shooter. Every money shot brings a medically horrifying slow motion depiction of bullets destroying the human body. Some next level video game gore and mayhem right here... but you dish it out to Nazis, so it's ok! 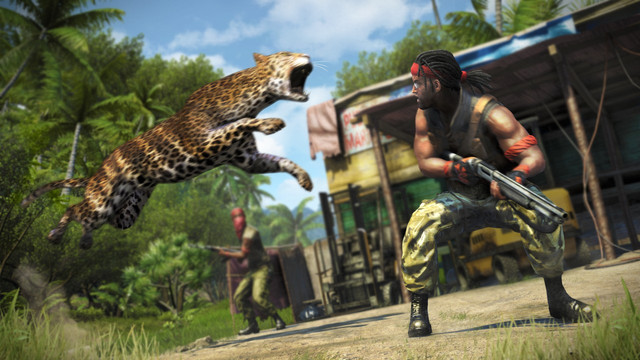 FarCry 3- Massive improvement on FarCry 2's open-world sandbox that actually remembers to play like a game instead of a real-time nature documentary. Beautiful, gratifying, fun. Also: the only game where you can throw C4 at bears this year. 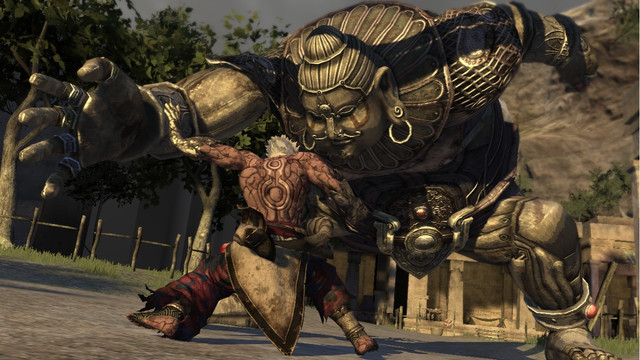 Asura's Wrath- Gorgeous visuals, intense story, a scale that won't stop escalating until it becomes downright cosmic. A welcome cross between the best of anime storytelling and button-mashing mayhem. 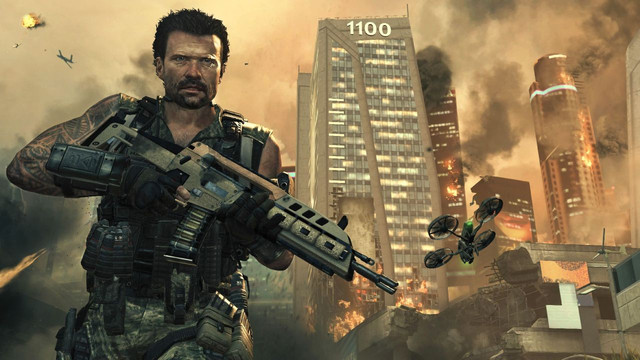 Call of Duty: Black Ops II- The multiplayer may have suffered from "more of the same" syndrome, but the single player campaign was a series best. I never thought I would get to shoot up a disco nightclub in a CoD game, but hey, this has come to be. 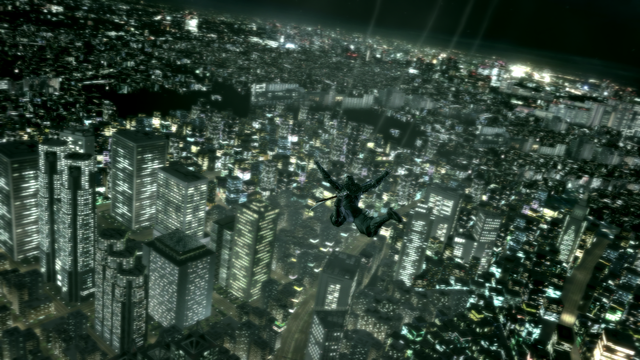 Best Old Game That I Discovered in 2012 and Played Until My Hands Broke: Ninja Blade (2009). Laugh all you want at this now-forgotten Ninja Gaiden lookalike. The bonkers action that goes down in this game is ninja vs. giant monster Z-movie heaven played out against a map-perfect Tokyo cityscape. My subconscious, basically. 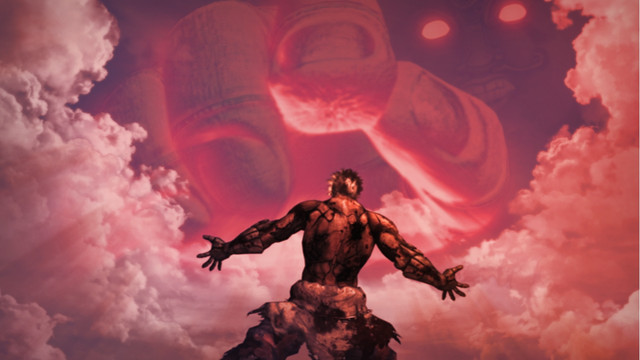 Asura's Wrath- I normally don't love QTE-heavy games, but CyberConnect2's buck-rowdy, anime-structured actioner made even the simple act of spreading your arms more exciting than most games' grandest set pieces. The fight on the Moon alone is worth the ever-dwindling price of admission. 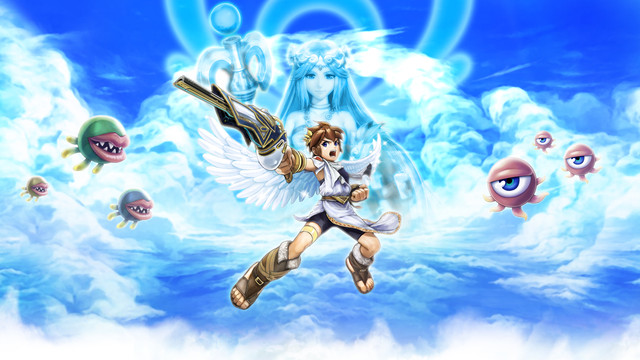 Kid Icarus: Uprising- The design here was not considerate to the way the 3DS is set up. That said, it's the best time I had with the portable, unfriendly controls and all, and the rousing music perfectly complement's Pit's grandiose adventure. 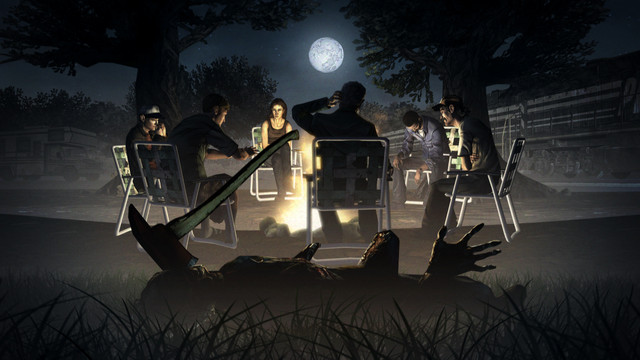 The Walking Dead- If I had to pick the most emotional, memorable experience of 2012, this would probably be it. The Walking Dead made me care about someone other than myself more than any game has before it, and it also made me second guess even the most seemingly inconsequential decisions. What a punch to the gut. 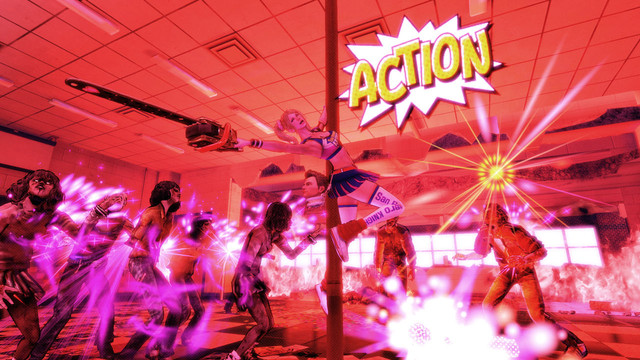 Lollipop Chainsaw- Probably Suda51's most welcoming game, and thanks to the writing of James Gunn, Lollipop Chainsaw manages to subvert a few glaring gaming stereotypes in the midst of truly addictive action. Could have done without a few mini-games, though. Baseball, begone forever! 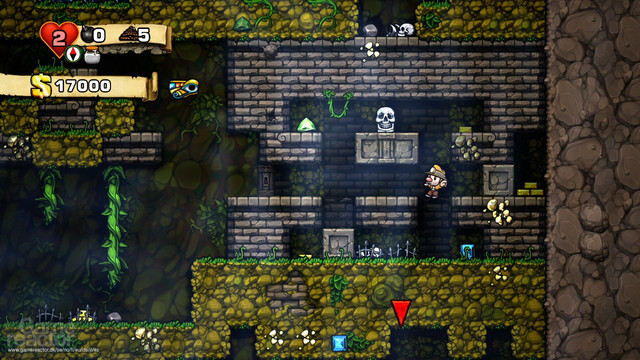 Spelunky- It's so hard! It's so fun! Spelunky still has me coming back trying to best my previous runs, and that's the essence of classic gaming right there. Sure, this actually came out on PC years ago, but dig the Xbox Live Arcade version if it's new to you. 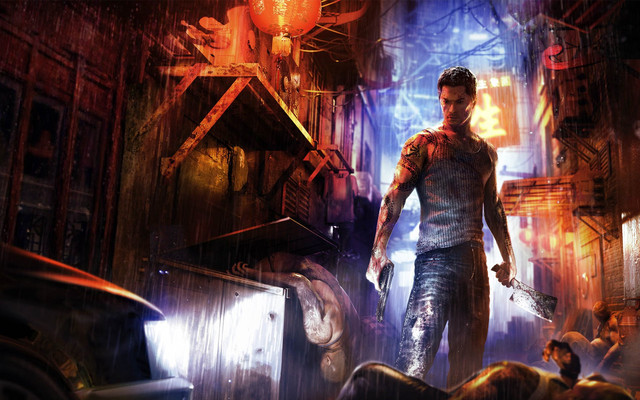 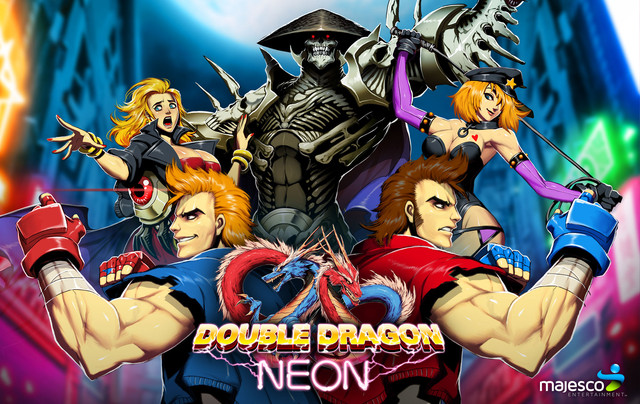 Double Dragon Neon- Didn't click with me until I initiated couch bro-op with a true bro. Dude, this game is so damn fun! Hits all the right nostalgic notes, but what a lot of folks overlooked is the replayability and the fun of maxing out powers and crafting the best bone-breakin' bro possible. Killer tunes, too! 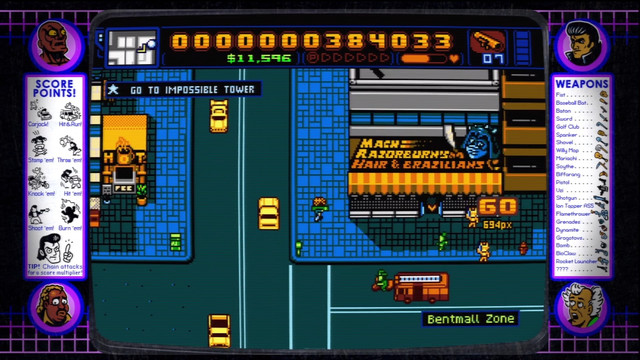 Retro City Rampage- Some of the jokes don't stick, and some of the missions don't fit, but overall no one could have asked for a more thorough and exciting love letter to video games past. 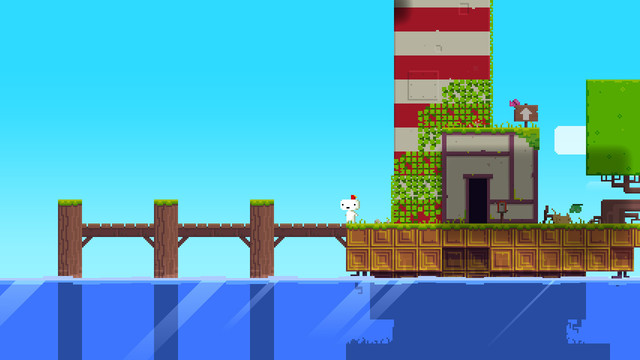 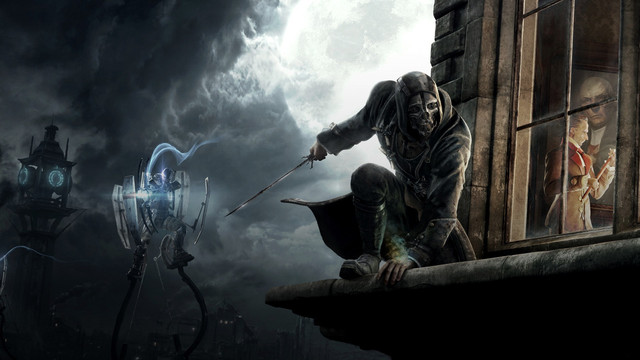 Dishonored- By granting you super powers and cutting you loose in a quasi-steampunk sorta-London, Dishonored asks what "revenge" really means to you, and makes you take responsibility for your actions in a living, breathing city that changes with your actions. Do you kill without a second thought, or do you make sure the innocent get to go home to their families? The flexible gameplay and gripping story also ensure plenty of replay value. 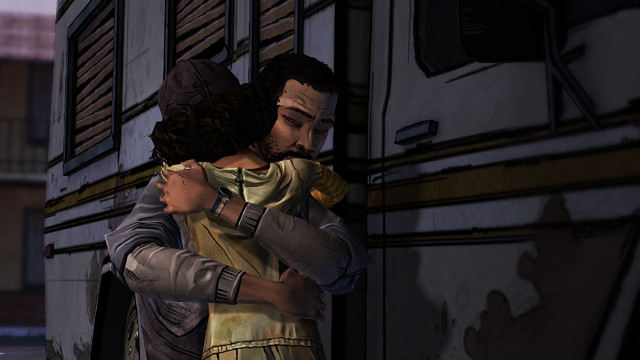 The Walking Dead- The more I look over the past year's games, the more it seems that 2012 was the year of thinking about somebody other than yourself. Who lives? Who dies? Just how far will you go to protect the innocence of a little girl? Everybody hates escort missions, but you'd have to be an absolute monster to not want to guard Clementine from a world where death can come at any moment to anyone for any reason. Also, it's nice to see a game that features more honest-to-God actual role-playing than most role-playing games. 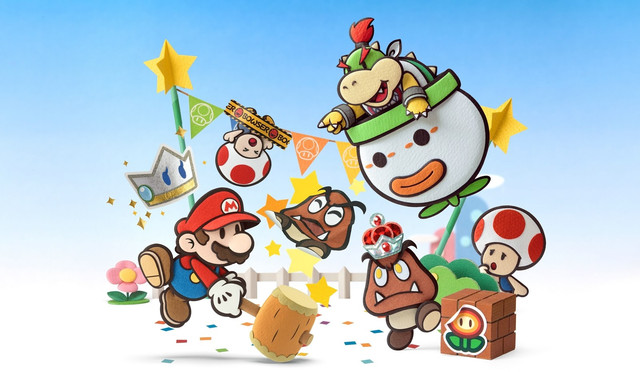 Paper Mario: Sticker Star- I tend to prefer "short burst" handheld games, ones that let me play for a while, then close my DS and go do something else. It takes a special game for me to run my battery dry, and Sticker Star is exactly that. Not as solid as 2004's The Thousand Year Door, but it's an ingenious and fun RPG that's very, very hard to put down. 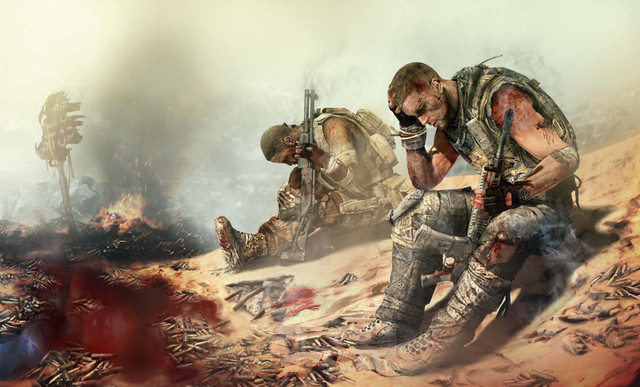 Spec Ops: The Line- The best way to describe The Line is that it's a video game about killing, specifically made for people who don't like killing in video games. Unlike the ridiculous Call of Duty: Black Ops II (yeah, I know my boss likes it), The Line shows war as what it is: mankind at its absolute worst. More importantly, it will show you at your absolute worst... and maybe that's why it didn't do so well. Because we all just want to be heroes, right? 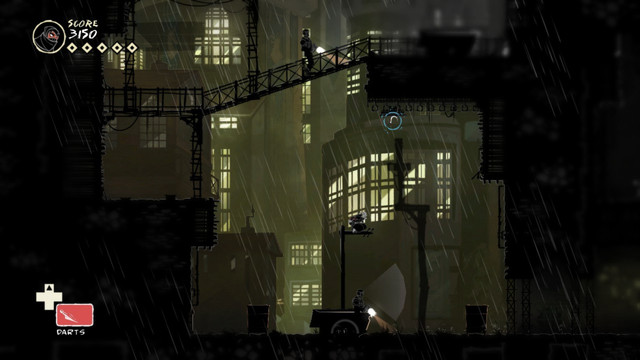 Mark of the Ninja- On the complete flipside of all that, I went batshit bonkers in Mark of the Ninja, terrifying guards by hanging their friends from streetlights by a kusari-gama, then making them accidentally blast their coworkers because they're freaking out at every shadow that moves. Taking cues from Metal Gear Solid 3--one of the best stealth games ever made, bar none--Mark of the Ninja rewards creativity and improvisation in addition to expecting strong 2D platforming skills... and you'll develop one hell of a sadistic streak along the way. 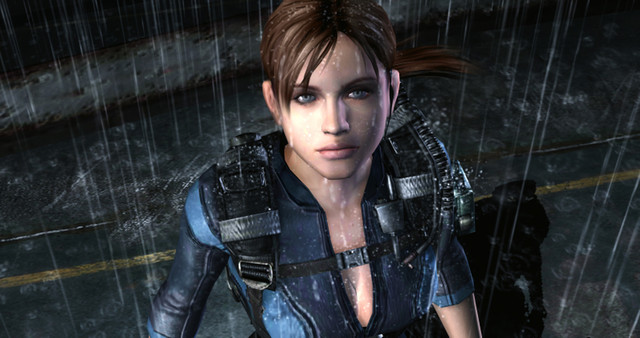 Resident Evil: Revelations- Aside from 2010's horrifying Amnesia: The Dark Descent and the creepy Alan Wake, survival-horror games have become shoot-'em-up actioners with tough-as-nails heroes that just happen to face monsters. Along comes Resident Evil to show us what we've all been missing, and now we can take it on the go! Revelations plays like a new Resident Evil, with smooth controls and a variety of options in combat, but feels like one of the early titles for its oppressive atmosphere, powerful enemies, and severe lack of ammunition. 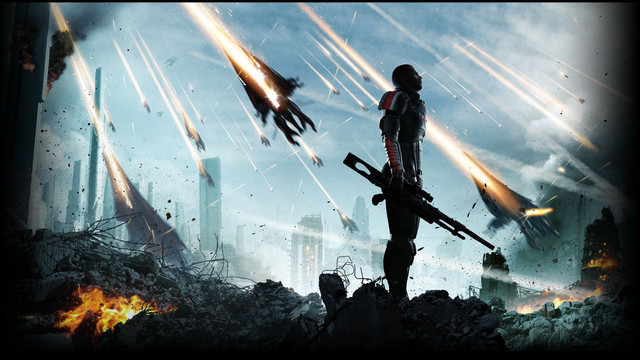 Mass Effect 3- An imperfect five-minute ending does not undo over a hundred hours' worth of excitement, laughter, and really hard calls. Mass Effect 3 spent hours giving everybody a send-off, from overeager jackass Conrad Verner to singing scientist Mordin to Garrus Vakarian, your best bro in the entire universe. My Shepard didn't need a parade. He got to say goodbye to the people he cared about most, let the Illusive Man eat lead, flipped that switch and died knowing that the galaxy would be safe--he knew this was gonna be a one-way ticket. Apparently, thousands of other Shepards lacked conviction.

I guess that's what role-playing's really about, huh? 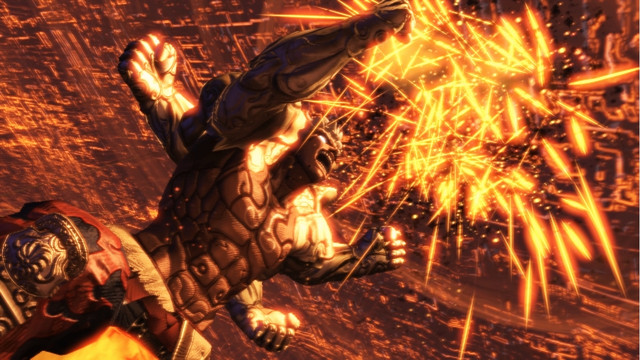 Asura's Wrath- Very rarely do I grunt with effort while playing a video game, or roar in victory. I sit on my ass with a controller and maintain a relaxed posture--even during extremely close online fighting game matches, where I give a pleasant, sportsmanlike nod to the screen whether I win or lose. But Asura's Wrath is not a game to be played slack-jawed, idly watching the events of the game. No, you steel your eyes and square your jaw and put your hip into it when you play this game's QTEs, which are some of the most intense and satisfying that I've ever seen. Every other QTE in every other game I play will forever be judged by this, the gold goddamn standard. 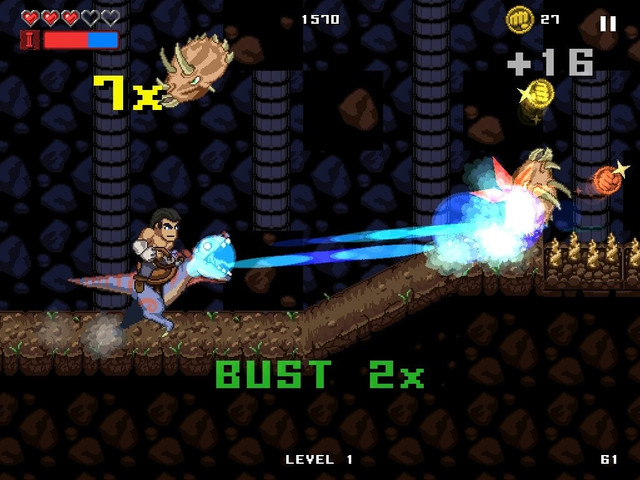 Punch Quest- Phone games are simple fun, and it's hard to find more simple fun than "punch everything in front of you, forever and ever." Punch Quest lets you fight the forces of darkness with nothing but your fists, ride laser-breathing raptors, transform into an acrobatic gnome, and basically do the impossible/see the invisible/row, row, fight the powah through an insane, neverending dungeon with RPG-like ability growth and character customization. It's old-school arcade fun at its best, and it was free. Hell, it costs a dollar now--that's still an awesome deal. 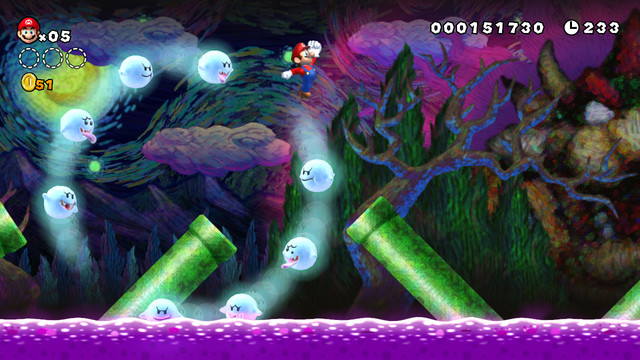 New Super Mario Bros. U- If Asura's Wrath makes me want to kick ass and take names, New Super Mario Bros. U puts a big, happy smile on my face--the kind that I had when I first started playing video games. Unapologetically familiar at first, New Super Mario Bros. U quickly throws some nasty surprises at gamers, testing your platforming skills while giving you beautiful worlds to marvel at. Seriously, look at that level--clearly inspired by Vincent Van Gogh's The Starry Night--and tell me you aren't moved. Video games are art, and video games are capable of impressive feats of artistry, even if it comes in the form of a well-worn, always-comfortable pair of shoes. 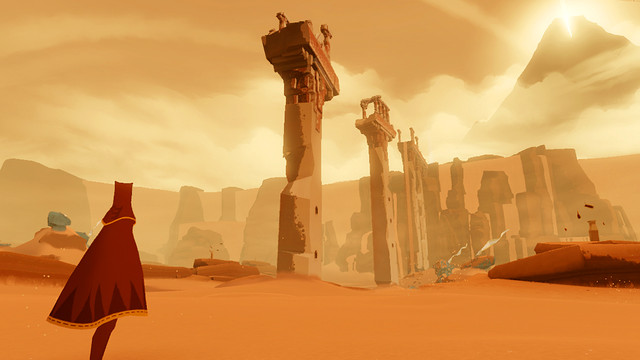 HONORABLE MENTION: Journey- I always try to avoid using the word "haunting" to describe video games, but Journey does have a haunting, ethereal beauty to it. It also does something very few video games do nowadays and actually lets you learn--no "press X to jump," no obvious clues. Just you, occasionally a partner, and a massive world to explore. Many people have said that Journey is less a "game" and more an "experience," and they're right. Journey teaches us that playing games with people doesn't have to be about cooperation or competition--sometimes, it's just about having somebody there with you.

What were your favorite games of 2012? Sound off in the comments!

There's one more to go, folks--tomorrow, we'll be wrapping up CRN's 2012 Favorites with our favorite MOVIES of the year!