FEATURE: 6 Anime Characters That Make the Hero Look Like a Chump! 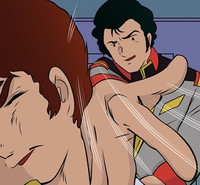 6 Anime Characters That Make the Hero Look Like a Chump

At times anime can have some really amazing lead characters. Heroes that grab the whole of your attention and immerse you into the story. I’m sure you can think of them off the top of your head, some of them are most likely some of your favorite anime characters of all time, but sometimes there are side characters that just completely steal the show from the protagonist. Sometimes it’s by design of the story, but sometimes it’s just because those side characters are so damn cool. In any case here are those guys that the story isn’t really about but wind up making it about them anyway.

*Fair warning. There are spoilers for the following shows so venture forth with that knowledge Crunchzillas!

Kuroko’s Basketball is about a little known kid named Kuroko, and he comes from a super powerful team of middle school basketball players known as the “Generation of Miracles.” Each one of the kids on the team is blessed with some sort of super basketball power, ranging from perfect shooting to the ability to copy a player’s maneuvers. Kuroko gets the short end of the stick though since his power is to not be noticed, which is fine and dandy, but makes for a pretty boring main character. Some might argue that Kagami fills this void, and he does an adequate job, but once Aomine is introduced it’s game over. 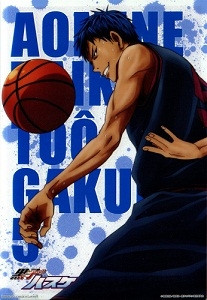 I mean LOOK at this smug bastard.

Aomine’s power is “technically” classified as “unusual speed” but what  really sets him apart is his home brewed style of basketball. What kind of home brewed style of basketball? Street ball. An incredibly flashy style of basketball with no specific technique, and which makes for some AMAZING action sequences at the end of the anime. Effectively after Aomine is introduced in the anime it’s a constant flurry of him breaking all of the other player’s minds with his totally amazing basketball moves. Between Kagami’s jumping power and, Aomine’s off the wall and unpredictable style of play it make us forget Kuroko even existed. Then again I guess his power is working? Let’s just hope that in the next season Aomine doesn’t get into any fights so he can’t play basketball anymore. 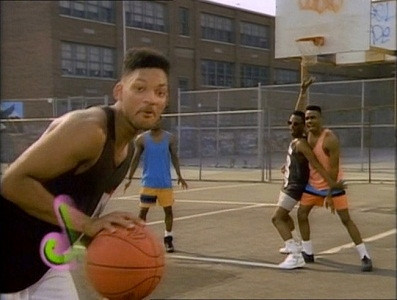 Then he’d have to live with his auntie and uncle in Bel-Air.

*Also congrats to me for making it through an entire Basketball writeup without having to resort to a “ball handling” joke. Thank you. Thank you.

Gurren Lagann is a mecha anime about a young boy that starts out by drilling holes, and by the end of the show is tossing entire galaxies around in the name of peace, justice and spirals. The way he achieves this kind of meteoric growth however is through his almost god worship obsession with his mentor Kamina. 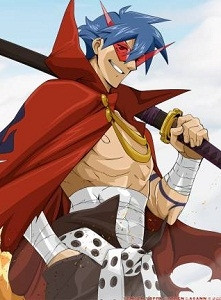 So while Simon starts out as a complete and utter nobody, Kamina goes around schooling fools with his outright aura of manliness, throwing Simon’s mech like a fastball pitch through guys some episodes and chopping down bears with his sunglasses in others.  The thing about Kamina is that in a world where it seems that the “cool” thing to be, in anime anyway, is to be a pacifist mech pilot wussbag , Kamina’s hot blooded love of manliness was a breath of fresh air.  So when he was taken from us so early into the series it only made us obsess that much more over him. Well, after we were done rage-crying. If it’s any consolation, the new human society that was erected afterwards was heavily influenced by his personality, and moral code. So if you think about it Kamina essentially gave birth to a super manly human race complete with historical texts and teachings of his manly deeds. Can you imagine going to a public school that taught you how to be manly? 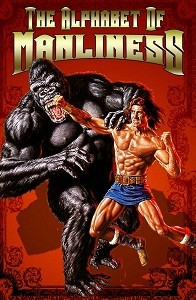 “A” is for punching gorillas in the face.

4. Hiruma is just way too cool to ignore – Eyeshield 21

I’ll try to stop making Eyeshield 21 references in my articles, but it’s just such a perfect anime about completely heterosexual manly hopes and passion. For those that don’t know about this masterpiece of hot blooded men the story is that Sena goes from unknown high school kid to star running back of the Deimon Devil Bats. Sena is an absolutely marvelous character, with just enough wuss to allow for growth, but enough resolve to make him endearing. With all of that put on the table who in the world could upstage him? 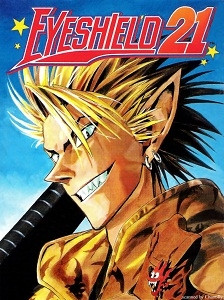 Hiruma is the quarterback for Deimon, and he actually isn’t particularly manly. His strength and speed are nothing really noteworthy and initially he looks like he could be the antagonist. This all belies his most awesome weapon, his intense devil brain. Not only does Hiruma infallibly scheme his way through the entire series, but he acts as a focal point for the Deimon crew and the de facto leader of the Devil Bats. Every time Hiruma gave his trademark grin you automatically knew that he had secretly schemed something several episodes prior, and it allowed the viewer to appreciate the tactical aspects of football with it. Which is really amazing that I was able to appreciate the tactical musings of football seeing as how I knew nothing about football before the anime carefully explained it to me.

The beginning and end of my football knowledge.

3.  Sinbad is naked – Magi: The Labyrinth of Magic

Magi follows the adventures of Alibaba, Aladdin and Morgiana as they go about capturing dungeons and solving the world’s economic troubles. All of these characters are really awesome in their own right, Aladdin has that carefree and can do attitude, Morgiana has just enough tsundere to be loaveable and Alibaba has that amicable face that makes it into so many yaoi doujin. However all of that pales in comparison to the grandmaster of dungeoneering. 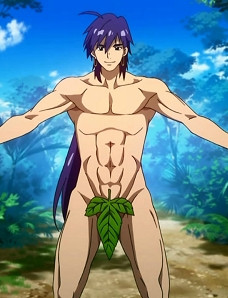 Aside from the fact Sinbad makes the most ridiculous introduction in the history of anime, he is legitimately an awesome and well thought out character. In the anime Sinbad sits back and takes the mentor role for Alibaba and company. However in several instances he has had to, ahem, flex his considerable bulk in order to give certain bad guys a beat down, or knock some sense into Alibaba. For those of you that are dedicated enough to read the manga you will find that Sinbad transforms via his ability to enable a Djinn equip for any of his metal vessels. These transformations are so incredibly cool, and give him some really sweet armor and powers. I mean tranformations automatically make you cooler, especially in Japan. 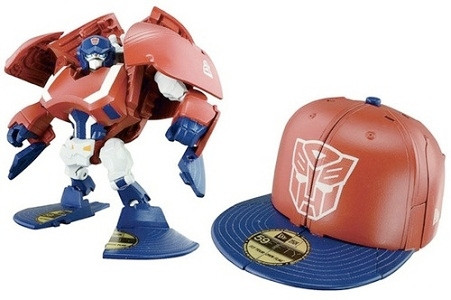 It certainly works for robots on a daily basis.

2.  Ruri hates us and we tell her “thank you” – Martian Successor Nadesico 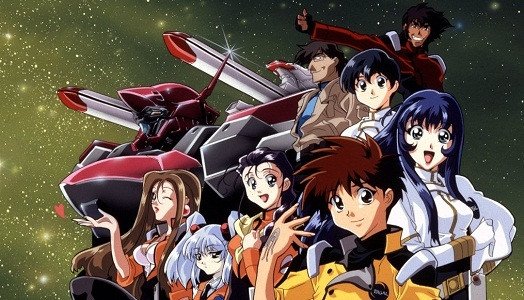 Back in dark ages of VHS anime I remember watching a little gem called Martian Successor Nadesico, and it had robots in it. Naturally however, in a post Amuro Ray world, the protagonist, when given a super cool robot, had to whine about war and killing and some other nonsense. Oddly though a character would creep out of the woodworks and just steal the entire show, and she didn’t even need super mecha to do it. 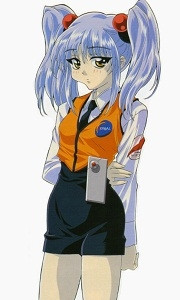 Twelve-year old Ruri was the child genius that worked onboard the Nadesico operating the super computer known as “Omoikane.” Later on it’s found out that not only is she a super genius born from experiments, but that she is also the princess of “Peaceland.” What makes her capture hearts though was that she was one of the first major tsundere girls in a popular anime. Always having control of her emotions and having that rough exterior made her so irresistible to fans. Most guys just didn't know what to do with themselves and just fell head over heels in love with her, along with developing a mild lolita coplex. In the end we can all just celebrate our love for tsundere. 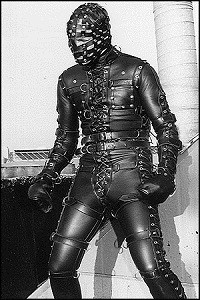 Some people however think that it’s only about the tsun part. Dere is apparently optional.

1.  Char is so awesome his character becomes a franchise staple – Mobile Suit Gundam 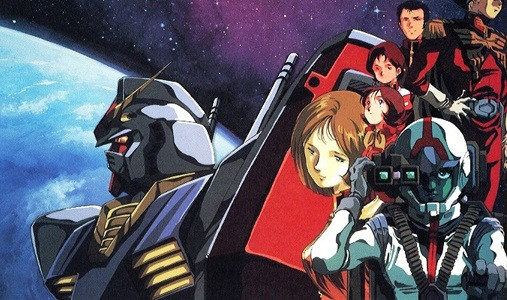 I made a comment about a “Post Auro Ray” world earlier, and I just want it to be known that I consider Amuro to be the goober that stank up all of the mecha heroes. In one of the most iconic and influential mecha anime to ever be released Amuro was introduced, in what would be a genre staple, as a nobody mecha pilot that didn’t like to fight. He wanted to protect his friends but not kill anyone in the process, effectively “having his cake and eating it too.” The key to the success of Gundam (aside from awesome Gundams) was that it was a story of personal growth, from a naïve child to an adult. Eventually he comes to the realization that you’re going to have to kill some people and blow up some mechs in order to have galactic stability, and in this way the viewer is allowed to watch the Amuro's metamorphisis from child to adult. This kind of character development is what makes Gundam so successful. Unfortunately, in subsequent Gundam series, the hero can indeed have their cake and eat it too, letting them be a crying goober the entire time. Luckily Char is able to span several Gundam series to make crying Gundam pilots grow a pair. 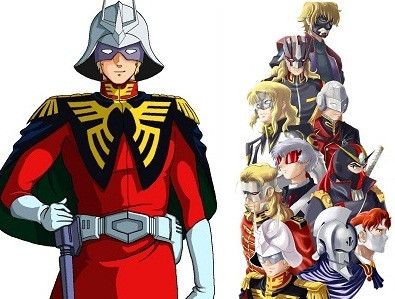 We are the catalysts of your puberty. Know us well.

Char Aznable is kind of like if Darth Vader had a child with The Lone Ranger. He’s suave, smooth and has brazenly painted red or gold mecha. Pretty much he’s the most fabulous thing you will ever see flying around in space. His character has become so popular that his ideals, beliefs and general appearance have become a mainstay of the Gundam franchise. The overarching purpose of all of these “Char Clones” is to be that of the catalyst of the protagonist’s personal growth, and in most cases, but not always, the “Char” character is the main rival of the protagonist. So thankfully Char and his cadre of clones are around to instigate growth, because not every Gundam series was fortunate enough to have a Captain Bright. 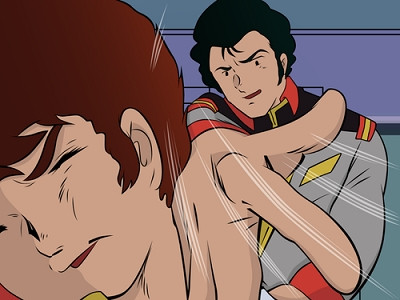 BRIGHTSLAP SOME MAN INTO YOU!!!

John Zabate can be found online at