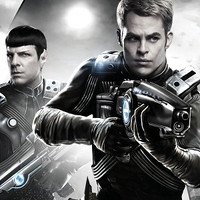 I love Star Trek. I'm one of the small but vocal minority of lifelong Star Trek fans who absolutely loves the reboot, but that's also partially because my favorite episode from all five TV shows is TNG's "Starship Mine." 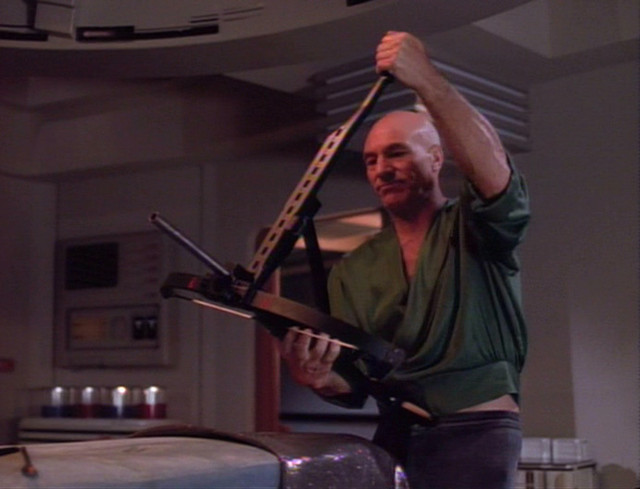 It's the one that's basically Die Hard on the Enterprise, and Picard kicks all kinds of ass with a crossbow and improvised weaponry.

More than almost any past incarnation of Star Trek, the latest reboot should lend itself to the fast pace and high-octane action of a video game, and that's what Digital Extremes has tried to do with a third-person action game in the vein of Uncharted and Gears of War. On paper, it doesn't sound like a bad idea, and to be honest I was pretty optimistic about this game back when it first announced. It would be great if this were just a mediocre licensed game with unremarkable gameplay and a few missed opportunities--unfortunately, the finished product is far, far worse than that. 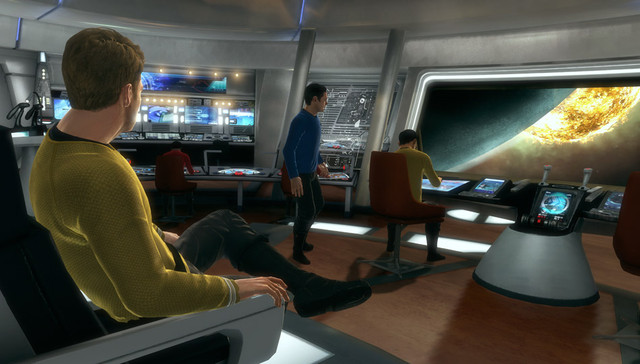 Some time after the events of 2009's Star Trek, this game (which is also lazily titled Star Trek, so we're just going to call it Star Trek: Gornbusters) starts with the Enterprise responding to a space station's distress call, so Kirk and Spock have to suit up and help everybody get back safely. This is probably one of the most frustrating and dumb tutorial levels I've ever come across, as you immediately have to fight against the game's wonky camera and sloppy controls. There's a cool-looking segment-- 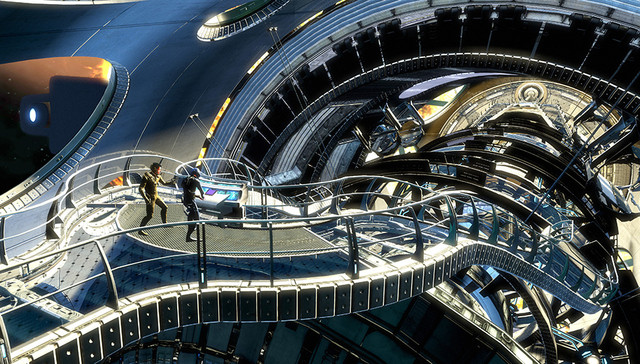 --this one! Where you have to run through a zero-gravity environment while working together to solve a sorta-puzzle. One player has to scan a panel to make these moving mechanical rings stop, while the other looks for a locking mechanism and shoots it. It sound pretty basic for a co-op action game, until the camera starts wildly moving up and down trying to automatically adjust itself even though you're already controlling the camera with the right stick. When you're trying to stop the last ring, you have to occasionally take cover so you don't get hit by bursts of flame, but the game's cover mechanics are often uncooperative, leading to repeated, frustrating deaths. In most action games, you simply tap a button and you're "stuck" to cover, but in Gornbusters, it's not guaranteed that you'll stay in cover even if you're sitting in one spot not doing anything. 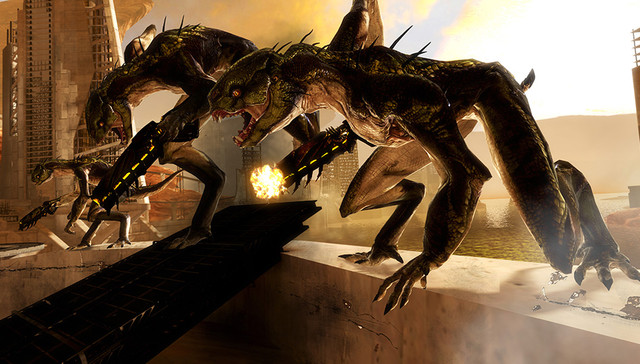 The story quickly takes a turn from "basic" to "stupid," as the reboot universe's Gorn are introduced, and Kirk and Spock exchange dull back-and-forth dialogue as they try to recover the game's MacGuffin. Now, 2009's Star Trek had a pretty basic plot that was really only an origin story that introduced us to the characters and world. It wasn't bad by any honest stretch, just kind of there--the real point of the movie was to make us like the characters, and it did that just fine. In Gornbusters, it's hard to even like the characters! Chris Pine and Zachary Quinto have a lot of bromantic chemistry in the movie, so you'd think that would translate to the game--unfortunately, their sad, wooden delivery of the game's dialogue is painful to deal with. Banter sounds forced, and most of what you'll hear is repetitive instructions telling you to do things you're already doing. For those of you wondering, the entire main cast is in the game, but their lines are also equally phoned-in--Zoe Saldana sounds bored as hell, and Simon Pegg seems to have a "what did I just read?" tone to his lines. 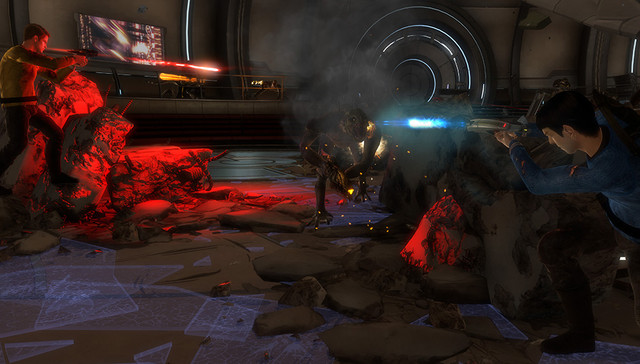 Star Trek: Gornbusters tries hard to be an epic, unforgettable experience. The action is big, with Kirk and Spock trading fire with waves of enemies on spaceships that are crash-landing in a burning city, huge boss enemies, and (attempted) tension as both players use brains and brawn to overcome obstacles. However, it's hard for me to honestly say that the game keeps things fresh, because while the scenery changes frequently, you're still going to be having cramped gunfights in samey corridors, that then turn into hilariously easy gunfights in spacious courtyards. Every now and then you'll have to fight a boss or midboss-type enemy, but even those blend together after a while. When the pace changes--for instance, in an early sequence where Spock must carry a wounded Kirk to safety--it becomes messy and frustrating. Only Kirk can shoot, but only in a limited radius, so the player controlling Spock must slowly turn him to face enemies so both players don't die. 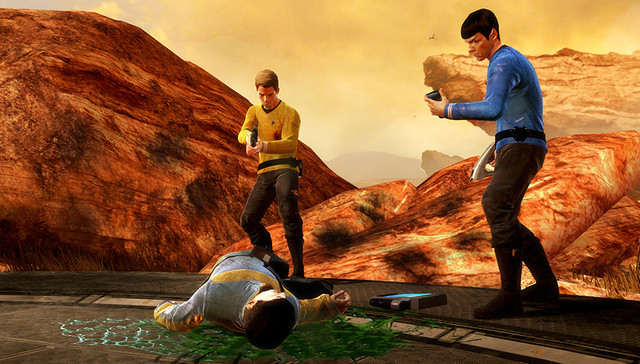 You're also encouraged to explore, and scan everything like you would in Metroid Prime or one of the Arkham games. It's actually kind of hard to go off the rails in a game as linear as this, so all you're doing is moving down the same corridor very slowly while pointing your tricorder at anything that seems interesting. Experience goes toward leveling up your tricorder and guns, but in a hilariously boneheaded move, you can't leave the upgrades screen unless you've bought all available upgrades, making it difficult to save up for actual useful upgrades--just pray you don't hit the Back or Select button on accident. The tricorder also allows you to scan the area for enemies, briefly showing their position and the direction they're facing, so stealth is possible, but with the already-mentioned clunky camera and awful controls, it's usually more worthwhile to just fight it out. I think it's also very important to bring up the fact that Kirk's "stealth attack," a sleeper hold, looks like he's humping the enemy. 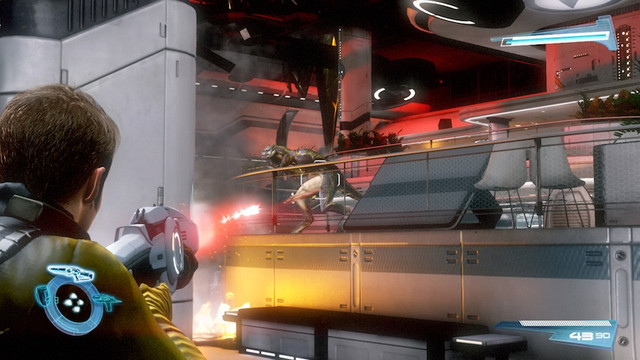 The basic idea behind a cover shooter is to have a somewhat fragile character, so you're encouraged to stay in cover and pick your shots. Charging into the line of fire should be very high-risk, but in Gornbusters I was able to wade into enemy ranks, shoot from the hip, and punch out just about everything on Medium difficulty. There is little to no reason to use anything but the basic Phaser, since it has decent range, good power, and a stun setting that is a thousand times more useful than any other generic-ass weapon you'll pick up in the game. Seriously, you can beat most enemies by stunning them, then running up and scoring a one-hit KO. When you reach bigger enemies, just keep plugging away at them with your infinite-ammo gun. AI allies set a new bar for stupidity, running in circles and bumping into walls so often that I needed to direct them to objectives myself more often than not. 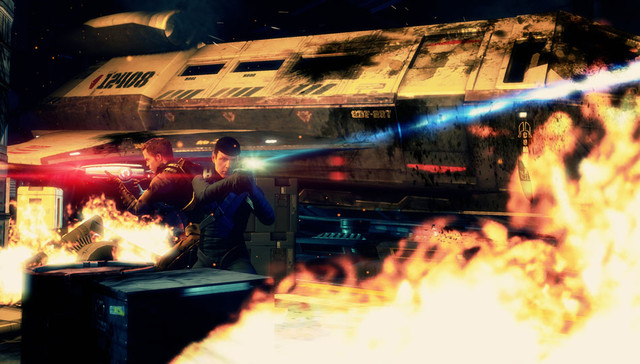 Star Trek for PS3, 360 and PC is a wreck. It's a forgettable third-person shooter that would have felt more inspired if it shamelessly copy-pasted from better-designed games. It's frustrating to play in co-op due to camera issues, and irritating in single-player thanks to major AI problems. As an almost fifty-year-old franchise and a pillar of science fiction, Star Trek deserves much, much better than this. Y'know who should take the reins next time? TellTale. Tell me that wouldn't kick ass.

+ The music and sound effects really give a great Star Trek atmosphere, with beautiful environmental design

+/- It's great to have the entire main cast of the 2009 reboot, but the voice acting is flat and phoned-in

+/- Emphasis on exploration, leveling up, and scanning your surroundings is good, but totally unnecessary thanks to a hilariously overpowered starter weapon

- Terrible camera that you have to constantly wrestle control from, especially in co-op

- Even worse AI--enemies and allies alike are dumb as rocks, making the game by turns super-easy and frustrating

- Brain-dead plot that plays out like bad Star Trek fanfiction, including the skankiest-looking Vulcan I've ever seen

"Star Trek" Director May Be in Line to Direct "Star Wars"