FEATURE: Why You Should Be Watching "Yatterman" on Anime Sols 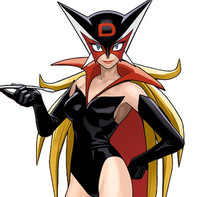 Anime Sols is doing incredibly well by picking up classics that people might not entirely realize are classics until they're readily watchable.  Things like Creamy Mami and the 2004 adaptation of Tezuka's Black Jack have already been raking in both hits and donations, helped along by a consistent release schedule. Meanwhile, a Tatsunoko classic – with revived interest thanks to a recent film adaptation by cinematic madman Takashi Miike – has been delivering a one-two punch of its own: the 1977 series Yatterman, as well as its 2008 reboot. 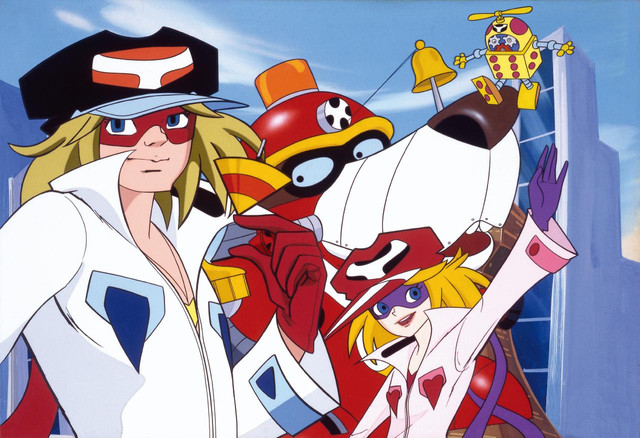 Yatterman was, and always has been, kind of a big deal, though lack of distribution has hidden it from an American audience for a long time. Three characters are playable in Tatsunoko vs. Capcom, but that's pretty much been the extent of their American exposure. It was the second in Tatsunoko's Time Bokan Series, which focused on various teams of youngsters traveling through time and space to thwart various trios of villains. Yatterman was different, though, in that the time travel element was replaced with spoofs of modern-day international locations.

Our heroes are Gan-chan and his girlfriend Ai-chan, the son of a toymaker and the daughter of an electrician respectively.  In the same town are the Doronbo Gang – the scantily-clad Doronjo and her henchman, Tonzler and Boyacky – who are on a mission from their boss Dokurobei to obtain items called Skull Stones. When assembled in one place, these stones will point the way to the world's largest gold deposit.  In order to stop them, Gan-chan and Ai-chan become the masked heroes Yatterman-1 and Yatterman-2. Riding Giant Robo-style on their robot dog Yatterwan, they chase the villainous team across the globe to stop them from stealing precious artifacts that may (but generally don't) contain Skull Stones. 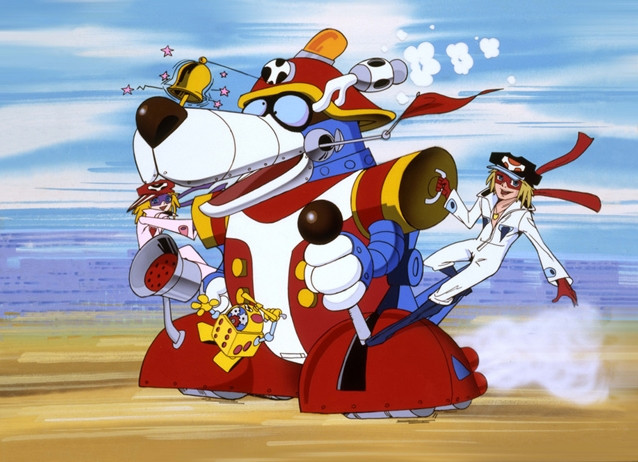 If you can't guess, this show is ridiculously formulaic. In fact, here's an outline of pretty much every episode: Dokurobei tells the Doronbo Gang where a Skull Stone is. The Gang set up a shady business to rake in enough to fund a robot (usually themed to said business) and take off for foreign parts. Gan-chan and Ai-chan catch wind of the plot and chase after them on Yatterwan. Hijinks ensue. A robot battle commences. And just as things are looking bad for our heroes, Yatterwan spits out the “secret surprise robots of the week,” a team of tiny machines that inevitably bring the bad guys down. The Skull Stone turns out to be a fake, and the Doronbo Gang ride away on their three-seater bike awaiting their “weekly punishment” from Dokurobei. And Doronjo usually loses about 85% of her clothes. 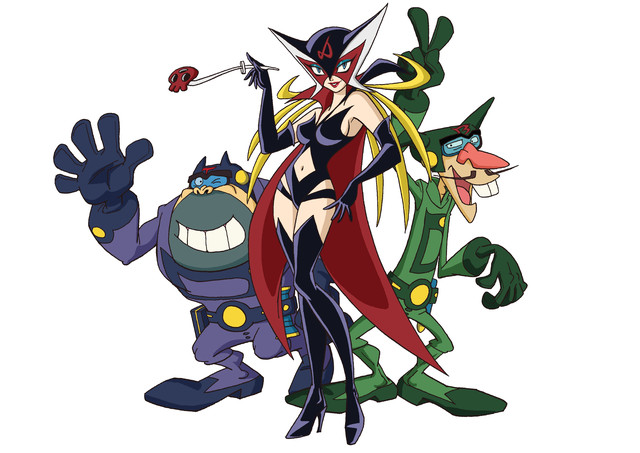 That's it. That's the show. But you know what?  It's fun not in spite of the formula, but because of the formula.  On the off chance that the Gang actually do something right, Dokurobei doles out the weekly punishment anyway because “the audience is waiting for it.” There are more than a few nods to the audience within individual episodes, never mind the series as a whole. It knows exactly what it is, and it has fun with the structure and predictability.

In 2008, Tatsunoko produced a Yatterman remake, and the old formula was still in place. The character designs changed maybe a little, some of the voice actors switched out, and the Skull Stones became Skull Rings.  But other than that, it still follows the exact same plot week-to-week as the original.  Even the Doronbo Gang are the same: Doronjo, Tonzler, and Boyacky all have the same voice actors as the original series.  A lot of anime remakes go darker or more complex, and that works for a lot of them.  But with Yatterman, they knew that if it ain't broke, you shouldn't fix it. 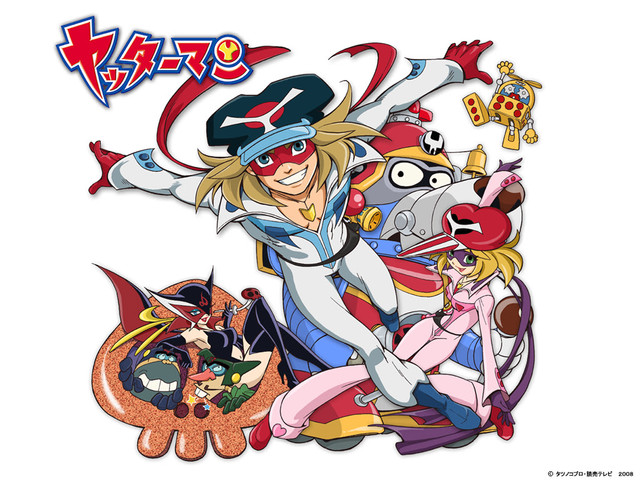 The big difference between the 1977 and 2008 series is that the latter is far, far more dependent on pop culture … and I don't mean stuff that will be readily recognizable to anime fans. Yes, you'll catch characters from other Tatsunoko properties wandering around in crowd scenes, but they also draw from the Japanese mainstream on a regular basis.  For example, in one episode the Doronbo Gang break into a TV studio by building an Akiko Wada mech (the cultural equivalent of a Rosie O'Donnell bot); in another, the infamous Kano sisters appear as themselves.  However, this doesn't stop the show from being accessible to Western audiences, as the references are relatively self-explanatory and no one episode hinges on them entirely.

So, we know it's a fun show. But let's get down to hard facts. You're not here to root for Yatterman – you're here for the Doronbo Gang. It's okay to admit it.  Gan-chan and Ai-chan are cute and all, but the villains are far funnier and more interesting. And you can't help but develop a weird sympathy for them. Yeah, they're greedy, but they're doing the best they can under a boss who seems to enjoy watching them fail more than anything else. 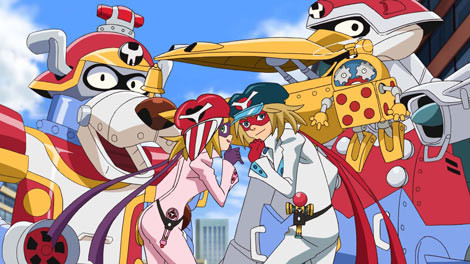 For a while, Anime Sols only had access to the new series, but the original was added right before opening day. You can watch and pledge to both – New Yatterman episodes drop on Monday and original series on Thursday. If you're lamenting the loss of good old-fashioned Saturday morning cartoons, this may well be the thing for you.

Kara Dennison is the artist and co-writer of the webcomics at conscrew.com