A stylish cyberpunk adventure that you won't soon forget 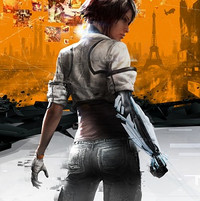 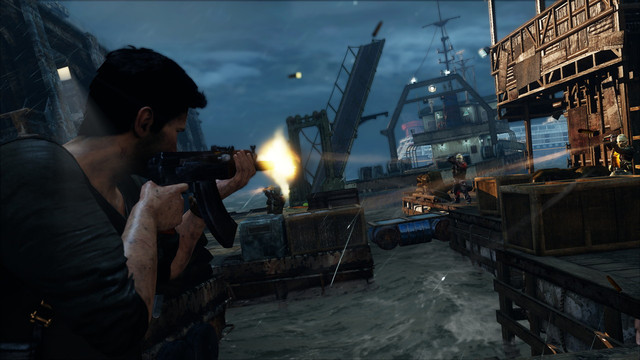 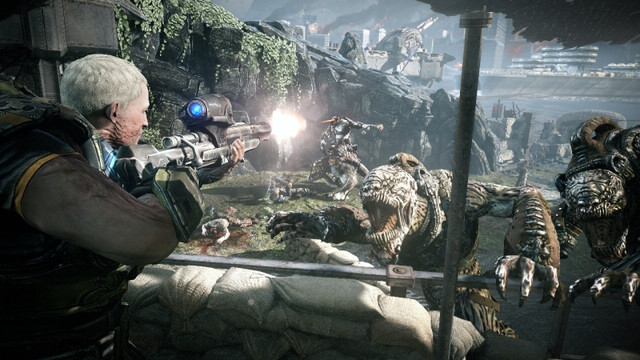 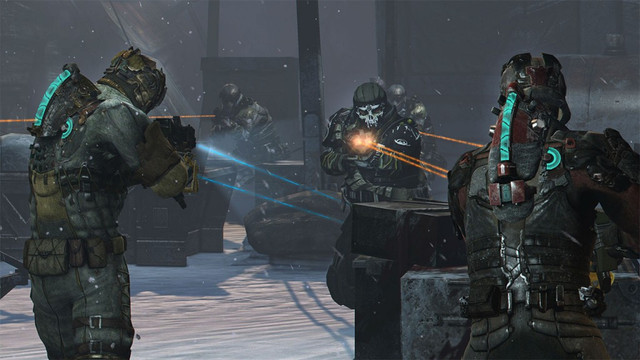 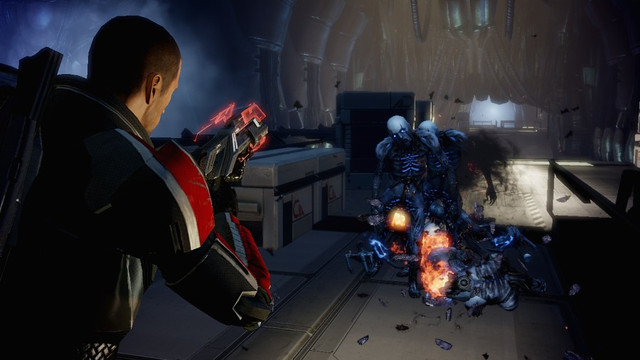 One is an action-heavy adventure-platformer. One is a multiplayer-centric shooter that doesn't skimp on single-player. One is survival horror. ONE IS AN RPG. I love these franchises, and I love how they've all brought new and exciting things to gaming this generation, but do you see my point? 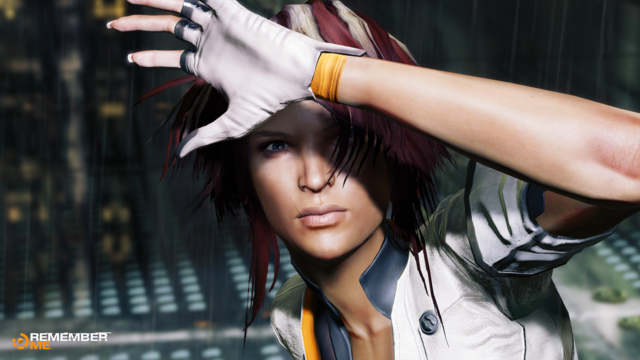 That's probably why I was so immediately taken with Remember Me, the Capcom-published actioner from French developer Dontnod Entertainment. Even under its familiar-seeming veneer, Remember Me breaks from the mold of modern gaming to deliver a sleek, stylish running fight through the utopian streets of 2084's Neo Paris. It also helps that you don't pick up a single firearm of any kind throughout the entire game. 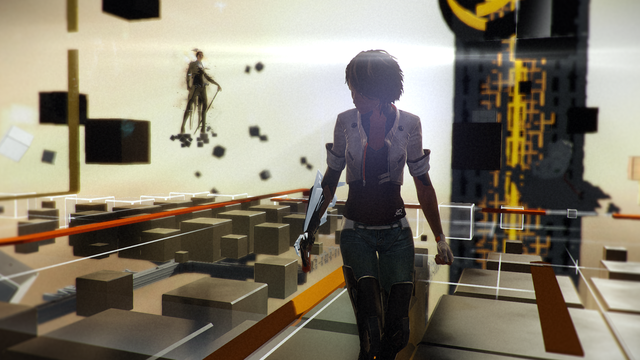 Remember Me follows Nilin, an elite Memory Hunter capable of stealing the thoughts right out of your head--or changing your memories to change you. In the year 2084, new technology called Sensen allows you to lock away bad memories digitally, keep good memories with perfect clarity, and even get completely new ones a la Total Recall. With few memories of her own, Nilin works together with Edge, the seemingly all-knowing leader of the Errorist resistance movement, to fight against Memorize, the inventors of Sensen who practically rule the world. While the plot borrows just enough from sci-fi classics, the world and style feel different enough to make Remember Me stand out. 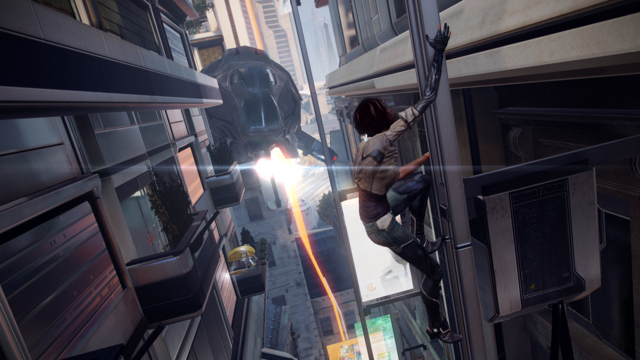 The bulk of gameplay is broken up between long stretches of platforming and puzzle-solving, a few scattered stealth segments, and regular combat. The platforming is solid, and doesn't fall into the trap that a lot of modern games use (for instance, in Uncharted, you're always climbing on yellow or blue ledges, or white ones in Tomb Raider) by just using a small arrow to point to the next grabbable ledge. With the amount of floating text for in-world elements like store signs or safety notices, a small floating arrow makes sense and doesn't feel out of place. While platforming controls just fine, it can feel rigid and a little slow, especially since Nilin herself is supposed to be very agile. I'm thirty years old, have a beer gut, and probably weigh twice what Nilin would--I should not be able to mantle waist-high objects faster than she does. 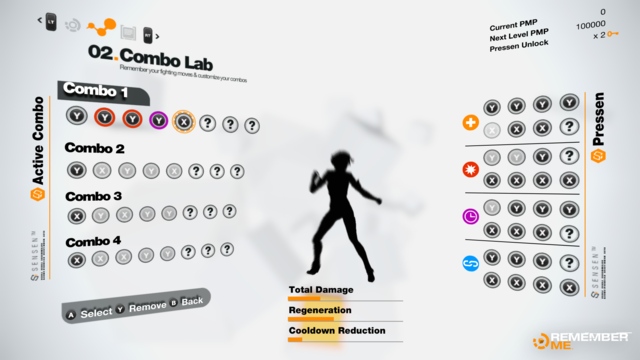 You will spend more time fighting crowds of security guards and mutated, memory-addicted "Leapers" than anything else in the game, but it's a good thing that Remember Me's combat is flexible, fun, and encourages actually learning your combos. Defeating enemies earns experience, which go toward unlockable "Pressens," your individual attacks. Broken up into Punches (X/Square) and Kicks (Y/Triangle), you can build combos in the Combo Lab's pre-set patterns, but you decide what each combo's effects will be. Are your combos built around dealing straight damage? Healing? Cutting cooldown times on your "S-Pressen" special abilities? Maybe a mix of all three? Combos of six hits or more earn extra experience, so it's always in your best interest to pour on a steady, perfectly-timed barrage of hits, rather than just mashing the attack buttons. 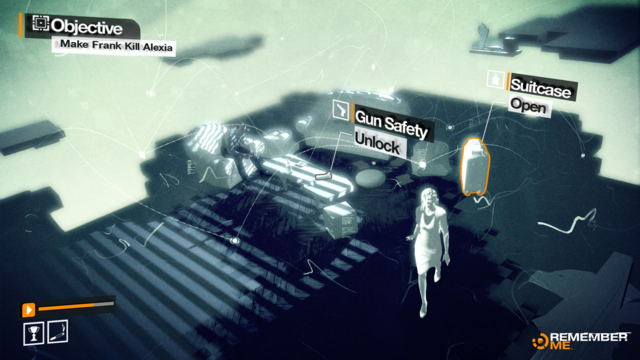 In addition to fighting typical boss battles, Remember Me changes things up with the Memory Remix segments, where you get to change the direction of the story by adjusting the memories of other characters. You'll watch a cutscene of a particular character's memory, then get the chance to rewind it and make changes to the scene. The first Remix is fairly straightforward and serves as something of a tutorial, but later Remixes feel more like a Phoenix Wright-style investigation, where paying attention to small details will help you solve them more thoroughly. That attention to detail is important--while you can interact with many elements of the Memory Remixes, you have to choose the right ones. Certain adjustments can make the scene go drastically wrong, and it's actually interesting to just play around during Memory Remixes to see what you can get away with. 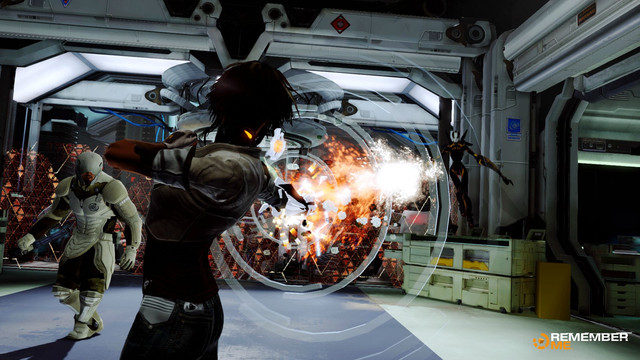 While Remember Me seems like a pretty linear action game, you're actually encouraged to wander off the beaten path. There are plenty of dead ends and empty rooms, but I think that's also in line with making you check every door and turn over every (proverbial) rock for health upgrades and Focus, which lets you pull off Nilin's "S-Pressen" specials, including large area-of-effect attacks, a virus that reprograms mechanical enemies, and a "Fury" move that temporarily allows simpler free-flowing combos like the Batman: Arkham games. Even with me poking around and checking most of each level for collectibles, I still finished the review copy in just over 15 hours--however, there is a New Game+ that lets you continue hunting for collectibles and finish levelling up your fighting skills. 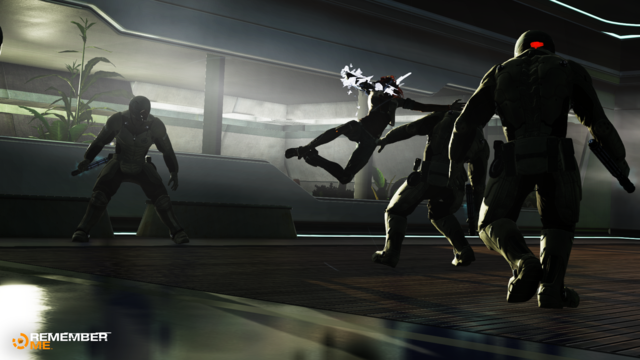 In fact, the only real complaint I have with Remember Me has to do with aesthetics, and stems from my almost-obsessive love of martial arts movies. The combo system is a total blast, and I love getting to basically choreograph my own combos. However, the combat feels too light, too floaty--when Nilin hits opponents, few attacks feel like they have any weight to them. I was basically expecting more Gina Carano (I'll even take Cynthia Rothrock) and less Carrie-Anne Moss. Also, with no grapples or counters, combat is solely about strikes and dodges, and has little variety. Sleeping Dogs channeled the brutality and desperation of a cinematic Hong Kong brawl, and the Arkham games had a huge variety of hilariously vicious combat animations spread across multiple characters. Remember Me just feels like a video game. 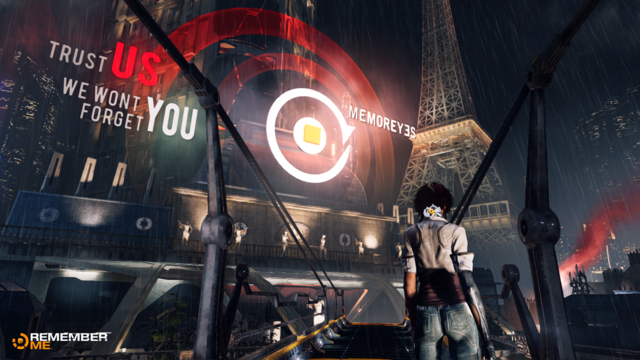 Being completely honest, that is a minor, personal gripe about an otherwise excellent game. Remember Me looks cool, plays great, and most importantly, plays differently. Like its story, its gameplay takes a lot of familiar elements, but put together they're something new and different and welcome. The action has depth, very rarely feels repetitive, and the difficulty ramps up nicely even on the "normal" setting. If you're stuck on a puzzle, lost, or getting your ass kicked in fights, the game offers "Aug Eye" hints and occasional solutions, but these are completely optional. Sequels and spin-offs sell millions, even when they don't change much between installments--sometimes, it's a good idea to let the newcomers have a shot, and Remember Me deserves your attention.

+ The story cribs from sci-fi favorites, but has interesting characters and a well-built world, even with some clunky dialogue

+ Instead of constant hand-holding, the game lets players learn on their own, with optional hints if you're really stuck

+ Puzzles are clever, often requiring you to decipher mnemonics in addition to standard "find and deliver key" fetch quests

+/- The Combo Lab lets you develop your own attack strings with plenty of flexibility and style, but I personally find the action to look nice while feeling weak--your mileage may vary

+/- Lots of upgrades and collectibles to hunt for, and you can continue levelling up in New Game+, but there's only one extra difficulty after the "normal" setting

- Platforming can feel stilted and slow, especially when you have to follow a freerunner or are being chased by a gunship

- Combat lacks the variety of other big-name titles focused on hand-to-hand and melee--no grapples, counters, or weapons