Jack in and celebrate the cyberpunk genre in this week's Fanart Friday! 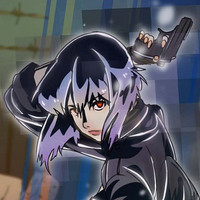 Fanart Friday returns, and it's always raining here. Well, not right this second, but soon--I'm just waiting for the typical rainy Monterey summer to start. The weather's been too nice this year. Last week, we explored the western genre from the American frontier to the final frontier, but this week we're entering the gritty, dystopian world of CYBERPUNK!

A staple genre of anime and manga, cyberpunk deals in the future not being a particularly nice place to live in. Basically "film noir in the future," cyberpunk tends to deal in themes of social unrest, drug (or entertainment) addiction, and technology (usually its abuse) almost always playing a huge part in contributing to the world's problems. Now, let's get started! 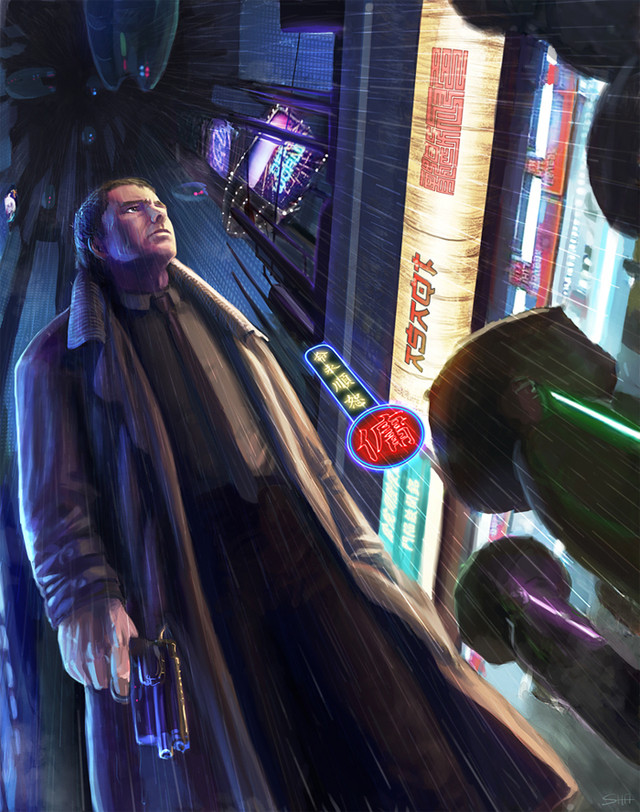 While there have been plenty of American-made cyberpunk movies, I think it's safe to say that Ridley Scott's Blade Runner--a loose adaptation of Philip K. Dick's Do Androids Dream of Electric Sheep?--defines a lot of what we identify as "cyberpunk." Gritty storytelling, a dark and dreary city where it always seems to be night (or raining... at night), and real moral ambiguity all make Blade Runner the go-to cyberpunk film, and many fans' introduction to the genre. 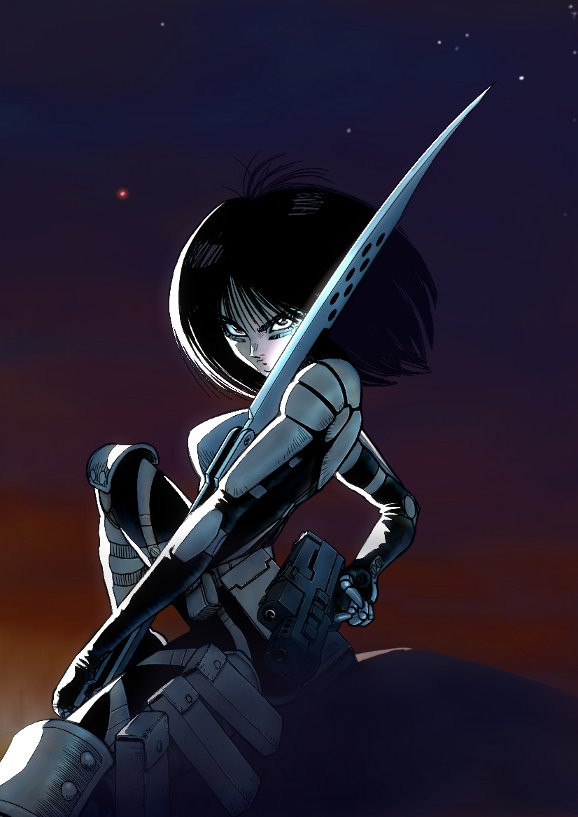 My introduction to cyberpunk, however, was not Blade Runner, as I wasn't allowed to watch R-rated movies as a kid. Strangely, I was allowed to read insanely violent comics and manga, like Gunnm, which was released as Battle Angel Alita here in the US. We only got the one OAV almost twenty years ago--I want more Gunnm anime! 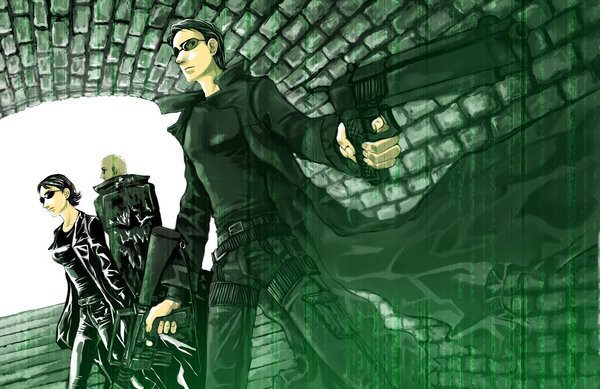 Unlike a lot of modern trailers, the original trailer for The Matrix left a lot of surprises for the viewer, including the crazy, game-changing cyberpunk twist like a third of the way into the movie. "No one can tell you what the Matrix is," indeed. It was pretty awesome going to a movie with a sense of wonder, not knowing exactly what it had in store. 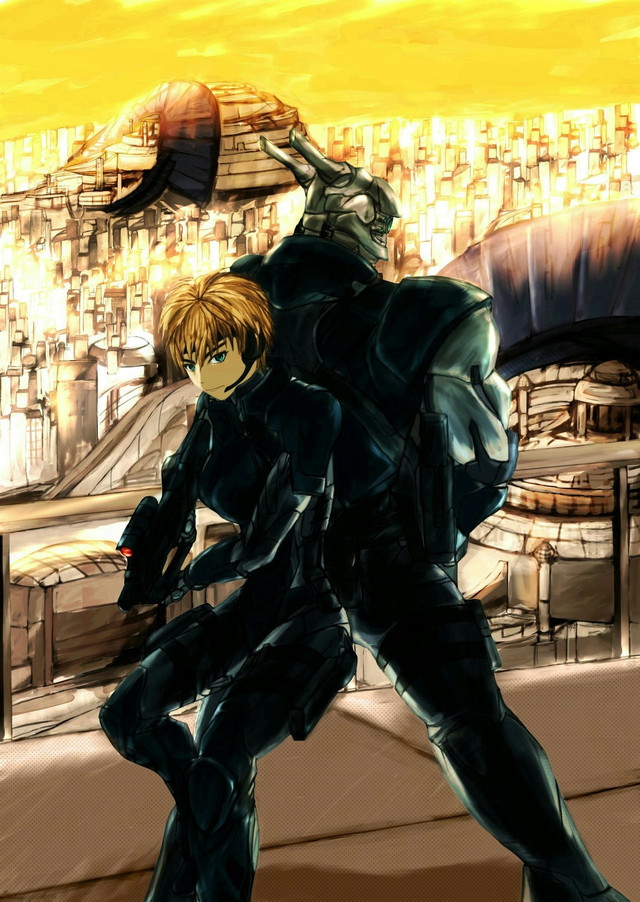 Appleseed will always be my favorite Masamune Shirow series--I remember buying the individual issues when Studio Proteus had the license. Deunan Knute and her gigantic cyborg boyfriend Briareos are brought from the war-torn ruins of "the rest of the Earth" to the utopian Olympus. Beneath Olympus' perfect exterior, Deunan and Briareos find out that a city at peace can sometimes be more violent and savage than a world at war. 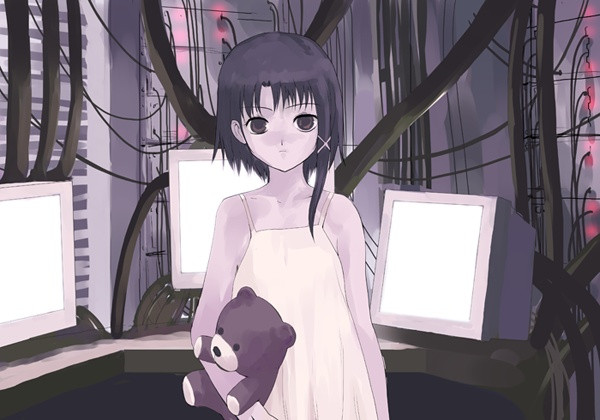 Cyberpunk doesn't always deal in fierce action and dreary metropolitan settings that are two steps shy of the apocalypse. Serial Experiments Lain told a quieter--but no less intense--story about the dangers present in modern communication and the acquisition of knowledge. 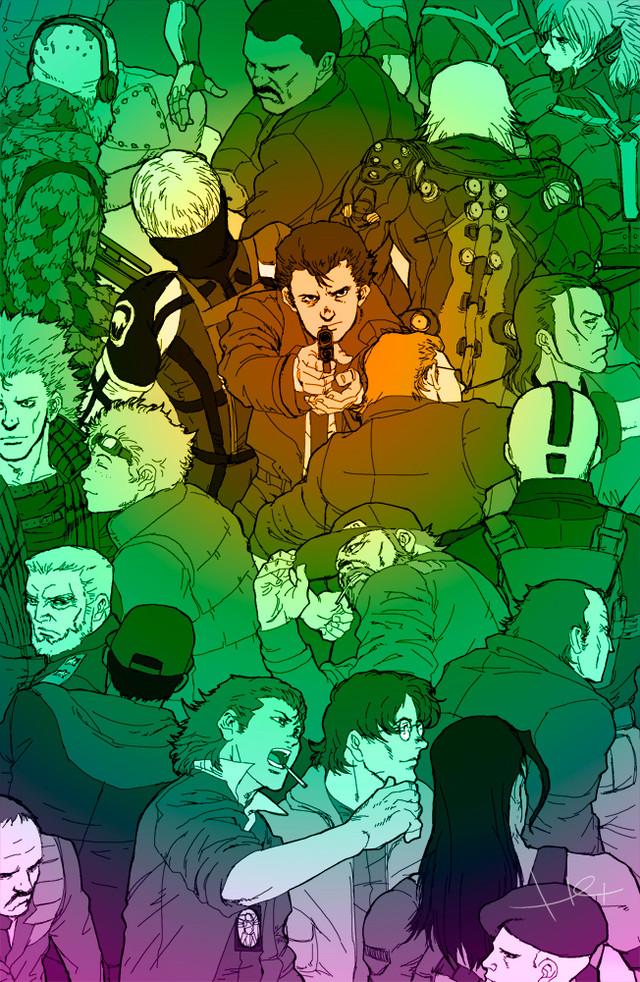 All of Hideo Kojima's games have a touch of cyberpunk, even the '60s-styled Metal Gear Solid 3. The one that fits the bill the most, though? Snatcher, a dark Sega CD adventure game that liberally borrowed from Blade Runner, The Terminator, and other sci-fi and cyberpunk classics. In this awesome ensemble piece, you'll see Snatcher's Gillian Seed taking aim, but sadly his Metal Gear is nowhere to be found. 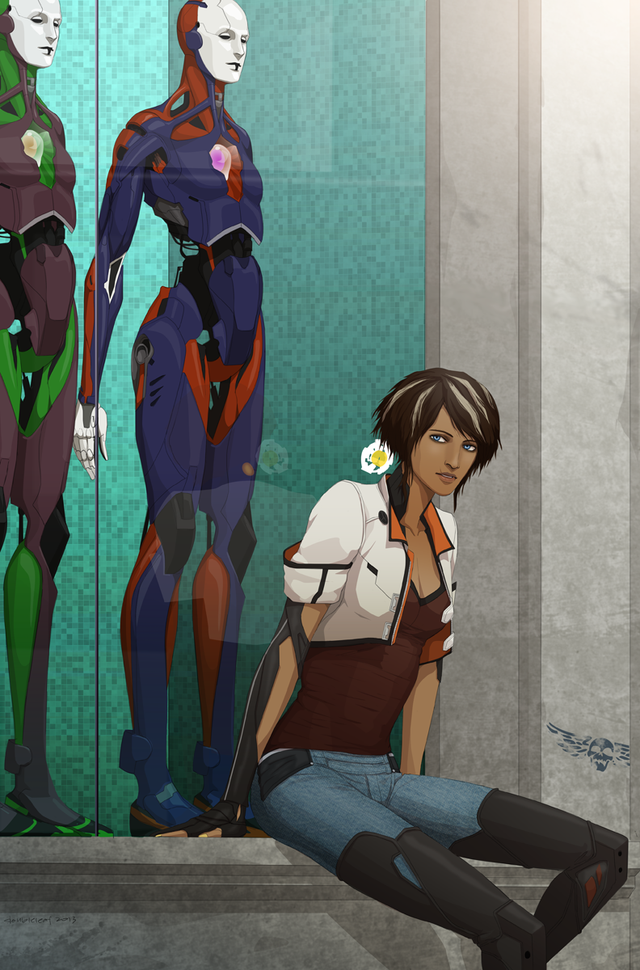 All the haters can go sit and spin, because I loved Remember Me. Completely understandable functionality and pacing gripes aside, it was refreshing to see a game with this much artistry being pushed as a AAA title. 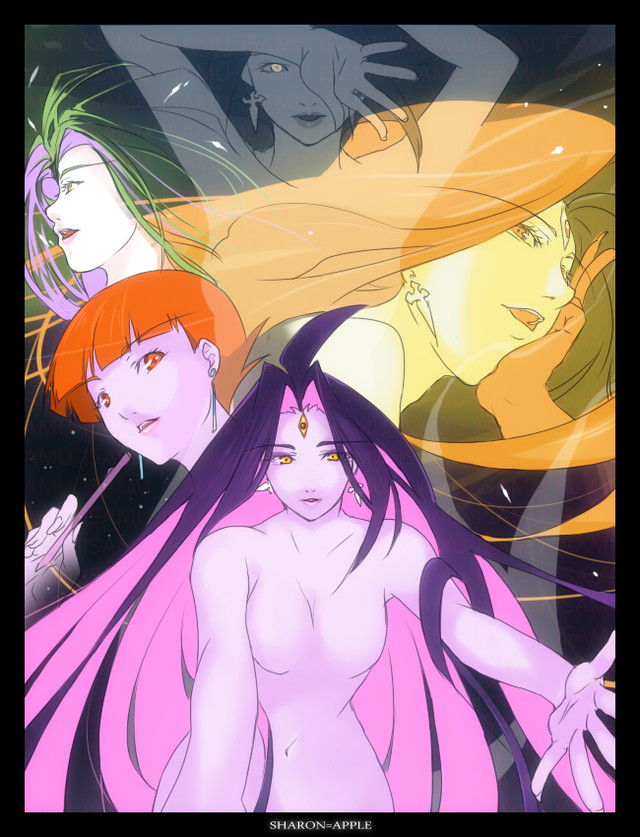 As a series, Macross stays pretty firmly on the "straight sci-fi" side of the genre. However, Macross Plus (one of my favorite anime of all time) dives pretty deep into the cyberpunk pool, with psycho Vocaloid-alike Sharon Apple showing off the dangers of rapidly-advancing technology, and what happens when some maniac falls in love with his too-lifelike computer program... and when she starts falling in love, too. Scary stuff, with some amazing action!

Okay, so it's kinda hard to see Robocop without his famous helmet, but rest assured, that is him, and this piece is amazing--check it out at full resolution and marvel at the detail the artist put into it. While I love the first movie (and never object to watching the other two), it's always kinda weird seeing the dad from That '70s Show as a hardened killer. 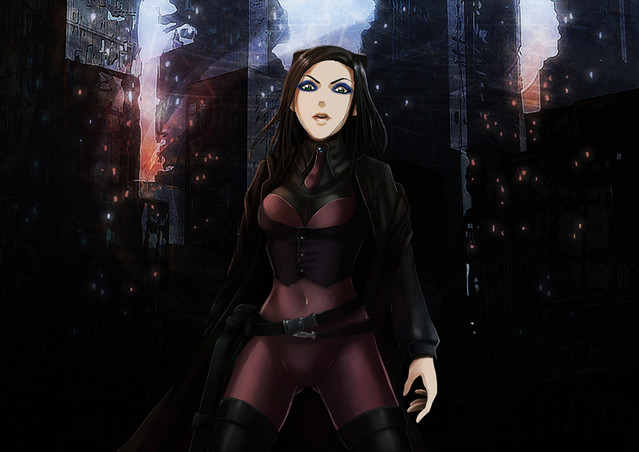 Ergo Proxy is one of those titles where if I explain too much, I'm gonna end up accidentally giving away important plot points. Without giving away too much, it's a pretty cool (and very heavy) sci-fi/cyberpunk story that skillfully splits the focus between investigative cunning and intense action. 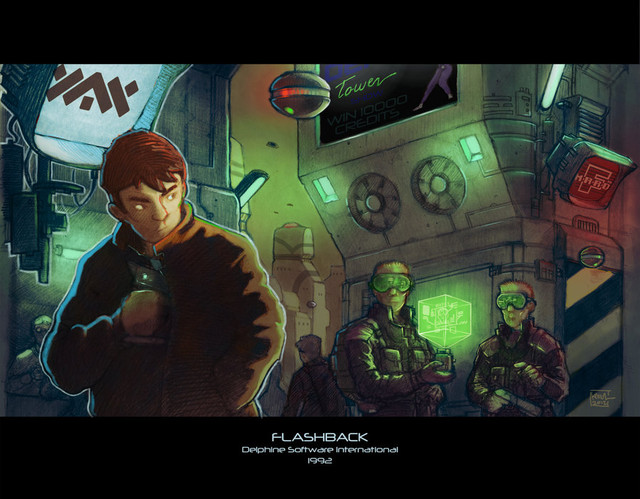 Flashback: The Quest for Identity takes you from a freakish alien jungle to crazy postmodern cities teeming with guards--cyberpunk heaven! Have I mentioned that I'm really looking forward to the upcoming remake? 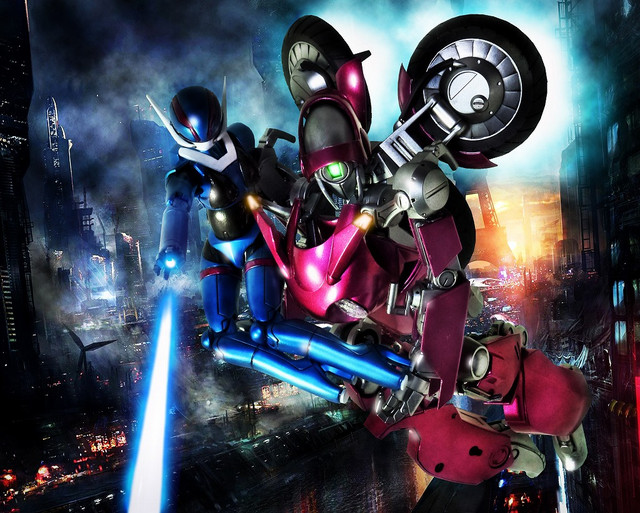 Back in ye olden days of the American anime market, Bubblegum Crisis was a pretty hard sell to teenage me, solely because of the title. It's always nice to find out you've misjudged something, especially because BGC kicks an ungodly amount of ass. 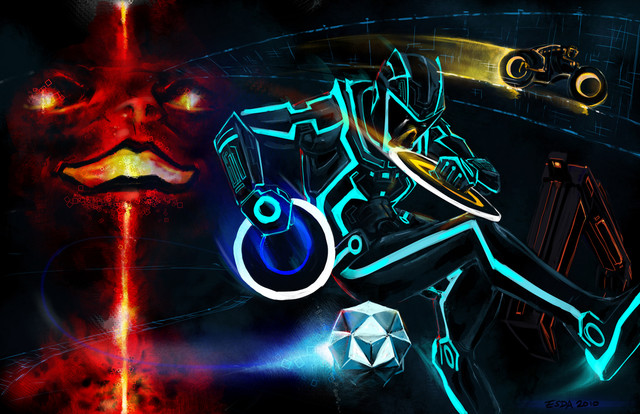 I didn't see Tron: Legacy in theaters, but I wish I did--the colors, the style, the Daft Punk soundtrack--it really lives in the "cyber" part of cyberpunk, with all the standard style and tropes taking place inside a computer. The original was more straight sci-fi, but Legacy and the Uprising series take a more distinctly cyberpunk tack. 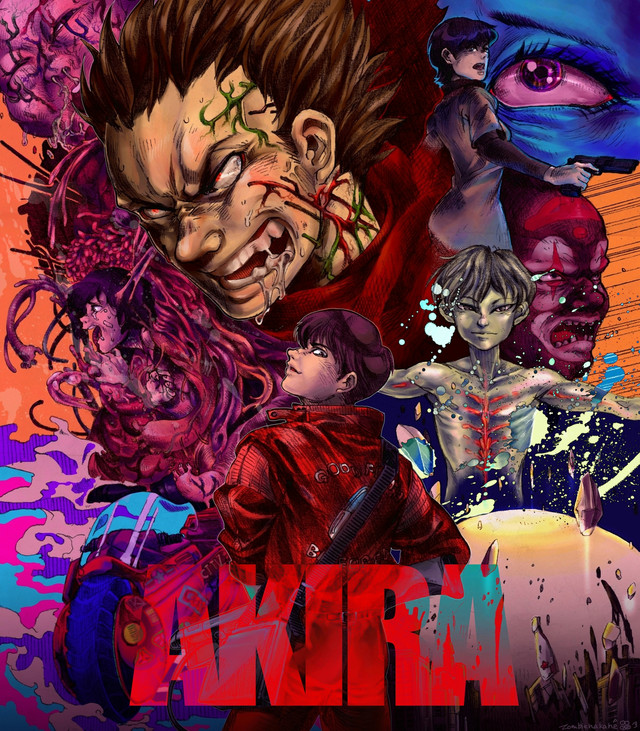 Y'know what would be great? If somebody retold Akira like that goofy Adult Swim Inuyasha commercial--you know the one--that was just "TETSUO!" "KANEDA!" repeated over and over and--oh, hey. Check that out! 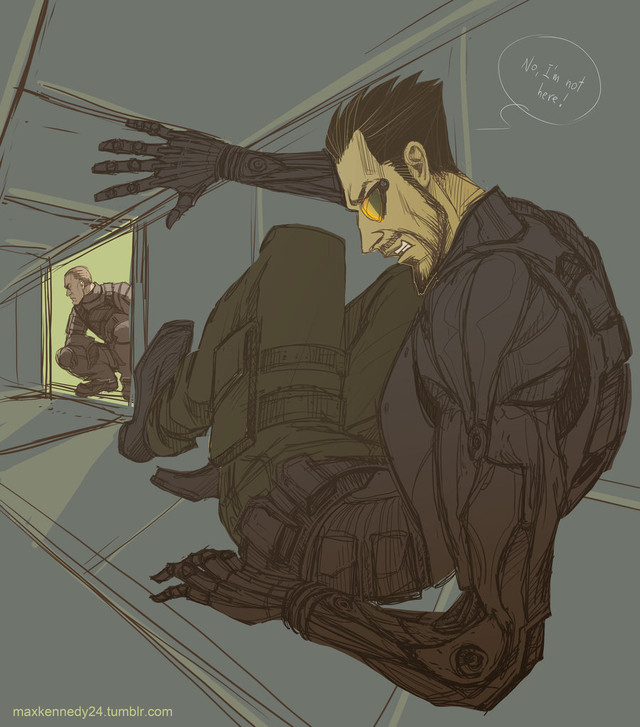 This does not sum up my experience with Deus Ex: Human Revolution at all. Sure, I snuck around when I had to, but I put all my XP into strength--you don't have to worry about funky cover mechanics and tense shootouts when you're throwing refrigerators across the room. Sorry folks, my gritty noir detective is more John Matrix, less Philip Marlowe. 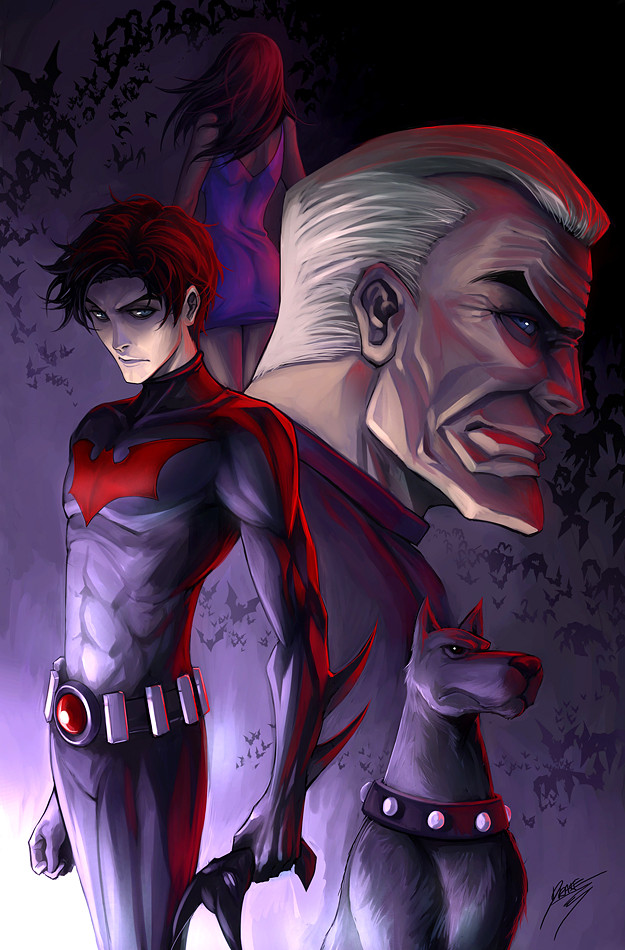 I'm not that surprised that future Gotham City is a cyberpunk hellhole in Batman Beyond--Metropolis has always seemed like a fairly nice place to live (minus the occasional alien invasion or metahuman brawl), but Gotham, well... it's always been the wrong side of the tracks. I know, I know, let's not talk about Bludhaven. 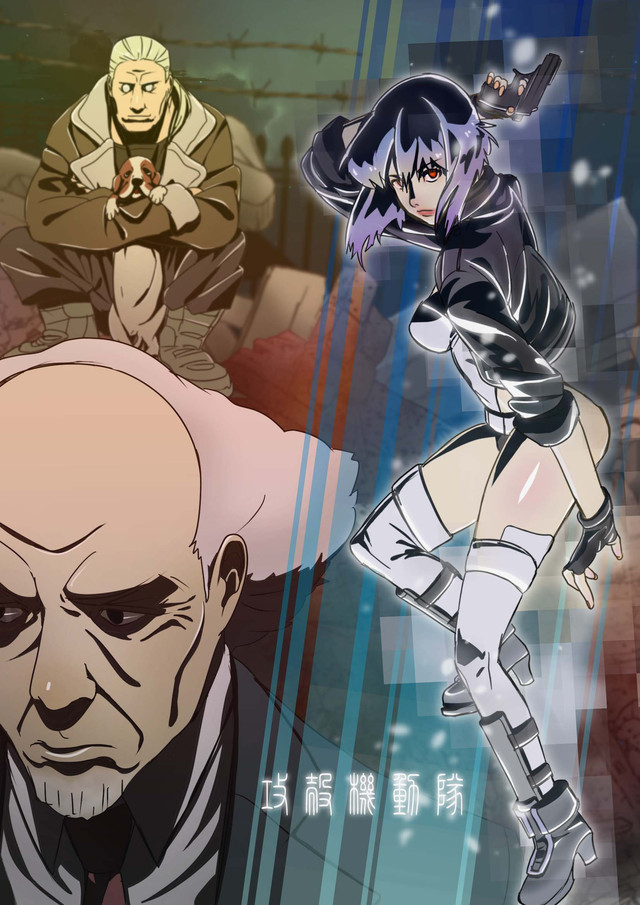 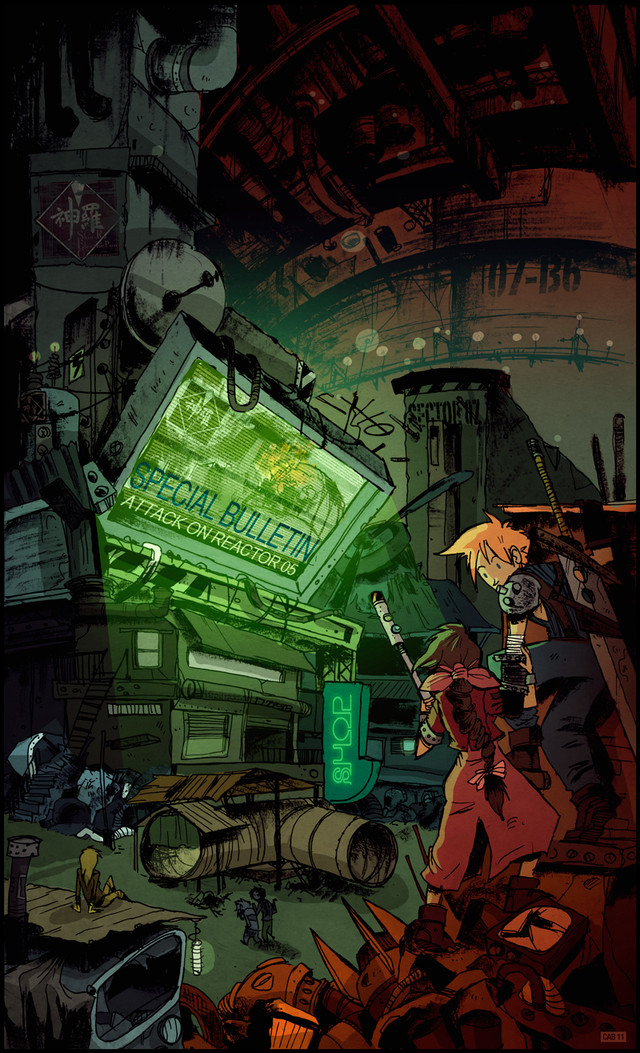 Two weeks ago, I talked about how Final Fantasy liberally uses steampunk elements in a lot of its games. Strangely, there's only been one game that dips into the cyberpunk well--Final Fantasy VII! The city of Midgar is a straight-up awful place to live, ruled by a megalomaniacal corporation that rules through fear and intimidation. Sound familiar? 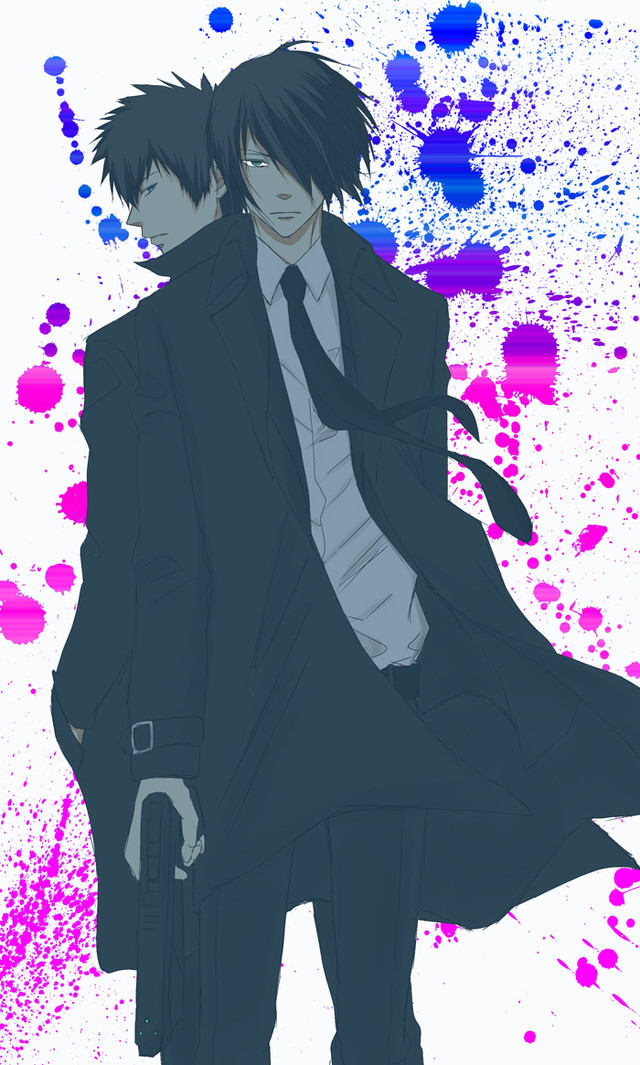 Oh look, there's that other cyberpunk police procedural! Psycho-Pass was a really cool series that brought me back to when I started watching anime. Gritty atmosphere, a multi-layered story, and jaw-dropping violence are just the icing on a very delicious, beautifully-animated cake anime. 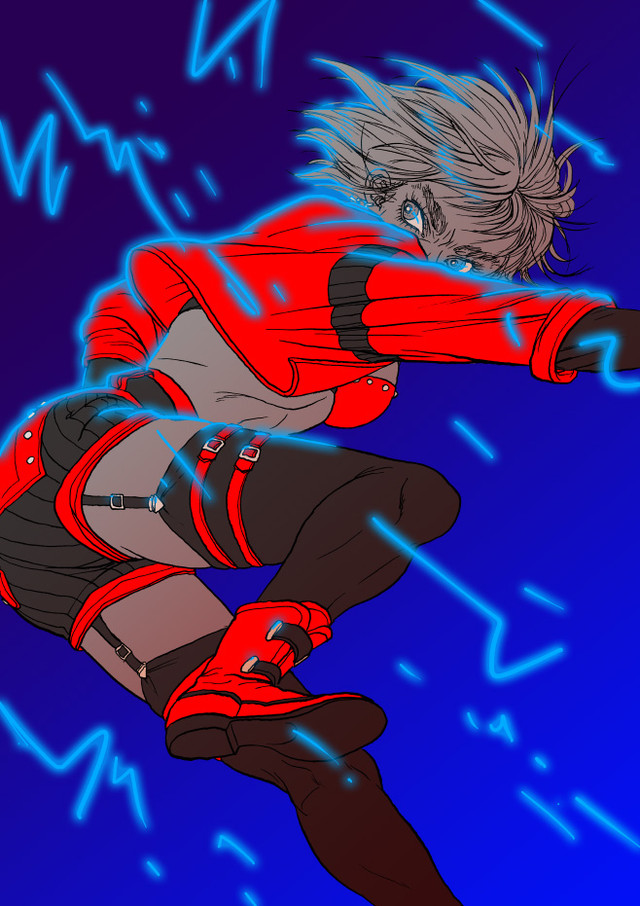 I know it's important and all, but I never quite saw what all the fuss was about for Armitage III. There were some movies or OAVs or something, and I kept seeing the titular Naomi Armitage all over the place in the pages of Animerica and Protoculture Addicts, but it just didn't hook me like Akira or Appleseed, and I'm not really sure why. 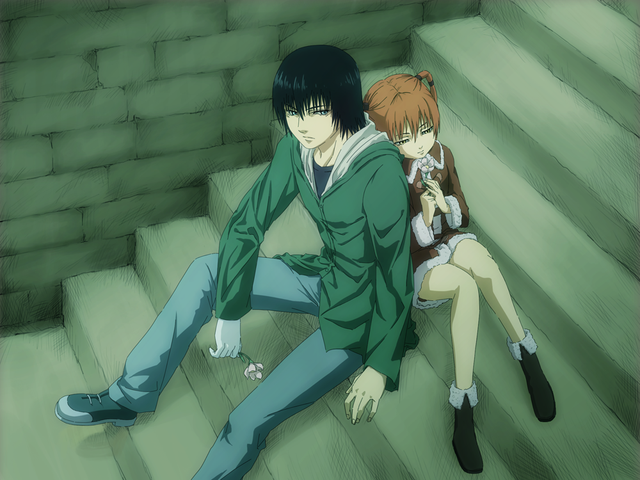 Somehow, I missed Texhnolyze when it was coming out, but reading about it on Wikipedia, this is totally up my alley. Don't let the serenity of this piece fool you--Texhnolyze sounds like a ruthless and unforgiving story that'll probably leave me drained at the end. 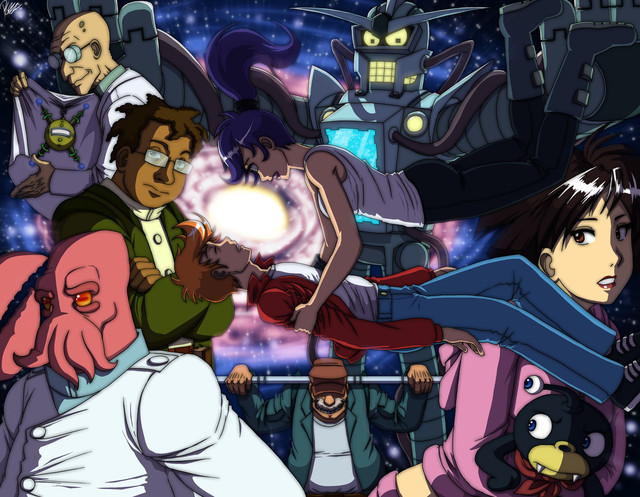 Don't let the bright animation and sharp comedy of Futurama tell you otherwise--it's actually a very dystopian sci-fi story that takes place in a distinctly cyberpunk future. Suicide booths, impersonal tube transport, crowding and overpopulation... and then just think about the episode about Leela's past, and the sewers, and... yeah. Futurama is stealth cyberpunk.

And that wraps up this week! There's no way I could have included everything--what are your favorite cyberpunk anime, manga, movies, and games?

Like I say every week, your work is always welcome here on Fanart Friday, regardless of your experience or skill level. Since it takes time to do work you're proud of, here are the next three installments of Fanart Friday:

-Next week, on JULY 26th, we're poking through the NOIR theme! Shady private eyes, femmes fatales, and double-crosses you should've seen coming are all part of the game! THIS IS THE ONLY THEME I'M TAKING REQUESTS FOR THIS WEEK!

-We start August with an old favorite--on AUGUST 2nd, we're fixing our hair, standing up straight and speaking in a deeper, sexier voice for the return of BRICK HOUSE EDITION! Don't worry, a revisit to Total Studmuffin Edition isn't too far away!

-On AUGUST 9th, we're gathering clues and calling witnesses out on the holes in their story with our favorite DETECTIVES! While detectives are an important part of noir stories, not every detective story fits into the noir category!

Thanks again for coming by to check out Fanart Friday--have a great weekend, and we hope you drop by next week, too!