The godfather of first-person stealth makes a promising return 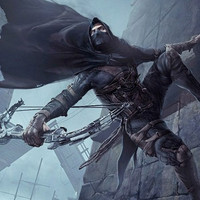 Last week, I was lucky enough to try out the upcoming reboot to Thief, developed by Eidos Montreal (Deus Ex: Human Revolution). Now, Thief doesn't come out until February of next year, so this was a very early build--we played the roughly 1.5 to 2-hour demo on high-end PCs with Xbox 360 controllers.

Before we actually got a chance to play, all us game journalists gathered 'round for a story, told by Narrative Director Steven Gallagher in his Scottish brogue. As the lights dim, he tells us about Garrett, the master thief, who takes the street-smart Erin under his wing and trains her. But no matter how fast a learner she is, Erin always ignores one of Garrett's core beliefs: that killing--to steal a life--is an absolute last resort, and should not be taken lightly. Eventually, Garrett grows tired of Erin's cavalier attitude and splits ways with her. 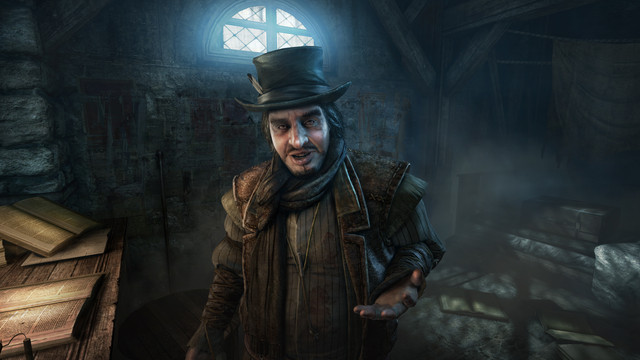 Time passes, and one day Garrett's fence suggests that master and student work together on a huge job--stealing from the local Baron's estate. Hoping that Erin has matured, Garrett reluctantly agrees to the job--it's just one job, right? Unfortunately, Erin hasn't grown, and has in fact become worse! She jeopardizes the mission by killing needlessly yet again. As the situation gets worse and worse, Garrett loses consciousness during the chaos, and when he wakes up, a whole year has passed.

The nameless City is a different, darker place, gripped by a plage known as the Gloom. The Baron rules over the City with an iron fist. The rich are richer than ever, and the poorer districts are overrun by the Gloom, with the Baron's stormtroopers brutally enforcing order. It's here that the demo begins, in Garrett's clock tower hideout, with his personal collection of stolen items that he feels are too valuable to just sell for coin. 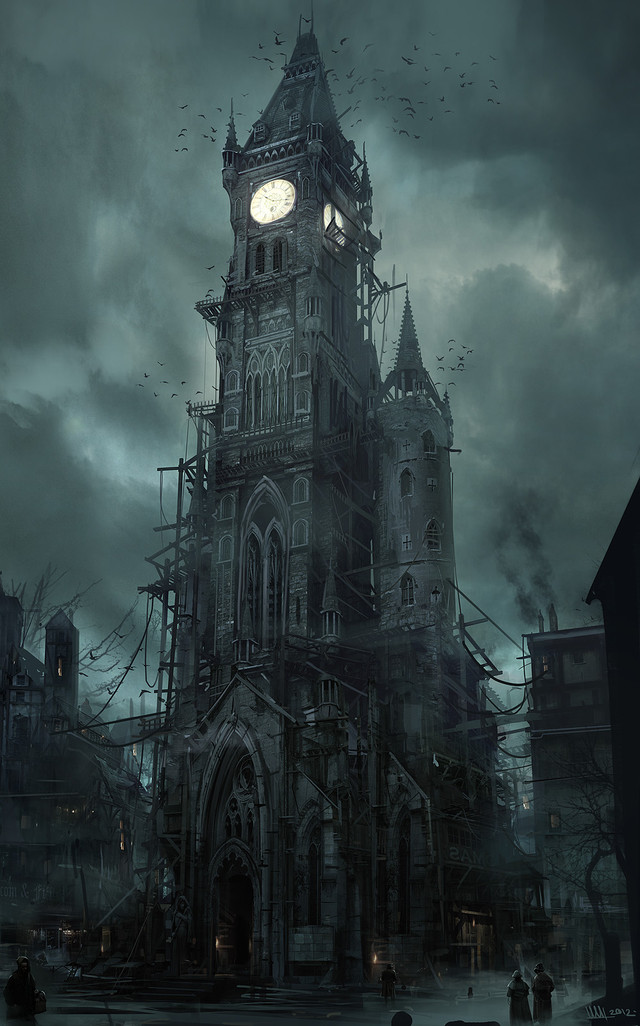 From that intro and jumping right into the gameplay, I was immediately immersed in Thief's world. Controls were smooth and familiar, and it was nice poking around Garrett's hideout and studying the objects inside. Thief's HUD is simple and out of the way, tucked in the bottom right and left corners. Key to the gameplay is the Light Gem, a glowing circle in the corner that shows how hidden you are--it glows brightly when you're plainly visible, and pitch-black when you're hidden in darkness. The d-pad brings up your objectives, a mini-map, and a radial menu to switch between Garrett's different types of arrows, along with Health and Focus consumables--yep, there's no regenerating health in Thief!

Focus is similar to a lot of "vision modes" that I complain about in modern games, but it feels less intrusive and hand-holdy. It only highlights points of interest, doors and windows you can open, and ledges that you can hook your claw onto. Focus could also be used in combat, slowing down enemy movement, and to help speed up stealth necessities like lockpicking or snatching moving guards' wallets. Focus also doesn't open every pathway--you can buy tools for Garrett, like a wire cutter or a ratchet, which can open new paths, disable certain anti-burglary devices (if you can find their control panels), and make off with certain treasures, like monument dedication plaques. 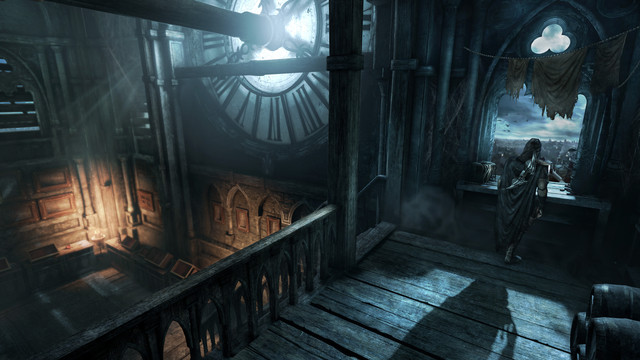 In the demo, the City is in lockdown, with few civilians roaming the streets. I've been told that as the game continues and certain objectives are met, the City will become more crowded, and you'll have to worry about more people seeing you, or possibly reporting your presence. In the build I played, homeless people didn't have their AI installed, so you could stand right in front of them, pick fights with guards, or light them on fire and nothing would happen. However, there were so many homeless characters in the level that it makes me wonder which ones will ignore you, and which ones will go screaming to the guards if you drop in front of them.

It might seem strange to you, but the first thing I did in the demo was get a feel for Garrett's limits--I jumped off a second-story ledge to see how the game handled fall damage (I died immediately), then walked right up to a guard and let him kill me to see how tough Garrett was in combat (four hits). I was pretty happy to see that Garrett was a realistic, somewhat fragile thief instead of a tank, which changed my approach for the rest of the demo.

While I was encouraged to head to a tavern and speak with Garrett's fence, I spent a lot of time poking around in various open windows, looking for what the game defines as Opportunities. In some houses you'll find a variety of treasures, documents that reveal more of the game's lore, and can sometimes overhear characters in other rooms. I found it was a good idea to pay attention to the documents and incidental dialogue, which would sometimes reveal the locations of even more loot, or point out where anti-burglary traps were located. I also found that just about every area in the demo was somehow reachable--if you can see it, you can get to it, and many treasures in houses were hidden in out-of-the-way places, like atop tall dressers or hidden behind large paintings. 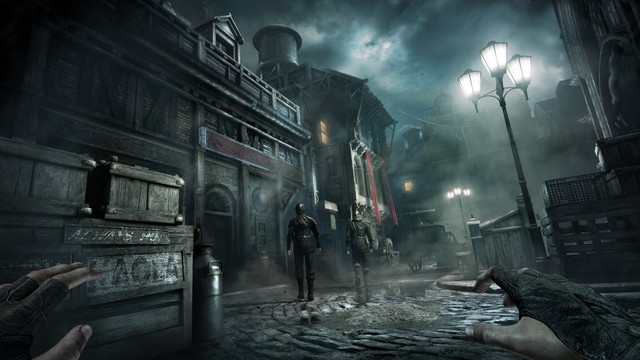 Something I found myself using a lot was Garrett's Swoop move, which could be used to close distance to a target, or quickly pull myself back to a wall. Garrett could even use it in combat--while there's a dedicated dodge button that flanked enemies if you had good timing, judicious use of the Swoop could make you leap from one target to another. Ideally, you shouldn't even be fighting guards in this game, but for those rare moments when you're cornered (or if you suck at stealth games like me), the combat is fast and brutal and severely punishes mistakes. Basically, if you're bad at stealth, I hope you enjoy getting ganged on by guards, who will always call for help.

This sums up my experience fighting four guards in Thief

The demo was a total blast, and I spent more time dicking around with guards than I should have (it's fun putting out the lights with water arrows and watching them freak out), but the four in-game Jobs had plenty of variety and could be resolved with a number of different approaches. Walk up and beat down all the guards? Snipe them all with arrows? Steal past them by parkour-ing across the rooftops, and drop in through a back window? Thief's flexible gameplay seems to let everybody enjoy the City at their pace and in their own style, and it was nice not to be forcibly pigeonholed into one playstyle. Unfortunately, with this being a very early build, some platforming and collision was slippery, and every now and then the game would crash for what seemed to be no reason at all. I'm assuming a lot of these problems will be ironed out by the time the game actually launches.

A great emphasis on stealth and exploration, brutal combat, and a rich world make Thief one to watch out for. I'll be following this game through its development, and of course we'll keep you posted with new trailers and info as they become available! Be sure to drop by later on today, as I'll be posting an interview with Thief's Senior Producer Stephane Roy and Narrative Director Steven Gallagher! From what you've seen so far, what do you think of the new Thief?