A furious, fabulous, and fun (yet flawed) fight to the finish 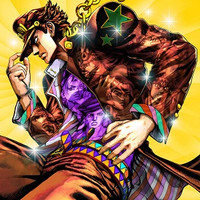 With JoJo's Bizarre Adventure's anime now available on Crunchyroll, the timing was perfect for CyberConnect2's jaw-dropping brawler JoJo's Bizarre Adventure: All-Star Battle to make its way across the Pacific to North America, Europe, and Australia! This time, I was joined by my usual cohort Baker McDonald, as well as die-hard JJBA fanatic Danika Harrod for another co-op review! Let's get started!

NATE MING: Okay, so! Same as always, we start with introductions. The readers know me, more or less, and they already know Baker (who recently did his first solo review!), so Danika, who are you?

DANIKA HARROD: YO! I'm Danika, AKA DarlingDaniChan! I'm the Manga Brand Manager for Crunchyroll and all-around funny girl. I sing, cosplay, and love video games--beat-'em-ups are my fave.

N: And how familiar are both of you guys with JoJo? I mean, I know it's one of our hot titles right now, with Stardust Crusaders getting all kinds of people into it, but are you guys JoJo neophytes, or longtime fans... do you have Dio shrines in your houses...?

BAKER McDONALD: NO. Dio is a jerk.

D: If I had a JoJo shrine in my house, it'd definitely be a Dio shrine. I know Baker hates his guts, but I can't get over my obsession with how awesome and downright evil he is. 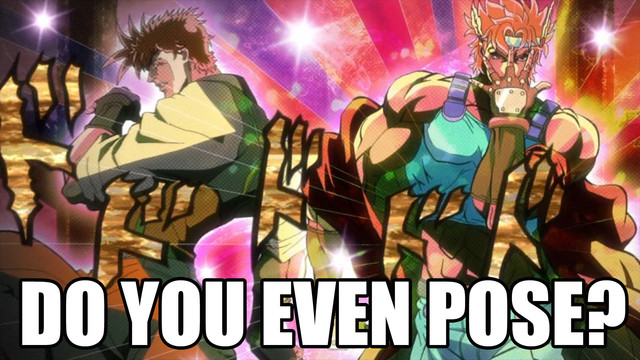 This has been my office experience for the last few weeks

D: I try to keep up with the manga, but there is so much. I'm rewatching the anime from the beginning on Crunchyroll and I love, love, love it. I'm pretty familiar with the most current part of the manga because I cosplayed as Daiya Higashikata.

N: As for me, I'm a huge JoJo fan, I've been one since I first found out about the series when I lived in Okinawa (while Part Three was running in JUMP, too). Part Two: Battle Tendency is my favorite part of the series, and Joseph is the best JoJo.

N: So there was this game that was re-released a little while ago--the Capcom-produced Stardust Crusaders game--and there was one on the PS2, as well. We really just don't get many JoJo games here, but this is a great place to start. I mean, it's not even really a fighting game. 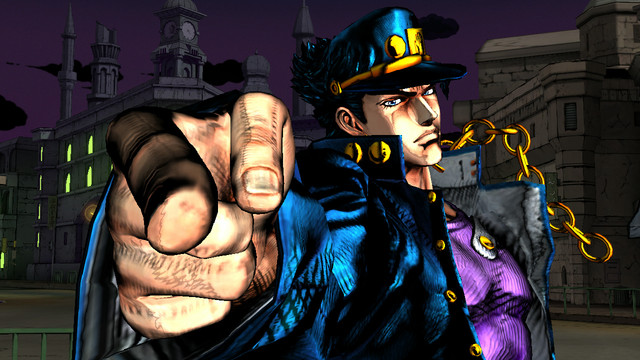 "I want you to stop watching shows about little sisters, because that shit's gross."

B: Same. But yes, it's frickin' gorgeous!

N: CyberConnect2 wanted to make a JoJo game, not a fighting game--

N: Yeah, exactly. It gives you the look and feel of playing and fighting in the JoJo world.

D: It looks like the manga came to life. I watch the game intro every time I turn it on, too.

B: Yup! It's really amazing how aesthetically you can tell it's by the same developers, but then you get totally blown away by how... JoJo it is.

N: With a gigantic cast, too. Aside from Part Eight: JoJolion, there's at least 3-4 characters from each arc... but there were some weird omissions. Like, Hol Horse--I know he's super popular in Japan, but they have him of all people, and not Lisa Lisa? 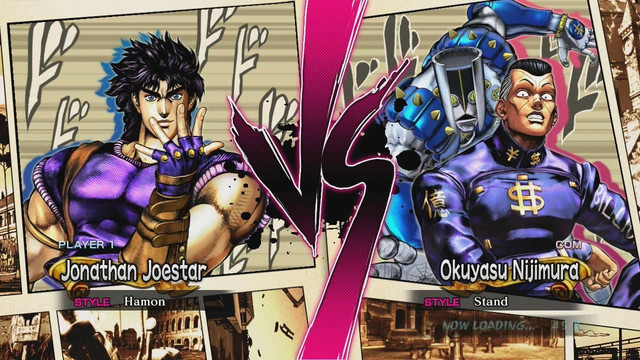 D: You'd think as much as they talk about Lisa Lisa in Part Two, she'd be an unlockable character. I was bummed about that!

N: I felt like Story Mode was kind of the centerpiece of the whole game. It felt like what they wanted you to focus on and enjoy the most, but the matches got kind of repetitive--you have to fight Wham Wamuu three times, like one after another, and then you have to do the same with DIO, and Kira... and then other Story Mode matches, like Part Six, are just like two fights and a lot of text.

D: Really? I felt like the Campaign Mode was the core focus. But then again, I haven't been able to beat DIO in Campaign, so maybe I'm way off.

B: I didn't even make it into Story Mode! Both of my roommates are bigger JoJo fans than I am, so we just spent the entire time fighting (mostly me getting my ass kicked)!

D: Wow, get in there, Story Mode rocks.

N: I like the challenges that Campaign Mode presents, and all the different ways to earn more money for customizing your characters.

B: Oh, speaking of money! Viewers at home, download the JoJo's Bizarre Adventure: All-Star Battle demo first. If you have a saved file from the demo, you get 100,000 gold when you start the full version!

N: Then there's Arcade Mode, which is a US/Europe/Australia exclusive that's exactly what it sounds like. It's a cool addition, and it occasionally changes to Harvest Mode so you can earn ridiculous amounts of money. Now, we'll actually talk about the combat system in a minute, but I think the game does a pretty crappy job of actually explaining itself to you, because it has some pretty varied mechanics depending on the characters.

D: Agreed. There were a few random obstacles that I kind of just walked into without having any clue what they were or what would happen.

N: Steel Ball Run characters will get these pickups on the ground when they fight--

B: Like the horse weiners that show up on the ground occasionally... 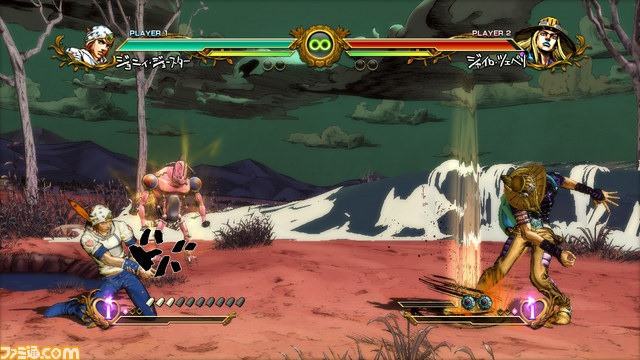 Of course Bandai Namco's official screens don't show any horse weiners, but Famitsu's do! Note the little glowy thing next to Gyro on the right

D: MY EYES. HELP. But really, they're gold body parts?

B: Weiners are body parts.

N: So yeah, there's these horse weiners on the ground (they're not really horse weiners, they're body parts--not weiners--that the characters are searching for in Steel Ball Run) that you pick up to get stronger.

D: Yeah, but when you just start out playing, you step into this object in a red ring, not knowing it's going to activate the horse weiner. And the fight starts like literally one step away from it.

N: Yeah, and that's just the tip of the weiner--er, sorry, iceberg. Hamon characters can charge their energy like an old-school KoF character, Stand fighters can swap movesets when their Stand is active, and Vampirism and Mode characters have unique abilities that don't really fall into either of the other categories.

D: Hamon characters are my favorite, to be honest--

N: And Mounted characters can fight on horseback, and grab horse weiners.

B: I wish they explained all of this better.

N: Yeah, it's very learn-as-you-go, which is frustrating for such an otherwise casual-friendly game. 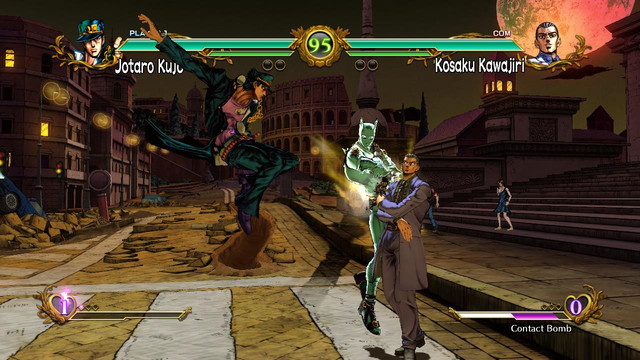 D: I'm still getting the hang of Stand characters. My favorite is Bruno so far.

B: I've spent the majority of my time fighting as Joseph.

D: Okay, so... Jonathan is my favorite Hamon character. But Joseph's walk... hi. I'll play as him just to see that. Jotaro's hip-pose is the ultimate, though. Okay, I'm done fangirling.

N: Now, the thing is, this game is kinda absolutely broken as shit, even after a few balancing updates. There are still infinites all over the place, and some characters are clearly way more powerful than you would ever expect.

N: But I dunno... this being a JoJo game, it kinda... makes sense? Like, it's bad in a competitive sense, but in terms of getting the feel of the series, it works. JoJo fights are always these crazy lightning-fast chess matches where landing one lethal hit wins the battle. So as a fighting game--yeah, broken. As a JoJo game, though? Spot-on.

D: I love how OP certain characters are, it actually fits.

B: The imbalance actually made it a little more fun for me. I'm notoriously bad at fighting games--a quintessential button-masher. But it really felt like I had more of a chance against my roommates. 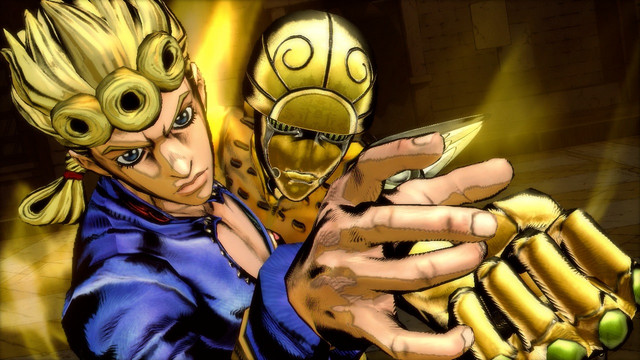 N: Did you guys get a chance to play online? My experience was overall pretty good, taking on Japanese and US players.

D: Yep! I played with random people and friends on PSN.

B: Unfortunately no, my roommates just wanted to keep kicking my ass. I think they're trying to say something.

D: I ran into a little bit of lag, not on my end. But I would see people just stand there punching from time to time? Overall, though, the online functionality was awesome, and connecting to my friends was easy. 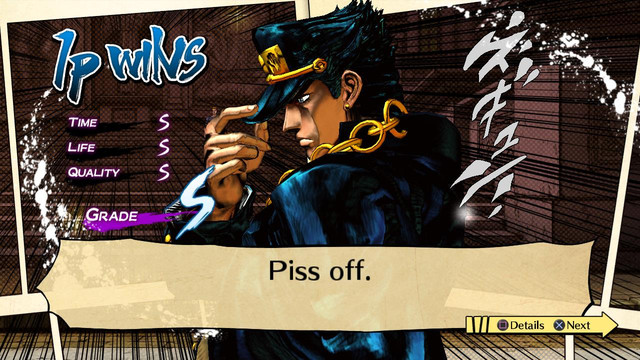 N: All right, so... final opinions on All-Star Battle? I think that JoJo's Bizarre Adventure fans have been waiting for a game like this, and it won't disappoint in the least. It's a gorgeous game that really gives the feel of the series unlike any other, but it kind of lacks meat. There's a lot of single-player content and collectibles to grab, but the oversimplified gameplay will quickly lose its luster for more serious fighting game fans. Overall, it's still something worth experiencing, especially if you're a hardcore JoJo fan.

B: I'm generally not very into fighting games. I think the biggest exception prior to JJBA: ABS was NUNS (Naruto Ultimate Ninja Storm, forever hereafter referred to as NUNS). I think the general exuberance brought around by the IP helps make this game a tremendous amount of fun. I definitely see myself playing this with other people first and foremost, though. I'm not sure how much game time I'll devote to it on my own.

D: I've been waiting for months for this to come out, and they really timed it perfectly with the release of Part Three's anime. The game is gorgeous, and the fights are fun not only to play, but to watch. I kind of wish Story Mode went a little more in-depth, or maybe had some cutscenes to show off more of the graphics, but other than that the game is awesome. I agree with Baker and Nate in that it's better with other people, but I'm finding myself more frequently sitting down on the couch to get a few rounds in alone.

N: All right, that should be it--thanks again, guys! But first...

+ Stunning visuals are like the manga brought to life

+/- Huge cast, but some unexpected choices and omissions

+/- A variety of unique character mechanics, but they're explained pretty poorly in-game

- Story Mode is short and kind of repetitive