BONES president Masahiko Minami talks about the past, present and future of the studio 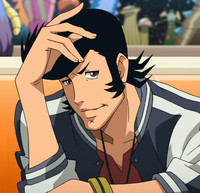 Some of our colleagues from Germany attended the Animagic, a convention taking place in Bonn, Germany's former capital, every year. Apart from the Attack on Titan panel with producer George Wada, BONES president Masahiko Minami also paid a visit to our Middle-European friends and had quite a few stories to tell out of BONES' 15-year history. 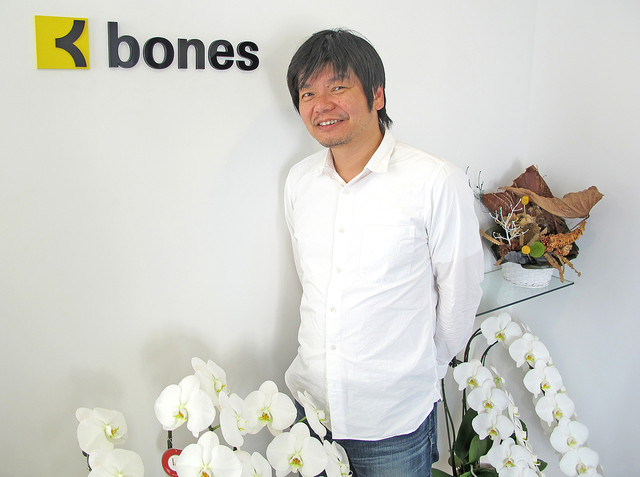 The panel started off with a short trailer showcasing every title BONES had produced so far and Minami commented on how overwehelmed he himself was by the amount of shows they already had created. After a short introduction of himself and showing some photos which were taken during the production of their current show Space Dandy, Minami shared his story of how BONES came to be in the first place.

He told the audience how, during his time at studio Sunrise, he nurtured the wish to work more closely with his animators. Out of that wish, he decided to found his own studio. At first, there were two sub-studios: one for TV shows and one for feature films. They started off with the second half of Cowboy Bebop which he basically took with him when he left Sunrise, also leading to the desire to turn Bebop into a movie later on. He also pointed out just how much focus on a male audiences the studio had at the beginning, featuring mainly Mecha and Action shows, and how much of a breaking point Ouran High School Host Club was for them, as it opened them the door to more diversity. Minami liked Ouran a lot due to its focus on the family aspect,a theme which he saw in many of BONES' productions, but held onto his actual favorite Ghost Slayers Arashi.

He then continued with anecdotes from the productions of particular shows, starting off with Eureka Seven. This show was quite special to him as his affection for the Gundam creators practically spawned his desire to work in animation and with Eureka Seven, he wanted to create something that was at least on par with this franchise. He further noted, how the production team behind Bebop had been all from the same age group and that they had come to the conclusion that this led to a certain kind of harmony and enabled them to produce such an amazing show, which is why the staff for Eureka also consisted of people the same age. Yet, he confessed that he was slightly embarassed of the love theme of the show and that without his colleagues, it probably would have been far less romantic in tone.

Minami continued with Xam'd: Last Memories, which he considered a milestone due to their collaboration with Sony and the resulting release on the Playstation Network. The ability to show his production to people on the entire planet at the same time really motivated him to put his all into it, but this also caused a much greater disappointment when the show was delayed in other countries up to a year.

Tokyo Magnitude 8.0 was the first BONES show without any kind of Mech or Fantasy elements, facing the team with the challenges of a real-life setting. He described it as a very important experience, especially since the production team walked the entire way, the children in the show travel on, by themselves.

After stressing the long runtime of Fullmetal Alchemist: Brotherhood, Minami went on with Sword of the Stranger, a feature film, which he financed with his own savings, resulting not only in himself being very proud of it, but also stepping quite a bit beyond the boundaries of the allowed production costs.

He briefly described Eureka Seven: Astral Ocean as a form of transition to Space Dandy, as it basically introduced the concept of multi-dimensionality and the resulting returning of deceased characters for their studio.

His narration became a bit broader with Heroman, a show produced in collaboration with Stan Lee. He covered their disputes regarding the design of the show's mechs as Minami wanted them as slender as possible while Lee insisted on big, heavy robots. Minami explained how this story greatly shows that the Americans "tend to be machos" and how he made the mechs in Star Driver especially slender as a compensation.

After showing his grave disappointment that no German publisher had picked up Towa no Quon, he went on to Captain Earth. He showcased the show's question of "Can a mere High School boy really become a true captain?" [as in Captain America] and stressed, that the Mechs were drawn analogically on cels, a process rarely used in today's animation process, yet they also used it for Space Dandy.

He started off his section about Space Dandy with an excuse because the first episode was so "special" and asked the viewers not to be deterred by it, especially the female ones after hearing Dandy's introductory monologue. He and Shinichiro Watanabe wanted to create a show that would be entirely different than anything that is popular at the moment. They had met up regurlarly after Bebop, through which they had become good friends, and he told the audience how hard it was to restrain their ideas in order not to alienate the viewers with their "strangeness". But he was glad that they could go all-out with season 2 since he assumed that the viewers would be accustomed to it by then. He further noted that they actually encouraged their animators to work as freely as they want which resulted in some employees not even looking at the character sheets, leading to some heavy alterations in designs between different episodes, e.g. the length of a character's hair.

At the end of his presentation, he emphasized that he intends to work as closely with his animators as he has up until now. He also announced that BONES will release 3 adaptations as well as one original show in 2015 as well as expressing his wish to produce a Space Dandy movie should the TV series become a success.

During the Q&A part, he stressed how much he would love to produce more material for Soul Eater and Eureka Seven but that there are unfortunately no plans currently to do so, especially considering how hard it would be to write more stories featuring Renton & Eureka. He also explained that he could not produce anything related to The Vision of Escaflowne due to Sunrise possessing the rights to it, yet he is always happy when someone mentions it to him because of such an old production of him still being relevant today. He further showcased his great interest in simultaneous releases worldwide and would love if international releases like with Space Dandy could become more common in the future.

He finished his panel with declaring his love for Germany, emphasizing how much better their beer is than the Japanese's and that he would love to visit it more often but pitied that his occupation rarely allows him to. He admires the passion of the German fans and left while expressing his hopes to produce more great shows so that he could show them at his next visit.