History? What history? Legends from the DYNASTY WARRIORS and SAMURAI WARRIORS franchises collide! 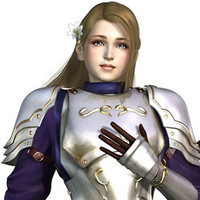 As you may have seen in the Dynasty Warriors: Gundam Reborn review, I'm coming off a very long break from Omega Force and Koei Tecmo's Warriors franchise--the last game I played in the series was Samurai Warriors 2 on PS2 (and briefly on Xbox 360 to marvel at the then-amazing next-gen graphics). It's funny how cyclical gaming can be, because now, here I am playing Warriors Orochi 3 Ultimate on a PS4 specifically to marvel at the amazing(ish) next-gen graphics. I'll talk more about that later, but the real surprise is that under its been-there, done-that a thousand times before exterior, Warriors Orochi 3 Ultimate finds some pretty smart ways to keep you carving your way through armies of demons. 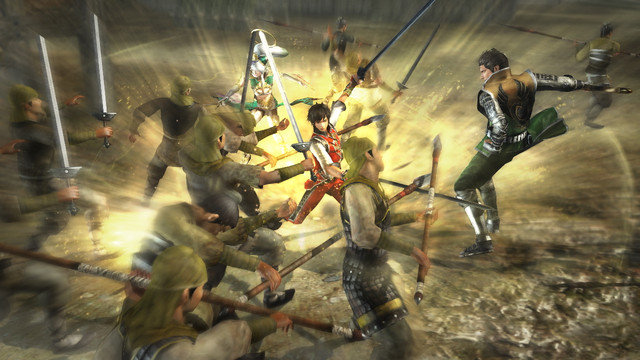 Warriors Orochi is a dream-team series that mashes together the Dynasty Warriors (Sangoku Musou) and Samurai Warriors (Sengoku Musou) franchises, along with mythological figures like Kaguya, Sun Wukong and Minamoto-no-Yoshitsune. Instead of fighting each other, they're all teaming up to take on the demonic threat of Orochi. Warriors Orochi 3 Ultimate starts at the big final battle with Orochi's monstrous Hydra, where all the good guys get their asses kicked and it looks like the world as we know it is doomed. Using Kaguya's time-travel abilities, our heroes have to jump back and forth through time to recruit the absolutely ludicrous 145 playable characters so you have the biggest possible army to fight and defeat the Hydra. You're now fighting in teams of three, so your characters can be switched on the fly in combat, or combined for massive triple-team specials. 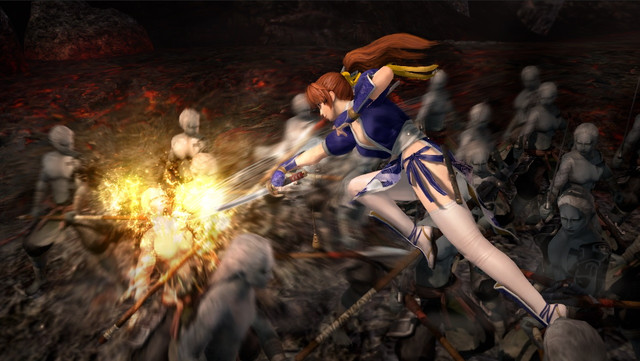 The sense of scale in this game is great--battles are enormous, throwing loads of enemies at you. Playing this game is like a meat grinder, with developed characters felling 50 enemies in a single swing. It can get a little mashy, and you'll probably do your best CholeraNinja impression while you're at it, but I can't say that the Warriors games aren't skill-based--the series is really all about prioritization more than anything else. You can wander around and slaughter soldiers by the hundreds, but the allies you're supposed to protect will get overrun in no time if you don't even try to help. You also can't let your guard down--every now and then, you'll run into a random general who can kill your high-level characters in a single neverending juggle. It's real surprise that comes out of nowhere and makes you (well, me) want to immediately jump back into the battle and redeem the loss. 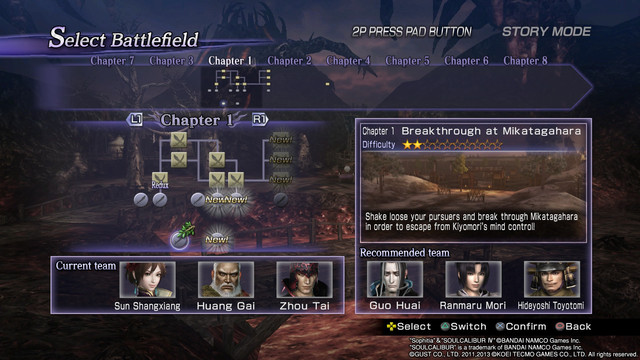 It's pretty important to bring up that WO3U's time-travel elements are pretty key to how you enjoy the game. In an early mission (in the past), a general is killed during a battle--it seems like part of the story, completely unavoidable. However, if you go farther back, you can secure allies and equipment like catapults to help turn the tide of the battle and make sure that the general survives... and contributes to the battle against the Hydra. Each chapter becomes a branching tree of different battles that can affect each other by changing certain circumstances, adding new generals, or removing formerly insurmountable obstacles. By running around your base camp as different characters and talking to your allies and clearing challenges, it opens up even more battles--more chances to change the present by fixing the past. As you clear more missions and increase the size of your army, your base camp expands to include a Teahouse, where you can throw bitchin' keggers and raise your BP (Bro Bond Points), strengthening the bonds between you and your allies. 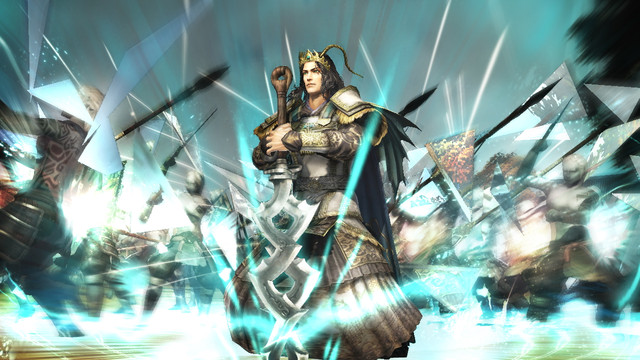 Like other Warriors games, there's a crafting system to develop weapons with the traits you want: elemental strikes, healing, increased damage for team attacks, or just plain higher damage. You're given quite a bit of loot for each battle, almost too much to keep track of. Story Mode isn't even the only place to get loot and fight it out--here's a quick rundown of the other modes. FREE MODE is exactly what it sounds like, letting you replay battles on maps you've completed, with any and all characters you've unlocked. MUSOU BATTLEFIELDS lets you edit a stage and its win/loss conditions, which you can play and share with friends. DUEL MODE is a three-on-three fight to the finish in a small, enclosed area with online or offline play, where you equip your three-man team with Strategy Cards to give certain bonuses during a match. Finally, GAUNTLET MODE has you pick a team of five (that you can freely switch between) to clear map-specific conditions and activate checkpoints on a map called Dragon Portals. Of these, Gauntlet Mode is probably my favorite, since it's objective-based and has you constantly on the move, and constantly switching between characters to make use of their individual abilities. 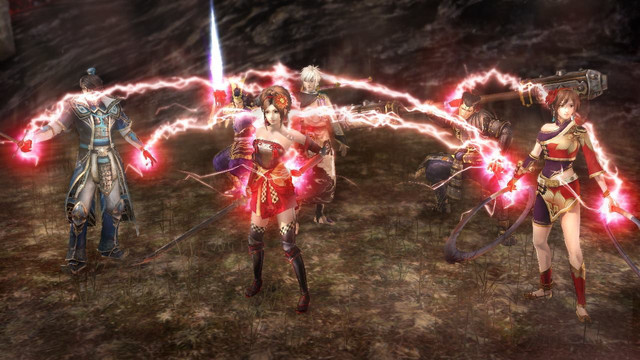 Overall, Warriors Orochi 3 Ultimate is enjoyable and fast, but it's plagued by some unexpected, sometimes kinda dumb issues. When you lose a battle, you're dumped out to the main menu instead of getting an option to retry. Getting that option, or even just being sent back to your base camp, would be a better option than having to go back to Story Mode, and then run around the base camp talking to everybody, and then doing your battle prep, and then doing the battle all over again. Also, the draw distance is pretty disappointing--I would have been okay with less-detailed character models just so you can see farther down the horizon and get less random pop-in, especially when you're taking on large crowds. 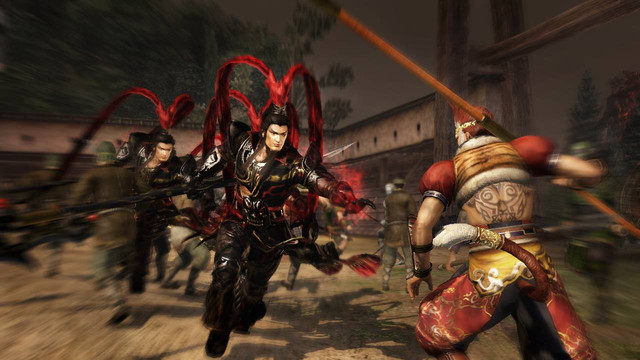 When a single Lu Bu is not enough! That's just not cool

My long break from the Warriors franchise was probably for the better--I'm seeing a lot of changes to the now-standard formula of the series, far removed from slight roster adjustments and mere graphical improvements. Taking the dopey-sounding time-travel mechanic and actually making it important to gameplay, along with the insane sense of epic scale, helps elevate Warriors Orochi 3 Ultimate to more than just a fun weekend. Seeing what the series has come to in all the time and through steady incremental improvements, y'know what it really makes me want? A next-gen Earth Defense Force.

+ A LOT to do--the main story branches off to side missions, which branch off to fixed-timeline missions, and more

+ Actually forces the series' "prioritization" mindset into gameplay, forcing you to drop what you're doing to save allies (in a good way!)

+/- Even with improvements to gameplay and impact, it's still a Warriors game--if you don't like 'em, this won't sell you on 'em

+/- It's great to see so many characters on the screen at once, but draw distance is terribly short and overall visuals are kinda bland

- Stupid UI decisions like booting you to the main menu after a loss, and occasional rubber-band AI bullshit