HOLD IT! Phoenix Wright is back in a not-quite-new collection of his most classic adventures! 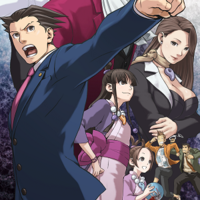 Nearly ten years ago, the western world was first introduced to Phoenix Wright, the plucky young defense attorney with a keen sense of justice. His adventures on all sides of the law would go on to become surprising cult hits and spawn numerous sequels, spinoffs and (most importantly) copious memes. Now, in true Capcom fashion, Phoenix's first three outings have been collected into a sort-of budget re-release on the 3DS in Phoenix Wright: Ace Attorney Trilogy. But do these aging titles hold up today, or is Capcom once again guilty of the nefarious crime of franchise milking?

It's a bit awkward to write about a collection of games that are nearly old enough to drive (remember, the original Gyakuten Saiban was released on the Gameboy Advance all the way back in 2001!) Chances are the majority of people out there have already formed some kind of opinion on the games in question, whether they played the originals or not. So first, let us address the legal veterans, those cagey defenders of the innocent who have been down this road before and are wondering whether or not Ace Attorney Trilogy is worth their time and money. "Impress me," they say, "show me what's new!" 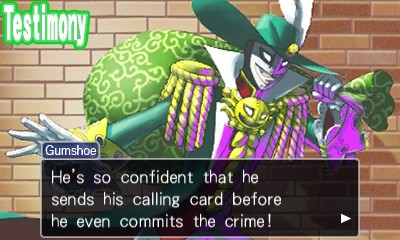 Er...right...what's new. Not too much, I'm afraid. There are, in truth, only about two or three major differences between the original DS ports and this new 3DS collection. Exhibit A: All of the in-game graphics and menus have been redrawn and scaled up to account for the 3DS' larger screen and greater graphical processing power. It's not the biggest change in the world, but the effort should certainly be appreciated, as the game is much less pixelated, and the hand-drawn scenery is able to remain good looking even on the 3DS XL's mammoth screens. 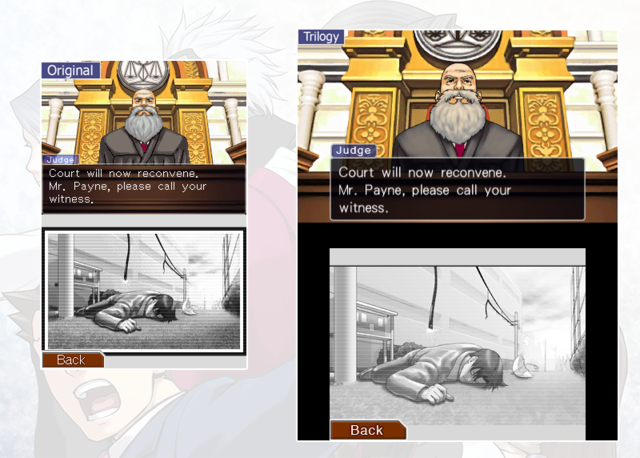 Besides the retouched visuals, Trilogy also includes support for the 3DS' actual 3D function, and includes the option to play the original Japanese Gyakuten Saiban versions of all three games. For me, the 3D is negligible as a feature because it strains my eyes to look at, but I'm sure plenty of gamers out there will enjoy the gimmick. As for the Japanese versions, they're mostly pointless unless you can either read Japanese or are so intimately familiar with the story that you don't even need to read what's happening to succeed. Still, for real diehard fans it might be a fun addition, right?

So where does that leave longtime fans? Still in a pretty good position I'd say: there's any number of reasons Trilogy would warrant your purchase. $30 for three full games with the convenience of buying directly from the eStore makes Trilogy perfectly appealing as a replacement for old copies, or even to experience one of the older titles you may have missed when it was a new release. Still, there's very little in the way of actual new content, so if you've already got ol copies of all three games and you've played through them two dozen times each...maybe the investment isn't worth it to you. Give it some thought and decide for yourself whether Capcom is guilty of milking your wallet or not. Case dismissed! 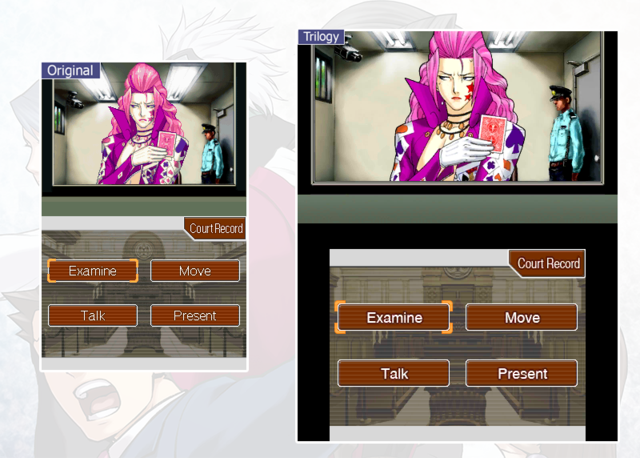 Now, to the newcomers, the legal neophytes, gather round and hear my words. You're in for a real treat here. I was like you nary a week ago, a young man fresh out of law school who had never before been tasked with defending a client in a murder trial. See, when the original Phoenix Wright games came out here in 2005, I brushed them aside as boring or not worth my time. Lawyers? Text adventures? There was no time for that, no sir. I wish I hadn't now, because oh how wrong I was. There's a real joy to the machinations of an Ace Attorney game; a refreshing fulfillment that comes from wracking your brain just enough to stumble headlong into the right combination of questioning and evidence to poke holes in a witness's testimony and reach a full acquittal for your client.

Let me rewind a bit. Gameplay in Ace Attorney Trilogy is broken into two distinct sections. There are times when Phoenix will need to go full-blown detective and investigate, navigating through menus to interview suspects and examining crime scenes with the 3DS' touch screen controls. Then, once the investigation has come to a close, it's time to enter the courtroom and cross-examine your witnesses, using collected evidence and tactful questioning (semi-automated through use of the "Press" command) to move the proceedings along. 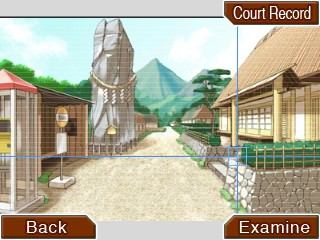 The investigation chapters can be fun, though they can also drag on a bit longer than one would like, sometimes forcing the player to resort to the tried and true "click everything and talk to everyone" strategy when the next step in your investigation fails to become fully apparent. However, when your brain starts firing up and getting to the root of the problem, it can be quite a bit of fun even with all the moving back and forth from scene to scene and witness to witness. It would be nice if the "Move" menu was a bit more streamlined, though...

The real fun starts when it's finally time to get into the courtroom and grill some witnesses. Phoenix (and you!) will need to keep on his toes and pay attention to plenty of little details to defend his clients, and each witness testimony makes for a fun new puzzle to figure out, with plenty of dramatic twists and turns in all the court proceedings to keep the "action" exciting. 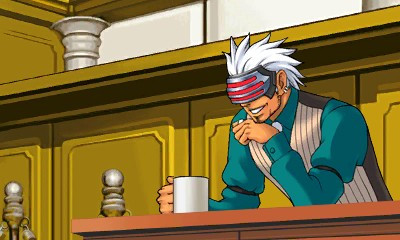 I'm particularly impressed with the way legal proceedings have been turned into a real "game" here. See, I watch a LOT of Law and Order with my wife, and when I was initially tasked with reviewing Trilogy, I confess I was a little scared of having to take on the role of a clever lawyer on par with those infamous New York District Attornies. Ace Attorney streamlines the process in just the right ways to make things instantly accessible while still remaining adequately challenging, and the difficulty slowly builds throughout each case. Limiting the courtroom gameplay to simply cross-examining (you never really have to fend off Edgeworth's underhanded prosecution or know much about real law) is a bit of genius, even if the story sometimes dances around some of the more intricate workings of the legal system. It's a "lawyer game", with heavy emphasis on the "game" portion.

Though it's possible to "lose" in Ace Attorney trials, doing so can prove surprisingly difficult. You sometimes lose favor with the judge for presenting foolish evidence or making baseless claims, but typically the game will manage to corral you into asking the right question or presenting the proper evidence when it matters most. It can be a little disappointing to ask the right question only by process of elimination, but it does save time on retrying when the next step isn't quite clear, so I do appreciate that aspect. 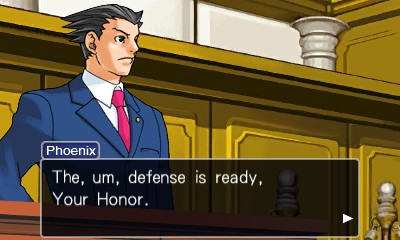 Like the gameplay, the world and characters of Ace Attorney are colorful and supremely likeable, and the dialogue written for them is often funny and entertaining. Phoenix Wright himself is especially enjoyable, and I really felt a kinship to him as we bumbled our way through case after case, always snatching victory in the eleventh hour. His mannerisms and embarassment reflect the player's every time he's confronted with a new twist in a case or makes a silly, baseless claim. It's subtle, but it's a nice attribute for a game like this to have.

The extravagant, overblown characters rounding out the rest of the story are a treat as well, and watching a witness implode on the stand is both satisfying and endlessly entertaining. I will say, however, that I'd sometimes love to strangle the seemingly empty-headed judge who presides over each and every case. He's clueless, and you would think the common people would have elected someone slightly more qualified to fill the position...

B-but anyway! There really is a lot of intelligent fun here if one is willing to embrace a game lacking all the gun-shooting and monster-stomping that typically makes up the bulk of other games, so don't be a fool like my younger self and write Phoenix Wright's adventures off as boring, because they are so far from it. 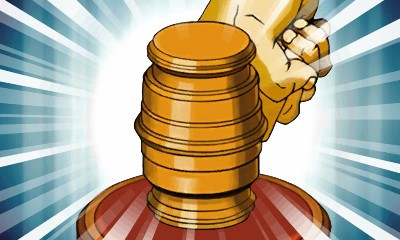 Ace Attorney Trilogy is ultimately a weird sort of package when you get down to it, though. It's incredibly convenient and and cost-friendly to series newcomers, and makes for a great trip down memory lane for anyone who enjoyed these same titles in the past. Unfortunately, there's a real lack of new content to help warrant a purchase if you already have the old DS versions. Even so, that shouldn't detract from the fact that these are great games deserving of a playthrough by anyone who enjoys a good brain-teaser now and then... plus, $30 for three whole games is almost criminal.

+ Solving cases and defending clients is pure joy, as you'd hope it'd be for a game like this

+ A colorful world and likeable characters pull you into the action, and solid writing will keep you invested

+/- Updated graphics are nice, but it would've been nice to see more real content for returning fans