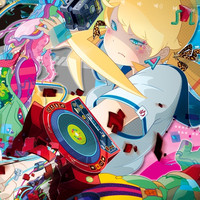 Hiroyuki Takahashi is a Japanese artist whose eye-popping work is supercharged with the influence of anime, manga, and the wild energy of the Tokyo club scene. Now… he’s coming to Crunchyroll for a series of exclusive new projects! 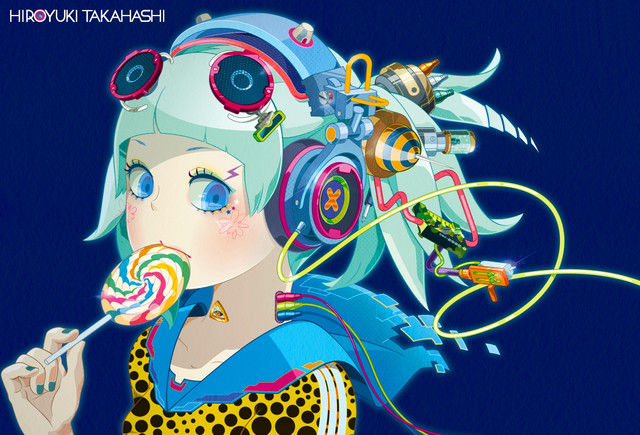 Crunchyroll News will reveal the exact details of the collaboration next week, but as part of the rollout, we’ve asked Takahashi to use his boundless imagination to dream up his own interpretation of our famed company mascot, the Crunchyroll Hime. The results are sprinkled below, along with an interview and bonus image galley of his works. Enjoy!

Crunchyroll News: How would you describe your art to someone who had never seen it before?

Hiroyuki Takahashi: I draw colorful, detailed cyber characters using the path function in Adobe Illustrator, which is not a common way to make an illustration. 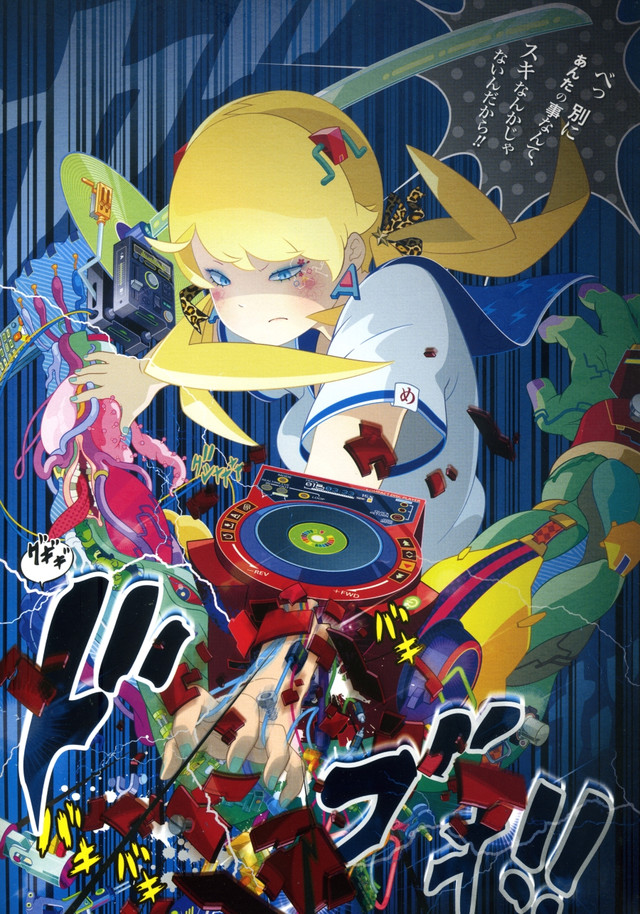 When did you start drawing? What has your evolution as an artist been like?

I like drawing, and have been drawing since I was little. In elementary school, "becoming a professional illustrator" was already my dream. My father was a carpenter, so I was interested in making things in general. For that reason, I went to an industrial high school, instead of design school. I studied machinery during high school and that is why my art work has technology and cyber elements. After I graduated high school, I went to a design school that had computer graphic class and I learned digital illustration. That was my first time to even touch a computer!

When I became 20 years old, I started to go to music clubs. I started doing stuff like live painting; graffiti, art and dance, and I began to strongly feel the connection between music and art.

After I graduated design school, I started my career in a design company.  I also started working as a freelance illustrator around the same time. I'm an independent illustrator now.

I went to Paris to present my fashion work, and it was there that I realized how attractive Japanese manga and anime are around the world. I am very willing to work and present my works abroad. 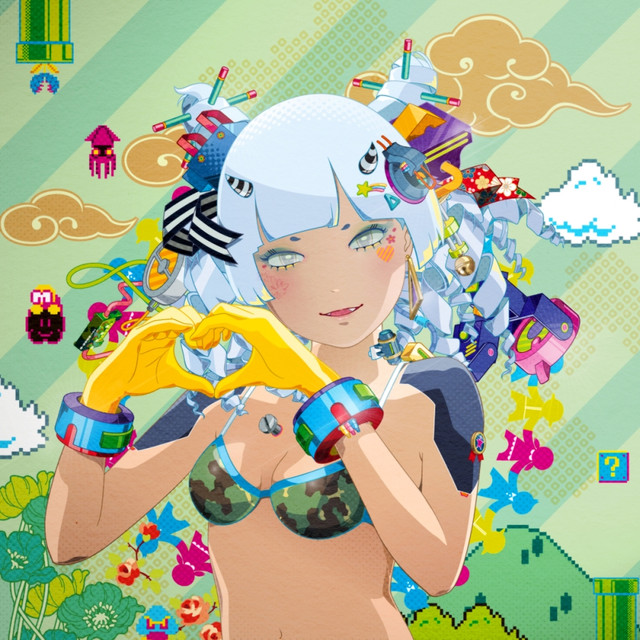 What’s the process you use to make one of your illustrations? Can you walk us through the steps one by one?

First of all, I build an image in my mind. I search for interesting images on the internet or listen to music... I do all sorts of things to come up with an idea. Once I get an idea, I start sketching on a sheet of paper, and finish a draft rough version of a character. I don't usually draw a detailed design at this point; I just focus on the overall silhouette for the image. 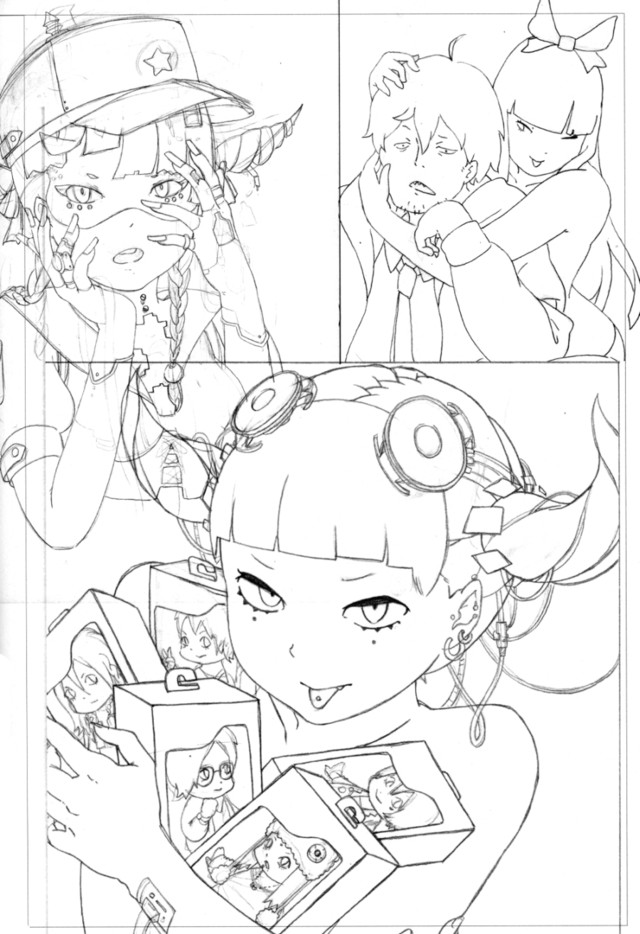 Then, I scan my hand drawn picture into my computer and trace the lines using the path function in Adobe Illustrator. At this point, I revise my sketch and add details, like small machine parts, and finish up my line drawing. Coloring comes after that. Since I paint in an anime-style, I pay close attention to overall balance and where the light source is. 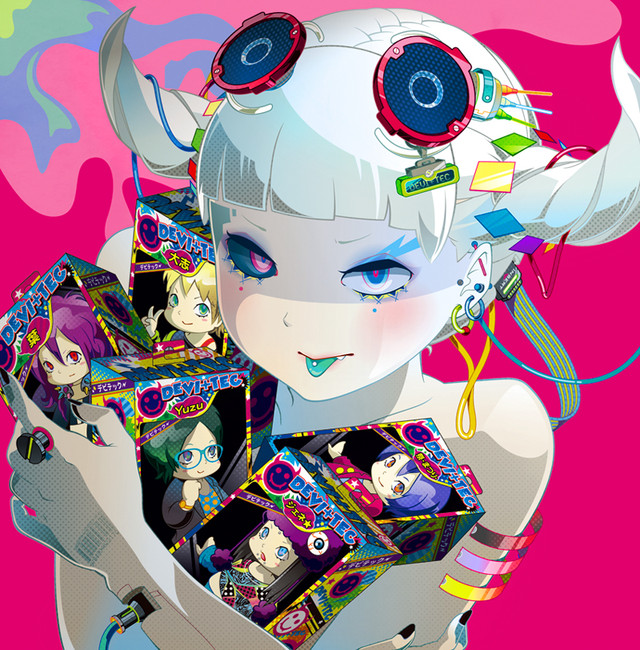 Where do you get the inspiration for your characters? Are they based on real people or other sources?

Basically, I don't use real people as a source. I do look at paintings by other artists, but I don't use them as a reference either. That’s because I want to draw "something I’ve never seen before”.

I'm not exactly sure where my ideas come from, but I try to see things as much as I can in my everyday life, such as walking around the city, try to look at things I'm NOT interested in, reading the news, listening to music, observing people in a club, and so on.

When I increase the amount of information in my head, an idea pops up. When it does, it’s like a bolt of lightning. I try to grasp on to that kind of moment, and to not to lose the idea. 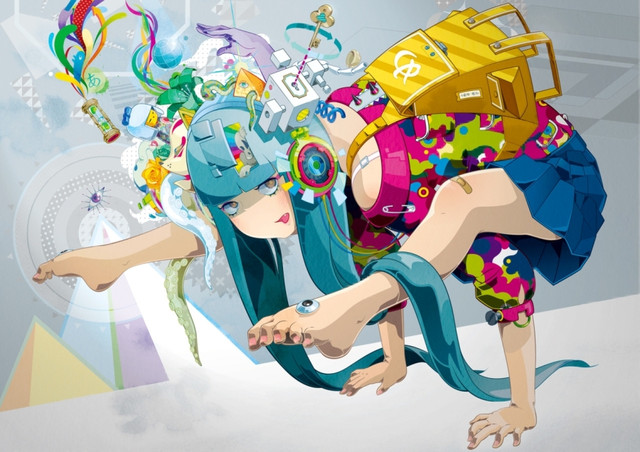 A lot of your art depicts cyborgs, or characters where the lines between human and machine have blurred. What are your basic feelings about technology?

There are always pros and cons, but basically I'm all for technology. I'd like to see it evolve even more. I would like to be a cyborg myself! (laughs) 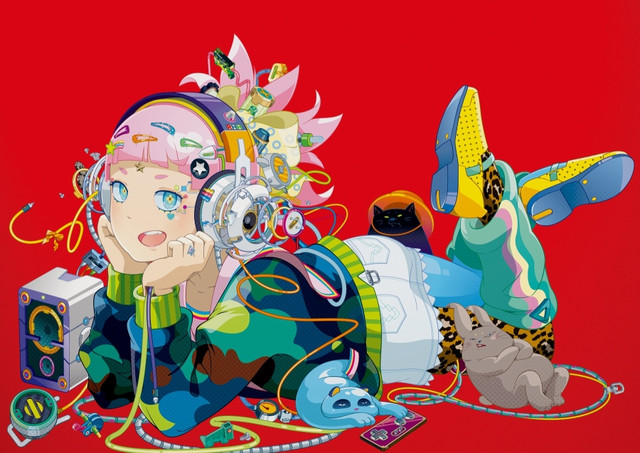 How much would you say anime and manga influence your work overall?

My art exists because of anime and manga. Japanese animation is a huge culture all over the world now, and it is a strong weapon that natural resources-less Japan can export. The reason why I can work abroad is that anime and manga are infiltrating the world. My art gets its identity because there are many anime and manga. 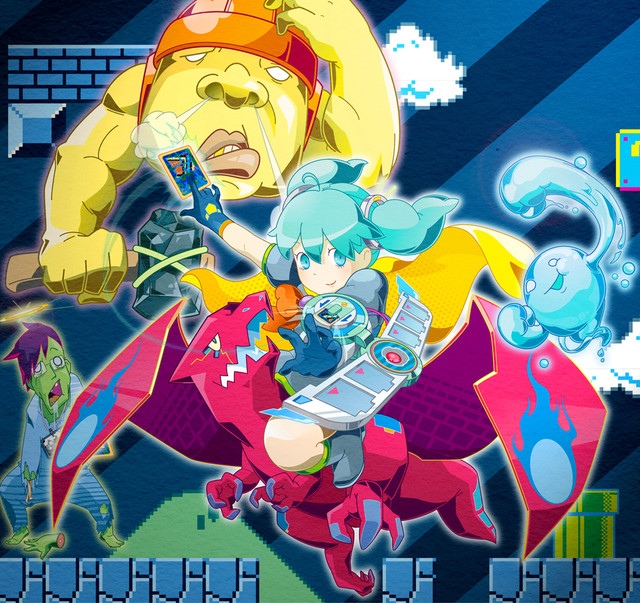 What are some of your favorite anime and manga?

There is a work which is influencing my art style now. That is AKIRA. I read AKIRA when I was in high school and really got drawn into the world, as I was studying machinery around the same time. I went on a trip to Paris when I was 20 years old and found some manga and figures from AKIRA. I still remember being surprised about seeing them and knowing that AKIRA was also a hit abroad.

One of my other favorites is Evangelion. It was very popular and a huge phenomenon in Japan. I was shocked by its story, setting and world view.

I also like American comics, (like X-Men) and graffiti art, so those elements are mixed into my artwork now. 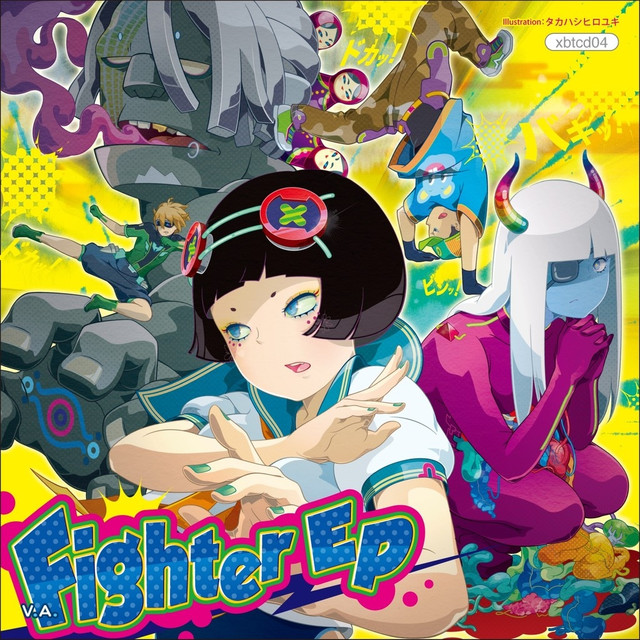 You have designed a lot of fliers for anime events at clubs in Japan. What are these events like?

I design fliers for Anison (“anime song”) events and techno club events. Anison events are when the DJ plays the opening and closing themes from all sorts of anime and the actual anime videos are projected on a screen. Voice actors and anime theme singers sometime comes to the events to do live performances. The audience does otagei style dancing and performance too. 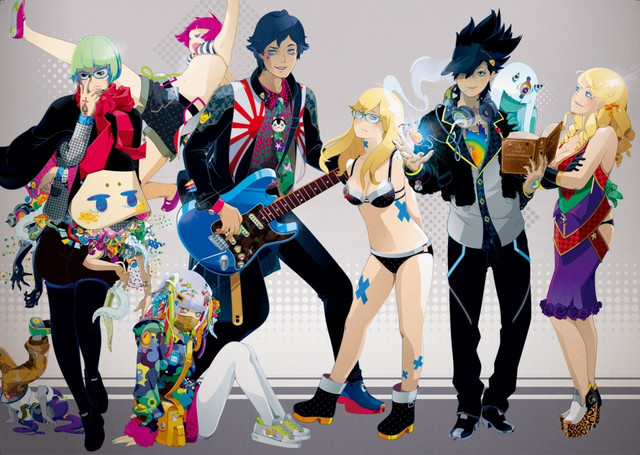 Music seems like a big influence in your artwork. Who are some of your favorite music makers?

I do play music while I'm drawing, but I'm not listening when I'm concentrating. I just feel the rhythm. 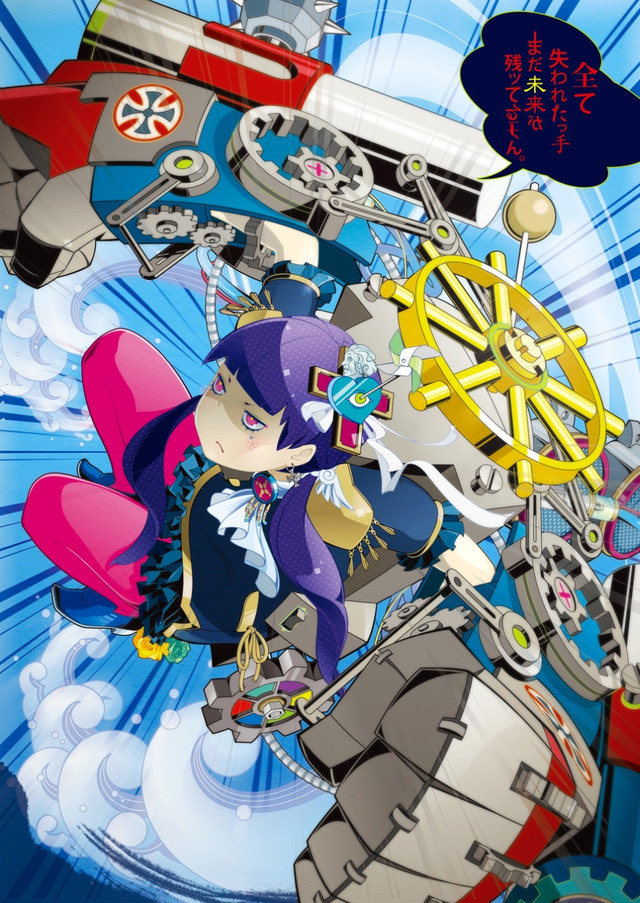 You visited the USA for the first time last year for Anime Expo. What did you think about the whole experience?

I really enjoyed the convention. I was surprised that anime that is popular Japan is also popular in USA without any time lag. I learned that good things are good, no matter where they come from, either Japan or abroad. And that made me feel confident.

My first impression was that the cosplayers were cute (laughs). I didn't know that there are so many anime and manga fans abroad, so that surprised me a lot too. I'd like to study English and communicate with fans directly. 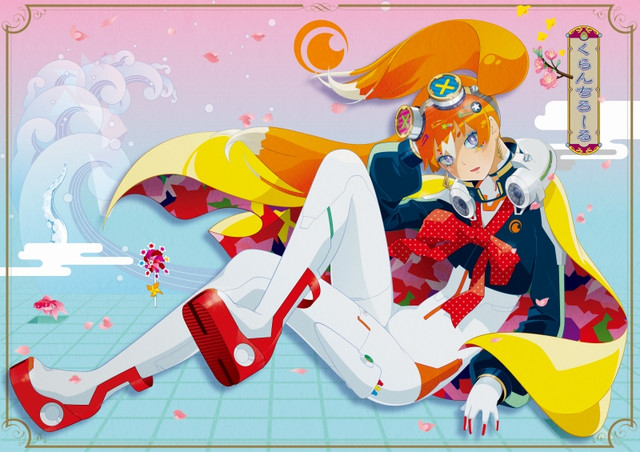 What can you tell us about the creation of your version of the Crunchyroll Hime? How did you decide on your approach to this character?

First of all, I wanted to use cyber elements, which I believe are part of my identity. Then, I wanted to add some Japanese taste to the design, so I thought about it for a while. The base design was a fox-tailed hairstyle, but I changed it to twin tail, because I think it represents a cyber-hairstyle. 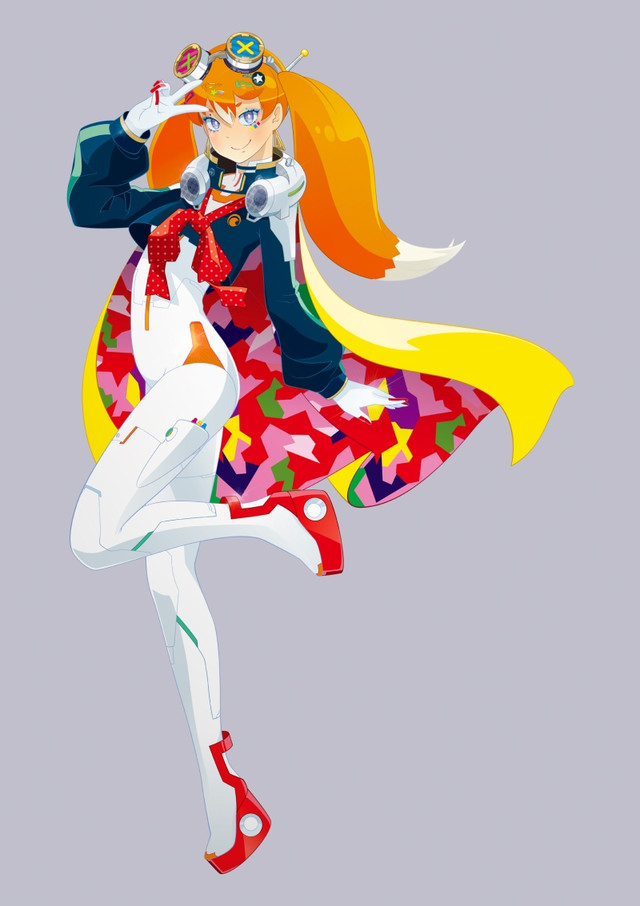 Without giving too much away, what can you tell us about your upcoming collaboration with Crunchyroll?

Right now, I'm collaborating with Crunchyroll to make some original content. It will be cyber and colorful, cool manga-style art work, so please stay TUNED! 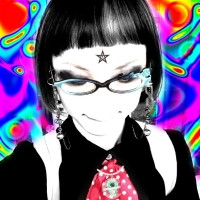 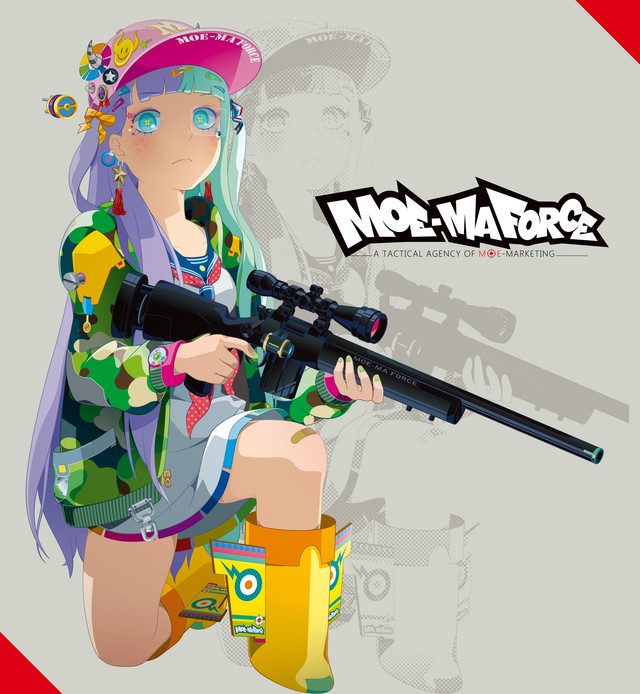 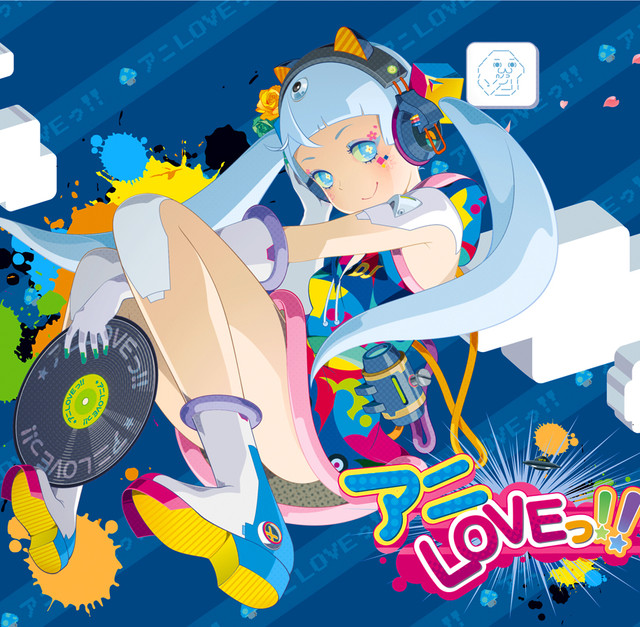 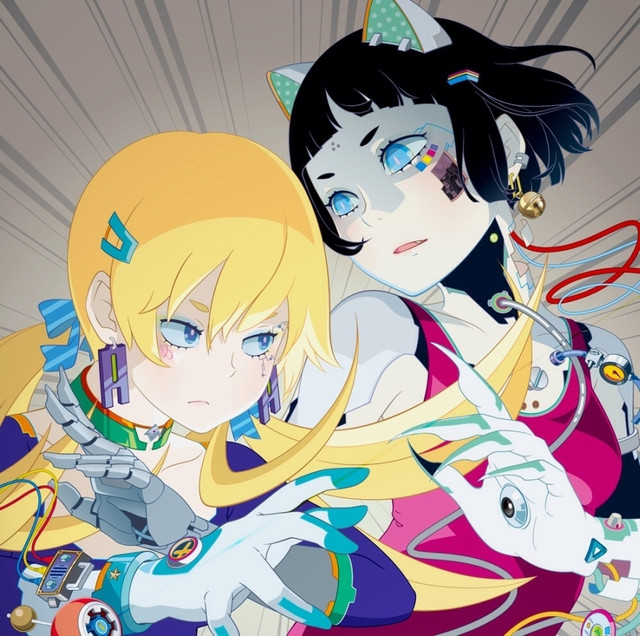 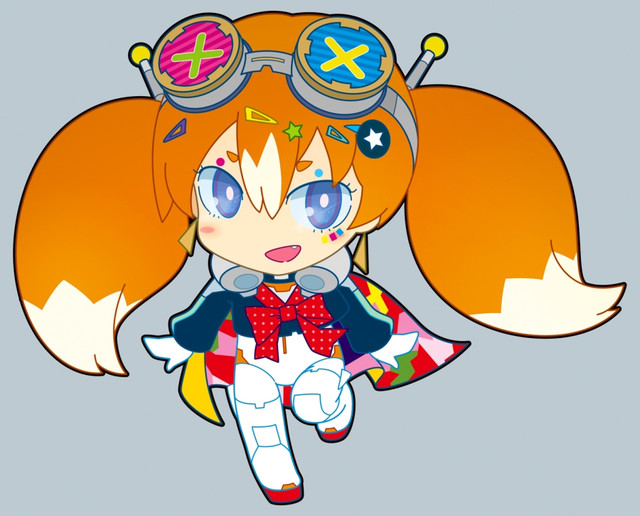 CR x Hiroyuki Takahashi collaboration details next week! In the meantime, let us know what you'd like to see him create next!

Patrick Macias is editor in chief of Crunchyroll News and Otaku USA magazine. He is also the author of Paranoia  Girls webcomic.