A look at XSEED's upcoming titles for the end of 2015 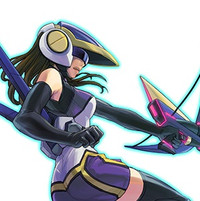 Last week, Crunchyroll was invited to XSEED’s Fall Preview Event showing off their lineup of releases for later this year. I had the pleasure of attending with my fellow video game enthusiasts to spend most of the day trying out each and every title they were showing off. After a day well spent, I share with you my experiences and impressions of the games XSEED has coming down the line. 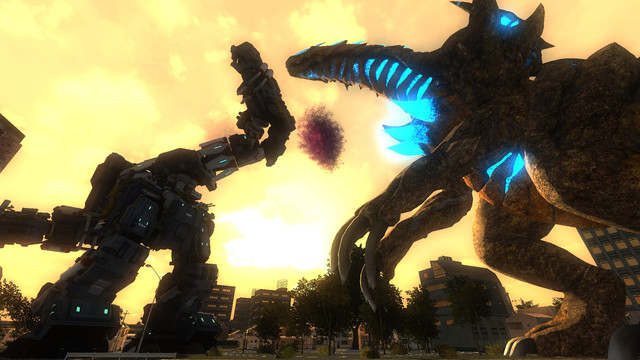 It’s difficult not to be a fan of the Earth Defense Force franchise, an ode to the monster movies of every nation and era of cinema, if it has terrorized a city on the silver screen, then it has found its way into at least one EDF title. Starting you off slow with giant ants, the game eventually has you shooting down UFOs, fighting dragons, taking on Godzilla in a Gundam, and battling the mothership from Independence Day. Gameplay in EDF has a satisfying “by any means necessary” mentality that allows you to take on these global threats in whatever way you choose, no matter the property damage or loss of life. If car-sized ants are swarming over a skyscraper, just blow the whole thing up. No penalties for exploding ants with civilians next to them, both are surprinigly durable anyway. The franchise is also known for its arsenal of monster-slaying weapons, numbering into the hundreds for each class and including everything from assault rifles to laser guns to power hammers. XSEED had two games on display that they are bringing to the US later this year. 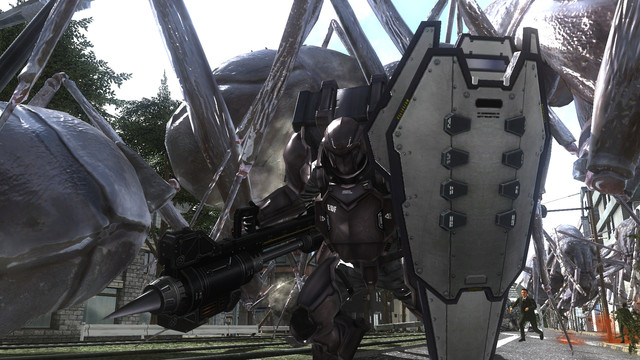 The first title I was able to get my hands on was Earth Defense Force 2: Invaders from Planet Space for PS Vita, a reproduction of Global Defense Force originally for PS2. While the title lends itself well to to the platform on its own, the multiplayer options are just the kind of short time commitment games that are perfect for a quick world saving during your morning train ride. EDF 2 includes up to four player cooperative and versus mode called Rumble available either locally or online. Although this is an older title and has more limited class and weapons options, I still can't help but be impressed they could compress a PS2 title with so many independent enemies into a handheld. Hope I'm not dating myself. 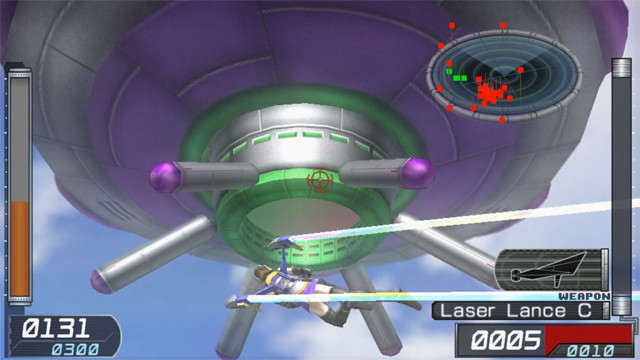 Earth Defense Force 4.1: The Shadow of New Despair for PS4 is a remake of Earth Defense Force 2025, the latest from the franchise. This title includes two new playable classes, the Air Raider and Fencer. The Air Raider has a number of more supportive weapons and the ability to call in vehicles and air strikes while the Fencer is a heavy-hitting soldier in a battlesuit. The Fencer was easily my favorite, being able to equip four absurdly huge weapons like a piston-powered spear and double gatling guns. This game features--gasp!--split screen multiplayer for two players and four player online multiplayer. Finally, this release includes some upgrades to the game to correct framerate issues present in the original release. The game is excellent when played seriously, but it’s just a fun to mess around. Ordering your soldiers to perform a coordinated dance routine is a good place to start. 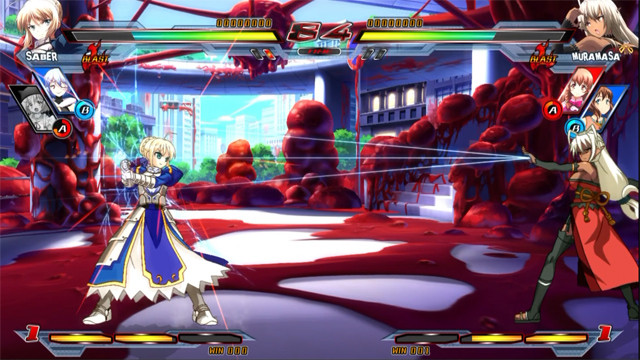 Next was Nitroplus Blasterz: Heroines Infinite Duel for PS3 and PS4 developed by Examu, the creators of Arcana Heart. A crossover fighting game, Nitroplus Blasterz features heroines from light novels and anime, some of whom should be pretty familiar like Aino Heart, Saber, and Angela Balzac. My initial impression of Nitroplus Blasterz was that it was an excellent balancing act between a competitive fighter and a vehicle for fan service. XSEED looks to be releasing the game with online support at launch and provide cross system play between PS3 and PS4. There are 14 playable heroines and a roster of 18 support characters from which you can select 2 for each match in the vein of Marvel vs Capcom. Each heroines' level 3 ultimates also feature 2D animated interludes, which add a lot of flavor to what appears to be a very solid fighting game. 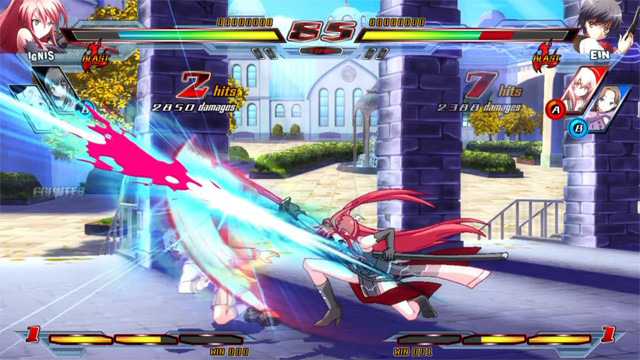 At its core, Nitroplus Blasterz is a high speed, mobile fighter reminiscent of Guilty Gear with purpose-built buttons similar to the Drive Attacks from Blazblue. Much of the mobility is tied to the Escape Action, a button primarily used to dash, like the roll command in King of Fighter, but can also allow for wall jumps and during blocks to block chip damage by expending ultra bar. The Heavy Action button lets you perform pushing attacks, sweeps, and can be held down to charge guard break attacks. I was really encouraged by the fact that each heroine’s kit had a strong identity, which was easy to see even while getting mercilessly crushed by our gracious host. A few of the characters were unavailable in the version I played at the event but, after my initial impression, I look forward to trying them out in the full release. 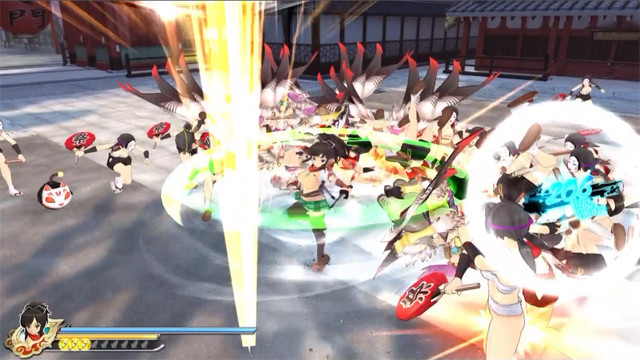 The Senran Kagura series has been something I've seen around the market but could never imagine myself playing, especially in public. I had to swallow my pride to try out Senran Kagura: Estival Versus for PS4 and PS Vita in a room full of industry professionals. Just the names of some of the missions had me looking around nervously for judgmental stares but, out of respect for my craft, I soldiered on. From what I was able to gather, the premise of the series is several rival ninja clans are vying for dominance by sending their high school age--I hope--female shinobi to do battle as their representatives, which for some reason is now occurring on a tropical island. Each of the girls sustains battle damage by having their outfit slowly ripped to shreds but can, kind of, restore their clothes by activating their Shinobi mode using the ninja scroll stored in their, er, hammer space to enter a magical girl transformation sequence and don their ninja outfits. Just reporting the facts, people. 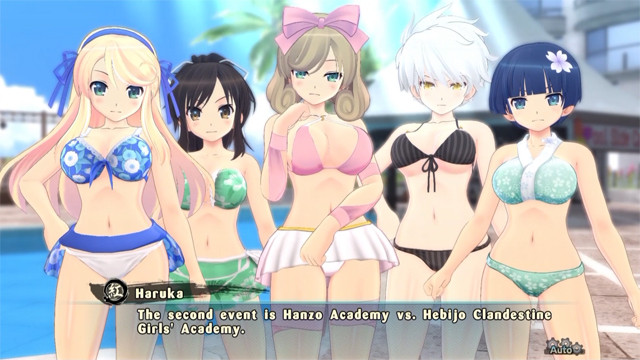 To my surprise, or perhaps dismay, I found the game was actually pretty fun. The gameplay is a somewhere between a platformer and the system used in Naruto Ultimate Ninja Storm. Tamsoft seems to have a love action perhaps equal to their appreciation for the female form, so the girls have fighting styles about as diverse as their, uh, personalities. In addition to a main story, Estival Versus also features a number of side missions for each character that provide a bit of character development. There is also a dressing room that allows you to modify the outfits of each character with hundreds of different clothing items and accessories. I was told the online multiplayer will allow for 5-player matches on the PS Vita and 10-player rumbles on the PS4, which sounds like has the potential to provide some ridiculous levels of... we'll say action. 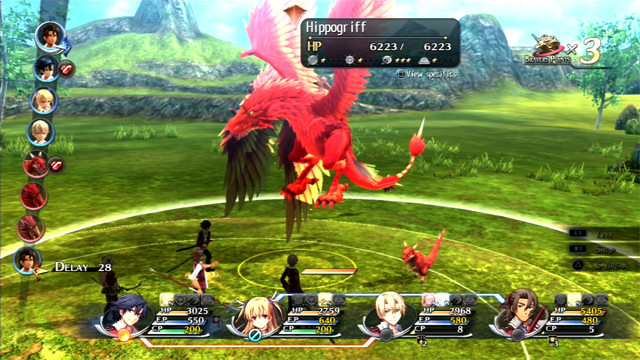 The Legend of Heroes: Trails of Cold Steel for PS3 and PS Vita looks like an excellent turn-based RPG featuring 3D fighting environments. Taking place in the The Legend of Heroes setting, Trails of Cold Steel mixes things up by focusing on the Erebonian Kingdom, which has traditionally been the antagonist in past titles. It follows Class VII from the Thors--not Thor’s--Military Academy, which mixes students from nobility with commoners in what has traditionally been a heavily segregated school. The military academy, world maps, and game system all give off a serious Final Fantasy VIII vibe while appearing to avoid much of the accompanying angst. My initial impression was that there is a great sense of history about the game with the opportunity for some great development being portrayed from the opposing side. 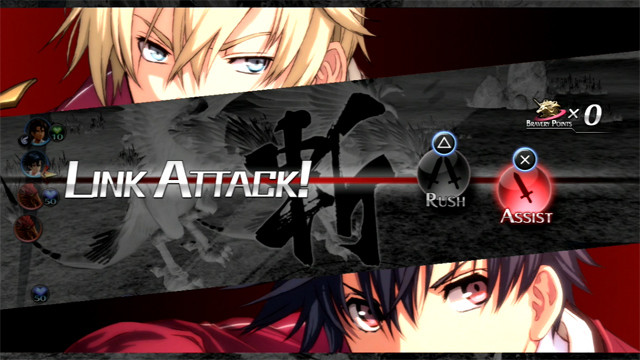 Since moving requires an entire action your character placement isn’t that important, but since most special attacks are AoE, you can take advantage of enemy proximity to strategically hit multiple opponents. The Tactical Link system lets you pair off characters, allowing them to follow up on each others attacks and defend or counterattack for them. In addition to your traditional RPG play, Trails of Cold Steel has some optional dating game-like elements that allow you to learn more about your classmates and build Link, increasing the odds of activating a Tactical Link ability during combat. Rather than an odious draw system, magic is taught in the form of both Arts and Crafts--which I hope was not lost on the translators--and more special abilities are provided by magic gems--essentially upgradeable materia--called Quartz. The Legend of Heroes is a huge name in JRPGs and Trails of Cold Steel looks to be a great narrative addition to the franchise. 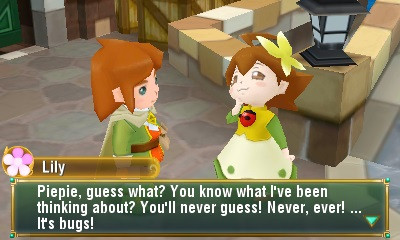 Last in the line was Return to PoPoLoCrois: A Story of Seasons Fairytale for 3DS, one of those charming handheld JRPG that continue to find success by featuring the idyllic worlds and classical, turn-based mechanics that hearken back to a simpler era of gaming. Prince Pietro, the hero of previous PoPoLoCrois titles, is magically transported from his kingdom to a mysterious alternate world called Gallery Land. In this world, a blight caused by a mysterious darkness is killing off the harvest and only Pietro is able to save the world by shrinking down to a miniscule size and destroying the cause of the blight. Originally possessing two different Japanese voice acting tracks, the US release will include a third English track along with the two originals. 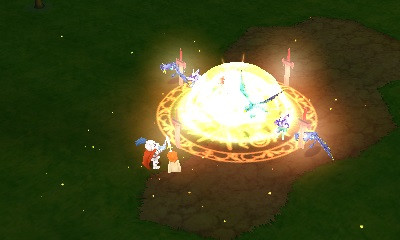 Like previous PoPoLoCrois games, this titles features a turn-based system in a 3D grid environment, which is where much of the strategy seems to lie, allowing you to surrounding enemies you want to prioritize and focus your attacks while keeping your weak or injured characters out of reach. As a Story of Seasons title, farming is also a large part of the game. While tied to the major thrust of the story and providing several farms, its use isn't strictly enforced and is much less punishing for the negligent, allowing you to use Fairy Dust in moments you are not in immediate danger to quick travel back to your farm for maintenance. Rather than killing your crops, failing to water them simply prevents them from growing until you get around to taking care of them. The main benefit of farming seems to be that it allows you to develop new equipment which, along with the inclusion of an item synthesis system that allows for over 600 possible items and a sandbox mode once the main story is completed, definitely give the player a lot to do.

In addition to the titles available for play, XSEED had some announcements for some PC titles coming up for release next year. The world-building, RTS title Little King’s Story, originally for the Wii, is seeing a new HD release for the PC early 2016. Following this year's release of Estival Versus, Senran Kagura: Shinovi Versus will also be seeing an HD release on PC from it’s original platform on the PS Vita in Summer 2016. Finally, Xanadu Next will be finding its way to the US on PC in Spring of 2016.

What titles are you looking forward to for XSEED's winter lineup? Let us know in the comments below!