FEATURE: Aniwords – One Punch Man and the Nature of Heroism

Justice Crash! One Punch! Whatever that thing Genos does is! 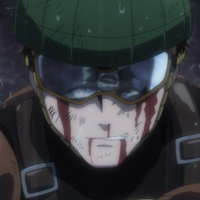 Back in the day, I was a big fan of the LEGO Company’s Bionicle line of toys. Like, I expect, many fans of my age, I was enraptured by the cool fantasy world, the ability to build and play with the characters out of the story, and most of all… the heroic Toa. About the time I was really getting into the franchise, LEGO started putting out some songs to go along with their toys, one of which was 2005’s “Hero,” by the band All Insane Kids. The lyrics of the chorus go:

Cue awesome guitar solo with the words “what it takes to be a hero” repeating in the background. Which all sounds pretty freaking awesome, but those who followed the Bionicle story are likely aware that being a hero in that world wasn’t just about being awesome. If being a hero was so easy, anyone could do it. You wouldn’t have to make a song asking if you knew what it took to be a hero—because we’d all understand what it was like to face down the evil external and our weak human hearts at the same time.

But we don’t know what it’s like. Not really. 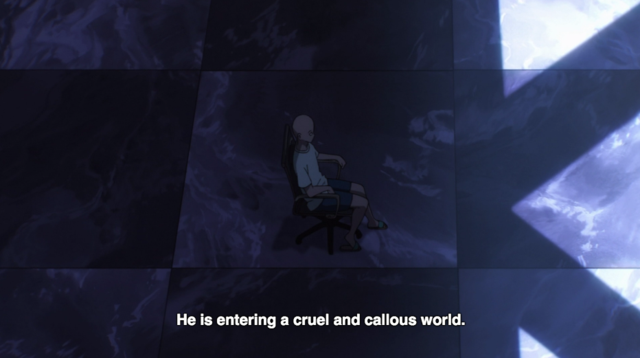 For eight episodes, One Punch Man has always sort of danced around this issue: what does it mean to be a hero? What are the qualities a hero must have? In other words, do you know what it takes to be a hero? In the world of Saitama, in a world where heroism has been commodified, codified, organized, and even divided into a hierarchy by social forces, the definition of heroism has become synonymous with a the Hero Rankings. Simply, the higher your rank—the more heroic you are. It’s appropriate that the good-looking, golden-toungued Amai Mask is the representative of this brand of systematized heroism—in this world, the only heroes are the ones who both look the part and act it. And it's as much an acting gig (the Hero Association notably interrupts his filming this episode to inquire his thoughts on the promoted Saitama), as it as a fighting one.

Episode 9 gives us all these pieces of the Hero Association’s “hero equation,” except in parts. Genos, the one ranked S-Class Hero of the group, seemingly has it all. He’s strong, he’s good-looking, he’s flashy, and is genuinely heroic. In the eyes of One Punch Man’s world, he’s the truest embodiment of what society has been conditioned to see as a hero. What Genos is missing, though, is achievement. Completion of the task. And, internally, he lacks the strength he desires—not for its own sake, but for a classic hero's noble cause. In many ways, Genos' lack of achievement is his own fault—he consistently tackles the biggest challenges due to his twin desires to do good and to catch up to Saitama. Of course, Saitama lacks Genos’ aesthetic appeal (andlet’s be honest, who really can keep up with Robo Hubby in that department?), but surpasses Genos in strength, achievement, and (perhaps even in) heroic spirit.

And then… there’s Mumen Rider. 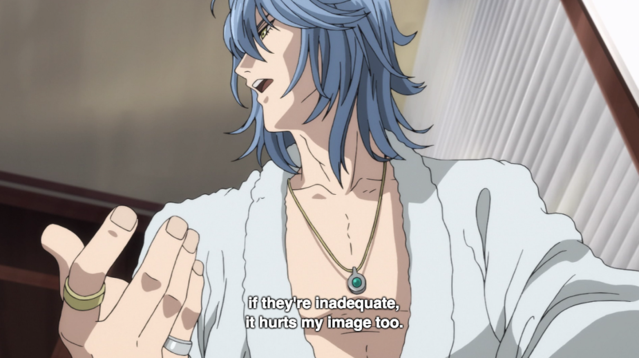 If Saitama and Genos almost have it all, Mumen Rider is the hero with almost none of it. He doesn’t have the looks—seriously, his costume is entirely dorky. He doesn’t have the power—he’s perpetually stuck in Class C and is hopelessly ineffectual again the Deep Sea King. He doesn’t even have the achievement—he knows he couldn’t make it in Class B, so he puts up with the weekly hero quotas in a system that will never really reward him for the work he does. All he’s got is what you might call the True Spirit of Heroism—the willingness to fight to save people, to put his life on the line, to do whatever he can as one who claims the title “hero.” This isn’t to say Genos and Saitama are lacking in this spirit, but with Mumen Rider it is crystallized and shines all the brighter for the lack of accompanying qualities. It is this spirit that drives him to fight even when he knows it’s hopeless. It is this spirit that compels him to sacrifice his own body for the sake of buying just a little bit more life for those people who can’t fight for themselves.

And we even see Genos and Mumen Rider, the two heroes to nearly sacrifice everything, paralleled in the way One Punch Man frames their defeats.

We know that these two heroes have truly done the heroic, and the show makes sure we don't value one over the other—it recognizes and lauds them equally. Does this then make Saitama less of a hero? After all, he shows up late, defeats the Deep Sea King without suffering even a scratch. The effort he expends in the moment is nothing compared to that of Genos and Mumen Rider. Those two knew what it took to be a hero. Does Saitama?

Of course, the answer is a two-fold yes. The first of these relates to effort. Although Saitama’s victory over the Deep Sea King does indeed make the efforts of all the other heroes look pointless, it bears remembering that Saitama trained for three years straight to become the hero he is today. His efforts are in no way inferior to those of his colleagues who must struggle on the battlefield. The second yes dwells in Saitama’s own version of the heroic spirit. Where the other heroes have sacrificed their physical lives, Saitama sacrifices his societal life (that is, his status) for the sake of preserving the reputations of the heroes who fell before him. 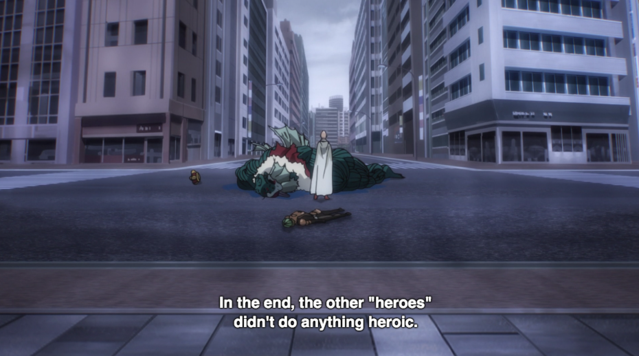 In a scene (complete with the laugh and the dramatic posturing!) that reminded me of a perhaps equally iconic moment in another show, Saitama takes on the role of public anti-hero. It’s a different kind of heroism, but to me it seems that Saitama’s motivation (especially considering his conversation with Mumen Rider on the bike) comes from a desire to preserve what he sees as the truly heroic in the face of the cynical public. The public doesn’t know what it takes to be a hero, and so Saitama—the guy who’s just a hero for fun—ensures that those who are heroes “for real” aren’t discredited or dishonored because of the ignorance of those outside of the hero lifestyle.

In the end, it seems that hope prevails. As is apparent by the crowd’s cheers for Mumen Rider when he arrives, his relative lack of external hero qualities have been more than compensated for by his heroic spirit. The people know him. They love him. Even if he’s not the most powerful or the most beautiful, they believe in him. As for Saitama, well, he’s likely always destined to be misunderstood by those outside—but the select few like Genos and Mumen Rider who take the time to look will understand.

Here is a real hero, too. 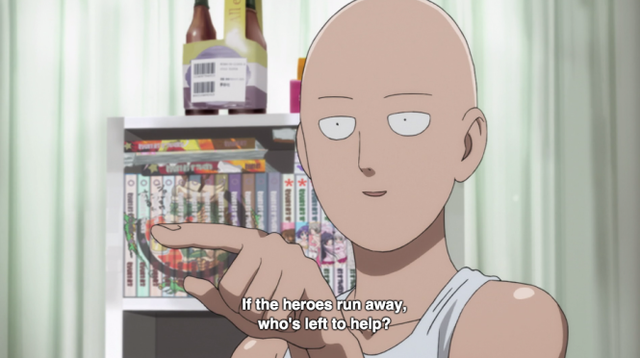